Some geographers argue that Shanghai, with its 80 million inhabitants, is now the biggest city in the world.
SIEPHOTO/MASTERFILE
Share
Share
The world now hosts more than thirty megacities—cities with more than 10 million inhabitants—a figure expected to reach fifty by 2050. CNRS researchers look at this important trend and its effects on our ways of life.

Is the city the future of humankind? Over the last fifty years, the urbanization of the planet has markedly accelerated and the number of city-dwellers now officially exceeds half of the world’s population. At the same time, a new kind of city has emerged: the megacity, an urban behemoth with 10 million people… or more. While Paris and London near 12 million souls, a conurbation like Shanghai is now approaching 80 million, thereby becoming—according to some geographers—the most populous city in the world, ahead of Tokyo. Although researchers do not agree on the order of the ranking, the world’s ten largest cities, which are home to dozens of million people, includes Shanghai, Guangzhou (Canton), Tokyo, Delhi, Mumbai (Bombay), New York with its 25 million inhabitants, as well as Rio and São Paulo in Brazil.

Size is a problem

“Urbanization is so intense that it has clouded the issue,” says Michel Lussault, a geographer at the Environment, City, Society1 laboratory. “We no longer know where places like Mexico City, Tokyo, or Shanghai—which bear no resemblance to what they used to be—begin and end…” Not to mention the fact that some countries overestimate or deliberately underestimate their size, whether for geopolitical reasons or to obtain international aid. In theory, the city is defined by the continuity of the built environment—the general consensus being that there should be a maximum of 200 meters between two buildings. Yet administrative divisions and the official statistics provided by countries follow an entirely different logic… Administratively speaking, for example, Paris is confined to the area situated inside the city’s périphérique ringroad, and is home to only 2 million inhabitants. 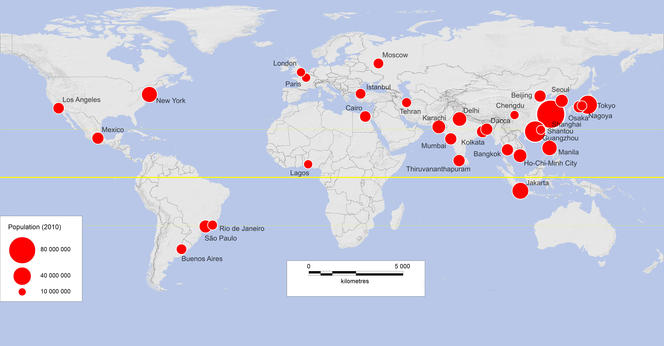 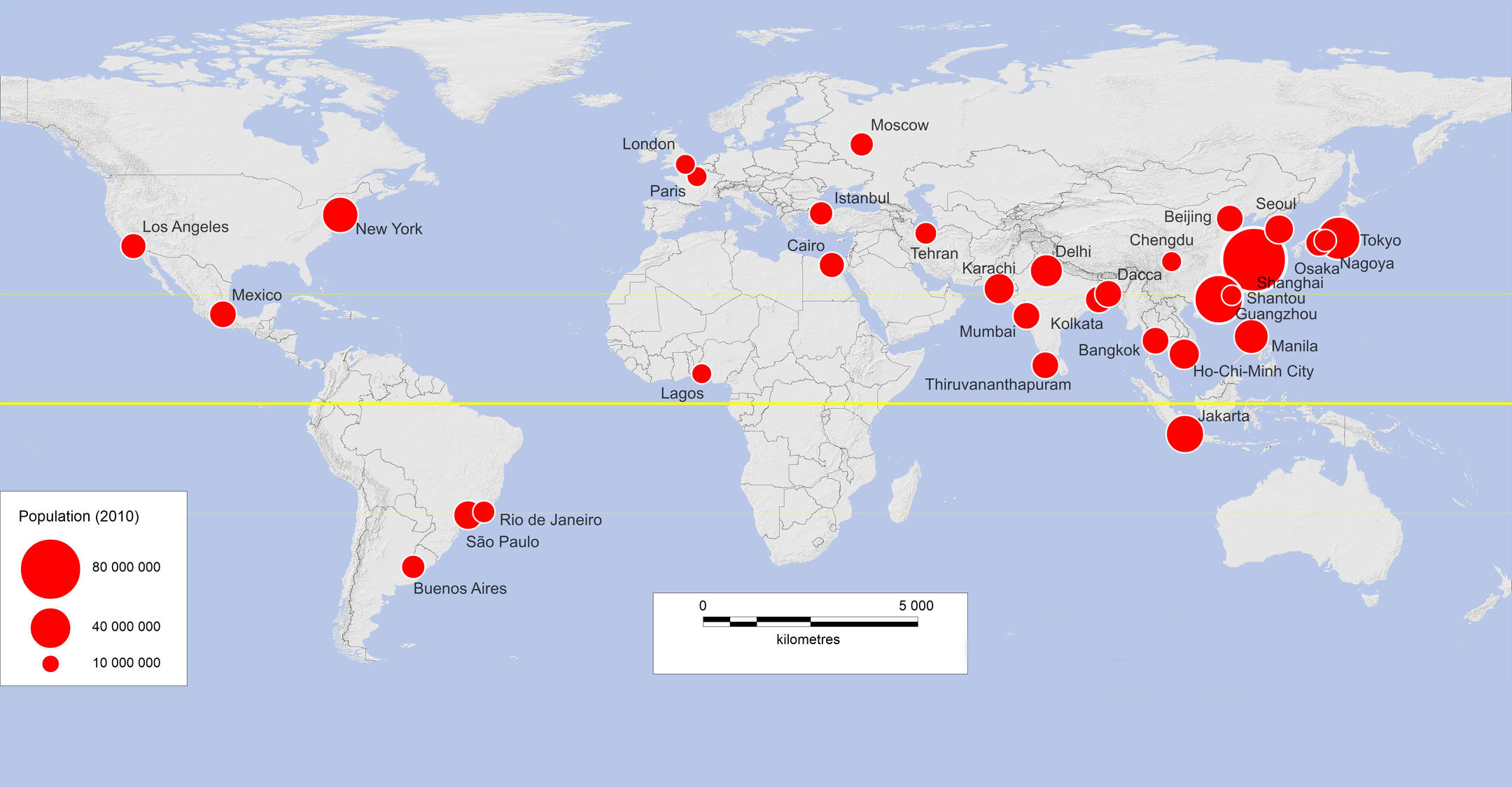 To circumvent this problem, the geographer François Moriconi-Ebrard and his colleagues at the Espace2 laboratory have developed a universal calculation method, applicable to all cities on the planet: “We use satellite images to delineate the perimeters of the city and we compare this with the census cartography, using the smallest units provided by each state,” explains the researcher, who has thus put Shanghai at the top of the list. All the data is stored in the Géopolis global database, which already heralds the megacities of tomorrow. Indeed, the trend towards urban gigantism is only just beginning! Numbering thirty today, megacities are likely to hit the fifty mark by 2050.

There is little point in looking for this next generation of leviathans in Europe or on the American continent. Asia and Africa are the places to watch. “China is the most populous country in the world, and it stands to reason that it will have megacities in proportion to its population,” predicts Denise Pumain, a geographer at the Géographie-Cités3 laboratory. Especially since the country is “catching up:" the requirement of holding an “urban passport” has been made more flexible, and Chinese citizens can now settle (more or less) where they want. “India and Africa are likely to be the next regions to witness an explosion of the urban population,” Moriconi-Ebrard adds. Already classified as megacities, Lagos (Nigeria) and Cairo (Egypt) will continue to expand, while cities like Kinshasa (Democratic Republic of Congo) and Onitsha (Nigeria) could soon go over the 10-million mark… “This is also the case of Addis Ababa, the capital of Ethiopia, which is literally exploding as a result of Chinese investments,” the geographer points out.

An economic and social innovation factor

As for knowing whether this urban explosion is a good or bad thing… Synonymous with pollution and insecurity in the eyes of the general public, megacities are viewed less severely by geographers, who prefer to highlight their undeniable advantages. “The days of the man-eating megalopolis are gone. In the poorest countries, they offer improved living conditions,” states Pumain. “Sanitary facilities are better than in the countryside, and infant mortality is lower. Similarly, the level of qualification of populations tends to increase as cities grow in size.” 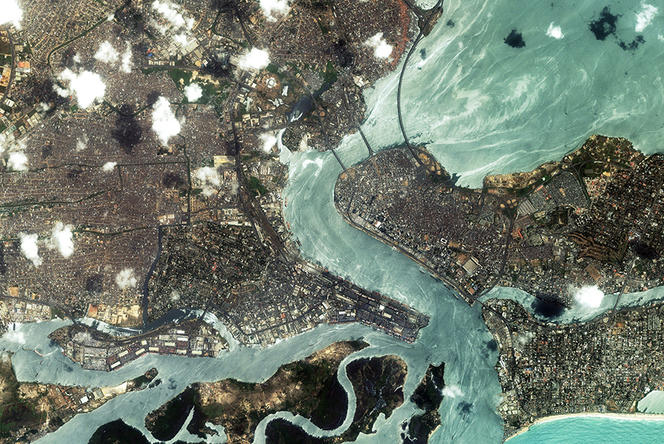 Along with Cairo, Lagos in Nigeria is one of Africa’s two megacities. It is predicted that Africa and India will be the next regions to rapidly urbanize. 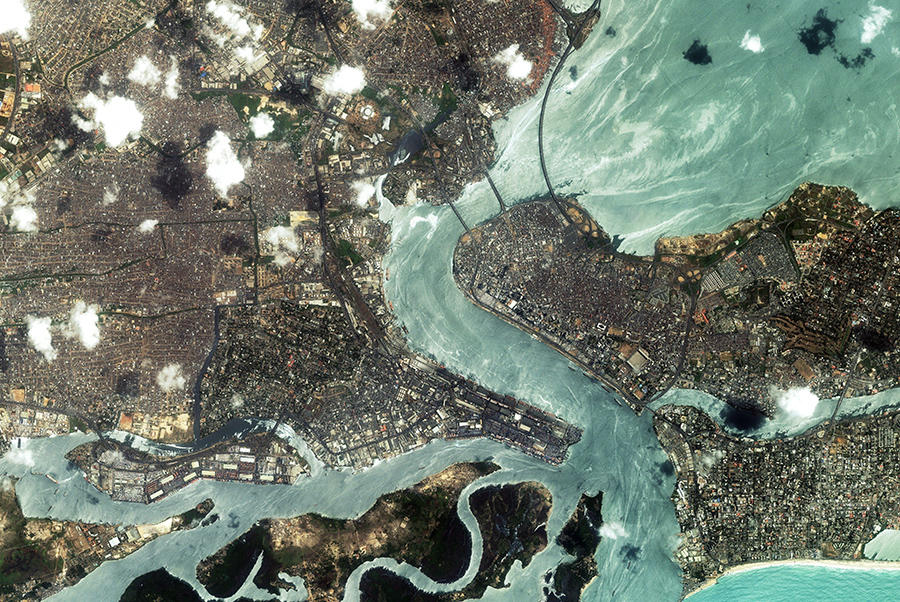 “As the epitome of innovation—whether economic, technological, cultural, or social—megacities are true hubs for the advancement of rights,” stresses Lussault. The urbanization of women, for example, often lowers their fertility rate and increases school enrolment; more open spaces make it easier for them to escape the patriarchal order. And even if poverty remains high in cities—as illustrated by Rio's favelas—absolute poverty does nevertheless tend to decline thanks to the many opportunities that the city affords: casual work of all kinds, street hawking, etc.

More worrying, however, is the worsening of social inequalities and the growing tensions they create within urban centers. “The larger the city, the greater the income disparity,” emphasizes Pumain. “International capitalism opens offices but simultaneously creates a large number of low-qualified maintenance and cleaning jobs, etc.” This phenomenon also manifests itself spatially, with an ever-starker divide between rich and poor neighborhoods. The rise in the number of “gated communities,” wealthy areas entirely closed to the rest of city, is the strongest expression of this trend—as typified by the famous towers of Alphaville in São Paulo or the lakeside villas of Palm Springs Garden in Chongqing (China), to name just a few examples. 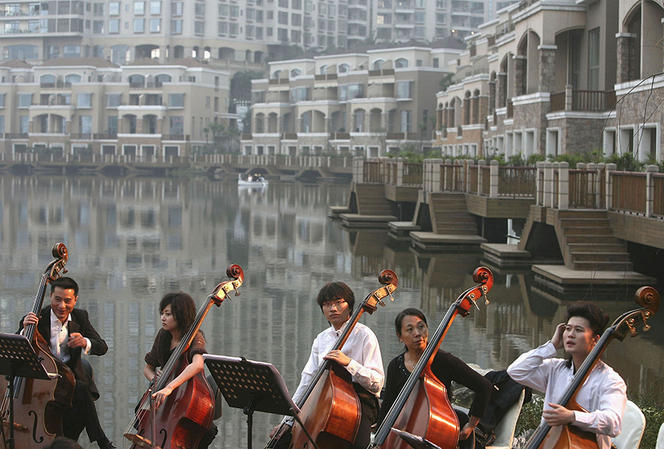 Palm Springs Garden in Chongqing (China). The increasing number of “gated communities,” wealthy neighborhoods closed to the rest of the city, signals the ever sharper divide between rich and poor. 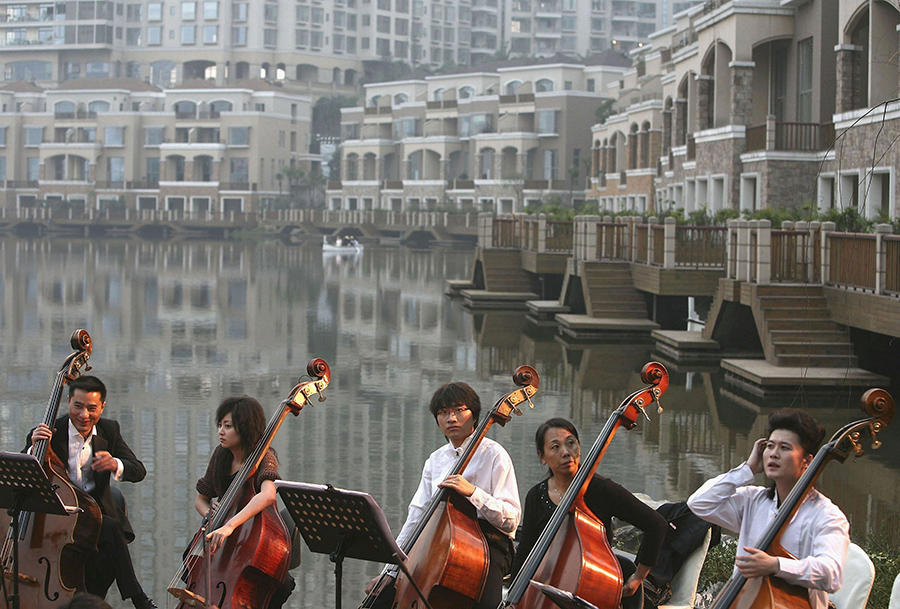 Yet growing inequalities are far from being the only challenge posed by this change in scale. The transport flows and pollution generated by daily traffic congestion has become the main concern of these huge urban clusters—in cities like Beijing, Shanghai, or Mexico City, emissions are such that the sky is now constantly a milky white color. Climate change is another major challenge, and a particularly important one for megacities due to the "heat island" phenomenon. “The mineral heart of cities is much hotter than their outskirts, and that looks set to worsen as the planet continues to warm," explains Lussault. "A city like Paris, for example, is 2°C warmer on average than its suburbs, but this differential can reach 5°C in a heat wave.”

Although the problems they face are commensurate with their size, megacities are also seeking to become places where solutions are found. A diplomatic system involving the planet's largest cities is now emerging, bypassing traditional discussions at the transnational level. On the issues of climate change and ecology, the C40 Cities Climate Leadership Group, initiated in 2007 by the then mayor of London Ken Livingstone, brings together the 90 largest megacities in the world. The elected representatives of this network, which is currently chaired by the mayor of Paris, Anne Hidalgo, convene several times a year to look at issues including transport, food, motorways, migrations, etc. After the COP21 in Paris in late 2015, the C40 cities made a firm commitment to go beyond the emission thresholds to which countries had signed up. “Megacities claim that they can do better than the states they are part of, because they are not tied by diplomatic constraints,” notes Lussault.

With megacities, a new geopolitical order is emerging. Increasingly interdependent—their ways of life tend to converge and their inhabitants to migrate from one to another—these city-worlds are real hubs of stability, partially escaping the diplomatic tensions that exist between countries. “This is undeniably a driving force for peace. But there is a serious risk that they could become completely cut off from the rest of the country,” Lussault warns. And that Paris for example might interact more with London, Frankfurt, or New York than with other French cities like Lille or Tours…

Opinion
How to Fight Deforestation in the Amazon?

Article
Is the Oasis a Mirage?