Home / Articles / Delaying the Epidemic to Help the System Adapt

Delaying the Epidemic to Help the System Adapt

Home / Articles / Delaying the Epidemic to Help the System Adapt

Delaying the Epidemic to Help the System Adapt

Preventive messages concerning the new Covid-19 coronavirus epidemic. Stage 3 in the business district of La Défense, in Paris (16/03/2020).
Eric TSCHAEN/REA
Share
Share
​Interview with Josselin Thuilliez, a health economist, on coronavirus. This CNRS scientist works on epidemics and their impact on individual behaviours, healthcare systems and control policies. He is a member of REACTing, a consortium set up to coordinate research on emerging outbreaks.

Do we have any recent experience of an epidemic on a scale comparable to that of Covid-19 in France?
Josselin Thuilliez:1 Not to my knowledge. This one is unique because of its increasing importance throughout the world – so much so that it has now been qualified as a pandemic. The last equivalent scourges were those of Spanish flu – which during the winter of 1918-1919 caused several tens of millions of deaths worldwide – and that of Asian flu between 1956 and 1958.

Now that confinement measures have been taken throughout the country, do you think that France’s response is sufficient to deal with the crisis?
J.T.: We’ll have to wait until the whole event has been managed before we can tell. Until now though, the French response has been gradual, proportionate and in line with the criteria specified by the World Health Organization (WHO), which states that a choice must be made between health priorities and socioeconomic costs in the event of an epidemic. It is always difficult to act, because it is impossible not to make mistakes, so the measures being implemented at present should be considered critically, of course, but also constructively. There is no doubt that more mass testing could have been carried out, as in South Korea, but this is also expensive and is now no longer a priority in light of the influx of cases. When compared with the situation in Italy and China, we should probably have reacted more rapidly, but this is the first time that we have been confronted with such a degree of confinement in response to an epidemic. Without experience, it is not easy to determine the right time to do things.

Does the French system have sufficient capacity to deal with a health crisis on this scale?
J. T.: Despite the situation that we are seeing at present in hospitals, the French system is egalitarian in that it enables the rapid management of the greatest number of people, independently of their financial resources. This is not the case everywhere, and especially in many southern countries where access to healthcare is mainly based on private household income. France is well equipped, but will it be able to absorb a massive influx of new and serious cases? That is the principal challenge of the government’s current strategy, which is trying to smooth the curve of the virus so as not to overwhelm services. The idea is that the more we can delay the peak of the epidemic, the better the system will be able to adapt.

Indeed, if you look country by country at the evolutionary curves of the outbreak (the cumulated number of cases relative to the population) since patient zero was identified, the curve for France increases less rapidly than others and was flatter at the start, although it is now strongly accelerating. Countries such as Switzerland, Norway or Iran saw a much steeper rise in the number of cases soon after the first ones were detected, while Italy experienced an explosion as from D+20. France and Germany are seeing a relatively similar evolution, with a marked acceleration as from D+30, in other words a few days later.

What does an epidemic curve look like?
J.T.: Working with colleagues, we have tried to model behaviours in the case of other infectious diseases. From an economic point of view, an epidemic generally follows an S-shaped curve: an initiation phase, followed by a growth phase before reaching a peak, then a downturn and a decline phase; there can be a rebound which may be more or less marked, or, if all new cases are totally controlled, an elimination. However, this S-shaped curve can be interpreted in several ways. The epidemiological analysis tells us that the more infected patients there are, the more the number of new infections will decrease until the disease reaches a ceiling and then declines, as its natural reservoir (people who have not yet been in contact with the virus) gradually diminish.

The economic interpretation – and thus its added value – is based on the personal and collective behaviours of different actors and the study of unanticipated effects: individuals react to a risk and to their environment (neighbours, local area and public policies). They may therefore increase their level of protection in response to the infection, which will slow down or even reduce its spread; there is nevertheless a risk of a rebound if people lower their guard, such as when effective treatments are introduced, or are becoming weary of preventive measures. A third reading of the S-curve is linked to the introduction of innovations that will allow the illness to reach its peak and then start to decline. Such innovations may include new treatments or vaccines, but also different behaviours or novel public policies. 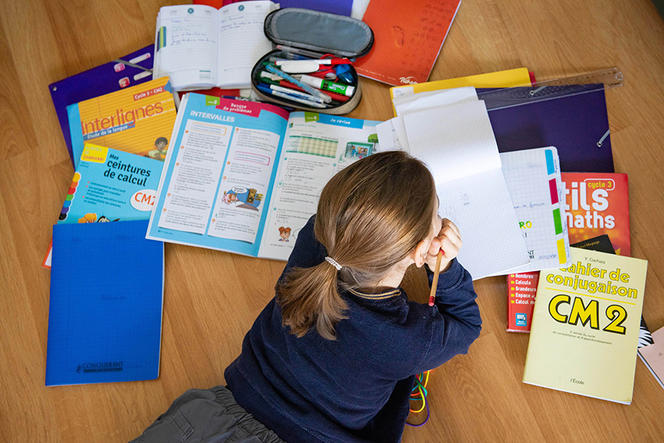 All education establishments have been closed in France since Monday 16 March. This is one of the first measures implemented by the government to stop the spread of coronavirus, before the decision was made to confine the entire population. 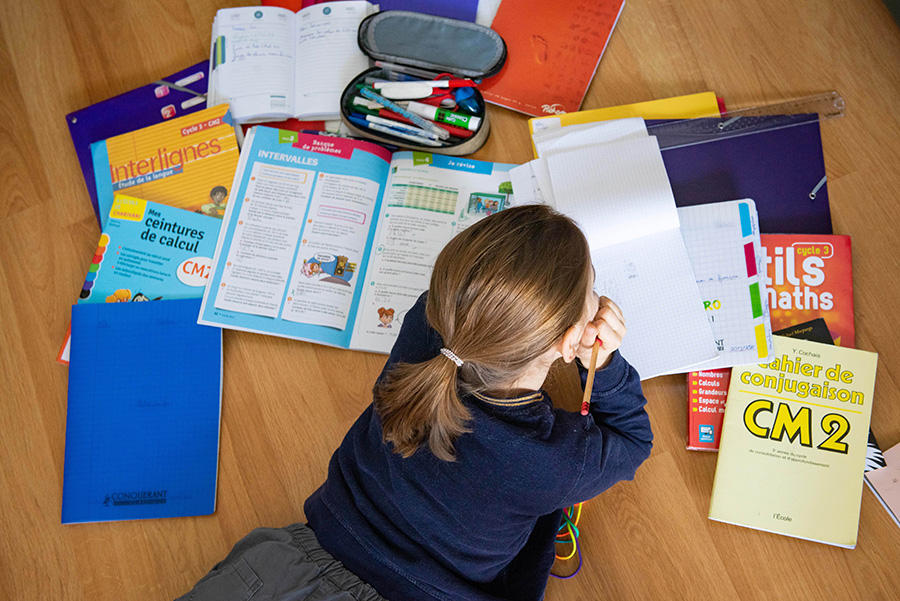 All education establishments have been closed in France since Monday 16 March. This is one of the first measures implemented by the government to stop the spread of coronavirus, before the decision was made to confine the entire population.
Eric TSCHAEN/REA
Eric TSCHAEN/REA
Share
Share

What do we know about the effect of specific measures, such as closing schools?
J.T.: On this subject, a study was conducted in 2016 by Jérôme Adda, a French colleague and health economist at Bocconi University in Milan (Italy). Looking at the past 25 years in France, he studied the impact of school holidays and transport strikes on the statistics concerning three viruses: seasonal influenza, gastroenteritis and chickenpox (varicella). According to his findings, school closures had a noticeable effect on the incidence of influenza and reduced its levels for a 3- to 4-week period, not only among children but also adults.

A significant reduction in transmission rates was also observed during transport strikes, although on the contrary, extensions to the high-speed train (TVG) network during this 25-year period globally increased contagion. The same study also found that closing schools for two weeks resulted in an average reduction of 12% in the annual incidence of the three diseases, while a policy to close public transport for a week made it possible to achieve the same result. In view of the mortality rates observed with Covid-19, which are around twenty times higher than those observed with seasonal influenza, this analysis shows that current measures are entirely justified in terms of cost-efficiency to fight this pandemic.

You belong to the REACTing (Research and action targeting emerging infectious diseases) research group. Can you tell us more about it?
J.T.: This consortium was initiated in 2014 and involves multidisciplinary and multi-institutional teams working on emerging infectious diseases, both in France and elsewhere (plague in Madagascar, Zika and chikungunya in the West Indies, etc.). Its mission is to prepare and coordinate French efforts aimed at preventing and controlling epidemics. The Ministry of Higher Education, Research and Innovation has entrusted REACTing with responsibility for coordinating French research on the new coronavirus. The consortium mobilised its forces from the onset of the Covid-19 epidemic and the teams involved received seed funding to initiate their work. Twenty projects were selected and are focusing on major themes: epidemiology, clinical, diagnostic, therapeutic, and basic research, as well as human and social sciences. Our group is a privileged contact for the authorities in the context of this crisis and is facilitating collective appeals from research actors. It also favours exchanges between scientific teams and industry with respect to issues like access to samples, treatments or diagnostics, etc.

In the longer term, the consortium is participating in discussions by the international community on the best response to make to these epidemic threats. From an economic perspective, one option might be to set up a global insurance and solidarity system to foster innovations throughout the world. This would consist in providing financial or monetary incentives for the development of novel solutions before an epidemic starts, so as to react more rapidly. Indeed, breakthroughs in the health sector (in particular the creation of vaccines and drugs) require considerable research and development funding, even though the market is unpredictable: it is impossible to tell whether a disease will one day develop into an epidemic and such R&D costs will pay off.

Yet whichever system is chosen to improve the fight against emerging outbreaks in the future, they will not all happen and we will not be able to prevent them all. One thing is certain: there will be further epidemics, as there have always been throughout human history, occurring more or less frequently. We need to prepare for the related risks and uncertainties by setting up cooperative mechanisms that are more effective than those we have today.

Finally, what are your views on today’s mobilisation by research teams the world over? Are there real efforts to collaborate?
J.T.: Collaboration certainly exists between international laboratories. We are seeing a marked change in research procedures, especially regarding result sharing and ongoing work evaluation systems. A large number of pre-publications are being put online so that they can be consulted much more rapidly by the entire scientific community. The advantage of this system is that it is faster and makes it possible to gain several weeks or months. The drawback is that it is necessary to distinguish between all these findings in terms of quality, as they have not gone through the standard circuit for scientific publications and have not all been previously reviewed by an expert committee. We therefore need to design new evaluation methods. It may well be that the coronavirus crisis will have a long-lasting influence on how we carry out and publish our research. This process is already under way and is expected to accelerate.

See author's bio
Basic Science is the Best Protection Against EpidemicsPrevious
A New Diet to Slow Down Alzheimer’s Disease?Next

Article
Basic Science is the Best Protection Against Epidemics
Coronavirus