Home / Articles / In Sport, Innovation across all Fields!

In Sport, Innovation across all Fields!

Home / Articles / In Sport, Innovation across all Fields!

In Sport, Innovation across all Fields! 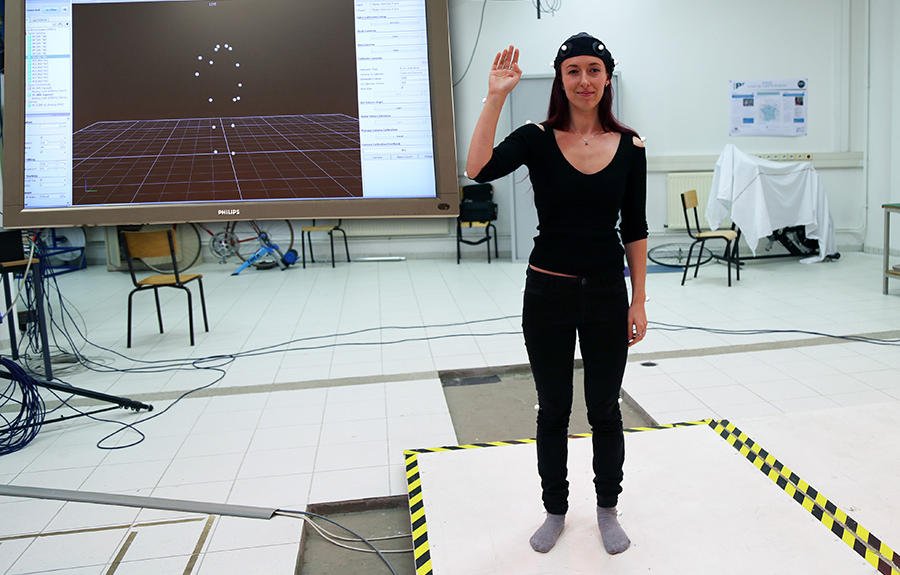 Currently under development, the PLAViMoP platform should enable the optimisation of a technical gesture, especially opposite an opponent.
Y. Almécija/CNRS
Share
Share
Whether surfing or football fans, cycling champions, or simply those concerned about protecting their bodies during physical effort or against injuries, researchers are innovating on all fronts in the field of sport.

Here are six devices or systems designed for both confirmed athletes and casual sportspeople. Among those, protective gear for avoiding injuries, a model for evaluating the best helmets, an algorithm for deciding whether to play a football player or not, a connected board for learning how to surf, a bicycle for people with disabilities, and a motion capture platform for optimising one's gestures when facing an opponent.

Football: an algorithm for avoiding injuries

Which football player to field? That's the dilemma of any coach confronted with the risk of injury to his players. To help with the decision-making, the startup IPA Technologies and the LMBP1 set to work two years ago on developing a predictive model. "The goal of the mathematical model is to provide an individual risk of muscular injury without contact from another player," explains Pierre Druilhet, a researcher at the LMBP. In order to do so, the club uses the Playsharp platform to provide precise daily data on the activity of its players, for example the time they spend on the field, or their practice load. "The software is based on both an explanatory type of model (using actual knowledge of the domain) and automatic learning (using data collected on the players)," the researcher points out. The main difficulty is that "the number of injuries observed is relatively modest, all the more so as a player with a high risk can precisely be excused from a match. This requires adapting existing modelisation techniques". The ultimate goal is to adjust these models for prevention in other sports, and the mathematician hopes to "even extend them to the largest number of people, including amateur athletes as well as the chronically ill".  L.G. 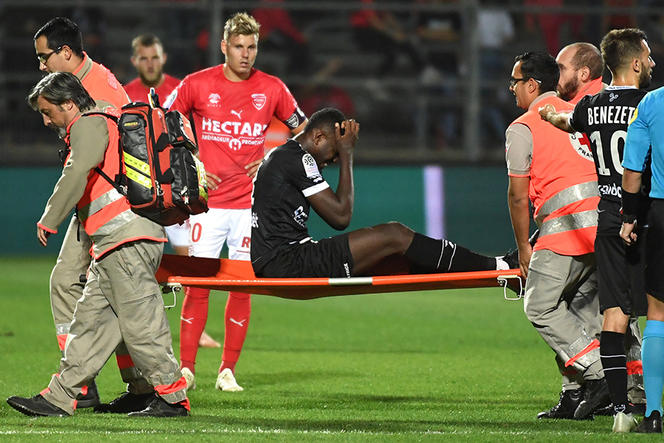 Could the software program that evaluates the risk of injury have prevented Marcus Thuram from being carried out of Nîmes stadium on a stretcher on 26 September 2018? 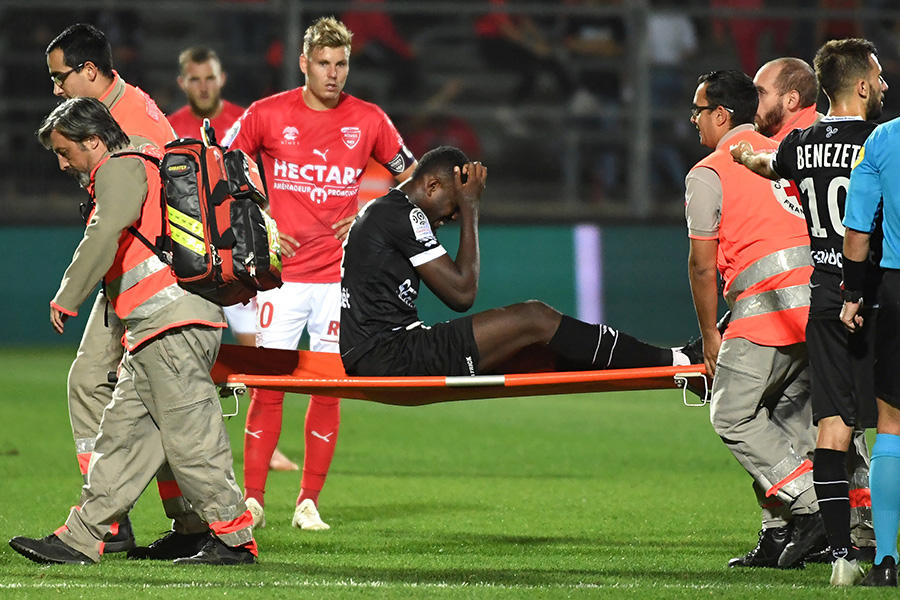 Could the software program that evaluates the risk of injury have prevented Marcus Thuram from being carried out of Nîmes stadium on a stretcher on 26 September 2018?
P. Guyot/AFP
P. Guyot/AFP
Share
Share

Learning to surf thanks to a connected board

Beginner surfers know all about it: it takes on average one year of practice to stand up on a board. Catching a wave correctly does not follow naturally, as the researchers from the I2M,2 being boardsports enthusiasts themselves, have clearly understood. They designed an on-board device for surfboards, which uses a light signal to tell novice surfers when to stand up. The result of four years of research, the technology is now being marketed by the startup By the wave. To develop this tool, the scientists used sensors to analyse the movements of a surfboard in order to record its acceleration, speed, and the surfer's positioning, all while taking into consideration the board's environment. "The series of measurements conducted in real time informed us about the board's behaviour in relation to the wave," explains Jean-Luc Barou, co-founder of By the wave. The innovation was adapted to integrate a coaching algorithm that analyses body movements in real time, and provides personalised recommendations. By the wave has now opened a 100% connected surfing school. “The next step is to adapt this technology to other sports through the Ride+ brand," Jean-Luc Barou adds. L.G. 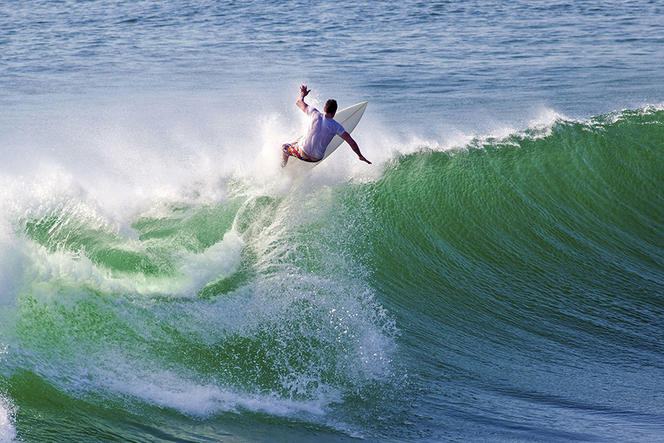 Before taking a wave like this surfer, you could train on a connected board that tells you when to stand up amid the waves. 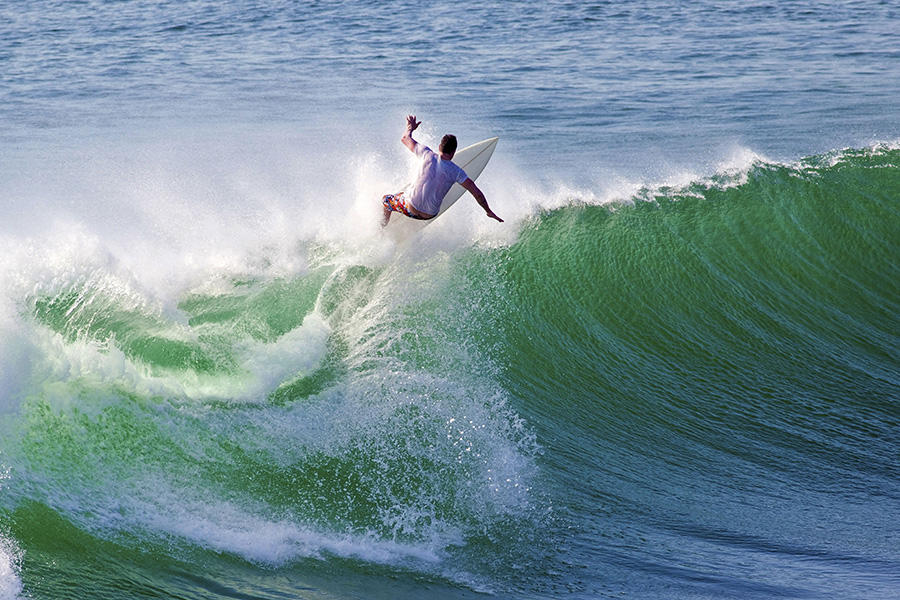 A platform for analysing movement

The capture of movement is not reserved to cinema and video games. The PLAViMoP3 platform, developed by the Research Centre on Cognition and Learning (CERCA)4 and the CNRS Pprime (P’) Institute are using this technique to make 3D recordings of the gestures, expressions, and gaits of both humans and robots, and eventually of animals. "We are developing a participatory database of broader and finer movements," explains Arnaud Decatoire, a research engineer at the P' Institute. "Each user can then pick out a particular sequence and transform it based on their objectives." According to Christel Bidet-Ildei, senior lecturer at the CERCA, who already uses it to study the connection between language and the perception of movement, PLAViMoP could also be used for motor rehabilitation (by presenting suitable positions for patients) and gesture optimisation in the field of sport. What would be interesting is if the platform could visualise action in order to anticipate the opponent's gestures in disciplines that involve two players (fights, tennis...). Researchers are liaising with various sports federations with a view to collaborating. M.K.

A bicycle propelled by electrostimulation

After being thrown off his bike, Vance Bergeron, a senior researcher at the Physics Laboratory of the ENS de Lyon,5 became tetraplegic. He decided to set aside his research in physical chemistry to concentrate on neurological rehabilitation, in order to develop a system that helps the disabled to pedal. In addition to being a means of transportation, the goal is to promote physical activity, which is indispensable for avoiding muscular atrophy and for stimulating blood circulation. This turned into the project Circles, which is led by the SATT6 Pulsatys. The researcher and his team developed a prototype bicycle7 propelled by electrostimulation, thanks to electrodes placed in three muscular groups in the legs: the quadriceps, hamstrings, and gluteal muscles. The current, which is delivered in a defined order within the different electrodes, causes the muscles to contract and produce a pedalling movement. The team is now developing an algorithm to identify which stimulation sequence is best adapted for each person. The idea is to eventually make the bicycle available to physiotherapists, coma patients, and members of the gyms developed by the association Ants, which was created by Bergeron. A startup should be launched by the end of the year. "The objective is to begin selling the bicycle in 2020. And we will stand firm on price: as low as possible in order to make it accessible to the largest number of people," the scientist stresses. L.G. 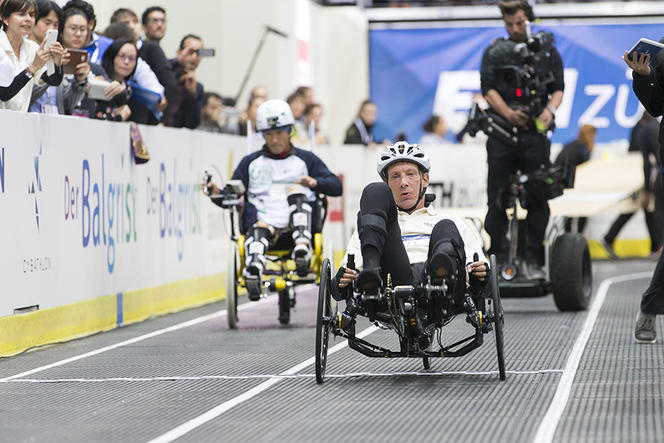 Vance Bergeron, seen here during the 2016 Zurich Cybathlon (Switzerland), developed a bicycle that can be pedalled by a tetraplegic individual. 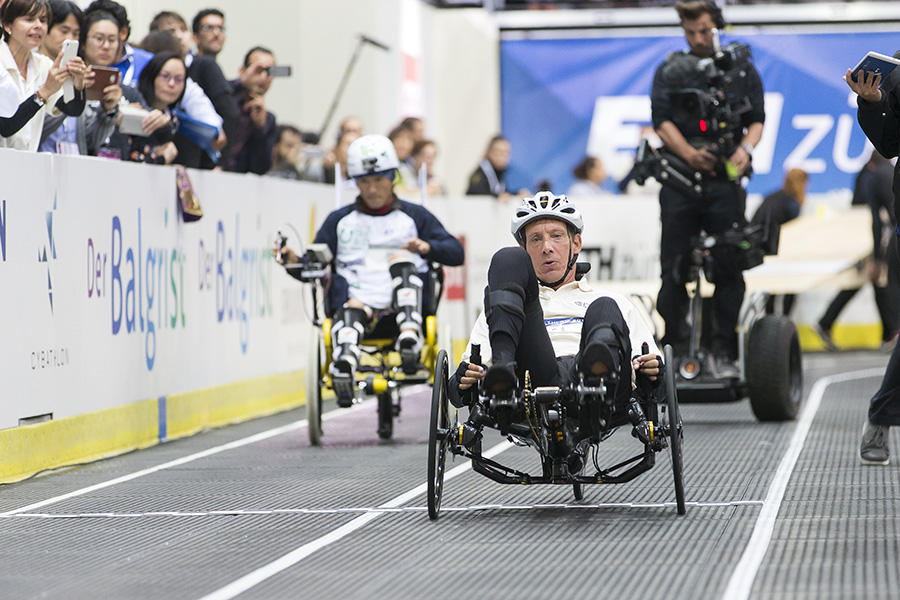 During the study of head impact and helmet resistance, crash test dummies cannot encompass everything that the brain suffers. Since an impact at 10 km/h is enough to cause serious injuries, protection against head trauma is vital for both cyclists and motorcyclists. In an effort to contribute, Rémy Willinger, leader of the MMB team at the ICube laboratory,8 decided to couple experimental tests with a digital modelisation of the brain. "We need models to reconstruct head injuries and develop criteria for injuries," says the researcher, whose work is conducted in partnership with the Fondation Maif and the Mutuelle des Motards. On their Certimoov platform, helmets are subjected to impact, and the acceleration of the fake head is introduced in the digital model, in which the brain is represented by a fine network of 5,300 elements. Contrary to existing norms, this new method of biomechanical evaluation9 takes into account not just rectilinear but also angled impact, and does so with three types of rotation, and an equal number of transferences. "Tangential forces cause an angular acceleration of the head, and we know that the brain is very sensitive to rotations," Willinger emphasises. Certimoov is already testing a number of helmets on the market, and is making the results available online for free, in an effort to help the public make the best choice of protective equipment. M.K. 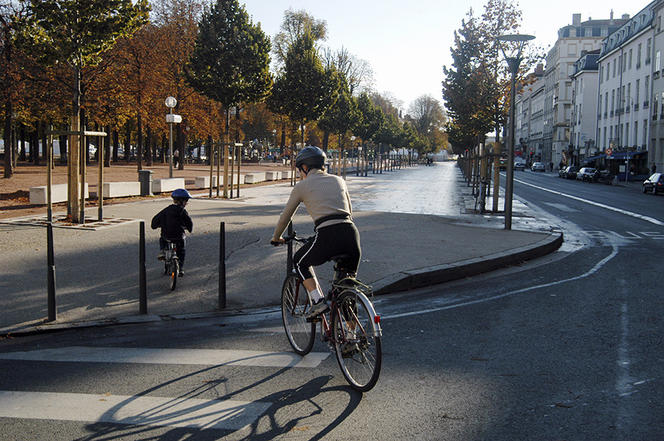 Certimoov can crash test the helmets of cyclists and motorcyclists in a more realistic way than the norms currently under use. 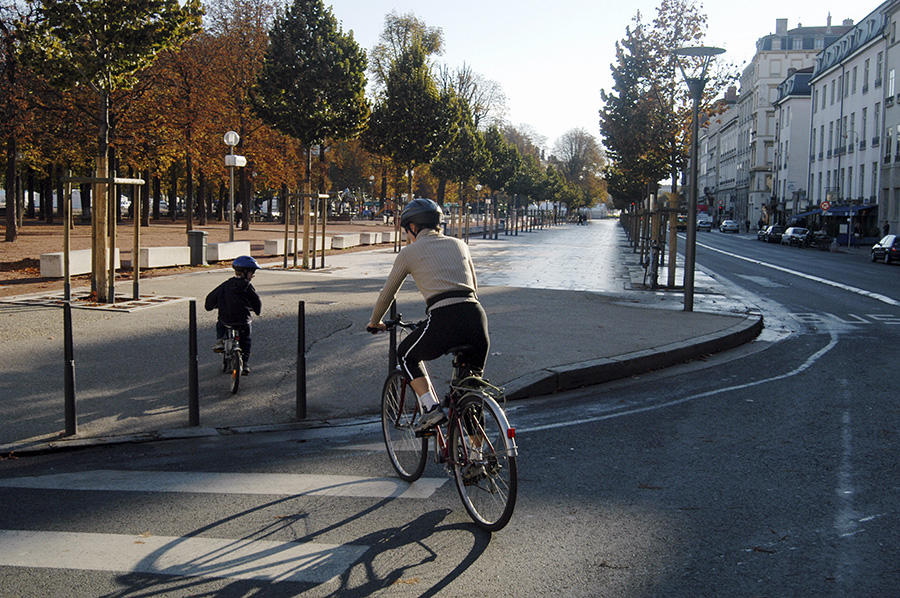 Certimoov can crash test the helmets of cyclists and motorcyclists in a more realistic way than the norms currently under use.
S. Audras/REA
S. Audras/REA
Share
Share

Protective gear against falls and impacts

Preserving the backbone and spinal cord during falls or impacts, in a scrum or a fight, is a major concern that has drawn the interest of the international associated laboratory iLab-Spine, which brings together researchers and doctors from Marseille (southeastern France) and Montreal (Canada). On the French side, teams from the LBA10 and the Centre for Magnetic Resonance in Biology and Medicine (CRMBM)11 are combining an experimental approach with digital simulation and advanced medical imaging. They are studying the risks of lesions, while improving procedures for evaluating protective gear. "The central issue is to understand how the backbone suffers injuries, and to better assess the severity of the damage caused by impacts and fractures," explains Pierre-Jean Arnoux, director of iLab-Spine and the LBA. Digital models are applied to numerous sports such as rugby, skiing, and motor biking, in instances of severe damage or chronic trauma. The iLab-Spine team was also sought out by the Cirque du Soleil to explore an exoskeleton able to support the backbones of their acrobats when they carry a number of people on their shoulders. "Understanding how injuries occur helps us develop new devices for protecting them," Pierre-Jean Arnoux concludes. M.K. 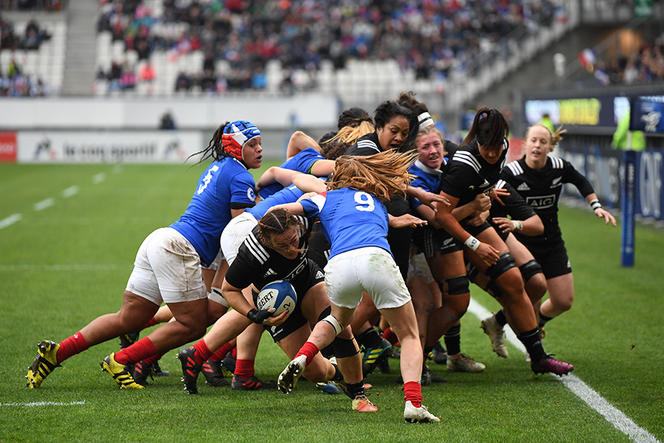 In a scrum such as this one between France and New Zealand in November 2018 in Grenoble (southeastern France), the spinal column is often put to a severe test. 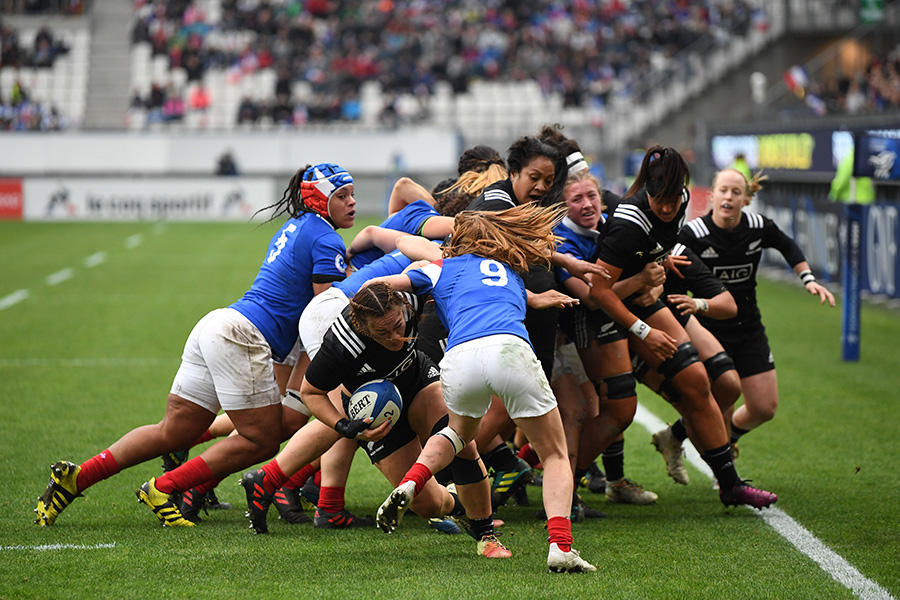 In a scrum such as this one between France and New Zealand in November 2018 in Grenoble (southeastern France), the spinal column is often put to a severe test.
J.-P. Clatot/AFP
J.-P. Clatot/AFP
Share
Share

A great deal of groundbreaking research work will be presented at the CNRS Innovatives Sport event, which will take place in Paris in November 2019. In Lyon, the Sport Unlimitech trade fair, which will be held from 19–21 September, will connect sport and innovation.

Article
“Come on, you Reds!” They Shouted in Ancient Games

Article
How Many Sexes Are There?