Home / Articles / How are oceans born?

How are oceans born?

Home / Articles / How are oceans born?
0 comment
Earth
Geology
-A +A
article

How are oceans born?

Christel Tiberi
Share
Share
The oceans have not always looked the same as they do today. Their shape and size keep changing over the course of geological time. There are even places on Earth where they are still in the making. This raises the question of where and how oceans form. The Earth sciences help to shed light on the mechanisms underlying this phenomenon.

Although the Earth's oceans as we see them today are several thousand kilometres wide (for instance around 6 000 km for the Atlantic Ocean), their history began with fractures and basins that were far smaller in size. The initial phase preceding their formation is called rifting, or continental rupture, since an ocean in fact results from the break-up of a continent. Understanding this process is of key importance for a number of reasons that involve several scientific fields.

Firstly, at a fundamental level, it makes it possible to study the ways in which new tectonic plates are created. However, rifting also leads to the emergence of basins and therefore determines the location of resources that have always been of value to humans, such as water, minerals, fossil fuels and geothermal energy. In addition, the faults associated with rifting constitute topographical barriers that impact population dynamics. And finally, the accompanying seismic and volcanic activity is a source of risk that has to be managed by local communities. Most of today's ocean basins are too mature to allow direct access to this initial phase of formation. 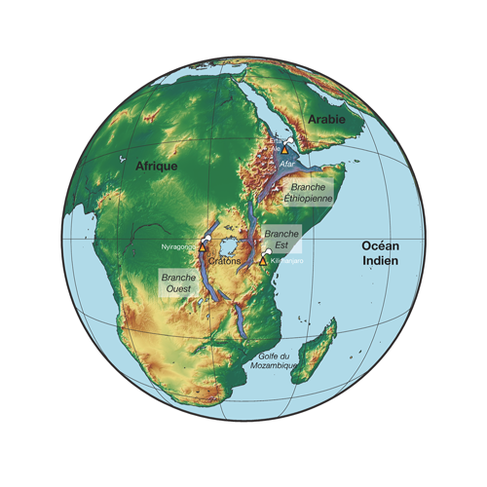 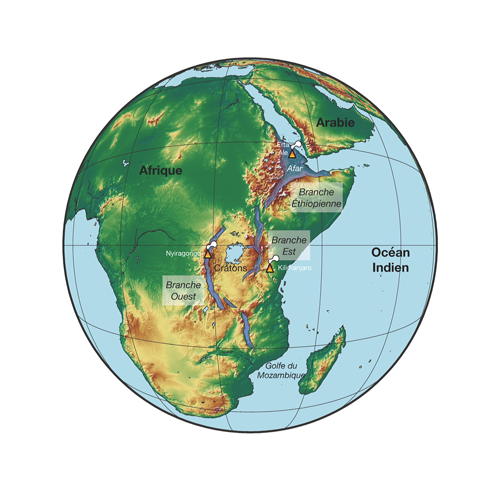 The evidence that could enable scientists to understand how and why these oceans formed in one particular spot rather than another is often buried beneath several kilometres of water and layers of sediment. The thermal and dynamic processes associated with their creation are also likely to have disappeared long ago. Researchers therefore need to seek the answers to their questions in active rift zones accessible on present-day continents. Nonetheless, not all rifts give rise to a new ocean.

The East African Rift is unique in this respect. Over a distance of some 4 000 km, from the Afar Triangle to the Gulf of Mozambique, it provides an unparalleled overview of the various stages of continental rupture over the past 25 million years. Whereas rifting has barely begun in its southern portion (in the past 1 to 5 million years in Malawi, Mozambique and Tanzania), it has reached a very advanced stage in the Afar Triangle, where the composition of the Earth's crust has actually started to undergo modification. This very unusual region lies at the junction of three distinct fractures, where numerous depressions (basins), faults, and active volcanoes attest to the dynamic internal processes involved in the break-up of the lithosphere.

By combining research in several different Earth science disciplines over a few decades, scientists have successfully determined the rate at which rifting is taking place and identified the processes at work. The East African Rift is opening at an average rate of around 7 mm per year, a far cry from the Atlantic's 3 cm per year. The reason for this is that, in order to break up and give birth to an ocean, the African continental crust, which is some 30 to 40 km thick, first has to become considerably thinner (the average thickness of oceanic crust is only 10 km). This involves several factors and processes. In the first place, the Earth's mantle beneath eastern Africa turns out to be abnormally hot, modifying the physical characteristics of the crustal material in the region, such as its temperature, density, ability to break up, deform, or flow, etc. This facilitates the break-up of the Earth's rigid outer layer, the lithosphere.

Although geochemical and petrophysical analyses, as well as tomographic images, clearly indicate the anomalous nature of the mantle under the East African Rift, the presence of one or more plumes along the 4 000 km of the rift, and their precise origin (lower mantle or upper mantle) are still the subject of intense debate in the scientific community.

This rise in temperature leads to melting of certain constituents of rocks located at depths of around 150 km, producing magmatism in the region. Magmatic activity is attested to by the presence of numerous volcanoes, such as the legendary Kilimanjaro in Tanzania, Erta Ale in Ethiopia, and Nyiragongo in the Democratic Republic of Congo, which has recently erupted. However, these volcanoes are merely the visible part of the magmatic and dynamic activity of the East African Rift. Magma intrusions that fail to reach the surface are believed to weaken the top 100 kilometres enough to stretch and thin the African crust. 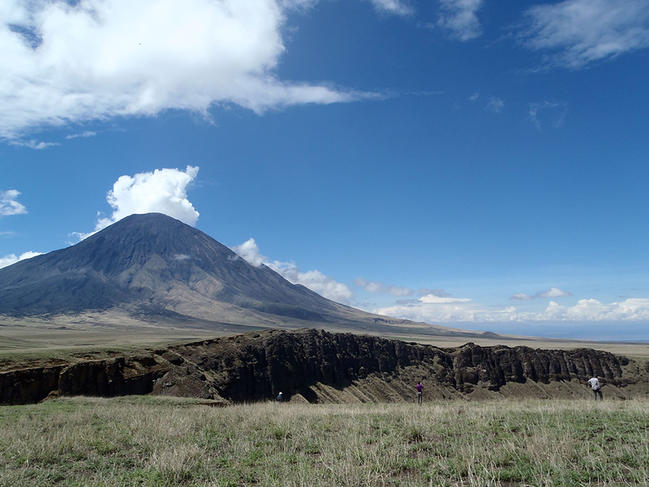 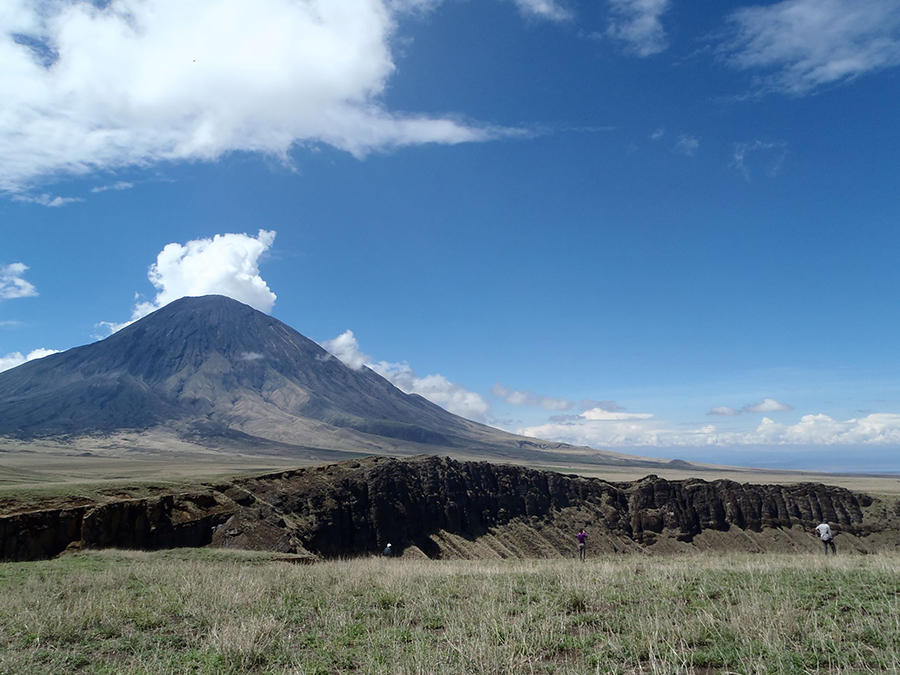 The reach of a deep plume extends well beyond the limits of the rift and its surface location. So why does rifting take place in well-defined valleys, and why does the East African Rift exhibit such a characteristic three-branched shape? This is partly due to the extremely heterogeneous composition of the lithosphere. The presence of much more rigid ancient cores (around 2 billion years old), called cratons, forced the rift to bypass them by deviating from its initial path (the Ethiopian branch), forming the eastern and western branches. The region's tectonic history and its various geological units have clearly played a major role in the location of fractures at the surface.

It appears that the break-up of a continent and the birth of a new ocean depend on many factors and on complex interactions between internal and external processes and lithospheric structures. In an effort to further investigate this exceptional site, scientific collaborations are pooling their resources with the aim of continuing to carry out imaging, drilling, and extraction of the wide range of data required to understand the connection between rifting and ocean formation. Chemists, physicists and geologists are working together to conduct research on all scales, ranging from crystals to faults and basins. However, they have recently been joined by scientists from a wider range of disciplines, including palaeontologists, ecologists, social scientists and geographers, who have come together to study the rift on a systemic basis. 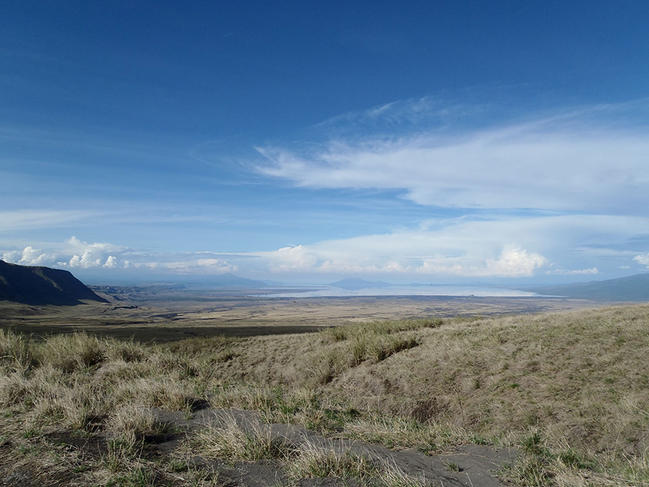 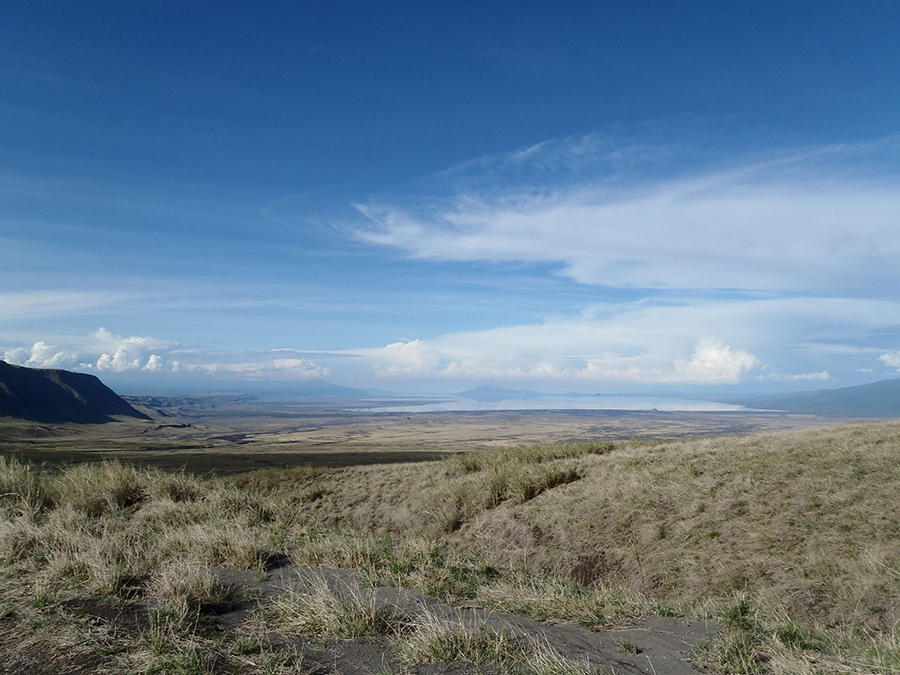 Such an interdisciplinary approach should improve existing understanding of this complex geo-bio-eco-socio-system, which is constantly evolving under the influence of a host of factors.

Video
In Botswana, an amazing stream in the desert
Geology

Article
Leaving a Mark on Mars