Artist’s impression of the SWOT satellite in front of the Earth, with its solar panels deployed.
CNES / Mira productions
Share
Share
Scientific concepts of the utmost importance, ranging from climate models to the water cycle, lack data about the height, velocity and flow rate of surface water. The joint French-US mission SWOT should shed light on these questions thanks to a brand-new onboard instrument.

Although water covers 70% of the Earth's surface, the research satellites that survey our planet mostly focus on land areas. SWOT1 stands out thanks to a ground-breaking instrument that will provide oceanography and hydrology researchers with unprecedented measurements of water levels, whether in the open ocean or in the middle of a lake. This joint mission by the French (CNES) and US (NASA) space agencies will launch on a SpaceX Falcon 9 rocket from Vandenberg Space Force Base in California.

“Part of the energy and heat of the oceans is missing in our climate models,” explains Rosemary Morrow, a CNAP2 physicist at the Laboratory of Space Geophysical and Oceanographic Studies (LEGOS),3 and oceanography science lead for SWOT. “This is because these components are contained in structures that are too small and too fast to be observed from space with existing methods. We believe that half of all vertical exchanges of biomass and nutrients take place in these structures, and that they are important pathways for heat and carbon sinks, which need to be included in climate estimates.”

The physicist has devoted her career to the study of mesoscale and sub-mesoscale eddies, in other words, instabilities in major currents on scales of around ten to a hundred kilometres. In particular, she specialises in eddies in the Southern Ocean, which are between ten and fifty kilometres in diameter. However, altimetry satellites now in orbit can only partially detect these features, while ocean current maps are restricted to those whose diameters exceed a hundred kilometres.

Satellites can measure only what is at their nadir, i.e. directly below them. SWOT carries an instrument of this kind, called Poseidon-3, but it is also equipped with the KaRIn imaging radar interferometer, which operates using two antennas placed at each end of a ten-metre-long mast. One of them emits radar pulses on both sides of the satellite’s track that bounce off the Earth's surface and are then picked up by both antennas.

The differences in distance and phase between the two signals – known as interferometry – are used to map water levels in two dimensions on very fine scales. Since the radar instrument is pointed at a slightly oblique angle, the signals received are spread over a swath of fifty kilometres on either side of the satellite ground track, plus a twenty-kilometre strip around it. Measurements are therefore taken over a 120 kilometre-wide zone. 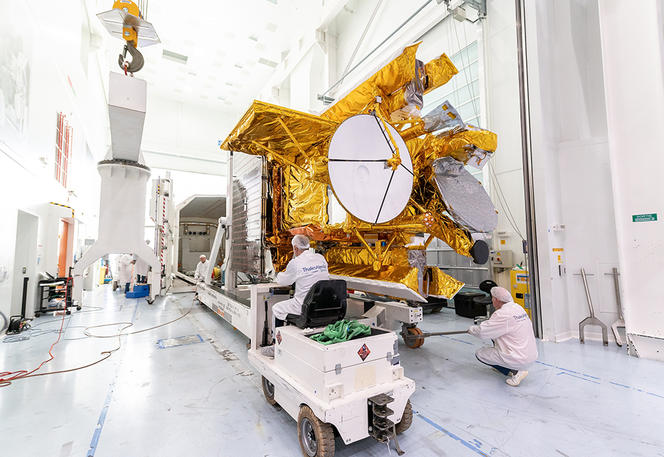 The SWOT satellite is placed into a container at Thales Alenia Space, in Cannes (southeastern France) before boarding the US Air Force C5 Galaxy headed to the Vandenberg Space Force Base in California (US). 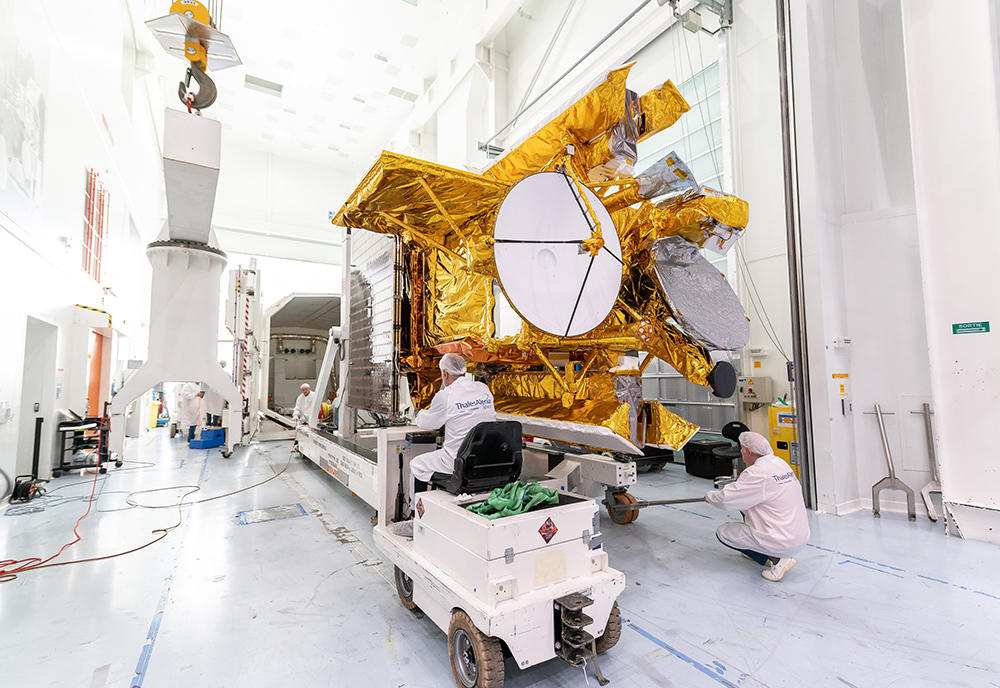 Thanks to interferometry, SWOT is not limited to surface areas : it can measure variations in water levels within the same body of water, whether a lake or a part of the ocean, and helps to determine the flow rate of a river or the speed of an ocean current. Concerning the oceans, SWOT takes measurements with a pixel resolution of four square kilometres and mean accuracy of 1.4 centimetres. It is the first and only satellite capable of providing such information.

“SWOT could be even more precise, but we had to make choices about the volume of data transferred between the satellite and the control centres,” Morrow points out. “However, resolution has been improved for the detection of lakes and rivers, which are of course smaller.” The satellite will provide a global, dynamic survey of surface waters and determine their flow rate, volume and height. This catalogue will be updated every three weeks, i.e. the time for SWOT to survey the entire planet.

The mission will measure the characteristics of two million lakes, a figure that could rise to six million. It will also survey all rivers more than a hundred metres wide, with the hope of going further and integrating all those whose width exceeds 50 metres. For flow rate measurements, the rivers targeted will be divided up into ten-kilometre sections, totalling more than 100,000 segments worldwide. In this way, SWOT will be able to study 90% of surface waters, oceans included. 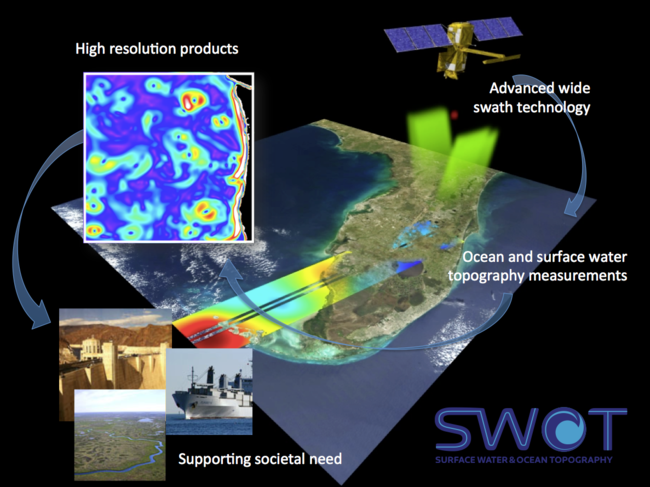 Unlike conventional instruments that perform occasional measurements of sea levels along a 10 km-wide strip, the new KaRIn radar will take images over 120 km-wide swaths, with an accuracy below the centimetre. 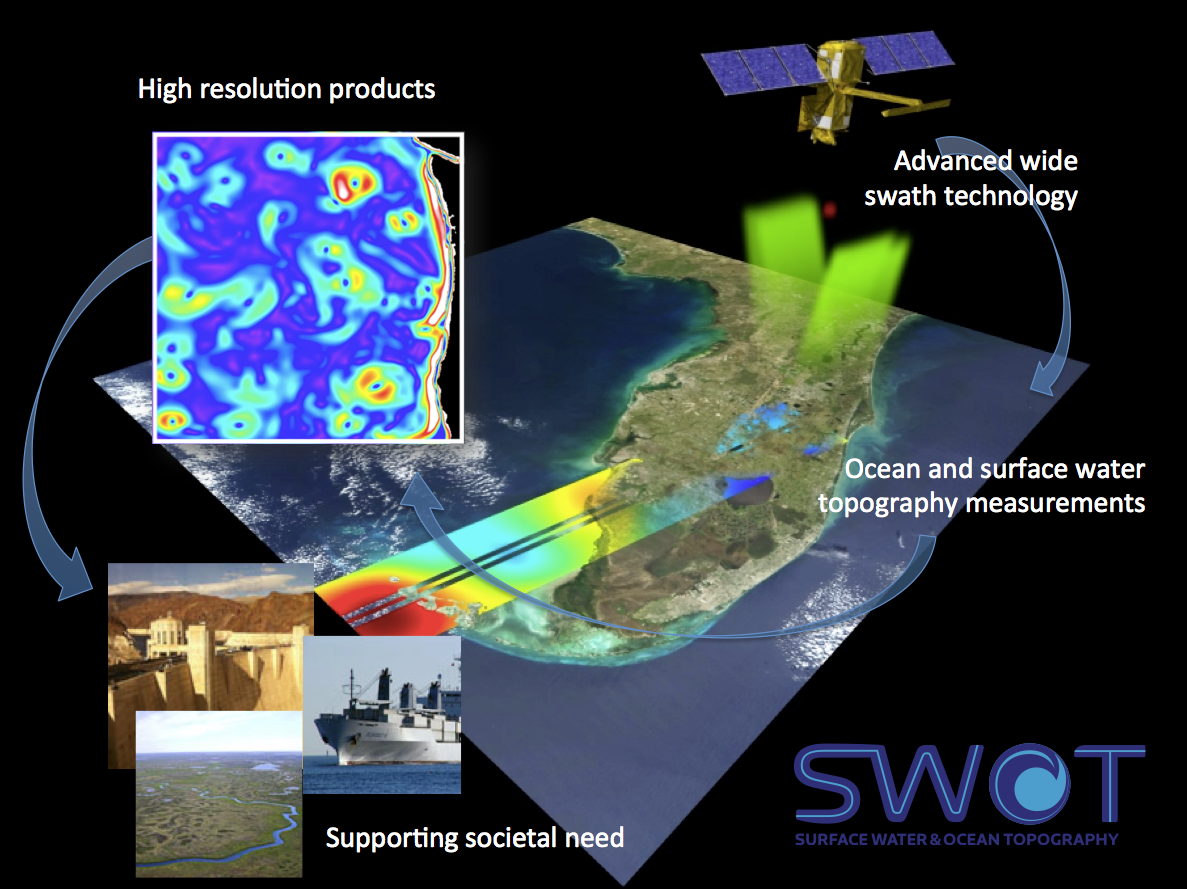 “Until now, we weren't able to access this information and had no way of accurately calculating the fluctuating values of so many features simultaneously,” explains Jean-François Crétaux, the hydrology science lead for the mission, and a member of the LEGOS. “And yet this data is a key variable in the water cycle, the least known part of which is precisely surface water. We know how to measure evaporation, the amount of water in the oceans, and snow cover, but evidence on lakes and rivers remains very incomplete. SWOT should finally enable us to wrap up the water cycle and thus really understand it.”

Bringing hydrology and oceanography together

The SWOT mission is expected to plug many gaps in oceanographic and hydrological models. However, in simulations these measurements will have to be combined with a variety of other data, such as surface temperature and salinity, winds, waves and tides, which will keep a number of scientific computing centres busy. SWOT will also be supported by field measurements, such as the Adopt-A-Crossover project, in which research vessels will head for the nadir of satellite track crossovers, about which more information will be available since SWOT will fly over them twice as often as elsewhere.

“Although the goals and constraints of oceanography and hydrology are not the same, we have succeeded in combining them in just one instrument thanks to extensive discussions very early on between the two communities on both sides of the Atlantic,” Crétaux explains. SWOT is in fact the result of fourteen years of preparation. The mission is expected to last three and a half years, but could be extended depending on how successful it is.

See author's bio
A conference to reverse the biodiversity crisis Previous
Feminicide: naming the crime in order to fight itNext

Article
First-ever physical model consistent with the history of the...
Geophysics