Seiichi Fukui/Stock.Adobe.com
Share
Share
For the first time, a physical model consistent with observations successfully describes how the tidal force caused by the gravitational pull of the Moon is slowing down the rotation of our planet and increasing the distance that separates it from the Moon.

NASA plans to return to the Moon in 2027. Yet to get there, the astronauts will have to travel a little bit further than their Apollo 11 predecessors: about an extra two metres! This is quite simply because our satellite moves a few centimetres further away every year, due to the tidal force exerted by the Moon on the Earth. The first person to understand this celestial mechanism was the son of the great Charles Darwin, George. In 1880 he postulated that the gravitational pull of the Moon deformed the Earth’s surface by creating a bulge that does not directly point towards the Moon (see below). The attraction between this bulge and our natural satellite acts like a slight brake on this mechanism, dissipating some of the energy of the Earth-Moon system. This reduces the rotation speed of our planet. However, since the total angular momentum of the Earth-Moon system has to be conserved, if the Earth spins more slowly, then the distance between it and the Moon must increase. 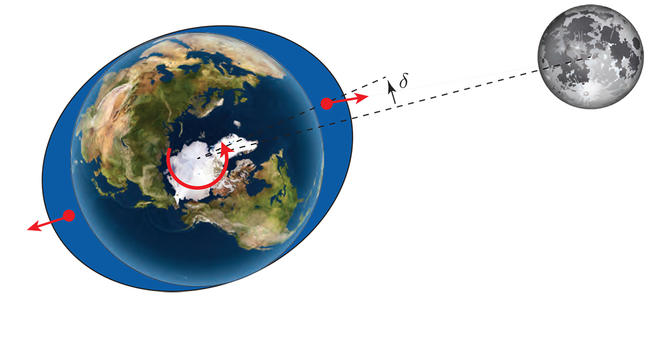 The gravitational pull of the Moon creates a tidal bulge on the Earth, but since our planet is not perfectly elastic and is spinning rapidly, there is a persistent phase lag between the bulge and the direction of the Moon (the angle shown in the diagram). The bulge produces a restoring force on the Earth's rotation, which gradually slows down over time. 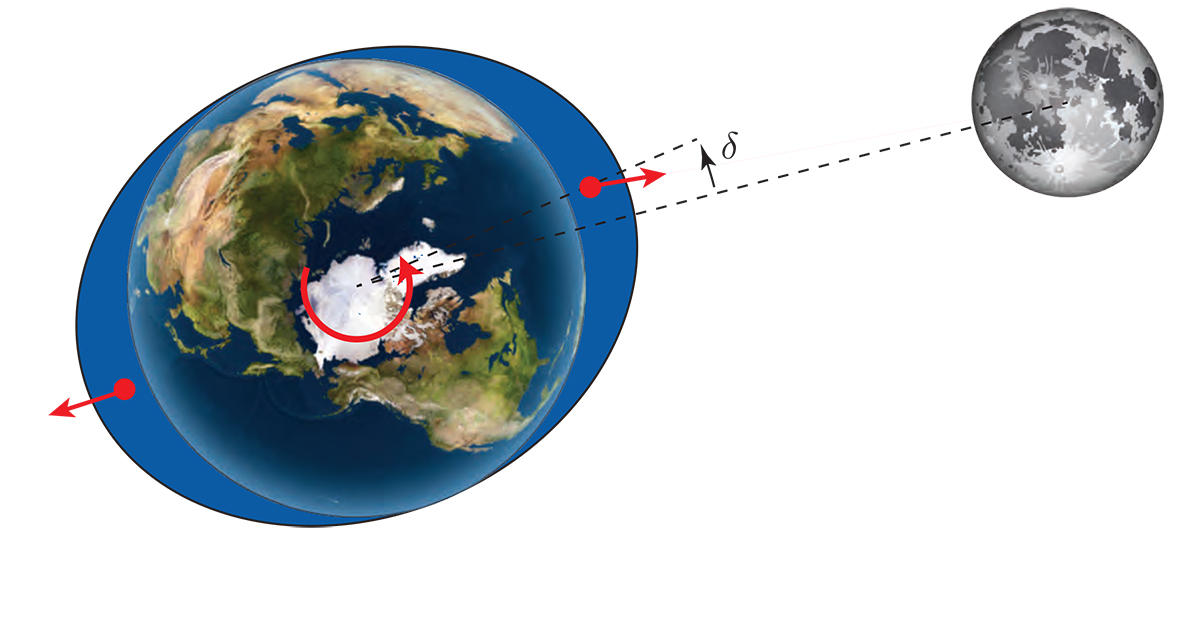 The gravitational pull of the Moon creates a tidal bulge on the Earth, but since our planet is not perfectly elastic and is spinning rapidly, there is a persistent phase lag between the bulge and the direction of the Moon (the angle shown in the diagram). The bulge produces a restoring force on the Earth's rotation, which gradually slows down over time.
J. Laskar et https://commons.wikimedia.org/
J. Laskar et https://commons.wikimedia.org/
Share
Share

Nearly a century later, atomic clocks and laser measurements of the distance between the Earth and the Moon confirmed George Darwin's brilliant intuition: our days are getting longer by two milliseconds per century, while the Moon is moving away from our planet by a staggering 3.83 centimetres each year.

However, this hypothesis raises a number of questions. “When we go back in time using George Darwin's model, we find that the Moon apparently formed 1.5 billion years ago,” explains Jacques Laskar, CNRS senior researcher at the Institute for Celestial Mechanics and Computation of Ephemerides (IMCCE).1 “And yet experimental data shows that the Moon is 4.4 billion years old”, as evidenced in particular by the first precise dating of the lunar rocks brought back by the Apollo missions. This paradox has puzzled scientists ever since the 1970s… until a team of IMCCE researchers eventually solved it.

“We present the first consistent model of the Earth-Moon system that fits both the true age of the Moon and the speed at which it is currently moving away,2” says Laskar, who is the coordinator of the interdisciplinary project AstroGeo,3 funded by the European Research Council. This is a remarkable feat that required no less than ten years of hard work on the part of the scientists, as well as successive doctoral theses by Pierre Auclair-Desrotour, now an associate astronomer at the IMCCE, and Mohammad Farhat, the lead author of the paper.

The discrepancy between the actual age of the Moon and that calculated with Darwin's tidal model showed that the latter was incomplete. In Darwin's model, the coefficient used to work out the speed at which the Moon is moving away is constant. In the new model, this is no longer the case. Instead, it's as if the “brake pedal” (resulting from the tidal force) had been alternately applied and then released, meaning that the slowing of the Earth's rotation has varied significantly over time. But which parameters determine these oscillations? And how can such changes in the strength of the tidal force be explained?

A physical model of the Earth with two parameters

In an attempt to define these factors, the researchers looked at how the oceans absorb tidal energy. Basically, the force that slows the Earth's spin is friction on the ocean floor. The team therefore constructed their physical model in a surprisingly simple way, by dividing the Earth into two hemispheres, an ocean and a supercontinent. As we move back in time, these evolve over the past billion years as a result of continental drift, and then merge into a global ocean in the very earliest times. Only two parameters are then required to describe the evolution of the Earth's rotation: the dissipation of tidal energy on the ocean floor, and the depth of the ocean. 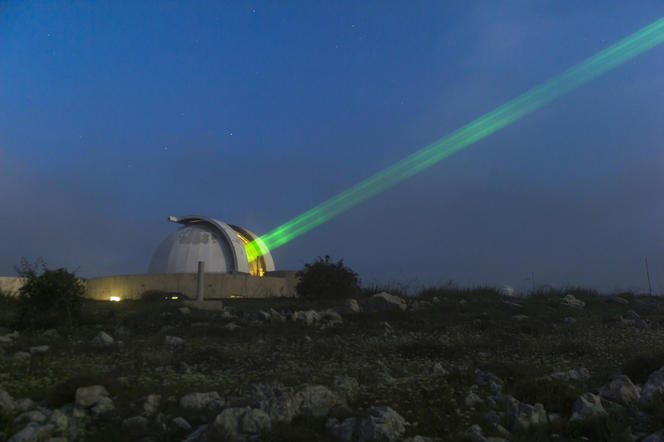 In the 1970s, measurements made using a laser beam (like this one at the Côte d'Azur Observatory) confirmed George Darwin's intuition: the Moon is moving away from the Earth by 3.83 centimetres per year. 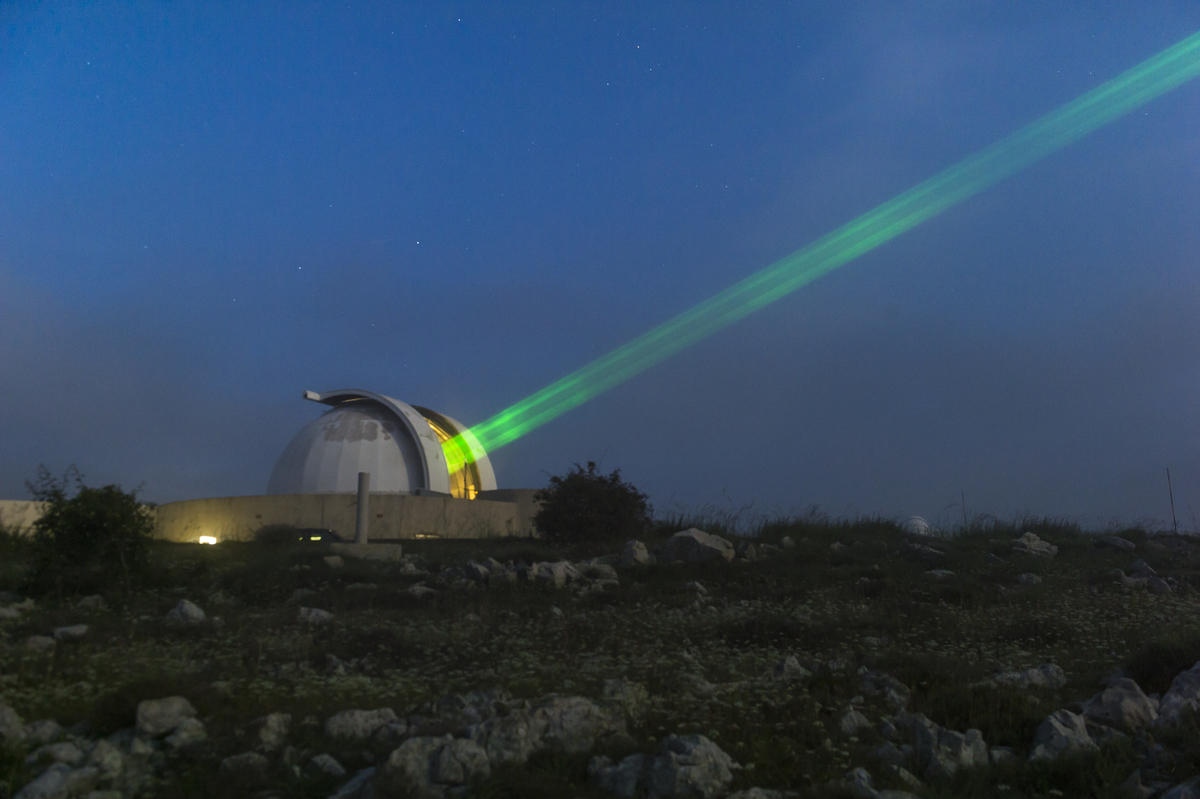 Once their model was up and running, the scientists needed to test it against real data, and show that their equations realistically described the changing tidal force. To do this, they relied on evidence collected by geologists. It turns out that certain sedimentary deposits have recorded the frequency of tides at different times in Earth's history, while other geological records indicate changes in the orientation of the Earth's rotation axis, a parameter that depends on the Moon's gravitational pull. The researchers were thus able to compare the curve produced by their model with this stratigraphic data. According to Laskar, this acid test for their model showed that it “matches the most accurate geological data very well”. This result will now make it possible to determine the Earth's rotation speed at any time since it first acquired a moon. Better still, it will also allow the experts to tell how the distance between our planet and the Moon has varied over the past few billion years. “Our work will contribute to refining models of tides and enable us to gain a better understanding of how they have changed throughout Earth's history. It will also help us to improve the stratigraphic data that describes the orientation of the Earth's axis in the distant past,” Laskar adds. However, the impact of these findings could well extend way beyond the Moon and the Sun. Pending some adjustments, it should prove possible to apply this new model to ocean tides on exoplanets.

Slideshow
Ten samples that have marked the history of chemistry
Physics