Site of the Very large telescope (VLT), on the summit plateau of Cerro Paranal mountain in the Atacama desert in Chile. In its interferometric version, the VLT can merge beams emanating from a number of telescopes. It subsequently becomes a VLTI (Very large telescope interferometer). The astrophysical details revealed by the VLTI are equivalent to those obtained by a virtual telescope 130 m in diameter.
Florentin MILLOUR/CNRS Photothèque
Share
Share
The initial data gathered by the instrument GRAVITY, for a star near the giant black hole located at the center of our galaxy, confirms the predictions of general relativity in the most extreme conditions.

Formulated in 1915 by Albert Einstein, the general theory of relativity has been successfully tested on a number of occasions. But are its predictions valid in the intense gravitational field generated by a massive body such as a black hole? Some disturbances of space-time anticipated by the theory have never before been observed.

Achieving this confirmation was the objective of a number of international programs seeking to observe Sagittarius A*, the supermassive black hole at the center of our galaxy. This was notably the case for an international team that includes members from the LESIA1 and IPAG2 laboratories of the CNRS. The researchers used the instrument GRAVITY from the Very Large Telescope (VLT) at the ESO in Chile to observe, over the course of two years, the movement of a star orbiting close to this body, which has a mass four million times that of our sun. They subsequently announced in the journal Astronomy & Astrophysics3 the first demonstration of the Einstein shift caused by Sagittarius A*. Also known as gravitational redshift, the Einstein shift is an effect predicted by general relativity, and affects light sources exposed to a gravitational field, translating for the external observer into a shift toward longer wavelengths for the spectral lines that are characteristic of the light emitted by the source. This is called redshift because this color corresponds to the larger wavelengths of the light spectrum visible to humans.

A cosmic monster at the center of the Milky Way

Sagittarius A* was detected in 1974, in an area rich in gas and dust 25,000 light years from the Earth. Astronomers have detected intense light emissions in this area of the sky on a number of occasions, which could have been produced by highly accelerated and heated matter falling within the gravitational field of a supermassive body. They also discovered in the same location a number of stars orbiting at high speed around an invisible object, which must exert extraordinary gravity in order to prevent them from escaping.

This is the case for the closest star, S2. Completing an entire revolution in only sixteen years, after a previous passage in April 2002, the star should have returned to its pericenter—or the point where its orbit is the closest to the black hole—on May 19, 2018. S2 is subject to intense acceleration at that point, reaching a speed of 8000 km/s, or 2.7% the speed of light! The GRAVITY instrument’s team, an international collaboration bringing together a number of German, French, and Portuguese laboratories,4 was ready and waiting.

Built on the Cerro Paranal mountain (Chile) and operational since 2016, this interferometer operating in near-infrared combines light beams from four 8-meter telescopes belonging to the VLT. This makes it possible to capture images of unparalleled resolution, equivalent to that produced by a telescope 130 meters in diameter. 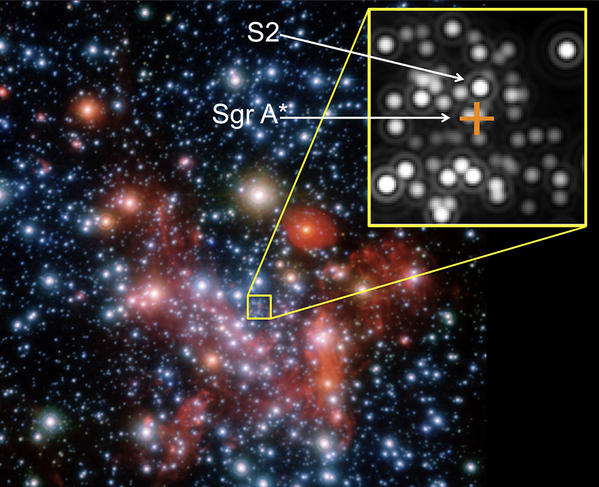 The central regions of our galaxy observed in near-infrared. In 2018, the S2 star passed very close to the black hole Sgr A* (orange cross). Observation of the star made it possible to probe the intense gravitational field generated by the black hole, and to thereby test Einstein’s general theory of relativity. 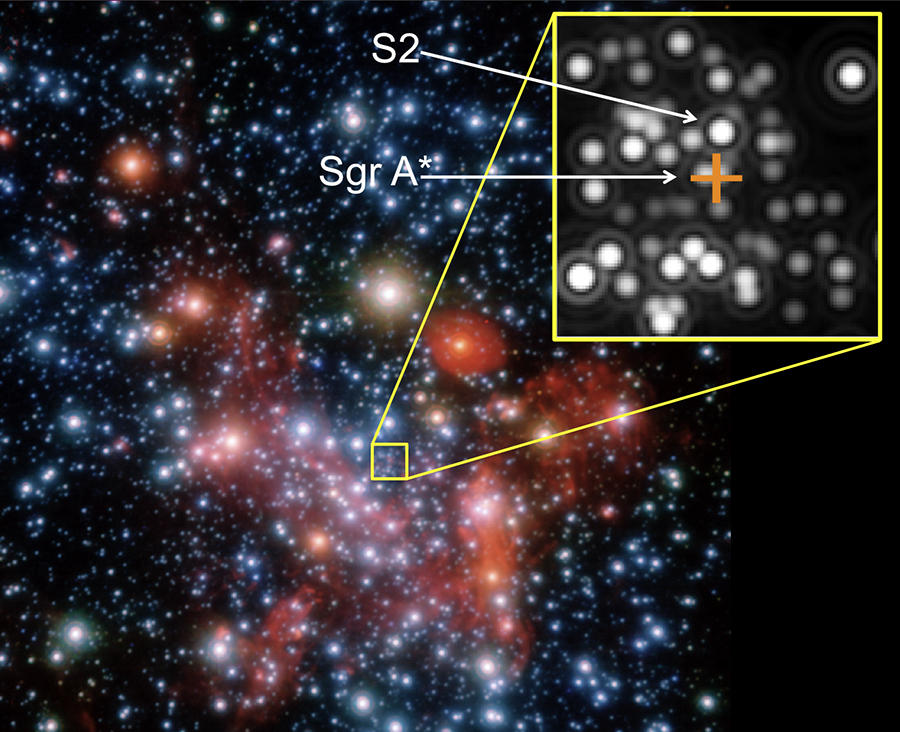 The central regions of our galaxy observed in near-infrared. In 2018, the S2 star passed very close to the black hole Sgr A* (orange cross). Observation of the star made it possible to probe the intense gravitational field generated by the black hole, and to thereby test Einstein’s general theory of relativity.
ESO/MPE/S. Gillessen et al.
ESO/MPE/S. Gillessen et al.
Share
Share

While monitoring the light emissions associated with Sagittarius A*, GRAVITY observed S2’s position at regular intervals. Astronomers also analyzed the data from the VLT’s SINFONI spectrometer, which has been analyzing the star’s light spectrum for two years. Thanks to the accurate knowledge of S2’s orbit—made possible by the GRAVITY instrument—the team calculated the exact scope of this disturbance, thereby demonstrating the famous Einstein shift.

“This study shows that the extreme precision of the GRAVITY interferometer can be used to measure the relativistic phenomena of an object as far away as Sagittarius A*,” points out Guy Perrin, an astronomer at LESIA’s Paris Observatory, and co-investigator of the instrument GRAVITY. “It is important to keep in mind that despite its tremendous mass, a black hole of this size is confined within a sphere of 0.1 AU, or barely one tenth the distance between the Earth and the sun. Yet the objective is to estimate its properties from 25,000 light-years away!”

Detecting the Einstein shift is only a first step. In fact, over the coming months the researchers will continue to observe S2’s position in hopes of demonstrating the existence of another relativistic effect in the presence of a black hole: the anomaly of the pericenter’s advancement. This anomaly, which corresponds to a shift in the star’s orbit, could provide information on the quantity of matter present near Sagittarius A*. It would subsequently be possible to determine if the latter is composed of gas, other smaller black holes, or even dark matter. It could even possibly resolve the mystery of the origin of galactic black holes, or that of the possible limits of Albert Einstein’s general theory of relativity.

Article
Artemis: To the Moon and beyond
astrophysics

Article
The Principle of Equivalence Put to the Test

Article
A New Window to the Universe