Home / Articles / The Principle of Equivalence Put to the Test

The Principle of Equivalence Put to the Test

Home / Articles / The Principle of Equivalence Put to the Test

The Principle of Equivalence Put to the Test

Artist rendering of Microscope, the CNES microsatellite.
CNES/ill./DUCROS David, 2016
Share
Share
The Microscope satellite was placed in orbit this April. Its mission: test once more the principle of equivalence, a pillar of the theory of general relativity that postulates that all objects fall in the same way in a vacuum. Could Microscope be the first to invalidate it?

Summer of 1971, on the Moon. The US astronaut David Scott drops a feather and a hammer on the Moon floor, and both reach the ground simultaneously. A hommage to Galileo's mythical experiment—which probably never took place! Back to the seventeenth century, in Italy. From the top of the tower of Pisa, the Italian scholar is said to have thrown a lead ball and a wooden ball, which both touched the ground at the same time. This led him to conclude that in a vacuum, all bodies fall with the same acceleration, whatever their mass or composition. A counter-intuitive result to say the least...

This universality of free fall in fact postulates the equivalence between two types of mass: gravitational mass, which determines a body’s resistance to gravitational pull, and inertial mass, which corresponds to its capacity to resist a change in its movement. The relation between these two masses would thus always be the same, hence explaining why all bodies subjected to the same gravitational field fall at the same speed in a vacuum.

Developed by Isaac Newton as part of his law of universal gravitation in 1686, this observation would later be established as a principle by Albert Einstein. In 1915, he even made it the foundation of his theory of general relativity, which was to revolutionize physics. The implications of this principle of equivalence are indeed huge. Firstly, it supports the idea that acceleration can mimic a gravitational field. To illustrate this, Einstein used the image of a large box or windowless room placed in space, outside any gravitational field, and subject to an acceleration equal to that of gravity. Its occupants would find themselves pinned to the room's floor. In the absence of any external visual cue, they would not know whether they are within the Earth's gravitational field, or subjected to acceleration. And should they drop any objects, these would follow the same trajectory as they would on Earth. 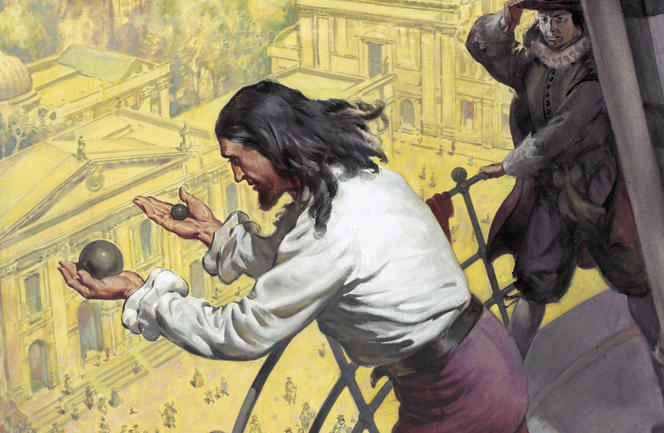 Illustration by James Edwin McConnell (1903-1995) depicting Galileo’s demonstration of the principle of equivalence from atop the tower of Pisa in 1591. 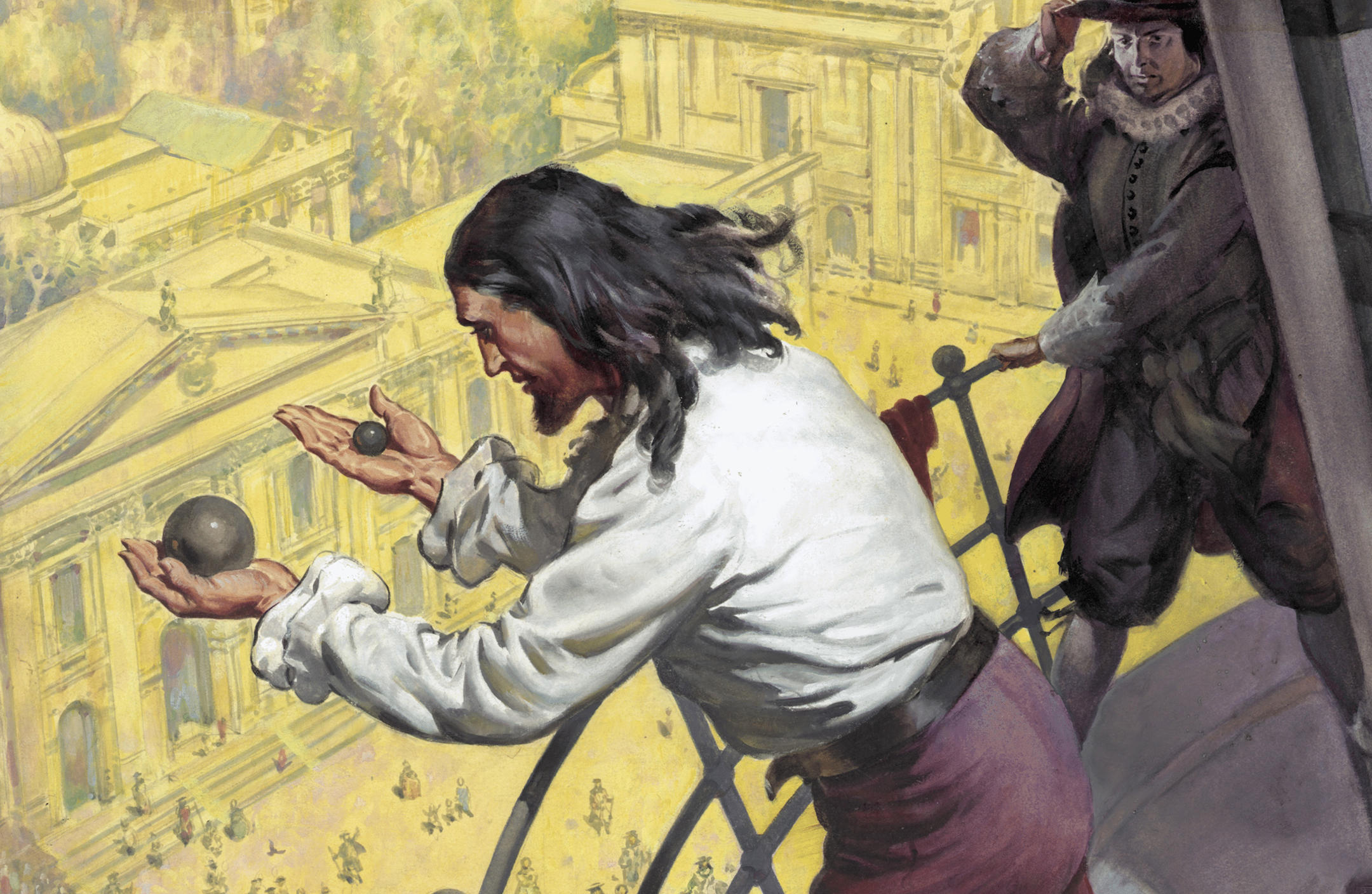 "The principle of equivalence led to the theory of general relativity, which states that gravitation is no longer a force exerted by one object on another, but rather a deformation of the very structure of space-time!" explains the theoretical physicist Thibault Damour, who is a member of the Académie des sciences, and a professor at the Institut des hautes études scientifiques.

Throughout the centuries, numerous experiments have confirmed this principle of equivalence. In fact, Galileo apparently deduced it by timing balls falling along descending slopes...Yet Newton verified it as early as 1687, by observing that pendulums of equal length with bobs made of different materials indeed swung at the same speed, with a precision to three decimal points. In 1889, using more sophisticated pendulums (torsion pendulums), the Hungarian physicist Loránd Eötvös confirmed it to eight decimal points. "In 2008, the US Eöt-Wash group of physicists refined the principle of the torsion pendulum with beryllium and titanium, and was able to reach a precision to thirteen decimal points, the current record!" points out Gilles Métris, an astronomist at the Géoazur1 laboratory.

Why then continue to verify? Because if the theory of general relativity perfectly describes gravitational interaction, it is not the case for the other three interactions governing particle physics, controlled by quantum mechanics and unified in the famous Standard Model. Yet the theories being developed in a bid to unify these four interactions—such as string theory—all predict a violation of the principle of equivalence at some point. 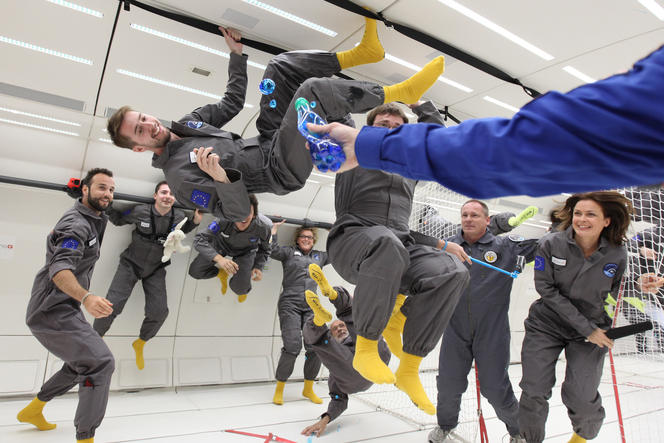 Application of the equivalence principle: parabolic flights simulate weightlessness for a few seconds. 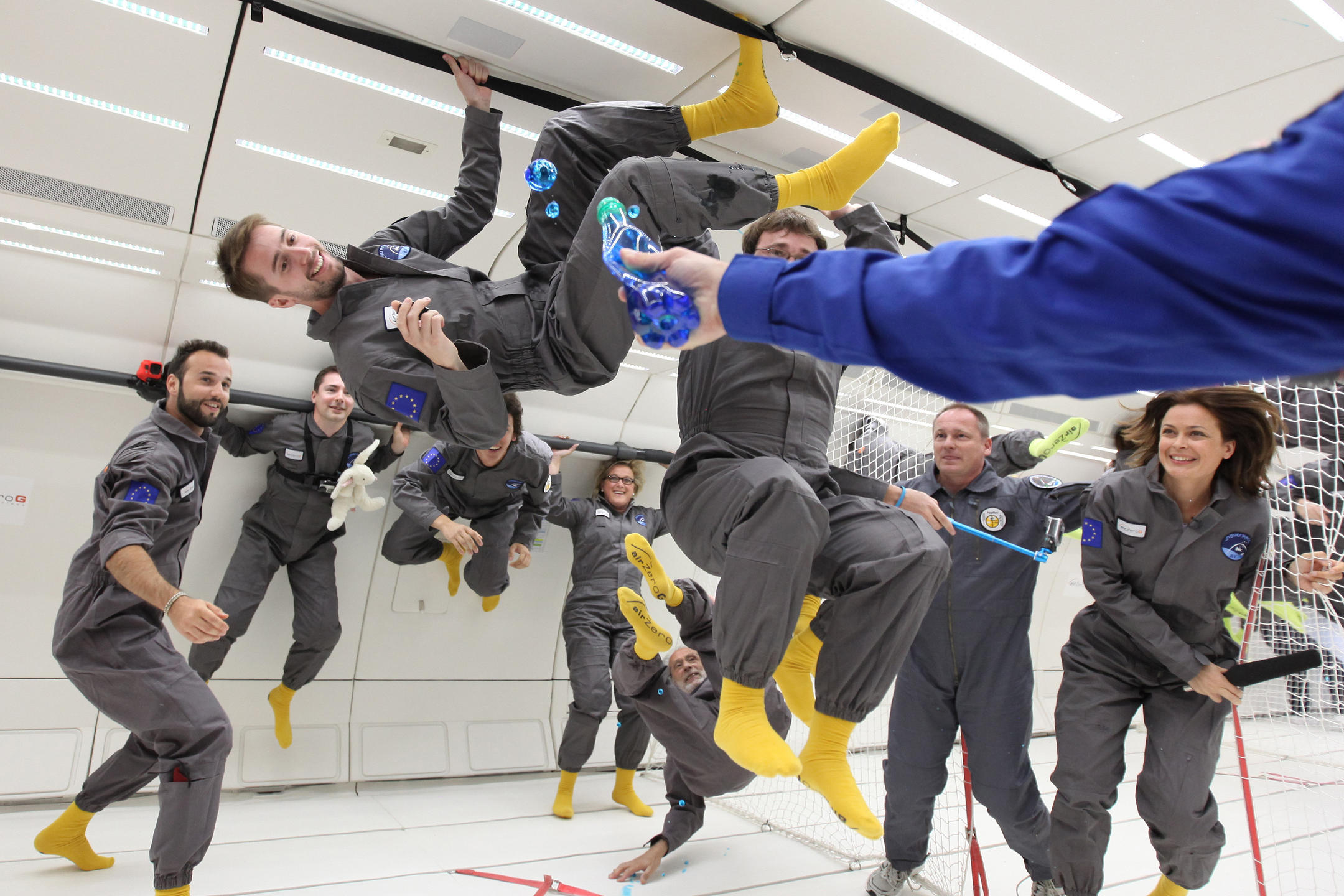 This is the reason why new projects are underway—this time directly in space, using satellites in permanent free fall, far from terrestrial disturbances. Among them is the CNES microsatellite, Microscope,2 which will be put into orbit in the coming days, at an altitude of 700 kilometers. "Our goal is to verify the principle of equivalence on two different materials, titanium and platinum, with a precision to fifteen decimal points!" explains Métris, principal co-investigator of the mission.

Our goal is to verify the principle of equivalence with a precision to fifteen decimal points.

In practice, the experiment will actually force both masses to follow the exact same trajectory thanks to a double electrostatic accelerometer. "Should different accelerations prove to be necessary, this will mean that the principle of equivalence is violated," says Métris. Weighing a total of 300 kilograms, the microsatellite will be equipped with microthrusters using cold gas and capable of offsetting the most infinitesimal disturbances to trajectory that could potentially distort the results.

"Should Microscope observe a violation of the principle of equivalence, this would reinforce string theory, according to which the Universe has additional space dimensions," enthuses Thibault Damour. "This indeed implies the existence of fields other than that of gravitation, capable of altering physical constants in time and space—constants which we are unable to explain today."

However, even if Microscope were to once again confirm the principle of equivalence, physicists have not had their final say. Other, even more ambitious space projects are indeed in the pipeline. While awaiting a decision from the European Space Agency by 2018, the STE-Quest3 mission proposes to verify the equivalence principle on the atomic level, by putting different types of atoms into freefall in space. In the US, a space mission project named STEP4 plans to use three pairs of different materials at cryogenic temperatures to reach a precision to eighteen decimal points! Enough to put an end to this tremendous scientific saga initiated 400 years ago.

Jean-Philippe Braly is a science journalist specialized in health and life sciences, the environment, ecology, nature and new technology. He is a regular writer for CNRS Lejournal/News, La Recherche, press agencies Canopy and Look at Sciences. He also produces documentaries for the radio station France Culture, and hosts of a variety of conferences and round tables...