Some patients, already sedated and intubated, need to be laid on their abdomen so that they can breathe better. This manoeuvre, called prone positioning, is particularly complex and exhausting for care staff.
Nicla SETTEMBRE/CUESIM - HVL
Share
Share
The relief of patients suffering from Covid-19 requires technical gestures that can contribute to the exhaustion of healthcare staff. The ExoTurn project seeks to help them through the use of exoskeletons.

While the Covid-19 pandemic was at its height in eastern France, the Intensive Care Unit at Nancy University Hospital doubled in size within just one month, from 22 to 46 beds. Some patients, already sedated and intubated, developed acute respiratory distress syndrome (ARDS) because of the disease, a serious condition which required them to be laid on their abdomen to help them breathe. However, this manipulation, called prone positioning, is particularly complex.

A tricky and exhausting manoeuvre for care staff

Inert patients must be handled with extreme care because they are intubated, infused and equipped with electronic sensors, in addition to being contagious. The procedure therefore needs to be implemented slowly and involves up to six people who, as well as working in a stressful environment, find themselves in uncomfortable positions and under heavy loads for many minutes. Performed just a few times a week under normal circumstances, the frequency of this procedure increased to tens of times a day. Bruno Chenuel, Professor of Physiology at the Université de Lorraine and department head at Nancy University Hospital, therefore recruited seventy-five volunteer staff to help the intensive care teams. The groups worked in shifts, each performing between eight and fifteen manoeuvres daily, although the numbers peaked above twenty at the height of the crisis. The cumulated weight of the people turned exceeded thirty tonnes each day. 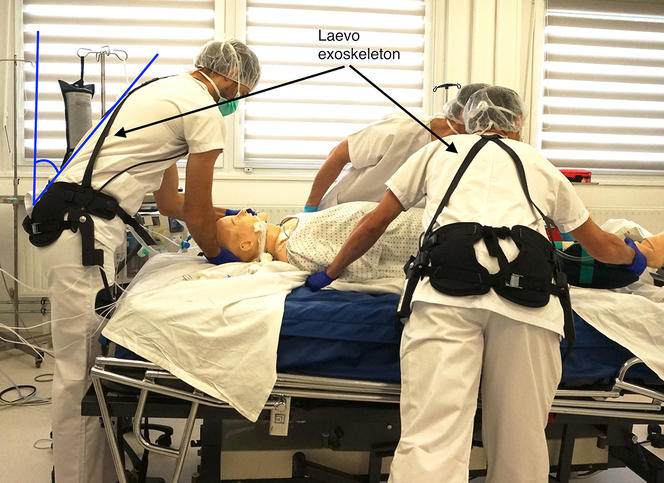 Physicians training in prone positioning while using the Laevo exoskeleton and working on a simulated, intubated and infused patient with a realistic weight, at the Lorraine Virtual Hospital. 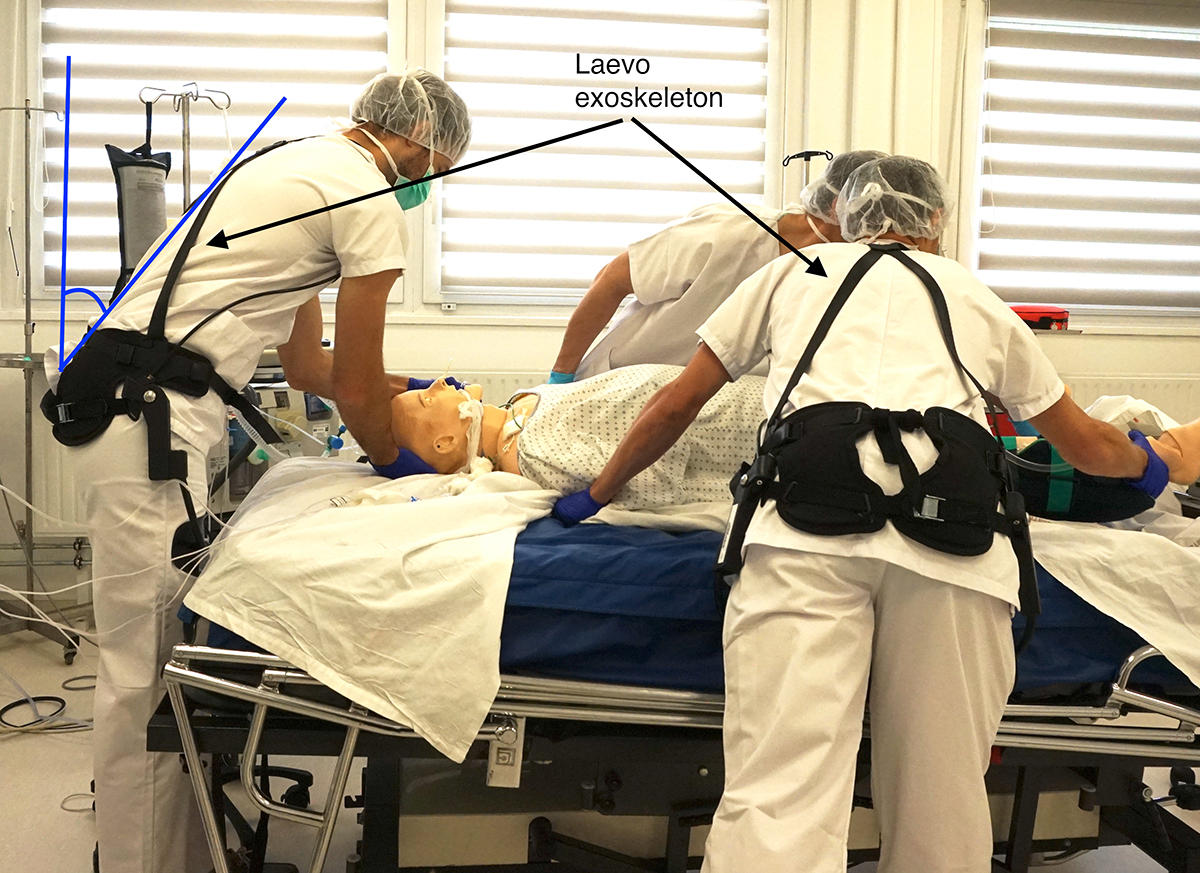 Nicla Settembre, a Nancy University Hospital vascular surgeon involved in these support teams, thus contacted Serena Ivaldi, an INRIA researcher at the Lorraine Laboratory of Research in Computer Science and its Applications (LORIA).1 “I had known her for several years, and we had always thought of using cutting-edge technologies to help physicians,” Settembre explains. “We discussed it together, and decided to resort to exoskeletons.” They thus launched the multidisciplinary ExoTurn project, which brings together physicians and scientists from Nancy University Hospital, the Université de Lorraine, INRIA, CNRS and INRS, the reference body for occupational risk prevention in France.

“Repeated prone positioning manoeuvres are tiring for care personnel and can cause back pain,” Ivaldi points out. “We studied similar cases in the manufacturing and automobile industries. However, in the present case, it was necessary to add the stress induced by the responsibility for handling patients and by the risks of contamination. Even young and very fit doctors were suffering from back pain by the end of the day.” Scientists and physicians therefore turned to the INRS, which proposes different commercial models of exoskeletons and has strong expertise in their use in the workplace. Designed to provide physical support, these systems are worn like a garment or armour, depending on their degree of complexity. They are indeed divided into two categories: active exoskeletons are powered by motors that make them much more powerful but also more expensive, and they require a power source. Passive exoskeletons tend to be based on elastic or spring systems.

The ExoTurn team preselected four exoskeletons after an initial video study of the postures involved, particularly in order to understand which joints are under the most pressure. This work, published in the Annals of Physical and Rehabilitation Medicine, showed that care staff spend up to 40% of the duration of a prone positioning procedure with the torso bent more than 20% forward. To relieve these exhausting positions, Pauline Maurice, a CNRS researcher at the LORIA, contributed her skills in movement analysis, which she had already applied to the study of exoskeletons. “Sensors measure how the exoskeleton modifies movements and efforts, but we also need to check what people think of them”, she insists. “The sensors don’t provide any cues regarding comfort and restriction of movement.” 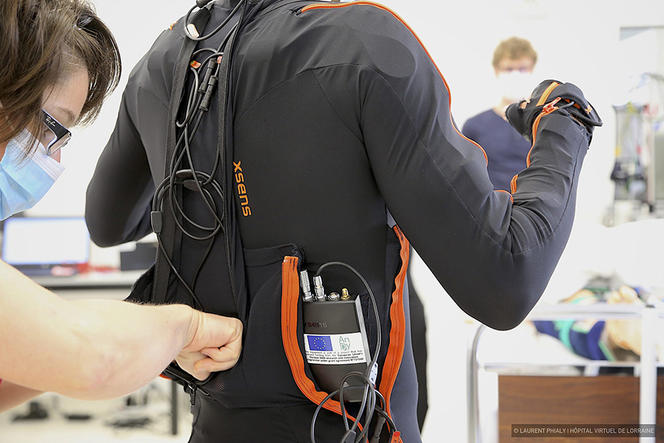 This exoskeleton is equipped with sensors that measure its influence on the movements and efforts made by hospital care staff during the manipulation (Xsens sensors). 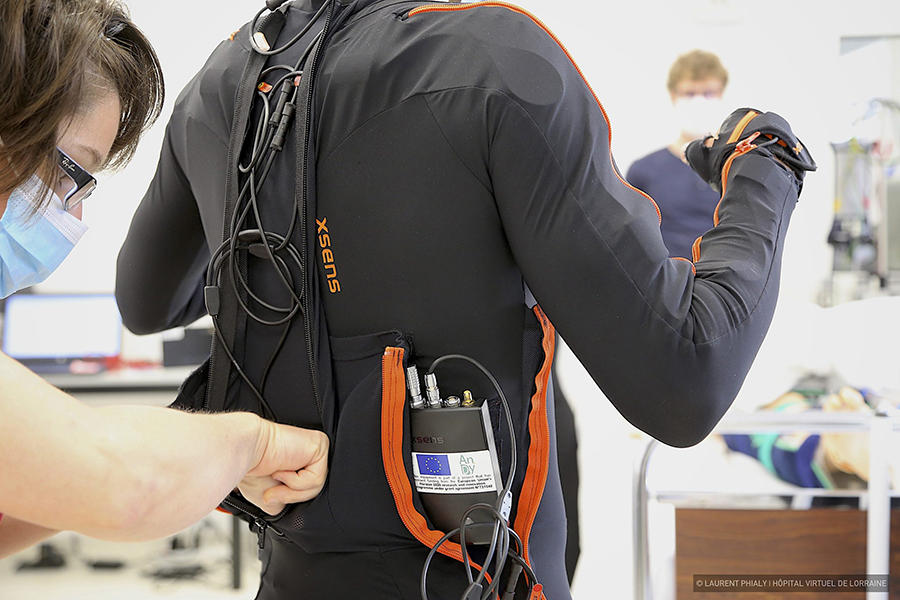 The exoskeleton must also be compatible with the conditions in an intensive care unit; personnel need to be able to wear it together with personal protective equipment; it must not hamper their movements or cause any risk of catching on the numerous tubes and cables attached to patients. The four systems chosen were subsequently taken to the CUESim virtual hospital simulation centre, in northeastern France, where Nicla Settembre is a lead trainer. There, an intensive care unit designed for the training of physicians houses intubated and infused simulated patients with a realistic weight.

After a battery of tests, the Laevo model was selected. Used in logistics, it accumulates energy by means of a system of springs at hip level, which enables it to spread the strain on the back to the thighs and sternum when the wearer leans forward. Reducing this effort by just a few percent is sufficient to provide considerable relief to the lower back. Because it is light, this exoskeleton also has the advantage of not hampering the work of care staff. “Exoskeletons had already been deployed on patients, but this is the first time they have been used by practitioners and have proved of considerable assistance,” Settembre explains. “The success of this initiative has encouraged us to pursue this collaboration not only in the context of the current crisis, but also to investigate the benefits of exoskeletons for care personnel in general.”

Article
Pasteur beyond the legend
Engineering

Article
Harvesting Energy for the Internet of Things
Exoskeleton

Article
Takes Two: Why We Learn Better Together