Dinosaur Footprints on a Cave Ceiling

Dinosaur Footprints on a Cave Ceiling

These footprints from the Middle Jurassic were found during a potholers’ outing.
Rémi Flament/Journal of Vertabrate Paleontology
Share
Share
The footprints of sauropods, thirty-metre-long herbivorous dinosaurs, have been found on the roof of a cave located beneath the Causse Méjean plateau, in southeastern France. CNRS News talked to the palaeontologist Jean-David Moreau, who has published an article about this astonishing discovery.

One day in December 2015, a goup of amateur potholers entered the Castelbouc cave, in the Lozère department in southeastern France, for what turned out to be no ordinary outing. For inside the cavern, which is very popular with novice cavers and only accessible via a long, narrow passage, they came across a treasure trove that had remained unobserved for millions of years: the tracks of huge dinosaurs, clearly visible on the roof of the “great tunnel”, a chamber 80 metres long, 20 metres wide and 10 metres high. 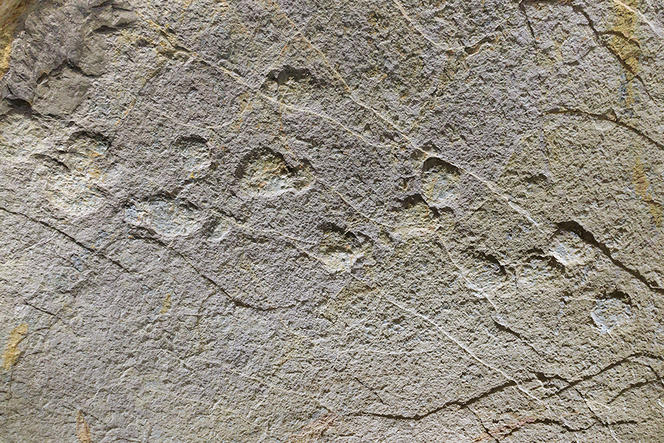 The biggest footprints are 1.25 metres long. 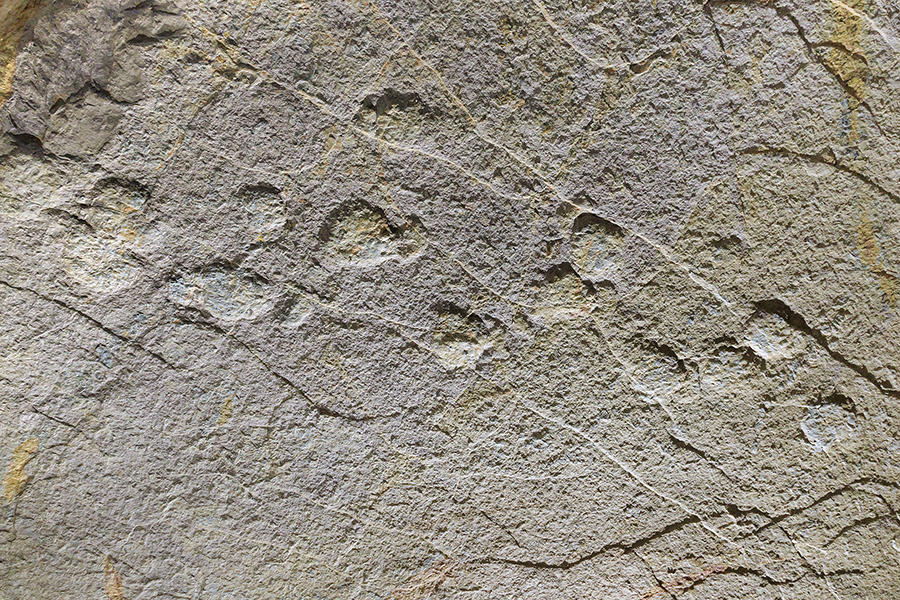 “What’s so incredible is that thousands of people have passed through this cave without ever seeing a thing,” says a still dumbfounded Jean-David Moreau, a palaeontologist at the Biogeosciences Laboratory1 in Dijon (northeastern France) who, as head of the Lozère Palaeontology Association, organised the potholers’ outing that day. “All it took was for one person to take a closer look than usual at the ceiling, and there they were, clearly visible: the tracks of footprints apparently made by giant dinosaurs.”

Identifying them with the light from their headlamps alone was no easy task, and Moreau and his team had to return several times to confirm their amazing find: three twenty-metre-long trails left by sauropods, four-legged herbivorous dinosaurs from the Middle Jurassic, 170 million years ago.2
“In two of the trackways, you can see alternate foot- and handprints, the hands being identified by their half-moon shape. Some of the footprints show five toes as well as claws,” the scientist explains. “The largest are 1.25 metres in length, making them among the biggest ever identified worldwide, and were made by animals that must have measured around 30 metres.”

The discovery is unprecedented in more ways than one. To begin with, giant dinosaur prints had never been previously discovered in a cave anywhere in the world. But it is also the first time that sauropod footprints have been found in the Causses basin, even though palaeontologists have already uncovered a wealth of trace fossils there. The region, with an area of several hundred square kilometres and straddling the departments of the Aveyron, Lozère, Gard and Hérault, boasts dozens of trace fossil sites. However, no vestige of the giant herbivores had ever been spotted until now. 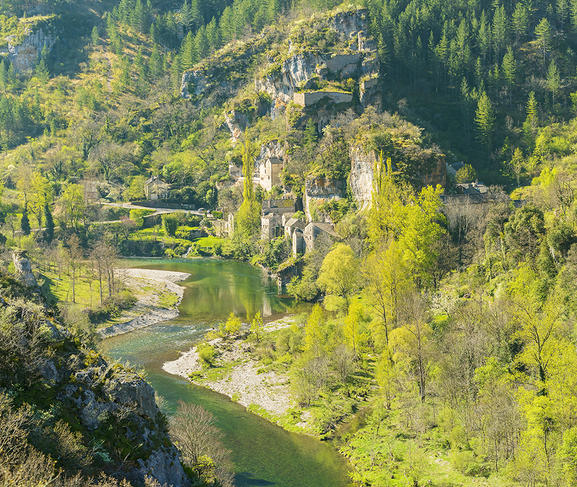 Castelbouc, in Lozère. In the Middle Jurassic, this area was on the edge of a lagoon surrounded by conifers. 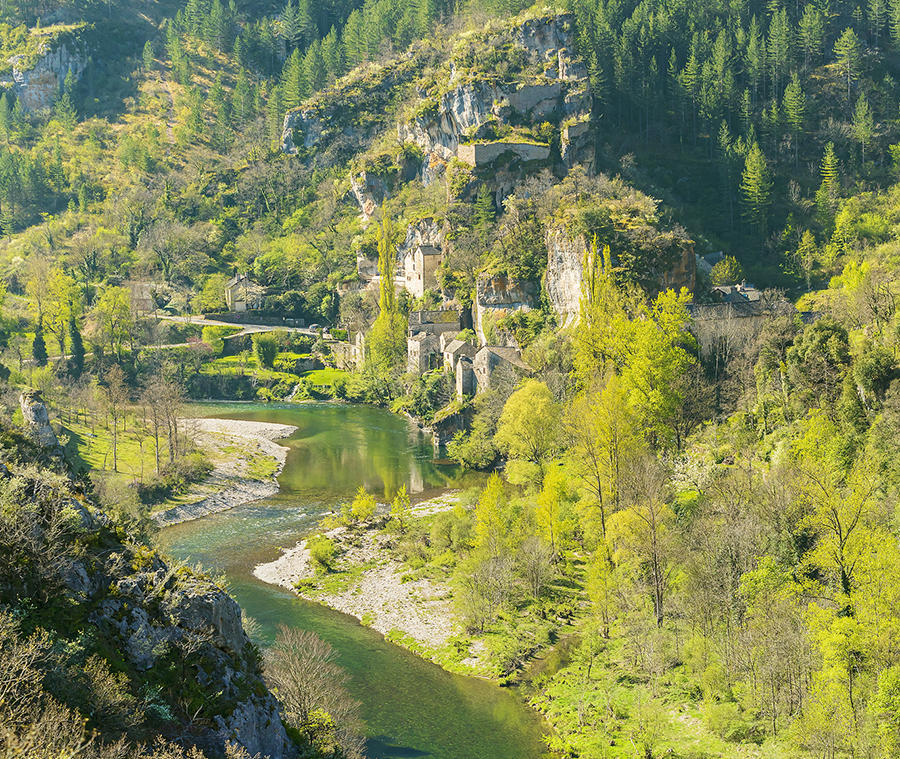 Castelbouc, in Lozère. In the Middle Jurassic, this area was on the edge of a lagoon surrounded by conifers.
Rémi Flament
Rémi Flament
Share
Share

“The Causses basin, also called the Causses gulf, recorded the entire geological history of the Jurassic, which lasted for 55 million years,” says Moreau, who is a specialist in ichnology, the branch of palaeontology concerned with the study of trace fossils. “During this period, the sea retreated three times from the region, enabling dinosaurs to settle there: 200 million years ago, 168 million years ago – when the Castelbouc tracks are dated – and 145 million years ago.”
Sediments accumulated over time, and geological layer after layer was laid down. Millions of years after the dinosaurs lived there, water infiltrated the limestones and clays of this karst environment, eventually forming the hundreds of natural cavities found in the Causses. Which explains why dinosaur tracks can be seen on the roof of a cave, which at first might appear somewhat counter-intuitive!

“There hasn’t been any upheaval in the geological strata. The trails that we see are actually casts, corresponding to the base of the sauropods’ feet,” Moreau explains. “It’s as if you were looking at the tracks left by the dinosaurs from below. What happened is that infiltrated water eroded the rock beneath the sedimentary layer which contains the footprints.” 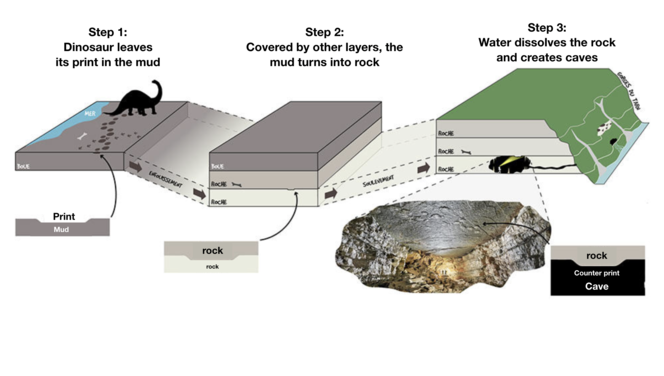 Finding footprints on the roof might seem counter-intuitive… but can be easily explained in these caves hollowed out in limestone. 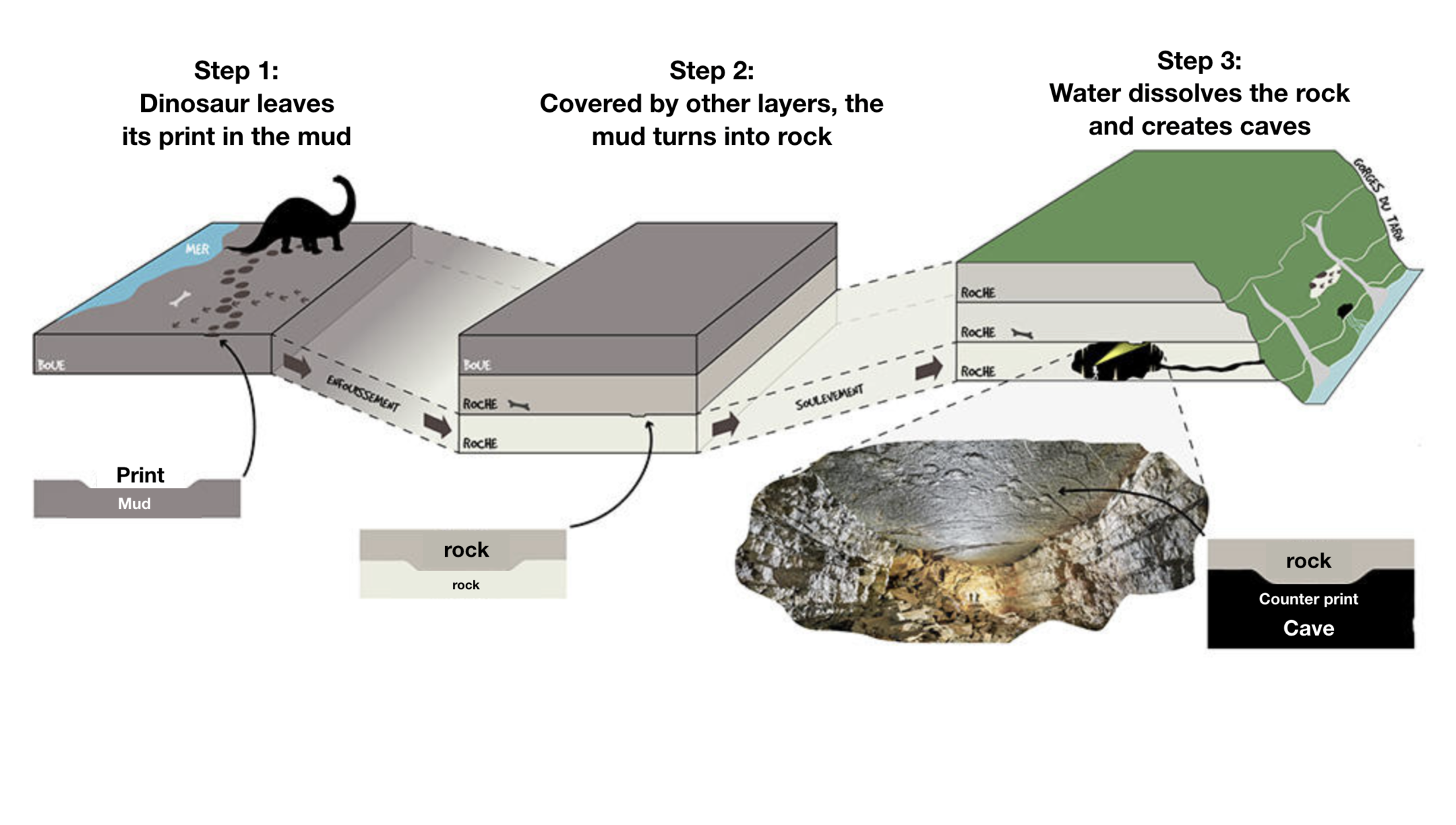 The palaeontologist, who specialises in plant fossils as well as trace fossils, was able to reconstruct the ecosystem in which the sauropods lived 170 million years ago. “We found plants, in particular remains of conifers, and small remnants of saltwater fish. An analysis of the sediments carried out in the cave told us that it was at the land-sea interface, probably on the edge of a lagoon surrounded by conifers.”

The excitement generated by the discovery has nurtured the researcher’s passion for the geologically rich region of the Grands Causses, where he hopes to find more traces of the sauropods’ presence.   “As well as continuing to explore the surfaces and outcrops where footprints are traditionally found, we’ll now be taking a very close look at the roofs of the abundant natural cavities in the area,” says Moreau, who has already started to encourage the region’s potholers to be on the lookout for fresh evidence.