Cruzy (southern France), 72 million years ago. The image shows titanosaurs (left background), an ankylosaurus (left foreground), a group of rhabdodon, and a pair of variraptors.
Nikolay ZVERKOV, pour la revue "Espèces"
Share
Share
The town of Angeac, near Angoulême in southwestern France, is hardly a household name. Yet it has a claim to fame, as this is where the bones of one of the world's largest dinosaurs were discovered. In fact, palaeontologists have already identified the skeletons, eggs or fossil footprints of some twenty species of these “terrible lizards” all over France.

In late June 2018, the Sainte-Victoire geological reserve, near Aix-en-Provence (southeastern France), was a hive of activity as the annual excavation campaign organised at the foot of the famous mountain immortalised by the painter Cézanne was coming to a close. For palaeontologists, the surrounding red clay soils have proved to be a real gold mine ever since excavations began in 2010. In addition to the hundreds of dinosaur eggs exhumed—a specificity of the region, aptly dubbed “Eggs-en-Provence” by foreign researchers—the 74 million-year-old site has yielded several dozen bones from eight specimens of rhabdodon, a 3 to 4-metre-long herbivorous dinosaur that was widespread in the late CretaceousFermerThe Cretaceous is a geological period of the Mesozoic (or secondary) Era which lasted from 145 million years ago to 66 million years ago.: herds of these “Cretaceous cows” used to graze peacefully on the plains of what is now the South of France.

While the area around Aix-en-Provence has already produced several thousand fossilised eggs (but no embryos, much to the disappointment of palaeontologists, who would like to find out more about the growth cycles of these species), as well as superb specimens of Cretaceous dinosaurs such as pyroraptor, a type of small, two-legged carnivore discovered following a forest fire, Provence is not the only region in France to have been home to the dinosaurs, or “terrible lizards” (from the Greek deinos, “frighteningly big”, and sauros, reptile). 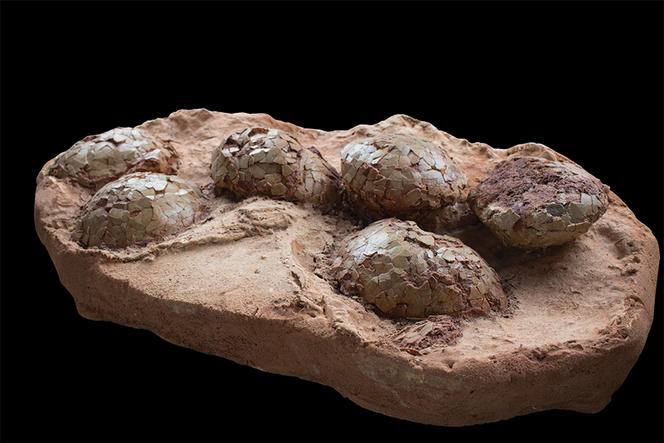 Dinosaur eggs discovered in 2000 in the city centre of Aix-en-Provence (southeastern France). 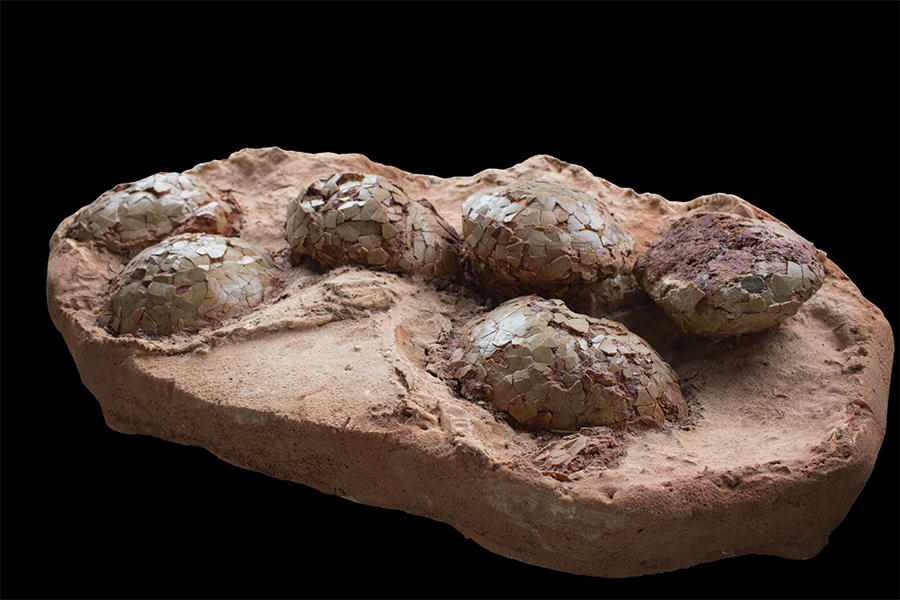 Some 1,000 sites discovered since the 19th century

"Although the general public is often unaware of it, and French palaeontologists themselves have been slow to take an interest, France is one of the most dinosaur-rich countries in Europe, if not the world," says Éric Buffetaut, a palaeontologist at the Geology Laboratory of the ENS.1 Ever since the famous French naturalist Cuvier discovered the first dinosaur fossils in the early 19th century (without realising it, since dinosaurs were only named and identified as a group in their own right in 1842), some 1,000 dinosaur sites have been discovered in France, in regions as diverse as Normandy, Lorraine, the Jura, Provence, and Languedoc-Roussillon. "Most have only given up a few bones, whereas others—the majority of which have been excavated over the past twenty years—have yielded as many as several thousand fossils," Buffetaut explains.

There are now around half a dozen active excavation sites in France. Among them, Angeac was the big surprise of the last decade: it was in a sand and gravel pit there that were unearthed the bones of the largest dinosaur ever found in France (and one of the biggest in the world), a splendid specimen exceeding 35 metres in length, whose femur alone measured an astounding 2.20 metres.

This large sauropod (one of the seven dinosaur families), which lived in the very early Cretaceous, 140 million years ago, was more impressive than dangerous: it was actually a harmless herbivore. It was not the only dinosaur to have roamed the Angeac region: over eight years of excavations, nearly 8,000 fossil bones were found at the bottom of the quarry, in the geological stratum located directly beneath the sand and gravel. 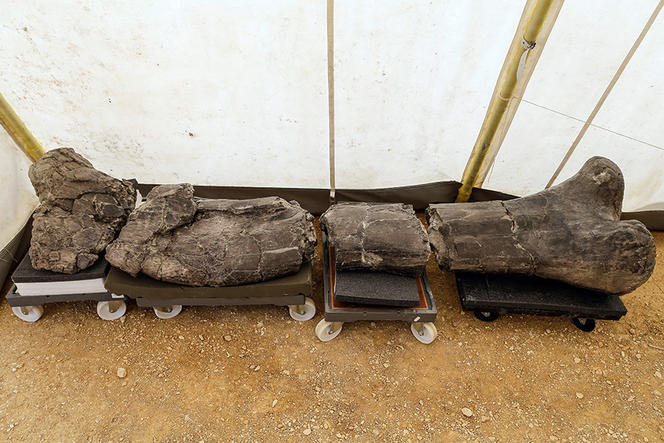 Unearthed in Angeac (southwestern France) in 2010, this 2.20-metre-long femur belongs to one of the world's largest dinosaurs: a giant herbivore whose length exceeded 35 metres. 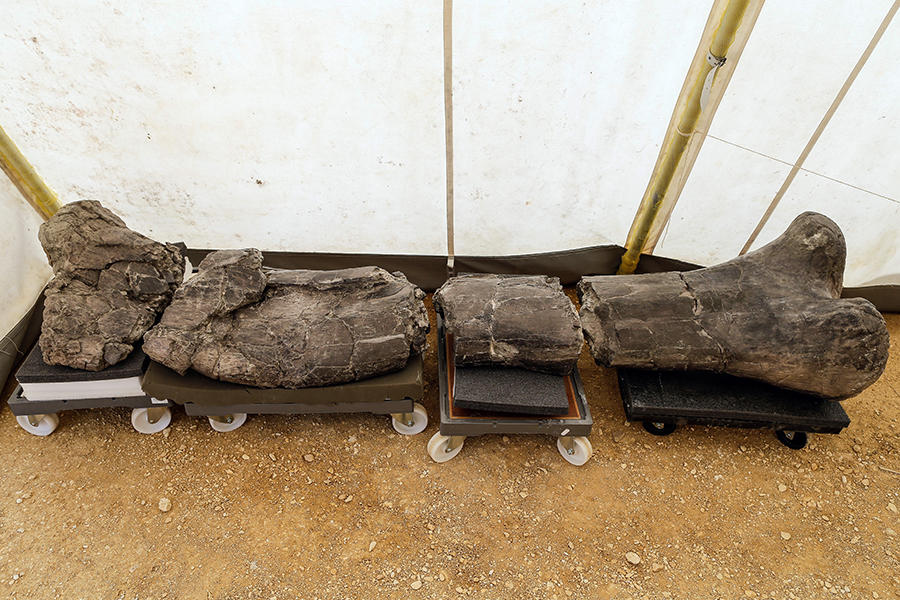 "We have uncovered an entire semi-tropical ecosystem," says Ronan Allain, a palaeontologist at the French National Museum of Natural History’s  Center for Research on Palaeobiodiversity and Palaeoenvironments (CR2P),2 who leads the Angeac excavations. “In addition to dinosaurs, we have found not only turtles, crocodiles and mammals, but also the plants that were part of their environment, such as ferns and a 10-metre-long fossilised conifer trunk. We are looking at a period that immediately preceded the appearance of flowering plants, in a marshy area where the bodies of dead animals were trapped, facilitating the process of fossilisation.” Indeed, for a skeleton to become fossilised, it needs to be protected from destructive agents such as air, sun, wind and so on.

Four sauropods, whose species remains to be characterized, have already been identified at Angeac, along with nearly 50 specimens of ornithomimosaurs, “ostrich dinosaurs” of a type previously unknown to paleontologists. These two-legged carnivores measured about three metres in length, had a 1.50 metre-long tail, and a completely toothless beak. They belonged to the great family of theropods (like the above-mentioned pyroraptor, but also the mighty North American tyrannosaurus), initially thought to have been exclusively carnivorous, although some may have become omnivores over the course of evolution, researchers now believe. 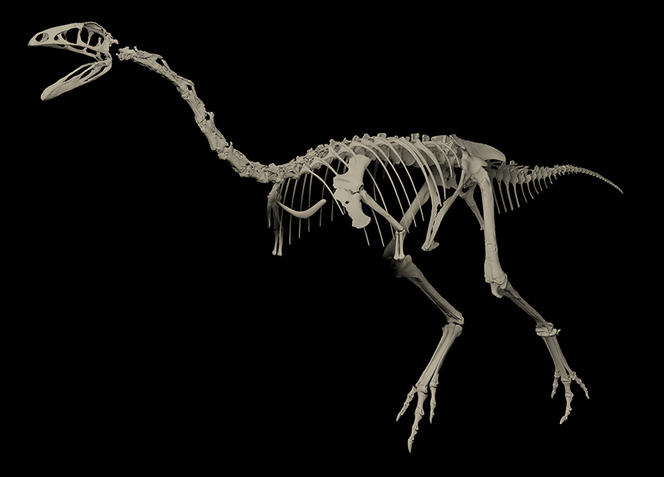 Nearly 50 specimens of ornithomimosaurs, carnivorous dinosaurs as large as ostriches, have been uncovered in Angeac. 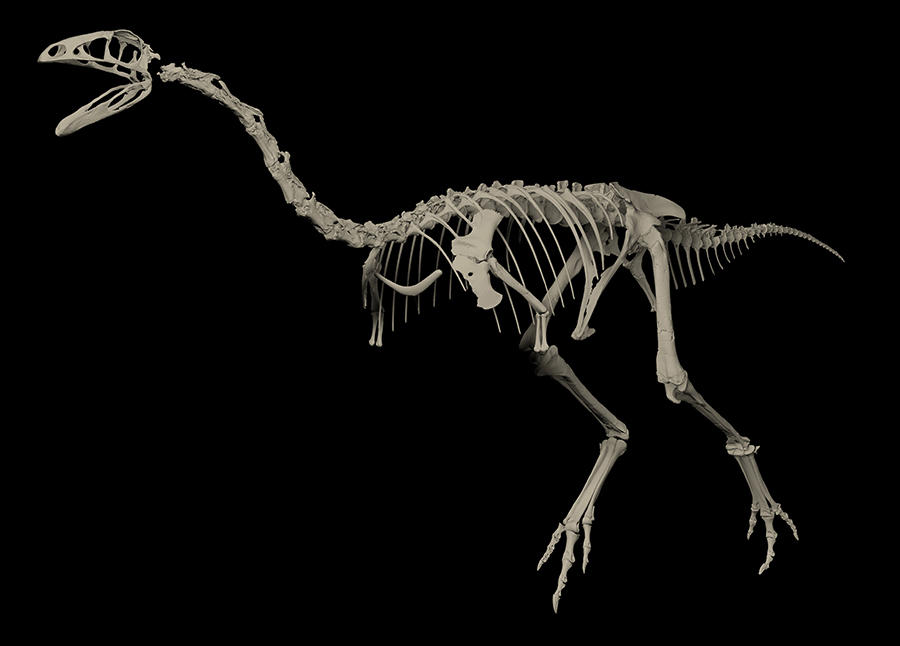 "In France, we are lucky enough to have dinosaur fossils that span this group’s entire 150 million years of existence," says palaeontologist Jean Le Loeuff, who is the curator of the dinosaur museum in the southwestern French town of Esperaza (Aude). The oldest, found especially in the Jura region in Eastern France, date from the Triassic period and are 220 million years old. They are plateosaurs, the ancestors of sauropods. The most recent fossils lived 66 million years ago, just before the mass extinction that marked the end of the Cretaceous and that of all dinosaurs (with the notable exception of birds, which are still with us today).

"Of course, France and Europe as we know them today didn’t exist at that time," Le Loeuff adds. “The first Triassic dinosaurs lived in Pangaea, which was then Earth’s only continent. From the Late JurassicFermerThe Jurassic is a geological period of the Mesozoic (or secondary) Era which spanned from 201 million years ago to 145 million years ago. onwards, the Europe where these terrestrial animals were found was in fact an archipelago, and France itself was divided into several islands.” One of these included the Armorican Massif and the Massif Central, while the Jura, Normandy, the Paris and Aquitaine Basins were beneath the sea for much of the Jurassic and Cretaceous, only emerging for brief periods.

It is in fact on the banks of what was then a lagoon that the longest sauropod tracks in the world were discovered. The 155 metre-long trackway, consisting of 110 one-metre-long footprints, was uncovered in the village of Plagne (Jura) on a vast limestone plateau. "The footprints were left in the mud 150 million years ago, at the very end of the Jurassic, by a 35- to 40-metre-long sauropod. They dried out in the sun, and were then covered again by the sea, which facilitated their mineralisation," says Jean-Michel Mazin,3 a palaeontologist who co-authored an article published by Geobios magazine in November 2017. 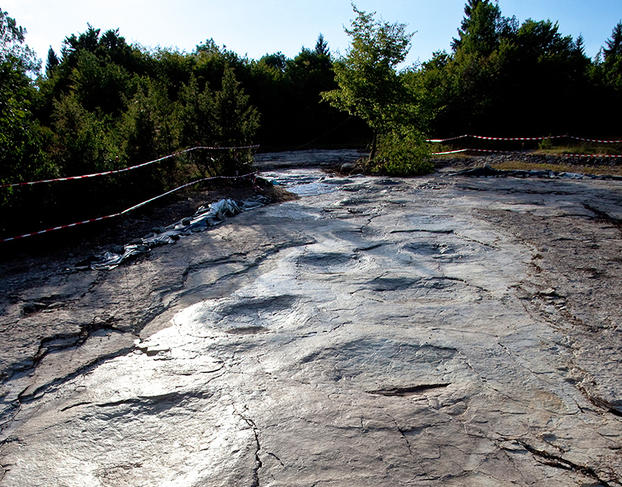 In the Jura (eastern France), this trackway, made by a titanosaurus 150 million years ago, is made up of 110 footprints, each one metre long. 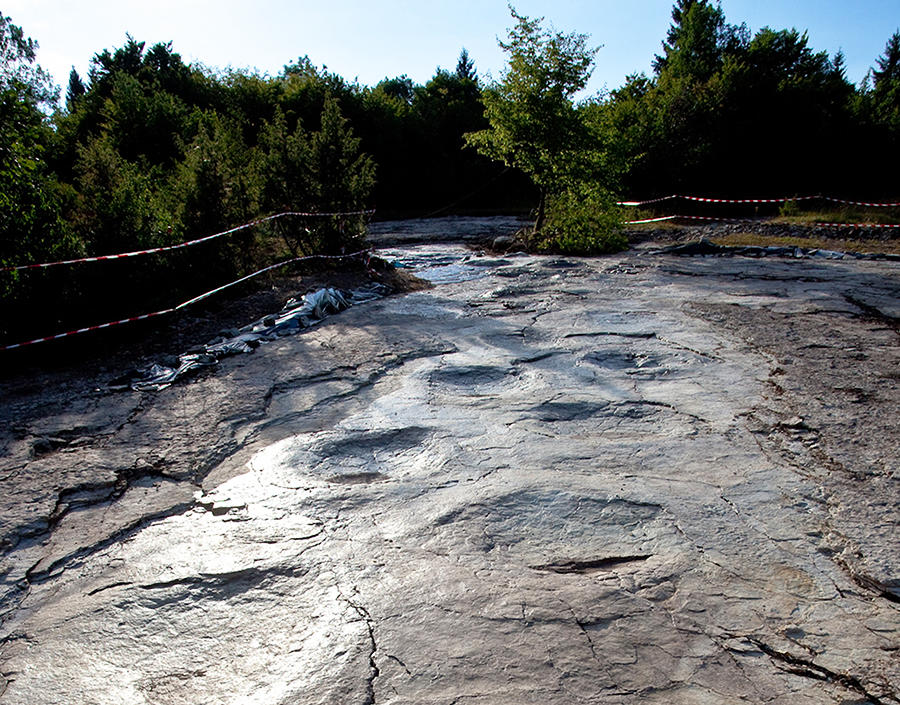 Long seen as something merely of interest to amateurs, the footprints are now considered as scientific material in their own right, providing evidence which supplements that from the fossilised bones. "Although studying an individual specimen’s bones and teeth makes it possible to determine its anatomy, age, type of diet and so on, fossil footprints tell us not only about its mode of locomotion—how it moved and at what speed—but also about its social behaviour, whether it was solitary or gregarious,” Mazin explains. “For instance, in the case of a social animal, we would expect to see several intersecting tracks.”

Whether bones, footprints or eggs, the numerous fossils discovered in France bear witness to the astonishing diversity of dinosaurs, which included bipeds and quadrupeds, animals with or without teeth, some with long or frilled necks, or armour. "At the end of the Cretaceous, there were giants up to 20 metres long and tiny specimens the size of a large chicken," Buffetaut points out.

Like all dinosaurs, the specimens found in France were warm-blooded, while their limbs were erect and held under their bodies, which they lifted to move about—a very different mode of locomotion from that of today’s reptiles. On the other hand, French palaeontologists have so far found no trace of the feathers present in some small carnivorous dinosaurs elsewhere on the planet. “It’s probably only a matter of time,” Allain believes.

For France is far from having unlocked all the secrets of its dinosaurs. "Every time we undertake a serious excavation somewhere, we have our work cut out for decades!” says Le Loeuff, who speaks from experience: he has spent the last 25 years exploring a 70 million year-old late Cretaceous site at Campagne-sur-Aude (southwestern France), where the famous ampelosaurus or “vineyard lizard,” a large herbivore measuring some 15 metres in length, was discovered. "I just went there to carry out a small survey, following the accidental discovery of a bone by a hunter. By my reckoning, we have unearthed more than 7,000 fossils since then!” 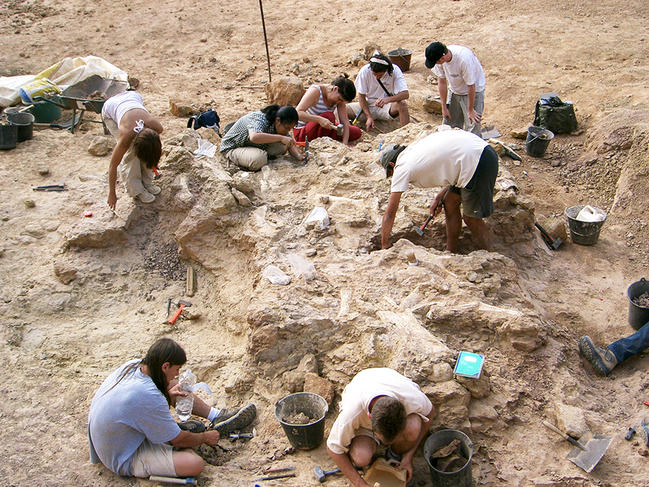 The skeletons of several ampelosaurus or “vineyard dinosaurs” have been found in Campagne-sur-Aude (southwestern France). This one, which is shown in the process of being excavated, is 60% complete. 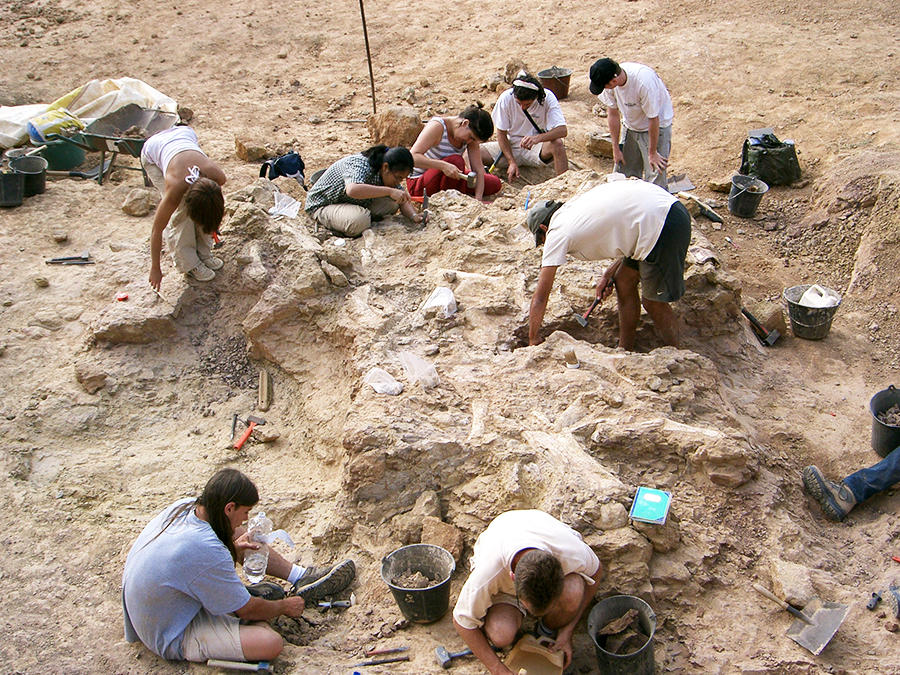 Much the same thing happened at the site of Cruzy, near Béziers in southern France, where a large stone used by a winegrower to wedge his tractor turned out to be the femur of a dinosaur. "Since excavations began in 2008, we have uncovered a whole range of wildlife from 72 million years ago," says Buffetaut, in charge of the project. “As well as titanosaurs (sauropods with large bony plates), rhabdodon, ankylosaurs (armoured dinosaurs), and birds (already present at that time!), we’ve discovered turtles, crocodiles, lizards and so on."

Palaeontologists’ only regret is that so few complete skeletons have been unearthed in France. "This is due to the mode of preservation of the bones we’ve found, most of which fell into river beds or were washed to the bottom of the sea, inevitably leading to their dispersal," Mazin points out.

To date, about twenty types of dinosaur have been characterized in France, and the same number are awaiting description (and names) to join the ranks of the thousand or so species already identified the world over. According to the handful of French “dinosaurologists”, there aren’t enough specialists in the country to analyse the accumulated fossil material—unlike in China, which has deployed huge resources in recent years: having dinosaurs has become a matter of prestige!

"And yet, dinosaurs are great ambassadors of science," says Le Loeuff. “They were the largest land animals ever to have lived on Earth, and they witnessed 150 million years of our planet's history, i.e. most of the Mesozoic era.” It was long believed that dinosaurs were poorly adapted because of their size. But nothing could be further from the truth. The fact that they lived on Earth for so long proves that they were actually unrivalled masters of adaptation.