For over two years, researchers carried out more than 2650 diving expeditions to study the state of coral in the Pacific.
Pete WEST/Bioquest Studios/Tara Expeditions Foundation
Share
Share
After two and a half years sailing across the Pacific to draw up the first-ever global inventory of coral reefs, the schooner Tara has now returned to Lorient (Brittany), her home port in northwestern France. Serge Planes, a world authority on corals, delves into these remarkable ecosystems that are now under threat from global warming.

What was the main objective of the Tara Pacific expedition, which brought together 70 international experts in marine ecology, cell and molecular biology, genomics and bioinformatics, and of which you were the scientific director?
Serge Planes:1 The idea underpinning this exploratory mission was to take a fresh look at the coral reefs in the Pacific by studying them, not at the macroscopic level as is commonly the case, but at the microscopic scale. This shift in focus was needed in order to better understand the complex and still poorly known relationships between these animals and the micro-organisms that live inside or around them and help to maintain their health. What we refer to as the coral microbiome comprises a wide range of viruses, bacteria, fungi and, above all, unicellular algae called zooxanthellae that live in the tissues of corals, providing them with food and giving them their vivid colours. Uncovering the chemical and genetic characteristics of coral populations from a multitude of sites, some of which are very remote and little—or not at all—studied, should enable us to obtain an accurate picture of the global diversity of these environments. It will also help us to assess their health and measure their ability to adapt to the effects of climate change, such as increasingly intense El Niño phenomena, ocean acidification, and rising sea levels, as well as to more direct human disturbance, such as poor coastal management, agricultural run-off, and overfishing. To do this, we travelled over 100,000 kilometres, collected specimens from 32 islands in 26 countries, made more than 2,650 dives, and brought back over 30,000 samples. These included coral tissue from three very different species found throughout the Pacific, their associated fish, as well as sediments, water at different depths, etc. 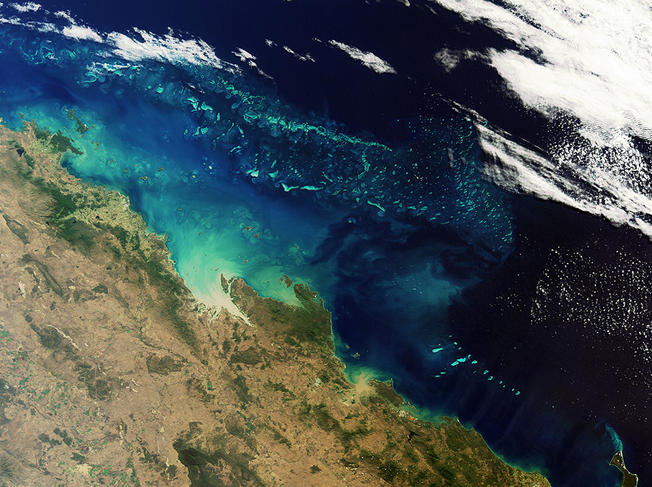 The Great Barrier Reef, the largest living structure visible from Space, is not spared by bleaching. 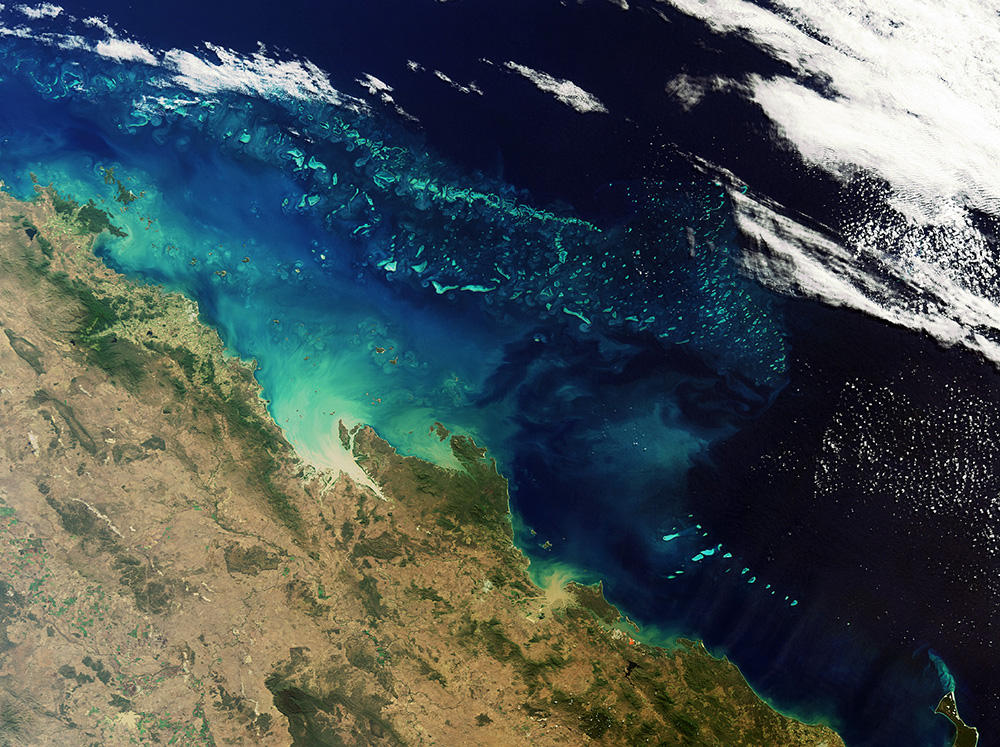 Why is there so much interest in coral reefs when they only make up 0.2% of the total surface area of the oceans?
S.P.: Because they play a vital role in providing shelter and food to 30% of the approximately 100,000 known marine species. By way of comparison, I often like to say that 1 km2 of coral reef is home to as much marine biodiversity as all the coasts of France put together! In addition, 500 million people, which is about 8% of the world's population, depend directly on them for their livelihood. Such coral assemblages, which can be seen from space, also offer exceptional protection by buffering the impact of large waves, especially during tropical cyclones, while they also limit coastal erosion and promote tourism, which in Polynesia for instance is the second largest source of income.

With regard to coral bleaching, a phenomenon caused by rising sea water temperatures that puts corals under stress and can eventually kill them, what did you observe during your journey?
S.P.: In the Pacific, bleaching has not occurred everywhere, but neither is it non-existent. What we see is a huge patchwork of contrasting, overlapping situations, with some sites in very good health, some recovering, and others where there is clearly bleaching and massive mortality, or else bleaching but no mortality. For example, we observed high coral mortality due to bleaching in the Samoan, Tuamotu and Cook Islands. However, we’re not talking about an event affecting the entire Pacific basin. I would say that almost every island group is a specific case.

More generally, what is the current state of coral reefs throughout the tropics?
S.P.: Broadly speaking, it is estimated that 20 to 25% of the reefs have disappeared irreversibly, mainly due to uncontrolled coastal development, 50% are in a critical state and 25% are in good condition. It is difficult to be more precise as figures vary greatly from one geographical area to another. Overall, the Caribbean is the most severely affected region and the Pacific is the best preserved, although bleaching episodes linked to global warming without necessarily leading to reef mortality are becoming more frequent and intense there, as well as more localised. In 2017, for instance, only the central area of the 2,300-km-long Great Barrier Reef suffered from severe bleaching, while in 2016 only the northern area was impacted. What we actually have are “warm blobs” of water a few hundred square kilometres across that cause very limited bleaching. 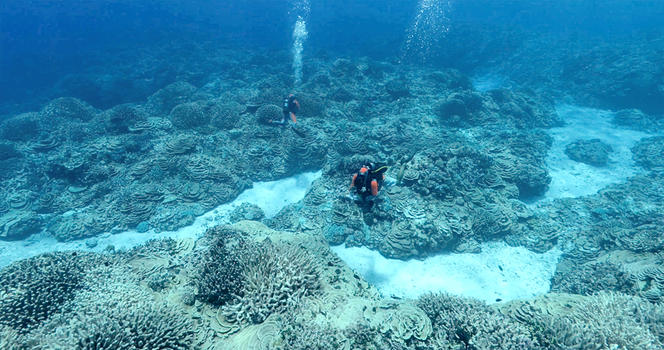 The Tuamotu Island coral reefs in the South Pacific are affected by high mortality due to bleaching. 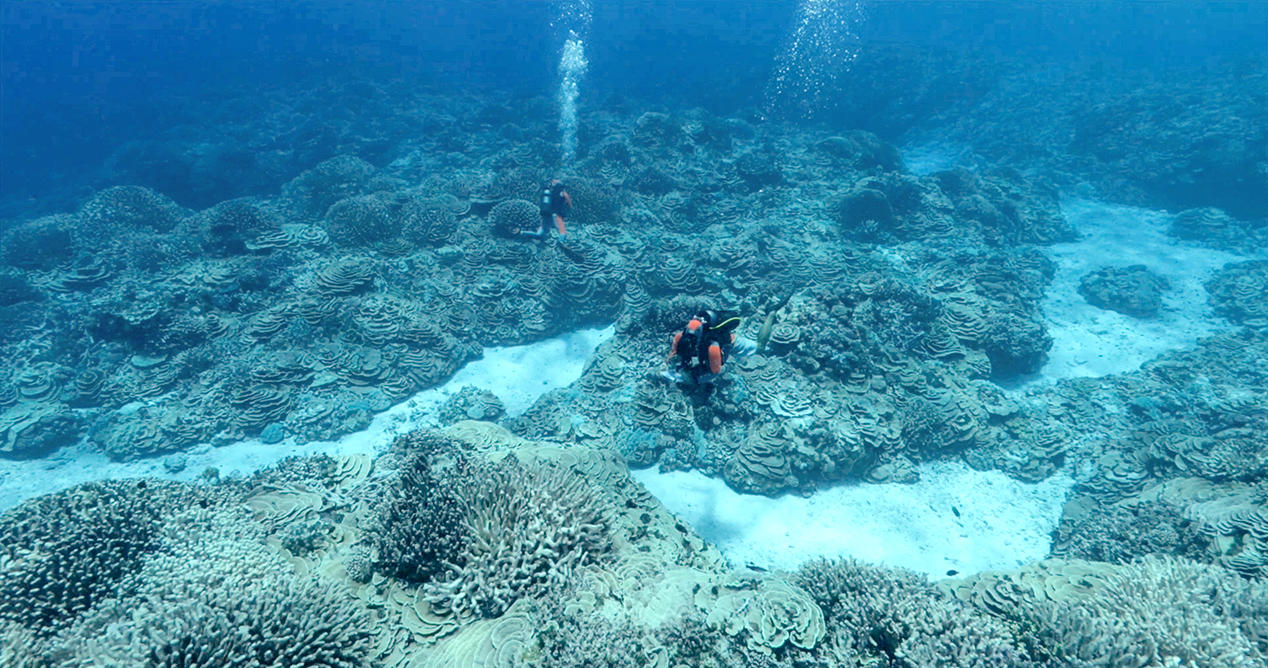 What solutions are there to protect threatened reefs?
S.P.: One thing we can do is collect eggs or baby corals, grow them in laboratories and replant them in the wild once they have reached maturity. However, we must be realistic. Although restoration operations for sites damaged by events of natural or human origin is on the rise worldwide, this sort of ecological engineering can only ever produce results over small areas. Such techniques will always have very limited effects.

Another approach aims to create ‘super-corals’ through genetic selection and hybridization techniques. What do you think of that?
S.P.: This is what is known as ‘assisted evolution’. Scientifically, it’s interesting. Ever since the Neolithic period, agriculture has always sought to create ‘mutant’ varieties that exhibit advantages, and has been based on the notion of hybrid vigour, which means that hybrid offspring show qualities superior to those of their parents. This avenue of research, which is being very actively explored in Australia and the US, should therefore be pursued. Yet it should not it be put forward as the solution. This might give decision-makers the impression that destroying coral reefs doesn’t really matter, since there will soon be ‘super corals’ able to regenerate hundreds of thousands of square kilometres.

What about the idea of submerging large numbers of tyres, a practice widespread in the 1980s-90s, aimed at creating artificial reefs?
S.P.: It’s a disaster! Used tires tied together are unable to resist swell and currents. They become scattered, damaging neighbouring ecosystems, and as they decompose they release substances that are toxic to marine organisms. Submerging concrete blocks or metal modules, which are more ‘neutral’—albeit ‘intrusive’—materials, isn’t quite so bad. But I must admit I find it difficult to understand how nature can be recreated with artificial structures, even if it remains a popular idea.

In your opinion, what should be given priority to improve the health of coral reefs?
S.P.: The most important step would be to implement genuine coastal management and planning policies. However surprising it might seem, reef protection first needs to be addressed through land-based initiatives, since coral reefs are coastal ecosystems that are directly affected by alterations to the coastline. For example, limiting the construction of large coastal infrastructures, installing retention basins downstream to prevent sediments from ending up in lagoons and blanketing corals, limiting wastewater discharge into the sea, and promoting more sustainable agriculture are all measures that could be put in place with immediate effect. This would give coral reefs time to better resist the impact of climate change, which of course we must continue to combat.

Article
Pasteur beyond the legend
Oceanography