The Gisimba Memorial Centre in Kigali was home to many Rwandan orphans until 2015. It has now become a shelter for underprivileged children.
Pierre Galinier
Share
Share
Based on the testimonies of orphans who escaped the genocide of the Tutsis in Rwanda in 1994, the historian Hélène Dumas offers a unique perspective on this key event of the 20th century.

Hélène Dumas, you have devoted yourself for years to establishing a historiography of the genocide of the Tutsi people in Rwanda, incorporating the experiences of both the victims and the perpetrators. What is the current status of efforts to memorialise the Tutsi genocide?
Hélène Dumas:1 In Rwanda, the effort began by late 1994. In the months following the end of the massacres, a genuine ‘survivor culture’ emerged, expressed in a large body of poems, songs and testimonies documented as audio or video recordings. Hundreds of thousands of sources accumulated over the years have furthered our understanding of how this collective memory has taken form since the end of the genocide. The question now is how to preserve all of these documents, along with the survivors’ own recollections. In addition, there are many notable bodies of work yet to be explored. An archive only exists when historians take an interest in it and use it in their research.

What actions has the CNRS undertaken to help establish this memory of the genocide?
H. D.: With an event of such magnitude, the duty of memory is above all a matter of history. For the historians at the CNRS, the priority remains the exploration of new sources and lines of investigation. To do that, we need to expand the critical mass of researchers in the social sciences working on the genocide of the Tutsis, which in turn means training students who can then concentrate their investigative efforts on this vast question. Although few of us in France are focusing on the topic, there is a great deal of research on the history of the massacre. In 2019, as part of the commemoration of the 25th anniversary of the tragedy, the Raymond Aron Center for Sociology and Politics (CESPRA), obtained a ‘doctoral contract’ that is now enabling a young researcher to write her thesis on the subject. 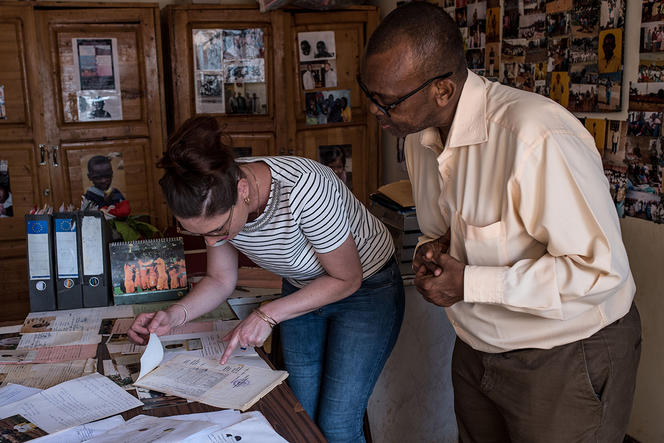 Hélène Dumas, pictured here with Damas Gisimba, director of the centre, goes through the archives of the orphanage in April 2019. 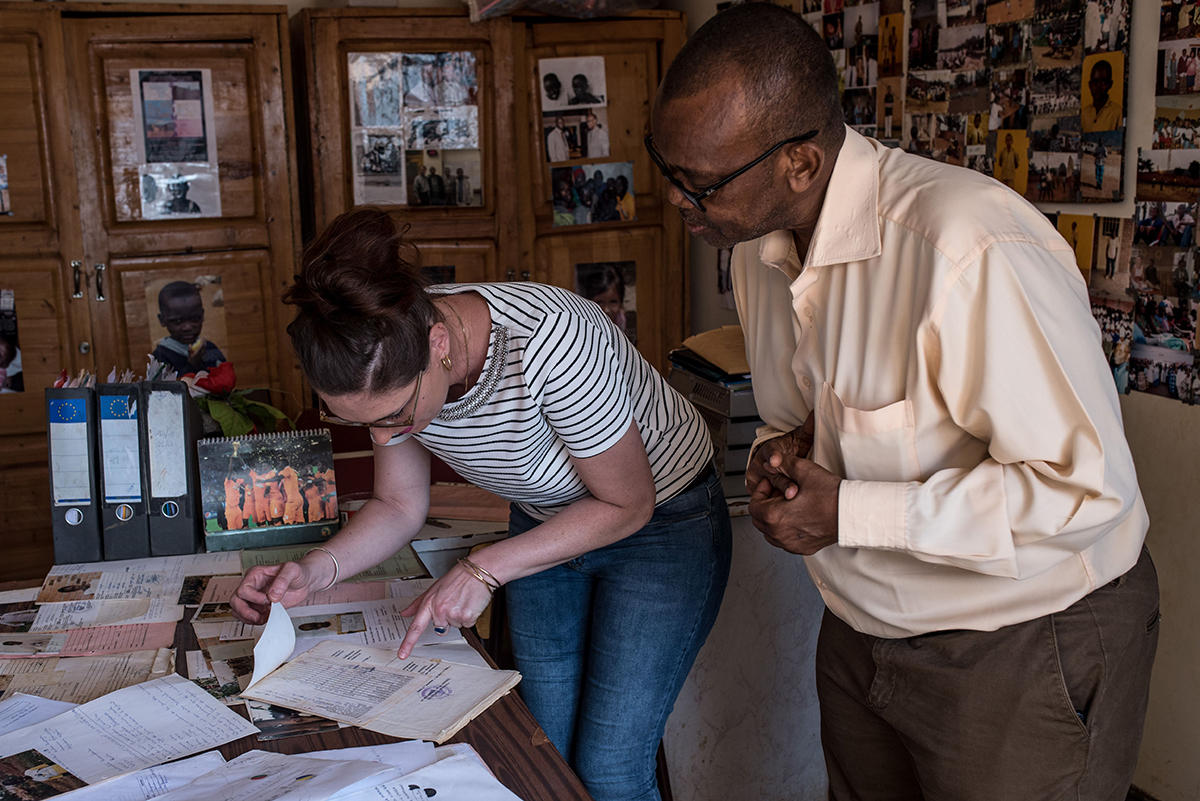 Hélène Dumas, pictured here with Damas Gisimba, director of the centre, goes through the archives of the orphanage in April 2019.
Pierre Galinier
Pierre Galinier
Share
Share

As you pointed out, the preservation of records related to the genocide remains an important issue…
H. D.: Indeed, history cannot be written if the records disappear. In cooperation with the Paris-based Shoah Memorial museum, which is a key partner in all of the research operations conducted in Rwanda, the CNRS has laid the groundwork for an agreement with the Rwandan National Commission for the Fight against Genocide (CNLG) and Ibuka, the main association for survivors, with the aim of initiating a cultural cooperation on the records, as well as exhibitions and educational programmes on the history of genocides in the 20th century. For example, in December 2019, the CNRS joined forces with the Shoah Memorial to organise a three-day course on 20th-century genocides in Kigali, the Rwandan capital. The session was intended for the CNLG and Ibuka management as well as for the guides at the Tutsi memorials. In addition, as soon as the Covid-19 pandemic begins to subside, we plan to use funding from the French National Research Agency (ANR) to set up an archive of the documents compiled by Ibuka.

Could you tell us more about the origin and nature of your research on the testimonies of a group of child victims?
H. D.: It all started as a coincidence in 2016, when I was helping to sort out documents in the CNLG library during my long-term mission in Rwanda. In a cabinet stuffed with a jumble of audiovisual records, I found a set of flimsy school notebooks containing accounts of life before, during and after the genocide, written in Kinyarwanda by 105 orphans who were victims of the massacres. After photographing them page by page, I began translating the stories into French, with the help of two Rwandan friends who were also genocide survivors. The children’s accounts stood out for their graphic description of the violence in the present tense. The realistic and transparent style of their writing gives the reader a nearly physical insight into what this horrifying experience must have represented for children who witnessed the near-total slaughter of their families.

"Sans Ciel Ni Terre," the book that you published last October, is based on the content of those accounts. What makes it so unique?
H. D.: Unlike other sources compiled by non-governmental organisations (NGOs) or the International Committee of the Red Cross (ICRC), which make it possible to track the experience of these young victims from the perspective of adults, these first-person accounts describe the violence and cruelty of the genocide through a child’s eyes, with their own subjectivity. In addition, they represent our first access to such a large and unified body of eyewitness testimonies. The texts came from a writing workshop organised in 2006 by the Association of Widows of the 1994 Genocide against the Tutsi (AVEGA). One notable aspect of the initiative was that it brought together children from the same region of eastern Rwanda. This geographical unity is of paramount interest, because the story of the event varies from one town to another, or one parish to another. In fact, although the massacre of the Tutsi people was planned on a national scale, with the backing of the administration and certain media, it was also extremely decentralised, which explains why it claimed so many lives.2 An analysis of the body of testimonies makes this very clear.

These accounts were compiled 12 years after the end of the genocide. Doesn’t this time lapse in some way modify the authors’ perception of the traumas they endured?
H. D.: When they started writing their accounts, in April 2006, these young people were mostly between 20 and 25 years of age, and still very much orphans of the genocide. They still described themselves as children and were considered as such by the association AVEGA. This period coincided with the first sessions of the Gacaca courts, people’s tribunals formed to try the hundreds of thousands of perpetrators, and was marked by a resurgence of violence in the Rwandan hills. In fact it was during that year, in connection with this highly exceptional legal context, that the largest number of killings of Tutsi survivors would occur. I was able to access a report on what the Rwandan government calls the ‘genocide ideology’, which mentioned the racist pamphlets distributed in 2007 by some secondary school pupils calling for the murder of their Tutsi classmates. When these survivors put pen to paper, in 2006, the situation was therefore still extremely volatile. 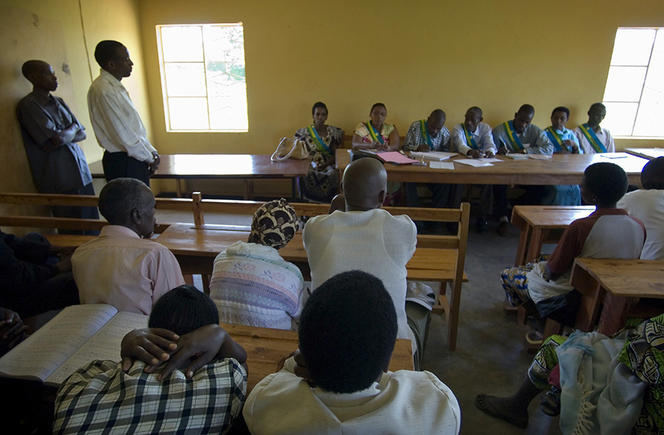 Gacaca court, people’s tribunal dedicated to trying the perpetrators, in a village near Kigali, in May 2007. 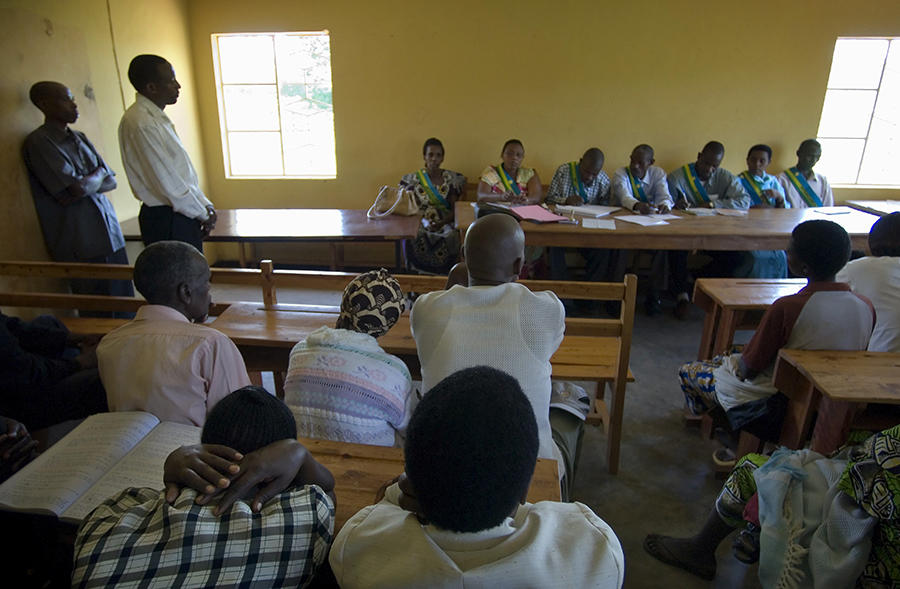 How are these accounts useful from a purely historical viewpoint?
H. D.: What struck me at first was how precise they were regarding the locations, the people involved, the family structures, and then the slaughter scenes recounted in minute detail. The meticulousness of their descriptions also came through in the way they traced the processes that led to the genocide, for example when the writers mention how they discovered their racial designation at school. These are all invaluable factual elements for the historian because they enable a concrete analysis of the discrimination systems that were bolstered when Juvénal Habyarimana came to power in 1973. Some researchers in the political sciences still maintain that the genocidal execution of the Tutsis was not motivated by a racist mindset, but these accounts refute that paradigm. In fact, it is untenable to think that relying solely on the killers’ version of the events is enough to shed light on how the perpetrators of the genocide – who have every reason to downplay racism as an ideological motivation – saw their acts, and justified them in their own eyes as well as in those of their victims. Although the massacre ended in July 1994, when Paul Kagame’s FPR (Rwandan Patriotic Front) took full control of the country, the testimonies about the post-genocide period show that this peace remained very fragile. During this time lapse, small militia groups continued to fight throughout the country, and Tutsi children were taken away as domestic slaves when the Hutu populations fled to Zaire. These events clearly feature in the orphans’ accounts .

You intend to return to Rwanda as soon as the pandemic-related travel restrictions are eased. What do you hope to accomplish on your next trip?
H. D.: The primary aim of this trip, which should last several months, will be to implement the archival projects initiated in December 2019 with the Shoah Memorial and our Rwandan partners. In parallel with collecting genocide records and putting them to good use, I hope to meet some of the authors of the notebooks for the first time, so I can give them copies of their writings, since the originals are now kept at the CNLG’s offices in Kigali. I would also very much like to know what the orphans’ lives have been like since the workshop, and what kind of perspective they have on their testimonies today. So far I only know that one of them is working with a survivors association at the local level. Eventually, I hope to be able to publish the entire content of the notebooks in a different form, since it is only partially included in Sans Ciel Ni Terre. And of course, that will mean returning to Rwanda to get permission from the CNLG, which now owns these documents, and, most importantly, from all of the writers themselves.