The experts’ conclusions leave no room for doubt: biodiversity is under threat on every continent and in every country.
ac production/Getty Images
Share
Share
The IPBES, which is to biodiversity what the IPCC is to climate change, recently published five reports at its sixth plenary session held in March in Medellín, Colombia. In this synthesis of current scientific knowledge about biodiversity, experts have drawn up an alarming overview of the state of living organisms and of land degradation, while proposing possible political solutions.

“Land degradation, biodiversity loss and climate change are three faces of the same central challenge: the increasingly dangerous impact of our lifestyle on the health of our natural environment and of ecosystems. We can no longer afford to tackle any one of these three threats in isolation,” said Sir Robert Watson, Chair of the Intergovernmental Science-Policy Platform on Biodiversity and Ecosystem Services (IPBES), speaking on the fringes of the sixth plenary session held on 17-24 March in Medellín, where he called for political and civic solutions, both at the global and local scale. For three years, around 550 scientists from more than100 countries1 undertook the lengthy task of drawing up a report based on several thousand scientific articles, government sources and indigenous and local knowledge. Their conclusions leave no room for doubt: biodiversity is under threat on every continent and in every country. By 2050, 38-46% of animal and plant species could be wiped out from the planet. Of particular concern are Central and South America, sub-Saharan Africa and Asia, which are more vulnerable to soil impoverishment. Within 30 years, the number of people living in arid regions could rise from 2.7 to 4 billion, increasing the risk of migration crises. Land degradation and climate change, leading to declining crop yields and social and economic instability, are likely to force 50-700 million people to migrate by the middle of the century.

“One of our main goals is to show that social, economic and cultural development issues are extremely dependent on the quality of the environment in general and that of biodiversity in particular, whether for food, energy production, economic development or transport of goods,” explains Joachim Claudet, a researcher at the Centre for Island Research and Environmental Observatory (CRIOBE)2, who contributed to two regional reports (Europe and Central Asia, Asia and Pacific). 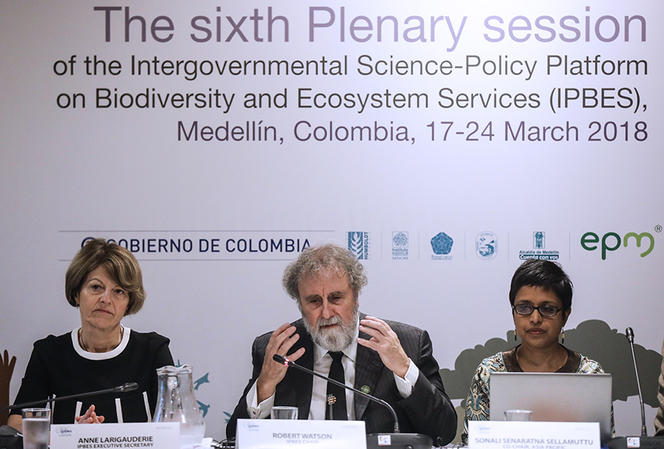 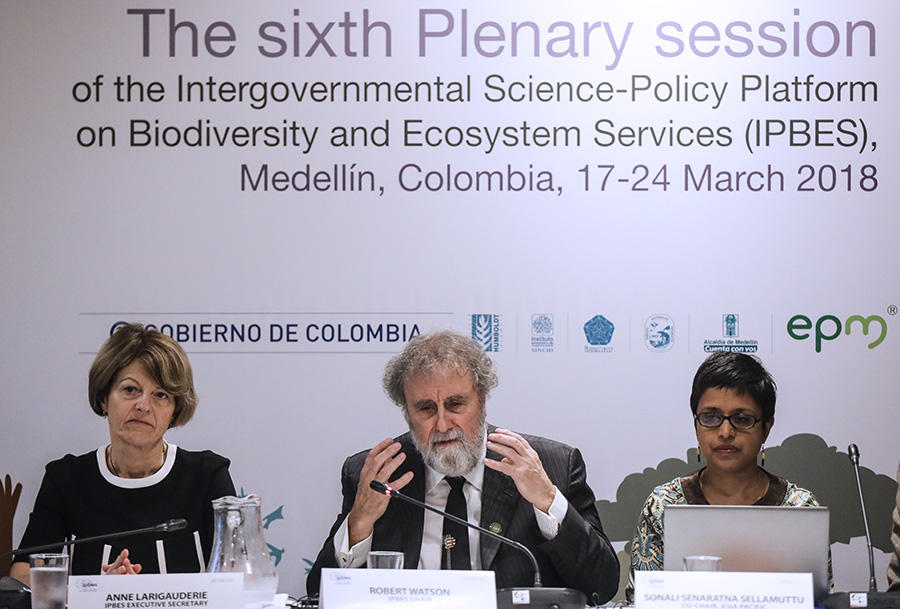 Set up in 2012 under the auspices of the United Nations, the IPBES is an intergovernmental organization whose mission is to analyze, summarize and report all available scientific data, with the aim of providing a comprehensive evaluation of biodiversity, its status, its future, and what needs to be done to preserve it. Of the five reports, four assess biodiversity and ecosystem services for the first time, in four geographical regions: Africa, the Americas, Asia and the Pacific, and Europe and Central Asia. The latter has lost nearly 42% of its terrestrial animals and plants in the last decade. In the Asia-Pacific, experts believe that 90% of corals will experience severe degradation by 2050, even in the event of optimistic climate change scenarios, while Africa could see half of its bird and mammal populations become extinct by the end of the century. As for the Americas, the report forecasts a loss of as much as 40% of the region's original biodiversity by 2050, under “business as usual” climate change conditions. And this is merely a sample of the facts and figures provided in the report…

“Regional estimates of this kind are necessary and eagerly awaited. In particular, they make it possible to assess the state of regional biodiversity for each type of major ecosystem, whether terrestrial or aquatic and marine, at high altitudes or in underground caves. They also help to identify gaps in our thematic and geographical knowledge of large regions,” explains Jean-François Silvain of the EGCE,3 president of the Biodiversity Research Foundation (FRB). The 6th plenary session was the culmination of this synthesis work. The objective is to highlight priorities for preserving biodiversity and safeguarding ecosystem services, and to identify a range of possible levers for action by public and private decision-makers. “These reports form a common core of knowledge and results agreed by all the parties, line by line,” says Hélène Soubelet, director of the FRB. “Any steps backward or any actions that contradict these key messages will therefore become hard to justify.” 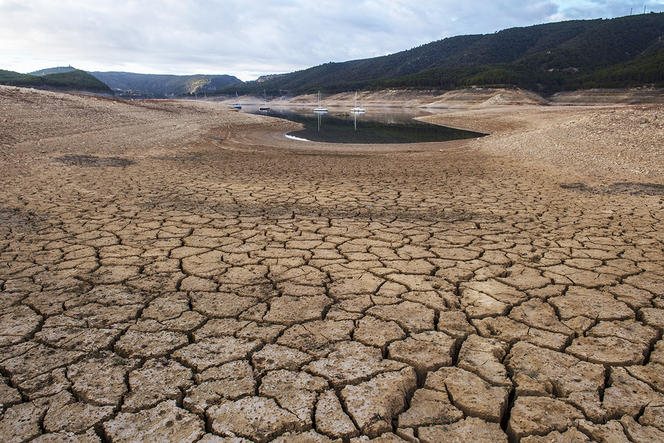 Spain and Portugal have recently been grappling with a historic drought, resulting in deadly fires and crop devastation. Seen here, the Entrepeñas reservoir near Sacedón, central Spain, on November 24, 2017. 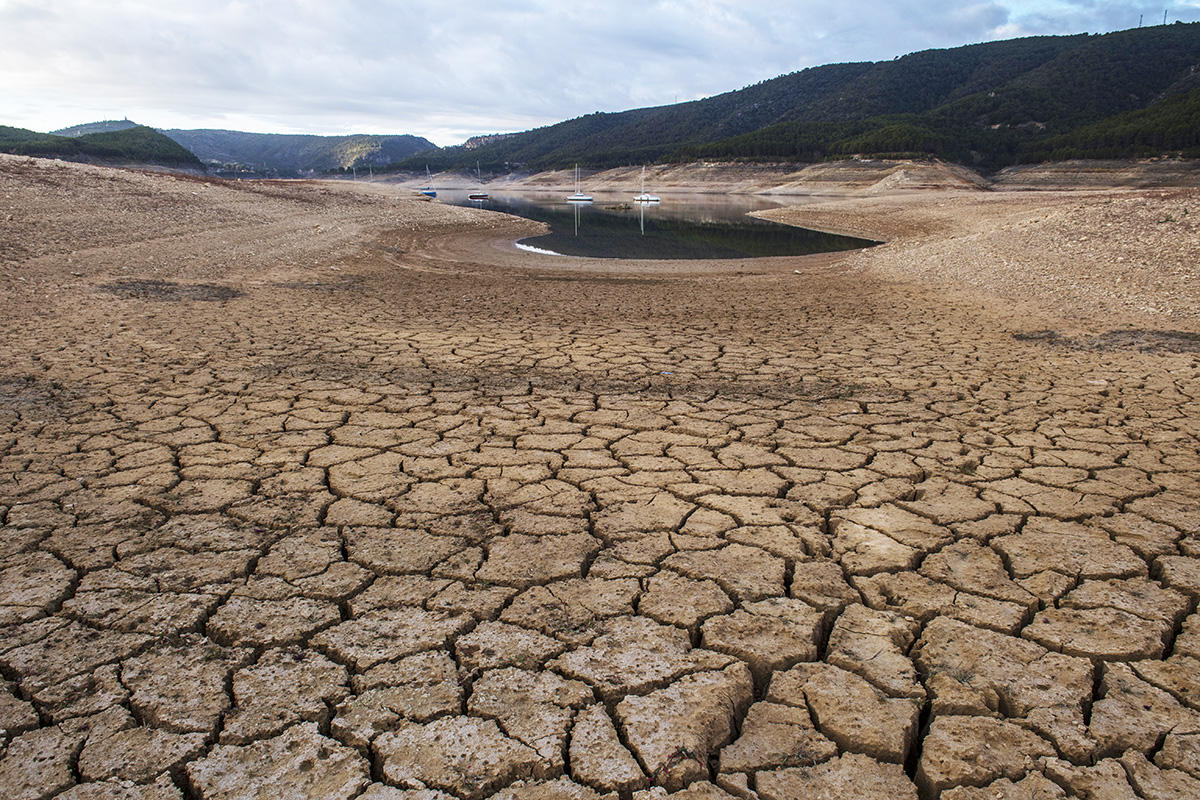 Two years after their previous report on pollination, pollinators and food security, in which France successfully fought for the inclusion of the issue of neonicotinoids (neurotoxins that act directly on the central nervous system of insects),4 the IPBES has now tackled the question of land degradation and restoration, and its impact on the well-being and stability of people. “This is the first time that a major international report focuses on the land as such, rather than take another perspective such as food security or climate change mitigation. Human activity exerts huge pressure on the land, causing pollution, erosion, compaction, acidification, desertification and so on. At the global level, it is estimated that around a third of Earth’s land surface—not only soils but also forests, grasslands and wetlands—is moderately to severely degraded, with some land now unfit for agriculture," Soubelet points out. Yet soils are home to 25% of the world's biodiversity, which is microscopic, concealed, poorly understood and above all under threat. According to estimates by the IPBES, nearly half the planet’s wetlands have disappeared since the beginning of the 20th century. Today, less than a quarter of the Earth’s land surface has escaped substantial impacts of human activity. This is likely to fall to a mere 10% by 2050, some of it unusable, such as deserts, mountainous areas and polar regions. 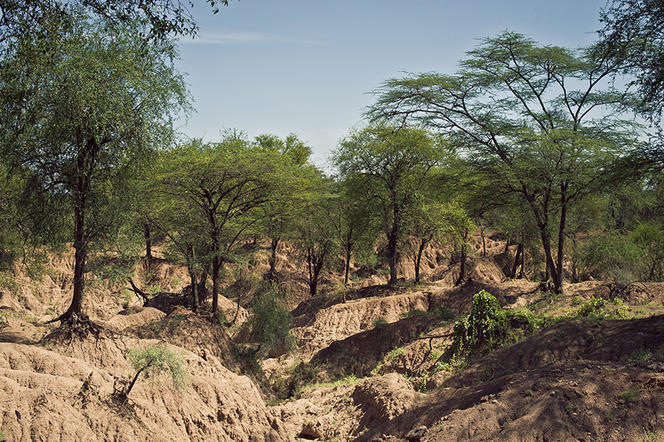 IPBES experts estimate that 500,000 square kilometers of land in Africa have already been degraded by overexploitation of natural resources, erosion, salinization, deforestation and pollution, causing huge pressure on biodiversity and on ecosystems. The image shows land degradation in a forest in Kenya in September 2011. 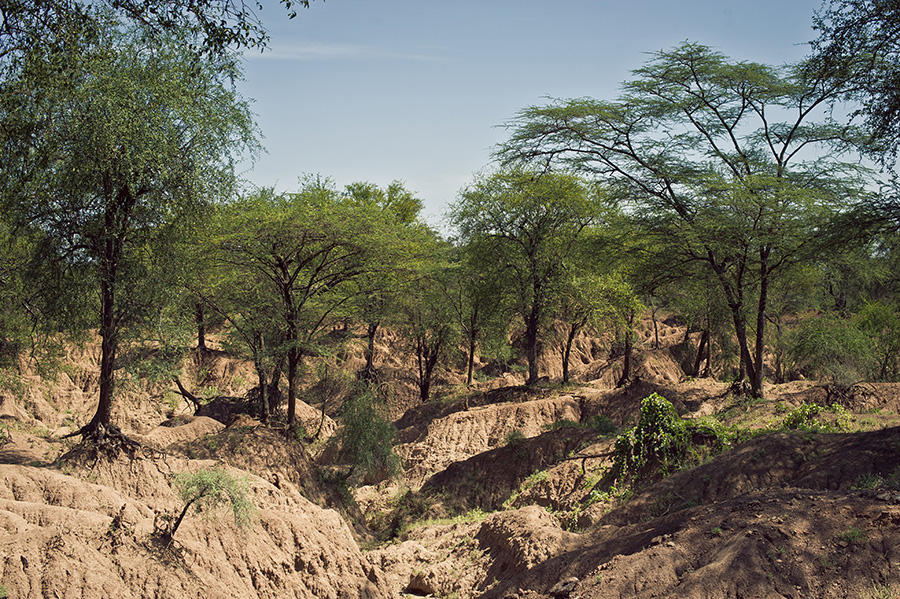 IPBES experts estimate that 500,000 square kilometers of land in Africa have already been degraded by overexploitation of natural resources, erosion, salinization, deforestation and pollution, causing huge pressure on biodiversity and on ecosystems. The image shows land degradation in a forest in Kenya in September 2011.
Micah ALBERT/REDUX-REA
Micah ALBERT/REDUX-REA
Share
Share

“One of the main objectives of the report was to show the land not only as the basis of all human activity, but also as a natural constituent and component of nature, in the same way as water, which provides food resources, helps to regulate climate change and so on. In this respect, the idea is also to stress the role of land for humankind in the light of current values and perceptions," explains Alexandra Langlais, a lawyer at the Western Institute of Law and Europe (IODE),5 who contributed to one of the chapters on the legal aspects of decision support, aimed at policy-makers. “All studies agree that there is growing political awareness of these issues, as evidenced by the fact that the combat against land degradation and the importance of restoration were included in the Aichi Biodiversity Targets as well as in the UN Sustainable Development Goals. However, it is now time to reconcile the short and long term, and in particular to use the law to involve stakeholders at all levels, especially the indigenous peoples and local communities who are directly impacted by biodiversity loss, farming and land degradation,” she adds. The damage is not only environmental and social, but brings with it an economic threat: experts estimate the economic cost of the current loss of biodiversity and ecosystem services due to land degradation at 10% of global GDP.

Another objective of the reports is to highlight issues that largely transcend national borders. The main strength of the thematic report is that it identifies links between land degradation, climate change and migration, conflict and flows of refugees. About one and a half billion people around the world are currently thought to be living on severely degraded land. “The International Organization for Migration (IOM) estimates that 13% of them may migrate because of poor harvests," Soubelet says. “And an additional 13% could, for instance, move because of natural disasters, since damaged soil is less able to absorb rainwater, leading to runoff and flooding. More generally, only 10% of land was being reclaimed in 2011, with no significant change since then, according to the FAO. It is therefore urgent to raise awareness of this situation and undertake protection and restoration initiatives.”

However, the reports are intended to be practical. “We aim to show what works, what doesn’t work and what could work. Rather than being prescriptive, we used all the available data to summarize possible scenarios for 2030 and 2050,” Claudet explains. 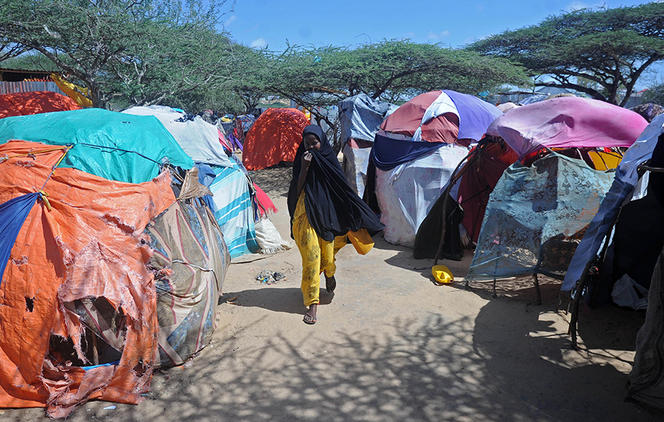 According to the IPBES, by 2050 from 50 to 700 million climate refugees could flee regions that have become arid and unfit for agriculture. Seen here, a young Somali woman in a camp for internally displaced persons near Mogadishu, May 24, 2017. 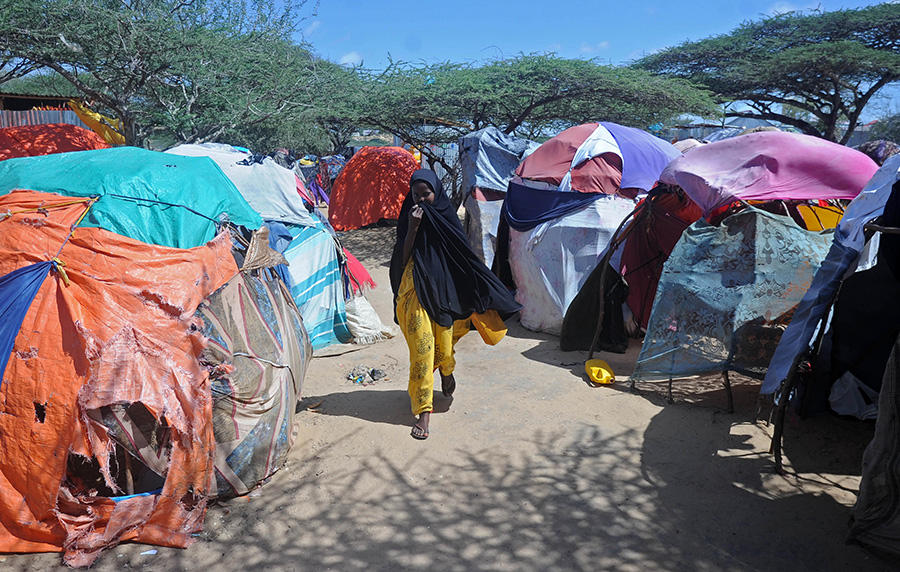 Ranging from local actions to global policies, a number of tried and trusted solutions are suggested, including limiting meat consumption, reducing waste, discontinuing agricultural practices such as intensive farming, monoculture and ploughing, renewing techniques by encouraging agroforestry, underseeding and respecting fallow land. Ultimately, the benefits of land preservation and restoration would be ten times higher than the costs, and could help to keep global warming under the 2 °C threshold set by the Paris Agreement (COP21). “Biodiversity should henceforth be included in all decision-making, in every sector of the economy and in all public policies,” Silvain says.

In 2019, the IPBES will release one of the most comprehensive assessments on biodiversity and ecosystem services published since 2005. This 7th session will be hosted by France, from April 29 to May 4, 2019, at Unesco. Coming two years after the Paris Agreement, this will take the form of a global evaluation to review the Aichi biodiversity targets (COP10) and the 17 sustainable development objectives drawn up in 2015 by UN Member States. While the countries of the world have so far failed to come together to halt biodiversity loss, the IPBES provides a way forward: that of seeing nature not as a resource at the service of humankind, but rather as a common good.