The Ocean Solutions Initiatives
Share
Share
With its sizeable capacity to absorb atmospheric CO​2 from greenhouse emissions, the ocean is a key weapon in our fight against global warming, employed in a growing number of climate-regulation and ecosystem-protection solutions. But not all these ocean-based measures are of equal merit, warns a recent study conducted by the Ocean Solutions Initiative. Explanations from its coordinator Jean-Pierre Gattuso.

What price does the ocean pay for its vital role in fighting climate change?
Jean-Pierre Gattuso:1 A steep price indeed. Firstly, higher temperatures, for 93 % of excess heat generated by human-induced greenhouse-gas emissions is absorbed by the ocean. Secondly, acidification. Bear in mind that roughly 25 % of CO2 emissions produced by human activity is absorbed by the ocean. On the one hand, this is good news because it means less carbon gas remains in the atmosphere, which limits climate warming. But on the flip side, when carbon dissolves in the ocean it increases the water’s acidity with consequences on plants and animals. Thirdly, rising sea levels. Two phenomena come into play here: warmer water takes up more volume than cool water, hence pushing up water levels; next, warming obviously causes ice caps and glaciers to melt and join the body of water. And then there’s a fourth impact, not explicitly taken into account in our study: the loss of oxygen in warmer waters, which can harm or kill off sea fauna.

What triggered the creation of the Ocean Solutions Initiative?2
J.-P. G.: It follows on from an earlier project—Oceans 2015 Initiative—launched prior to the COP21 (UN Climate Change Conference) in Paris with the aim of alerting decision-makers on climate change’s impact on the ocean. But after the signing of the Paris Agreement—a big step in itself after 20 years of negotiations—it became clear that its terms were extremely ambitious and would be very difficult to implement. When we tally up the contributions to CO​2 reduction pledged by the Agreement’s 185 signatory States, we’re still very far off the target of limiting global temperatures to +1.5-2°C compared to pre-industrial levels; we’re closer to +3-3.5°C. This observation made us think that the ocean, rather than merely being a victim of global warming, could also be a supplier of solutions. So the desire to explore this possibility was one reason why the Ocean Solutions Initiative was set up.
The other reason is that a number of geo-engineering systems have emerged on paper—like solar radiation management techniques that would limit sunlight from warming the Earth’s surface by reflecting it back into space. We’re talking about two approaches here: cloud brightening which boosts the capacity of clouds, sprayed with seawater or other substances, to reflect sunlight, or albedo enhancement which prevents the ocean from warming by covering its surface with foam. There is a crucial need to validate these systems before they’re implemented. We need to know more about their pros and cons.

So with these objectives in mind, the Ocean Solutions Initiative’s international panel of experts (representing Canada, Denmark, France, Germany, The Netherlands, New Caledonia, Saudi Arabia, United Kingdom and USA) undertook the first-ever detailed study of 13 ocean-based solutions for countering climate change and reducing its impact on marine ecosystems.3 How did you evaluate these solutions, ranging from the classic development of renewable energies to emerging ones like alkalinization whereby antacids are added to the ocean to neutralize acidification?
J.-P. G.: The 13 solutions—whether existing or potential ones—fall into 4 different types of action. The first type is to tackle the cause of climate change—greenhouse gas emissions—namely by replacing fossil fuels with renewable energy or else by building up vegetation to absorb CO​2. The second is to protect marine organisms and ecosystems from climate change, for example by reducing pollution. The third consists of the solar radiation management techniques already mentioned. The fourth is to repair damage, for example through the restoration of degraded habitats or the genetic modification of marine organisms to boost their adaptability to altered conditions. So once we identified the 13 solutions, we examined each of them according to 8 parameters covering environmental, technological, social and economic criteria (i.e., its effectiveness in countering climate change and its effects; technological readiness; the time needed for it to reach full effectiveness; the duration of benefits; cobenefits; disbenefits; cost effectiveness; governability). To do so, we scanned scientific literature comprising over 1000 articles, then rated the 8 parameters for each solution on a scale of 1 to 5. 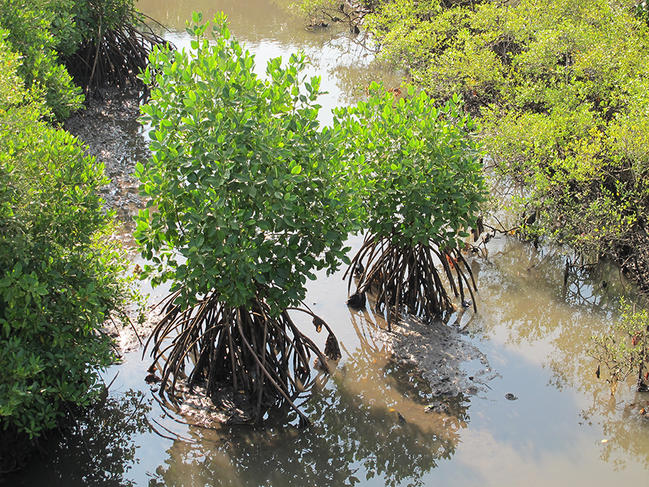 Mangroves have a great capacity for storing CO2. 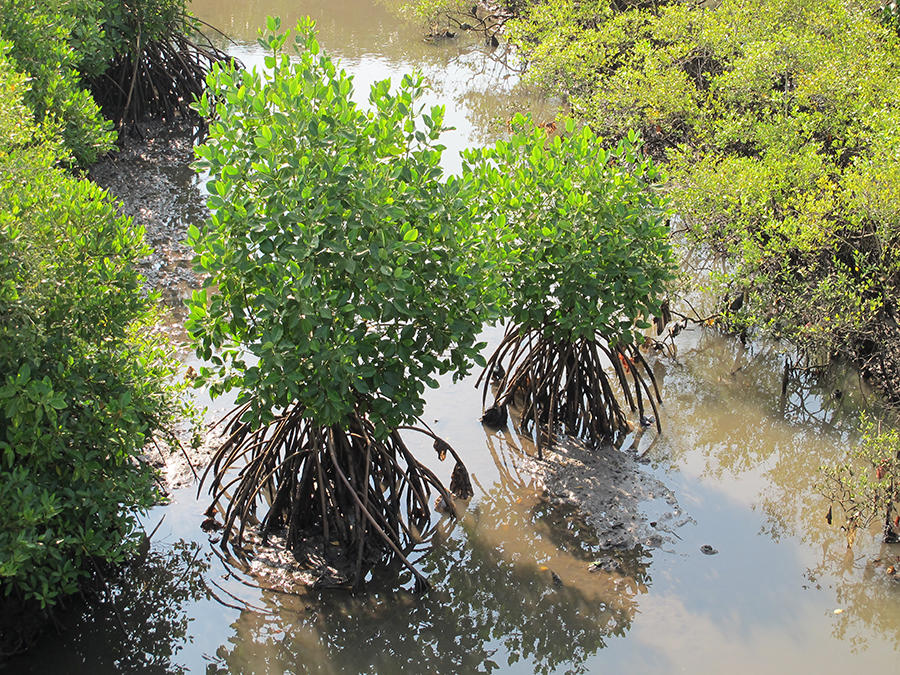 Your study distinguishes between no-regret measures and others fraught with too many uncertainties…
J.-P. G.: That’s right. Some techniques carry too many unknowns—and therefore risks—to be recommended for immediate deployment. As far as solar radiation management goes, no experiments have been conducted on these techniques, namely their toxicity. Another unresolved question is whether they might hamper the photosynthesis of ocean vegetation, and hence reduce the productivity of plants that could otherwise absorb CO​2.
At the other extreme are the no-regret measures. Some of these have enormous potential for limiting climate change and should be implemented without hesitation. This is the case of renewable energies like wind and tidal turbines—remarkably powerful energy sources. Others may not have huge potential for countering climate change but they come with numerous cobenefits. For example, conservation of a mangrove will also help to maintain food sources for the local population and to protect the coast from erosion as the mangrove acts as a barrier against large waves—cobenefits that make the solution worthwhile.

How important is it to combine different types of measures?
J.-P. G.: In fact the most effective approach is to combine global with local solutions, in other words large-scale ones with small-scale ones. Local solutions may have moderate effects but to their credit, they can be put into action right away and as already mentioned, they can bring various cobenefits to a given area. But because local measures won’t make much of a wider impact on climate change, we also have to implement global solutions with greater potential in this respect.

What improvements would you like to see in policy responses to climate change?
J.-P. G.: It might sound a bit trite, but it’d be good to see politicians implement what they’ve promised to implement! Three years down the track from the Paris Agreement in 2015, when we look at the text, we can see that we’ve done far less than what is required to reach its objectives. Of course, there’s this ongoing tension between environmental and climatic protection on the one hand, and employment, the economy, growth on the other… So we’re also releasing, on October 4, a policy brief addressed to decision-makers in the hope that the message will get across to negotiators at the COP 24 in Katowice, Poland—but not exclusively. This is a message that we’re also trying to communicate to the wider public, including children, through a video tool we’ve created. Do we want to protect our planet and its climate, our health and that of our children? Or do we want to continue on the same path of destruction? 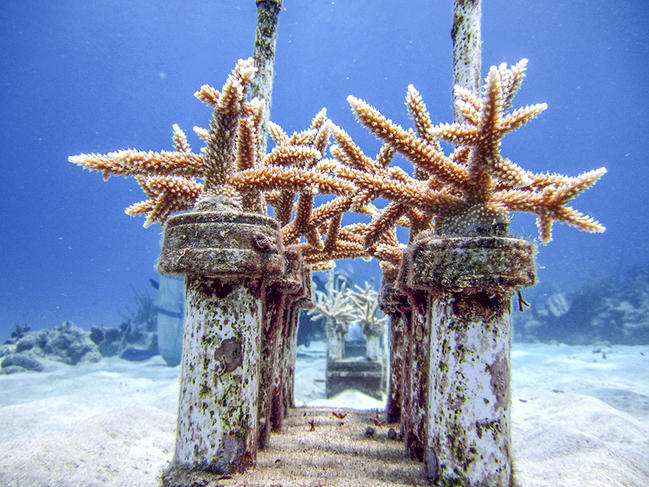 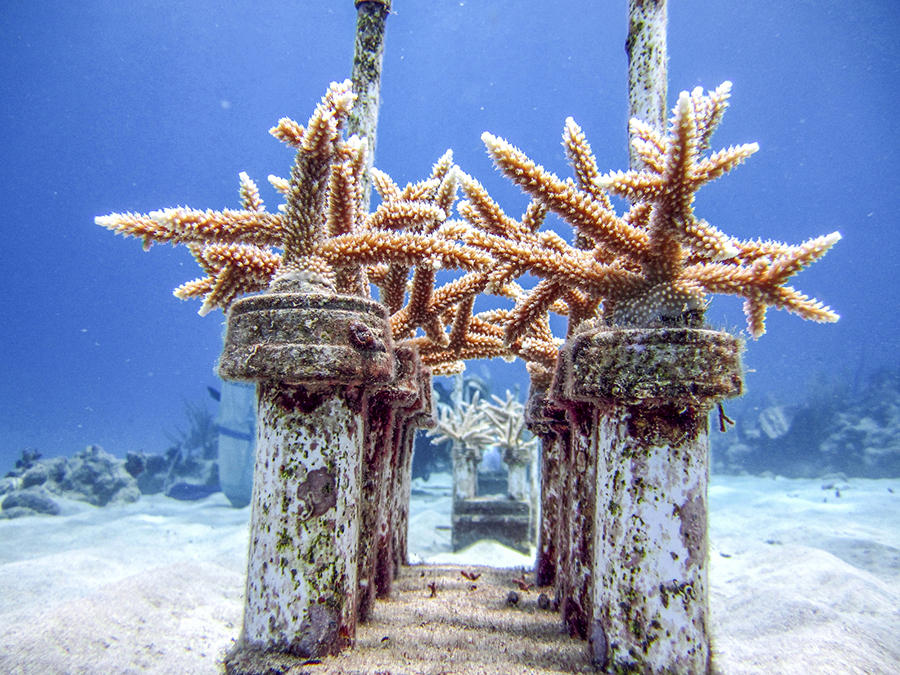 And what scientific priorities does the climate-change issue call for?
J.-P. G.: The elimination of uncertainties! For all techniques that exist on paper only at this stage, we need a better grasp of their costs, their effectiveness, the risks they entail. This is essential.

What’s the next step for the Ocean Solutions Initiative?
J.-P. G.: We’re organizing a new workshop with around a dozen researchers to examine solutions for coral reefs specifically. Coral reefs are the most at-risk of marine ecosystems, vulnerable to both global warming and acidification. They’re also subject to mass mortality episodes, with 40% of corals on the Great Barrier Reef perishing in 2016 and 2017. We know that in order to reduce coral mortality we need to limit the climb of ocean temperatures, and thus, carbon emissions, but some countries, like Australia, are not moving in this direction. The present Australian government seems to show a preference for local solutions such as pollution reduction, or some more farfetched ones like refreshing corals with cool water pumped from the deep ocean, or else shading them with umbrellas… Perhaps I’m getting ahead of myself but I expect our workshop to reach the conclusion that that there’s no way we can hope to save the Great Barrier Reef with local measures. We need to implement global ones.

Article
Global warming in France may be worse than thought
Environment