François Yvon
The recent advances in the field of artificial intelligence have been impressive, as illustrated by the AlphaGo program's victory over world Go Champion Lee Se-dol. Yet there are still areas where algorithms do not surpass humans, such as translation. François Yvon, a specialist on the topic, explains why.

The recent defeat of the world champion Go player by the AlphaGo program has reignited speculation about artificial intelligence, and about the limits and dangers surrounding its development. However, many human skills still appear beyond the capacities of mere algorithms. Among these is translation; efforts since the 1950s to automate this activity continue to be thwarted by seemingly insurmountable obstacles. Could the AlphaGo approach offer new hope in this field, frequently cited as one of the most challenging for artificial intelligence?

The AlphaGo recipe for success is relatively well-known, and rests on a long tradition of research on game playing machines. The program plays the game by making a sequence of local decisions and if it is to play well, two skills must be developed:

–the ability to select the best move from among those permitted, according to the current state of the game, based upon an evaluation of its long-term reward. This involves taking account of all possible responses by the other player, then of all responses to these responses, and so on. A complete exploration of this decision tree is simply unfeasible, and heuristic search strategies must be deployed. Crucially, these strategies are learnt by AlphaGo;
–the ability to identify a position as winning or losing, which is again a skill that is learnt from data.

AlphaGo performs these two learning tasks using “deep” networks of artificial neurons by analyzing both real games (played by expert human players) as well as a huge number of artificial games generated by playing two different versions of the software against one another.

But how does this relate to machine translation (MT)? As with Go, the most effective approaches to date are based primarily on machine learning. Translation is thus modeled as a series of basic actions involving the addition to the translated text of one word at each iteration of the system. A good MT program must thus be able to identify the best word amongst all the possibilities contained in its dictionary, taking account of words previously used, and, of course, of the actual sentence to be translated. The use of statistical techniques similar to those utilized by AlphaGo in learning how to make these choices has led to considerable improvements in MT. So what are the limiting factors?

The automatic evaluation of the final quality of a complete translation is still an enormous challenge.

First, determining the best move to play requires an automatic evaluation of the potential benefits of each individual action: in Go, such assessment is straightforward and is derived from the ultimate outcome of the game (victory or defeat). However, things are different in translation: automatic evaluation of the final quality of a complete translation continues to pose an enormous challenge. 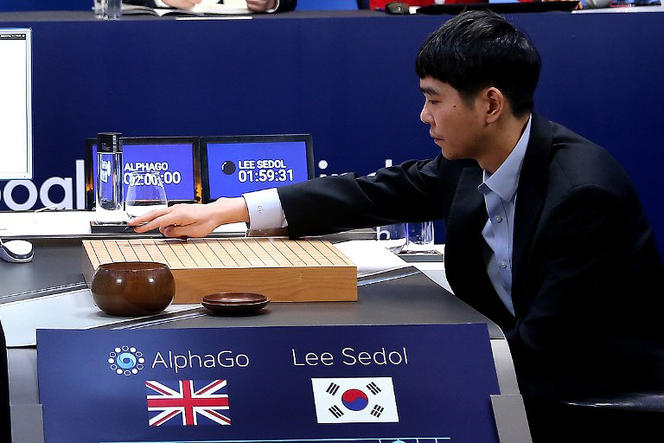 The South Korean Go grandmaster Lee Se-Dol makes a move during the third game of the Google DeepMind Challenge Match against Google-developed supercomputer AlphaGo on March 12, 2016. 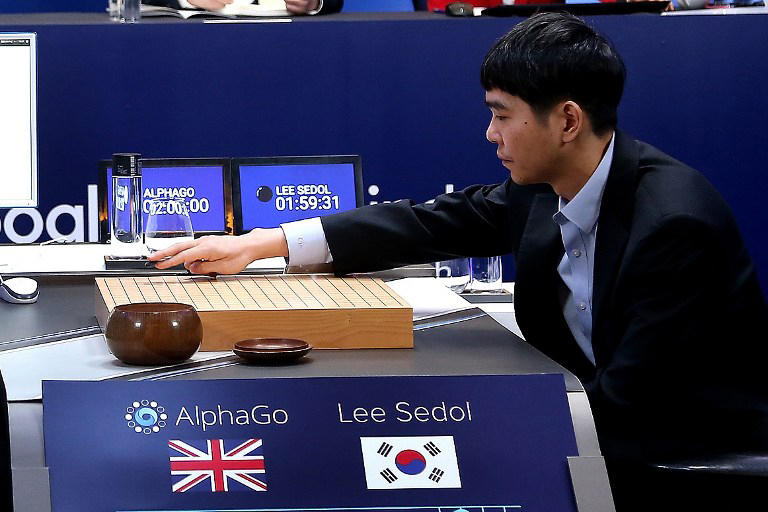 Next, to pursue this analogy, making a move may be equated with producing a single word, but what is the equivalent to a complete game? Current systems translate individual sentences within a given text independently of one another, with each evaluation being restricted to only a small number of possible words: the repetition of patterns from one sentence to the next allows the system to learn useful generalizations. However, this approach is blind to interdependency between consecutive sentence and it is inherently unable of ensuring the consistency of the resulting documents regarding style, discourse, semantics or references.

How to model human knowledge?

This leads to a further observation: since learning requires examples, it will require access to a vast body of translations—produced, where possible, by qualified translators. The problem is that the activity of human translation only concerns highly specific texts: while translations of novels, legal texts, technical documents, websites and other communication media are readily available, there are far fewer translations of tweets or discussions in forums, let alone translations of spontaneous speech utterances. It should also be noted that even the most abundant types of texts do not exist in the same volumes for all language pairs: oceans of data may exist for one pair (such as English/French) but only tiny droplets for another (Malagasy/ Inuktitut).

Translation requires knowledge of languages, but also of the cultures and societies that relate to them.

An approach involving the generation of artificial data, for instance by translating via a so-called pivot language (generally English), is of little value here, since there is no guarantee of the reliability of such pseudo-translations. In contrast with Go, where the rules, once programmed, enable the spontaneous production of legal moves and formally correct games, language turns out to be a far more complex subject to model. The generation of syntactically correct artificial texts is an extremely hit-and-miss affair, and automatic translation of such texts is fraught with even greater difficulties.

The final problem, and no doubt the thorniest, is that translation is not a natural process. It calls for well-trained professionals highly accomplished in this arena, who have acquired a variety of skills not just in the source and target languages, but also with regard to the cultures and societies relating to the languages in question. These skills must be deployed simultaneously, for example in order to maintain appropriate linguistic markers of politeness, correct use of which requires sophisticated analysis of the status of the various actors involved and of the interrelations between them. Such inferences generally remain implicit in the texts themselves and in sample translations, and even the most dogged statistical analysis can learn no more than crude approximations to these politeness rules, with the attendant risk of occasionally catastrophic results.

A translation boom for the general public

Automatic translation is getting better every year and will continue to improve, thanks to the development of new algorithms capable of more effectively integrating available knowledge, linguistic resources and masses of data. It is already successfully producing results which are adequate for use in a number of applications, and is even achieving remarkable quality levels for the most rigidly formulaic documents such as technical guidelines. Human correction of automatic translations is now becoming an industry in itself, and, in certain contexts, enables low-cost production of acceptable, verified translations that facilitate international exchange and commerce.

MT also enjoys great success with the general public, who use it to fathom the gist of texts written in languages unfamiliar to them, and also, in a more roundabout way, to write texts in a foreign language, occasionally also for learning purposes. However, it is unlikely that machines will one day surpass humans in this particular field, save perhaps for the most trivial translation tasks.

0
Rosetta: the End of an OdysseyPrevious
A Paris Journey through TimeNext 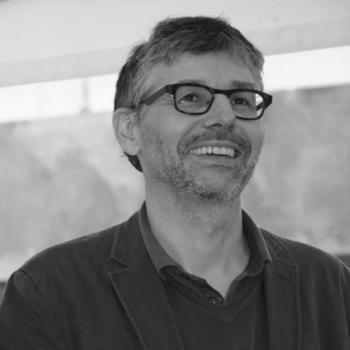