Lorenzo PALLONI
Share
Share
ERCcOMICS, a European communications project initiated to promote science to the general public, was featured at the 46th Angoulême International Comics Festival. Many comics were printed for the occasion, including Estrella, a space-time exploration of the matter that makes up our cosmos. We met its co-creators, the artist Lorenzo Palloni and a team of astrophysicists and physicists including Christine Joblin.

How did your collaboration come about?
Christine Joblin:1 The European Research Council (ERC) wanted to make complex research subjects more accessible through inventive visual narration. The organization finances projects of scientific excellence that are considered ambitious, exploratory and original, in an effort to go beyond the frontiers of knowledge. Eighteen of these projects were adapted as online comic books. Estrella was inspired by our ERC Synergy project entitled Nanocosmos, whose objective is to achieve a new view of cosmic dust, from its origin in the envelopes of stars nearing the end of their lives, to its journey through interstellar space and regions of star and planet formation. The project combines observations from large telescopes with laboratory experiments using complex machines specifically developed for the project, such as the Stardust machine in which Estrella conducts her travels. The project is based in Madrid and Toulouse, and involves 3 coordinators as well as contributions from approximately 60 researchers, engineers and students.
Lorenzo Palloni:2 The umbrella project, named ERCcOMICS, is overseen by Sorbonne Université and the Bande Destinée communication agency, which invited me to be a part of the adventure. A number of topics were proposed, and being a fan of science fiction I was immediately drawn by the research of Christine and her two Spanish colleagues, Jose Cernicharo and José Angel Martín-Gago from the CSIC in Madrid.3 Space and the death of stars, I couldn’t dream of something better! The other comics form a diverse group, which is what’s so interesting about ERCcOMICS. They explore the quest for invisibility, human-robot relations, and even the roots of Ayurveda yoga.4

Promoting science and its discoveries using drawings is popular. What is the strength of comics in comparison to books or television when it comes to explaining science?
L. P.: For me comics are the perfect medium for communicating about science. They actually generate a dual reading, in which the reader is firstly interested in the story, but can also dig deeper into the science.
C. J.: Comics can speak directly to the reader’s imagination. Researchers have to move away from the technical and mathematical aspects of their work, in an effort to popularize their research and convey the passion that drives them and attracts new audiences toward science.

Estrella was inspired by a ERC Synergy project entitled Nanocosmos, whose objective is to achieve a new view of cosmic dust, from its origin in the envelopes of stars nearing the end of their lives.

Estrella was inspired by a ERC Synergy project entitled Nanocosmos, whose objective is to achieve a new view of cosmic dust, from its origin in the envelopes of stars nearing the end of their lives.
Lorenzo PALLONI
Lorenzo PALLONI
Share
Share

Estrella, the comic that grew out of your collaboration, is a kind of rereading of the film Fantastic Voyage, except that here the miniaturized researchers don’t explore the inside of the human body, but rather the environment of a dying star reproduced in the laboratory. Lorenzo, you didn’t study science. Were your exchanges with the researchers simple?
L. P.: I had to read a couple of basic introductory science books to get up to speed! Otherwise everything went really well. Nanocosmos, the research project Christine works on, is spread across a number of sites, including one in Toulouse and another in Spain. I visited the one in Madrid, and communicated via Skype with the entire team. I then wrote four story pitches that I proposed to the people at ERCcOMICS, who chose the one that best balanced science and narration.

Was the graphic potential also important? Because Estrella was meant to be published online.
L. P.: Yes, since the language of online comics is different than those on paper. Estrella reads from left to right, with the reader pressing a control button to move the story forward. Since the Stardust machine in the Madrid laboratory is also a kind of long tube, and part of the story takes place outside, I was able to create effects that stimulate the reader’s imagination. The story is more visual and powerful than in a traditional comic.

The so-called "Stardust" machine in which Estrella conducts her travels.

The comic book takes its name from the young girl who visits the nanoworld accompanied by her researcher father. She is moved by the journey, and decides to dedicate her life to science. In a plot twist she travels back in time to help her own parents, who are themselves simulating the chemistry during stellar decline. What does such a young heroine find interesting about the ashes of stars?
L. P.: I always put something of myself in my characters, in order to make them seem real. In Estrella I put my fascination for the origins of life…
C. J.: Nanocosmos surely takes part in the great quest for origins, namely understanding where the elements that we are made of came from—and how we are all made of stardust. This dust is the building block in the formation of stars and planets, and also brings the primary elements involved in the appearance of life.

We imagine that it’s a herculean task to reproduce the death of a star in the laboratory. Yet you use instruments that would fit in a living room…
C. J.: A fairly large living room. It’s of course impossible to simulate the death of a star in the laboratory. Our goal is to understand the chemistry that is involved at the end of a star’s life (for a category of stars known as red giants), and that leads to the formation of cosmic dust. Our Stardust machine recreates an environment in which the physical (pressure, temperature) and chemical (composition of the gas) conditions match the information provided by astronomical observations.

In the comic you emphasize that fundamental research leads to technological breakthroughs and applications.
C. J.: Major technological advances have been fostered by fundamental knowledge. Exploring the specific conditions in the formation of cosmic dust could potentially lead us to discoveries in the field of nanomaterials. What’s more, I’m interested in large carbon molecules such as polycyclic aromatic hydrocarbons (PAH). These are an important component of cosmic dust as well as a major pollutant on Earth, as they are generated by all processes of combustion. Understanding their properties and formation can provide elements in the struggle against pollution. 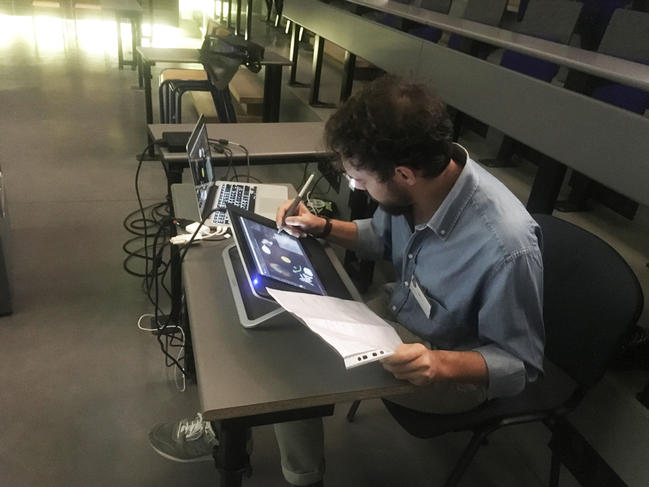 Lorenzo Palloni at France's yearly Science Day 2017 on the Jussieu Campus in Paris. 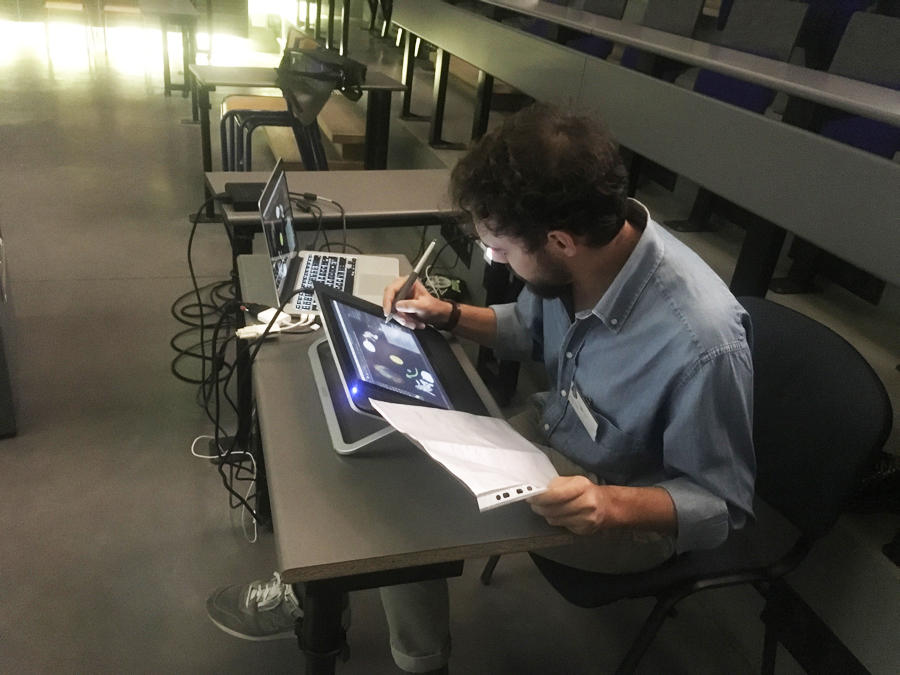 Your project, Nanocosmos, benefited from ERC financing. Was it difficult to obtain?
C. J.: The financial assistance amounted to 15 million euros, spread out across 6 years, and divided between various sub-groups involved in the project. The ERC call for proposals was highly competitive, which can discourage certain researchers, although the French community is becoming more and more involved. Such a sum considerably increases capacities for independence, creativity, and risk-taking. The gray area is nevertheless the limited duration of the project, which leads to uncertain prospects. We had to find the right theme in drafting the project. Nanocosmos has three leaders, including two in Madrid; structuring the project required reconciling three different visions. This called for time for reflection, and a certain amount of back and forth. Our project was selected during the 2nd submission. Then there were a series of evaluation stages involving a considerable number of scientists (report writers and expert committees). The final stage of the evaluation consisted of an interview in Brussels in front of an interdisciplinary evaluation committee.

Adapting a research subject in astrophysics to comic book “speak” was not an obvious task. Do you think that all scientific fields lend themselves to comics?
C. J.: In our case, the project’s astrophysics side actually helped create a story based on science fiction plots that are familiar to the general public. The cosmic dust aspect was a bit complicated, but the journey in the Stardust machine made it easier to grasp by giving access to the infinitely small (on the nanometric scale).
L. P.: There are no forbidden scientific domains in my opinion. Comics were the first form of expression used by humans, in the form of cave paintings. It’s an extremely powerful medium. Still, the goal of comics is not to inform about scientific content in a detailed and precise manner. It’s first and foremost about sharing the adventure of research!

With a PhD in physics, Xavier Müller is a science journalist. Since 2008, he has also published several novels.

Article
Why the World will be Marching for Science
Astrophysics