The astrophysicist Françoise Combes, winner of the 2020 CNRS Gold Medal, pictured here at the Paris Observatory.
Frédérique Plas/LERMA/CNRS Photothèque
Share
Share
This year’s CNRS Gold Medal has been awarded to Françoise Combes. Her work as an astrophysicist has enabled her to identify molecules in the far reaches of the Universe and unveil the secrets of galaxies and dark matter, making her one of the leading explorers of the cosmos.

Due to the Covid-19 pandemic, the interview is not conducted in her office, but from her home, by videoconference. The virtual window reveals a slender woman seated in front of a large bookcase. She sports a boyish haircut, a dainty blouse and a smile as shy as it is radiant. Françoise Combes, 68, an astrophysicist at the Laboratory for Studies of Radiation and Matter in Astrophysics and Atmospheres (LERMA)1, and since 2014 holder of the Galaxies and Cosmology Chair at the Collège de France, is the winner of the CNRS 2020 Gold Medal. “In 1983, the prize was awarded to Evry Schatzman, with whom I began my career,” the scientist recalls, pointing out that in a way the wheel has come full circle.

After graduating from the Ecole Normale Supérieure (ENS) in Paris, and obtaining an advanced teaching diploma (agrégation) in physics, she began her career in the discipline with a Master of Advanced Studies (DEA) in quantum physics. “I’m often asked whether I was predestined for astronomy, and if as a child I was already peering through a telescope. But actually at the time, I didn’t really know what I wanted to do.” After obtaining her DEA, she embarked on a postgraduate thesis in theoretical astrophysics under the supervision of Evry Schatzman, on the cosmological model of symmetry between matter and antimatter, the “mirror image” of ordinary matter. In this model, for every particle of matter in the Universe there is thought to have been an antiparticle with the same mass but opposite electrical charge. However, maps of the cosmic microwave background (the first light emitted by the Universe) show that in fact there was more matter than antimatter. According to the Standard Model, there was one extra matter particle for every billion pairs of matter/antimatter particles: not much of a difference, but enough to explain why there is something rather than nothing. Without this excess, matter and antimatter would have annihilated each other and nothing would exist. “It’s fascinating!” Combes exclaims. “What phenomenon responsible for this subtle yet crucial excess of matter do we owe our own existence to? With a small group of researchers, including Evry Schatzman and Roland Omnès, we developed a scenario that our own calculations eventually invalidated. At the end of my thesis I felt a bit lost, and was wondering where to go next. It was Pierre Encrenaz who set me off in a new direction.”

A hunter of interstellar molecules

It was 1975, and Encrenaz, today a university professor and emeritus at the Paris Observatory, was setting up the first French millimetre-wave2 radio astronomy laboratory. Under his guidance, Combes embarked on a PhD thesis and turned her brilliant mind to a brand new discipline: the chemistry of the interstellar medium. At the time, only a few molecules had yet been detected in the space between the stars of our own Milky Way, but it was suspected that complex chemistry was at work there. So the young researcher set out to hunt down molecules in space using US-based next-generation telescopes, such as the 12-metre dish on Kitt Peak, Arizona, the 5-metre antenna at the McDonald Observatory, Texas, and the 4.6-metre dish at the Aerospace Corporation in California. 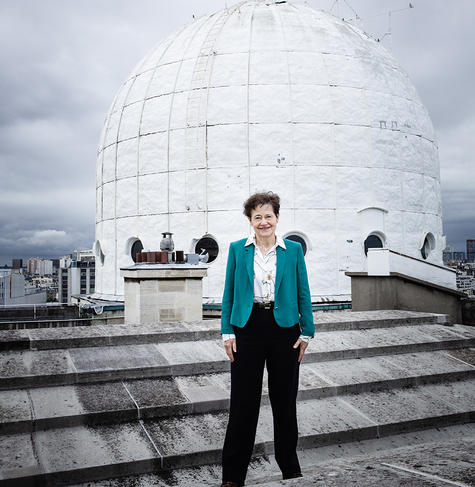 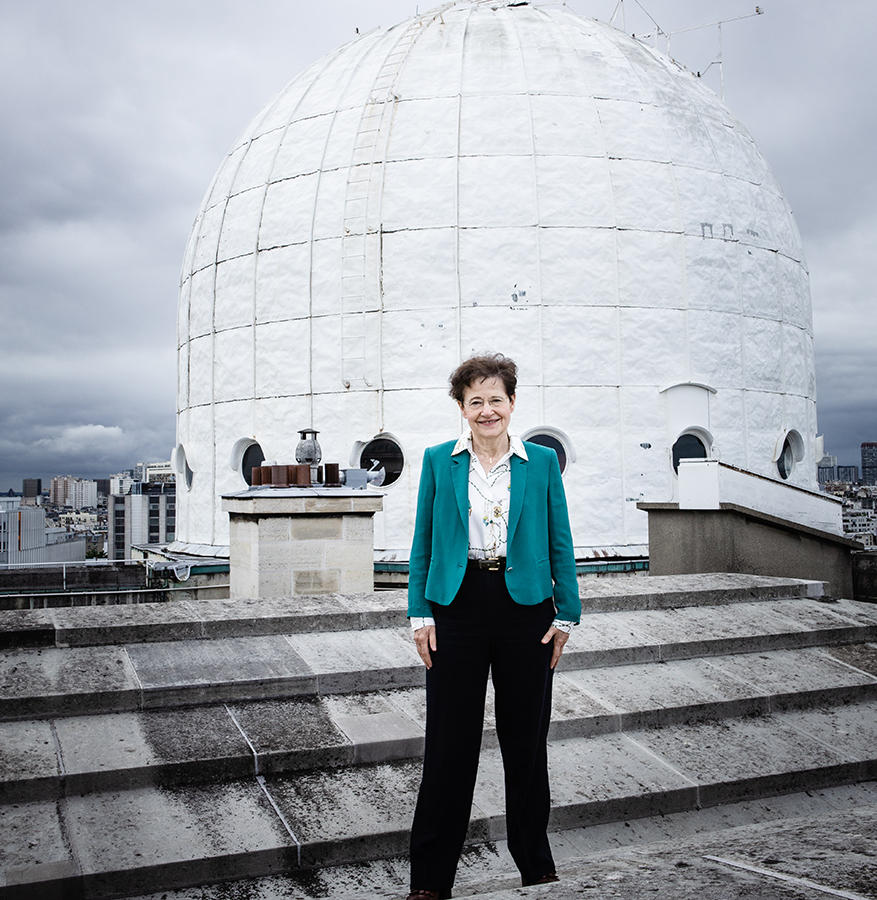 After a series of painstaking observations (and giving birth to her first child), Combes co-authored a paper that announced a scientific first: the detection of carbon monoxide (CO) molecules, not in our own Milky Way, but in the Andromeda galaxy, 2.2 billion light years from Earth. “The discovery brought us quite a bit of publicity, which helped our search for molecules to get off to a pretty good start,” she says modestly.

Immediately after this success, Combes landed a position as an academic and then as a senior lecturer at the ENS (in the meanwhile giving birth to two more children), before being appointed deputy director of the ENS Physics Laboratory, a position she held from 1985 to 1989. "I also taught courses at Université Paris-VI while trying, unsuccessfully, to obtain a permanent position there. Having said that, I have no regrets: in 1989, I was finally taken on as an astronomer at the Paris Observatory, a status that at last enabled me to concentrate almost exclusively on research!” 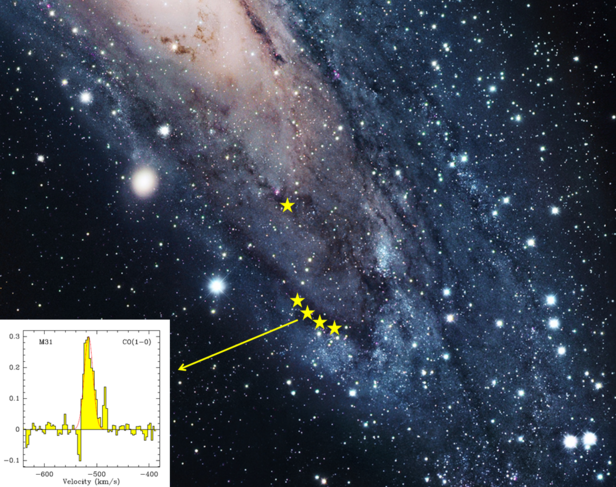 First detection of carbon monoxide (CO) in the Andromeda galaxy. All yellow symbols are positions where the CO molecule has been detected, indicating the presence of molecular clouds in which new stars are born. 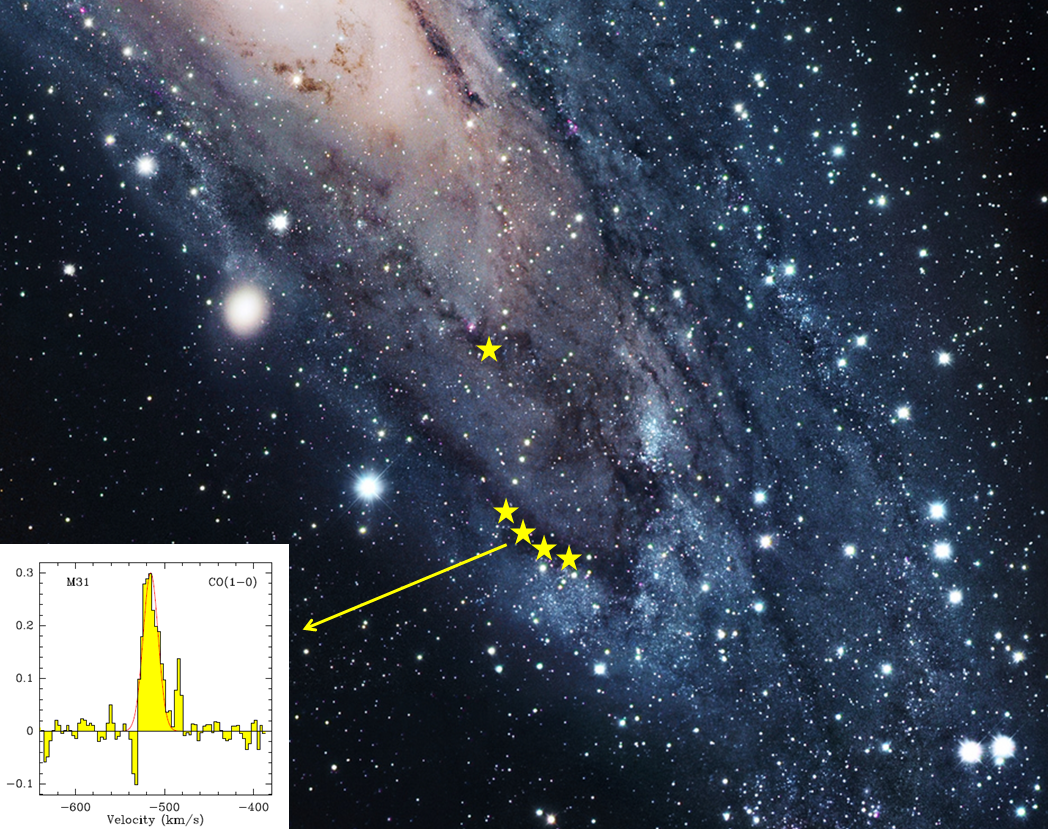 From then on, she took part in an ever-increasing number of observation campaigns, in particular with the 15-metre antenna of the SEST (Swedish-ESO Submillimetre Telescope) in Chile and the large 30-metre antenna of the Institute for Radio Astronomy in the Millimetre range (IRAM) near Granada, Spain. “I worked in the field several weeks a year, with the support of my husband who looked after our three children.” In this way, she discovered a multitude of other molecules lurking in distant galaxies, including glycine, oxygen and water.  Her search gradually led her to focus on what were to become her favourite objects: galaxies.

An anatomist of galaxies

“As early as 1985, mainly thanks to the IRAS satellite, we noticed that molecular hydrogen3 was particularly abundant in interacting galaxies.” Such galaxies move around each other in a graceful dance, forming tidal tails of stars, gas and dust. They also exhibit high rates of star formation, giving birth to 1,000 new stars per year, compared with at most one or two for isolated systems such as the Milky Way. “These stars are born from huge clouds of molecular gas. Together with my first PhD students, François Boulanger and Fabienne Casoli, who in spring 2020 became the first woman to be appointed President of the Paris Observatory, I was trying to understand how these molecules come together to form these huge star-forming clouds.” 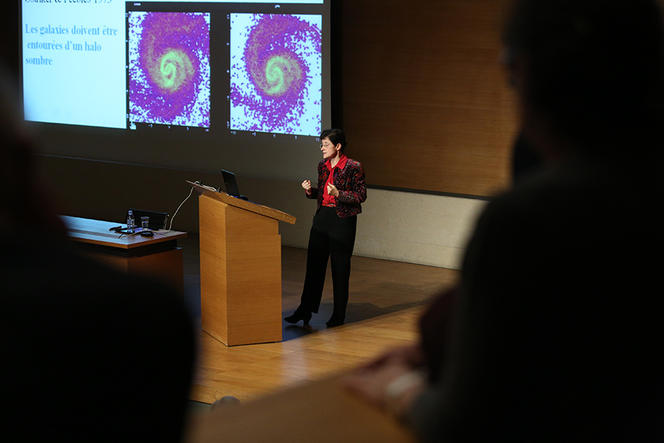 Inaugural lecture at the Collège de France, on December 18, 2014. 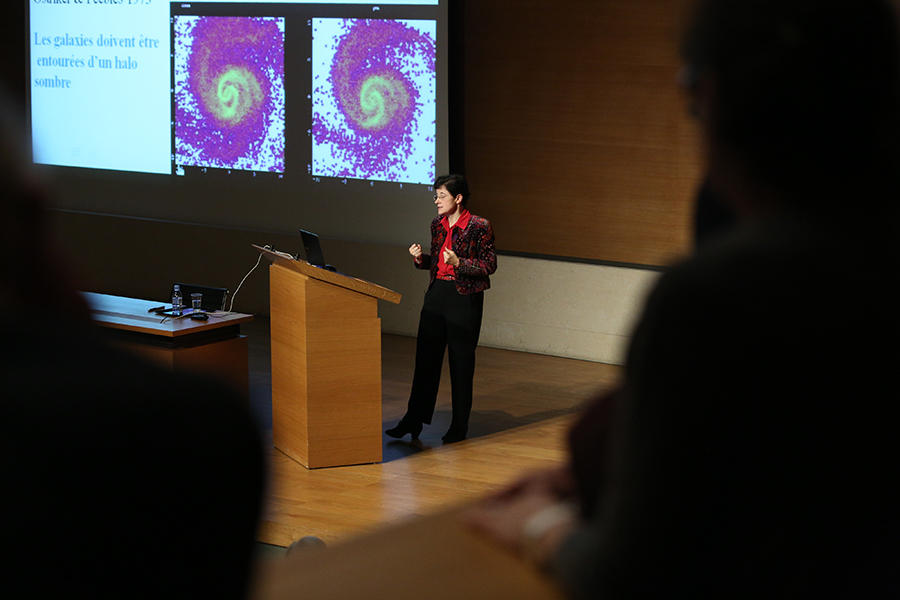 From 2001 to 2008 she headed the French National Programme “Galaxies”, one of the national projects run by the CNRS’s National Institute for Earth Sciences and Astronomy (INSU). From 2005, together with teams from the Paris Institute of Astrophysics (IAP) and the French Alternative Energies and Atomic Energy Commission (CEA), she took part in the Horizon programme, funded by the French National Research Agency (ANR), which simulated the evolution of the cosmos right out to the limits of the observable Universe. As part of the project, her team created a veritable atlas of the cosmos. “We designed a huge database of galaxies of all masses and types (spiral, dwarf, lenticular and so on), whose interactions and mergers can be simulated at will,” Combes explains. By playing around with these (virtual) phenomena, and combining this information with real data gathered by telescopes and giant dishes, she was able to dissect galaxies and reveal the unsuspected secrets hiding within them. In fact, it is this work that provided an explanation for the formation of bulges in spiral star systems (see box below).

Françoise Combes is also one of France’s leading experts on dark matter. The fate of galaxies is inextricably linked to that component, which makes up more than 80% of all the matter in the Universe and whose nature is still a mystery. “Dark matter plays an absolutely essential role in the formation of galaxies as we see them today,” she explains. “In the earliest days of the Universe, matter couldn’t clump together because photons prevented it from doing so. However, dark matter, which doesn’t interact with light, could easily collapse under the influence of gravity, forming dark galaxies. Once released from the grip of the photons, ordinary matter was then able to accrete there, some 380,000 years after the Big Bang.”

As soon as she began investigating galaxies, the astrophysicist started looking not only at the various models for dark matter but also at alternative scenarios. For she is in no doubt that the search for WIMPs and neutralinos, dark matter particles theorised as early as 1985, is about to take a fresh direction. “We’ve spent 35 years looking for WIMPs, using huge, increasingly powerful detectors. It’s time to try out fresh approaches.”

The scientist is attempting to explore these new possibilities, while at the same time trying to discover the nature of invisible normal matter. “What’s not so well known is that only 10% of this normal, so called baryonic, matter is visible, namely stars, galaxies and galaxy clusters.” The rest is certainly made up of hot or cold gas, and according to the models she is developing, part of it could consist of cold, dark molecular gas.

When asked what she would have done in life if she hadn’t become one of the leading investigators of the cosmos, Françoise Combes hesitates. “Ah, that’s a big question… A biologist perhaps? Or maybe a painter! I love painting landscapes and portraits in the impressionist style. It’s very thought-provoking.” She is too shy to show us her artwork on the spot, but later emailed us a lovely painting: a portrait of a spiral galaxy.

Galaxies up close and personal

Françoise Combes has helped to reveal the structure of galaxies in greater detail than ever before. In the 1970s and 1980s, when the first numerical simulations were being carried out in two dimensions, she decided to make them more realistic by using three dimensions. This ingenious idea opened up a fresh perspective, enabling her to solve a hitherto unexplained mystery: the formation of a bulge at the centre of spiral galaxies. The key to the puzzle is the central bar, a sort of elongated shape in the centre of the galaxy where the density of stars is greater. “The bar pushes the stars up in a direction perpendicular to the plane,” she explains. “As a result, they move upwards, forming a bulge, rather than staying confined in a very thin disc.” Her simulations also showed how the bar accelerates gas towards the centre of the galaxy, thus feeding the central black hole.

Article
First-ever physical model consistent with the history of the...
Gold Medal