The French city of Toulouse, which hosts Esof 2018, has also been labeled "European City of Science."
R. MATTES/HEMIS.FR
Share
Share
The EuroScience Open Forum (Esof) is being held this year in France for the first time since it was created in 2004. Spotlight on the eighth edition of Europe’s largest interdisciplinary meeting of science and innovation.

From July 9 to 14, 2018, the European scientific community will be convening in Toulouse. Two years after Manchester, France’s “Pink City,” as it is nicknamed, has been selected to host the EuroScience Open Forum (Esof), the largest gathering on the European continent devoted to science and innovation. Throughout the week, researchers, science journalists, politicians and business leaders will be comparing notes and exchanging viewpoints on the relationships between science and society, the role of innovation and research policies. “The European framework is more suitable than national frameworks for this,” explains Martin Andler, professor emeritus at the LMV1 and vice president of Esof 2018 Programme Committee and Vice-president of Euroscience, the founding organization behind Esof. “This is exactly the right level for asking questions about the role of science in society or for discussing a number of issues that arise from the application of fundamental research.”

With the presence of scientific actors from over 80 countries, ranging from junior staff to highly skilled and renowned experts, Esof is preparing to prioritize exchange by stressing its forum and interdisciplinary aspects. “At each Esof, meetings take place across disciplines and it is extremely satisfying to be able to say you’re a part of this interdisciplinary crucible,” explains biologist Anne Cambon-Thomsen, emeritus CNRS senior researcher and Forum organizer.

The 180 sessions programmed over the five and a half days of the forum—of which the CNRS is a partner—should no doubt attract large crowds. The topics have in fact been selected to reflect current scientific, social and political issues, from artificial intelligence to healthcare, the environment and scientific integrity.

Among the major plenary keynotes, we would note one devoted to the digital humanities as well as that of John Ioannidis, a researcher known for having launched the debate over the reproducibility of scientific results. The space science panel should also be quite popular, as the one on climate challenges, moderated by CNRS gold medalist Jean Jouzel, which will welcome American researcher Camille Parmesan, one of the scientists selected by French President Emmanuel Macron’s “Make our planet great again” call. The scheduled sessions on the theme of open science also promise lively debates. “Researchers will be able to attend talks that invite them to see the links between what they’re doing and other fields of research and disciplines,” Andler adds. 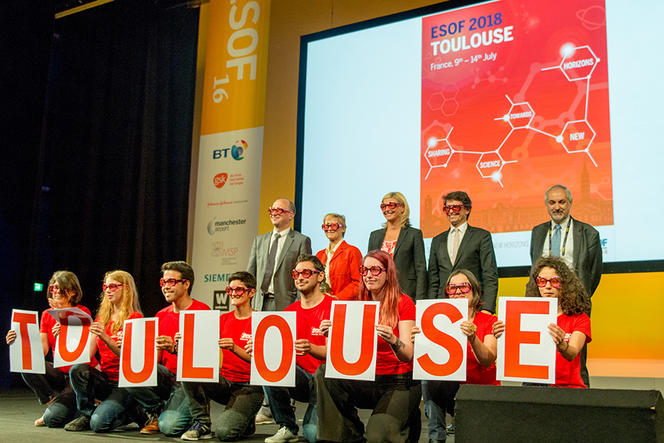 The Toulouse 2018 team on stage at the closing ceremony of Esof 2016 in Manchester (United Kingdom). 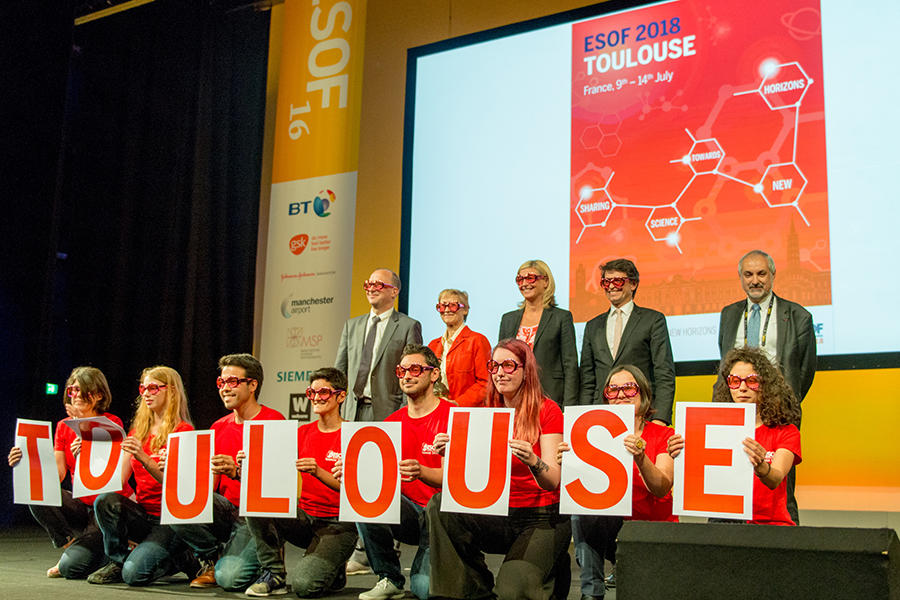 The voice of science

Esof, a real forum for exchange, will no doubt also give the scientific community an opportunity to express its views on the European Commission’s next framework program for research and innovation called “Horizon Europe.” “The idea is that Esof will provide a forum for discussion about the proposed program, whose blueprint was recently made public before being passed on to other European institutions,” explains Anne Cambon-Thomsen. “This is one of the wishes of the European Commission. There will be discussion platforms and major plenary panels with contributions by Carlos Moedas, the European Commissioner for Research, Innovation and Science” and the new Director General Research and Innovation of the Commission, Jean-Eric Paquet. For Andler and Cambon-Thomsen, “Esof represents an authentic platform for researchers to voice their opinions on the role of science in Europe. Something that is absolutely essential.”

The economic world will also have a place in the “Science to business” program and within the company village, located inside the exhibition hall. “It’s extremely valuable for companies to be able to showcase their activities in front of this very wide and varied audience, not the kind normally found at science conferences,” adds Cambon-Thomsen. The careers program, aimed at 30 to 40% of the participants already embarked on a professional scientific trajectory, also forms a central part of Esof. In addition to dedicated sessions, special exhibition spaces and information on mobility and welcoming programs will also be specifically addressed to these participants. The opportunity to meet doctoral and postdoctoral students from other countries and other disciplines and to exchange and share viewpoints is another valuable facet of the forum. In addition, a special branch of the forum, Yesof (Esof for the youth), will highlight initiatives developed by young academics who interact with researchers.

Plans have been afoot for several years to organize this forum in France, which has put the spotlight on French research undertaken within the host country’s European research program. “It is a privilege to host this forum, which attracts key scientific players from around Europe. It is an opportunity for international exchange and an excellent window onto current scientific developments in France and in the region,” stresses Cambon-Thomsen.

The selection of Toulouse as host was accompanied by the designation of the city as “European City of Science 2018,” which in itself has created great momentum. Over 170 events aimed at different publics will be held, such as the 50th anniversary of the CNRS robotics-specialized LAAS2 and the Optic 2018 Congress, which will have close to a thousand participants.

“What we really don’t want is to reinforce the concept of an ivory-tower researcher that transmits what he or she knows to the general public. We are really trying to make the format participatory and engaging,” emphasises Andler. In parallel to the forum, Esof will be holding a number of interactive exhibitions in the city aimed at the general public as part of the “Science in the City” Festival that runs July 7 to 15, and where a number of CNRS laboratories3 will be able to showcase what they do best.

Article
Feminicide: naming the crime in order to fight it
Science Communication

Article
Why the World will be Marching for Science
ESOF