Home / Articles / The Secret Life of a Clownfish

The Secret Life of a Clownfish

Home / Articles / The Secret Life of a Clownfish

The Secret Life of a Clownfish

The clownfish species Amphiprion ocellaris is the one featured in the animated film "Finding Nemo."
Loïc HONORE
Share
Share
The creators of the animated film "Finding Nemo" didn't tell us everything about the clownfish. From the role of its white stripes to its struggle for reproduction and hermaphroditism, there's much more to discover about this fascinating star of our coral reefs.

A larva drifts in the middle of the ocean, left to its own devices in the vastness of the sea. The egg that housed it hatched a few days ago, and it is now preparing to return to the reef. The transparent larva then transforms into a juvenile, with its shimmering colors and vertical white bars. It begins the "recruiting" phase, in which it seeks out a sea anemone to house it for the remainder of its life. A future Nemo? Not exactly. There are actually 28 different clownfish species, each with anywhere between zero and 3 white bars. Our friend Nemo, also known by the name of Amphiprion ocellaris, is one of the most common.

Understanding how these white bars appear, along with the purpose they serve, is one of the goals of both Vincent Laudet, a researcher and director of l’Observatoire océanologique de Banyuls-sur-Mer,1 and his colleagues from l’université de Liège and the CRIOBE laboratory,2 authors of a study that appeared last September. Answering these questions led them to a number of other discoveries.

Behind five years of research on clownfish lies an interest in the role played by hormones in evolution, notably thyroid hormones, which control metamorphosis in mammals. For all that, their role is not well understood. The varying responses to thyroid hormones produce different types of metamorphoses. To study them more closely, Laudet and his colleagues were in search of animals with obvious variations between close species. Coral reef fish proved to be a perfect example. "The advantage of the clownfish is that it is practically the only coral reef fish whose entire life cycle can be reproduced in the laboratory. So when I moved to Banyuls three years ago, we set up a breeding farm," explains Laudet.

The famous white bars appear during larva to juvenile metamorphosis, as part of the recruitment phase. "We showed that their appearance actually takes place under the control of thyroid hormones." The white bars appear in a specific order—from the head toward the tail by way of the trunk—and follow four patterns: no bar, 1 bar on the head, 2 bars on the head and trunk, and 3 bars on the head, trunk, and tail. "It's always in that order. No clownfish has only one bar on the tail or the trunk, or two bars on the trunk and tail. This suggests that a system controls all of this. So we focused on the evolutionary history of clownfish and their bars. It's a story of loss." 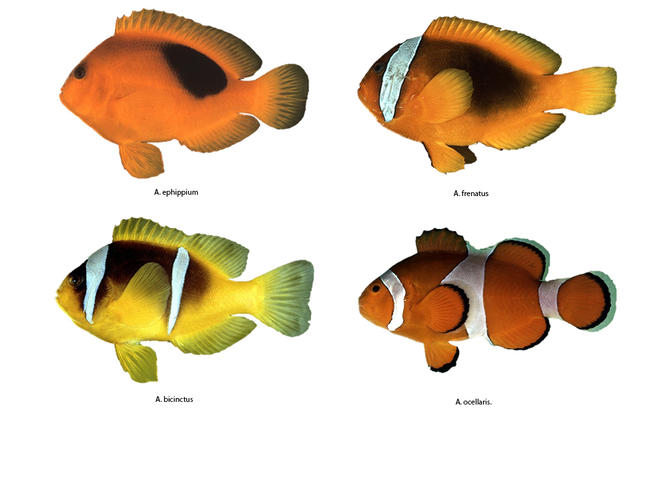 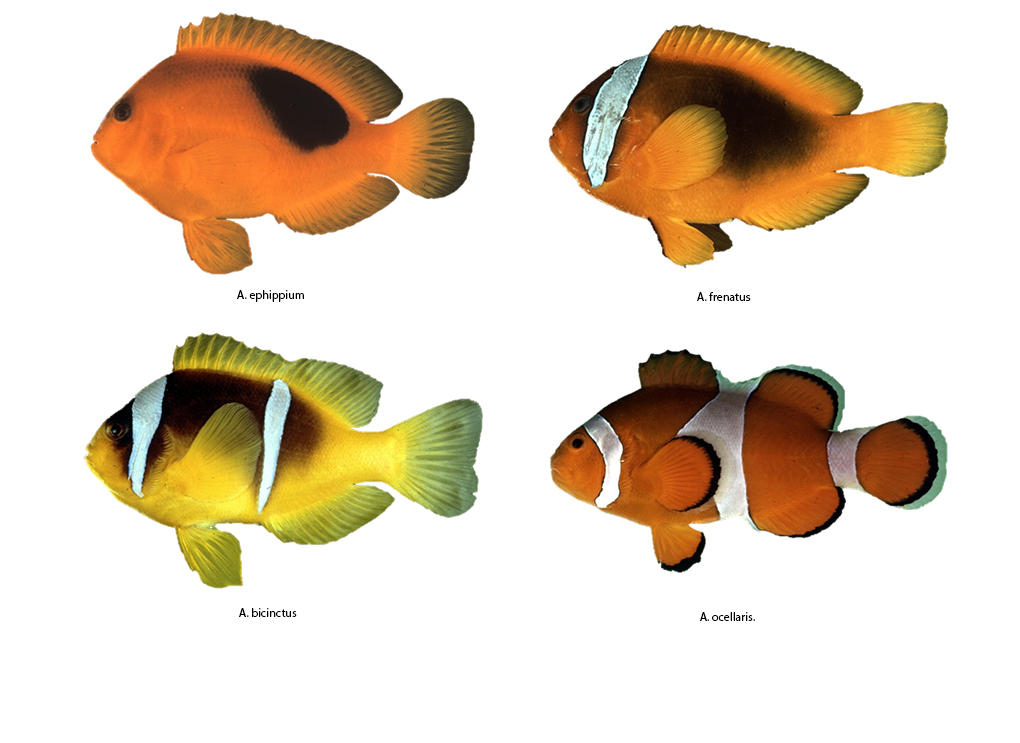 The ancestral species had 3 bars, before their loss—always in a precise order—was observed on a number of occasions during the diversification of clownfish: from the tail toward the head by way of the trunk, that is to say in the opposite order as the development of the individual. "There is a striking parallel between what we see during the evolution of species (phylogenesis), and what we see during the development of individuals (ontogenesis)."

During development, juveniles sometimes lose bars while transitioning to the adult stage. "We were surprised by the case of A. frenatus. The juvenile has two or three bars, but the adult only has one." This transformation also takes place in the opposite order of development: from the tail toward the head by way of the trunk. "This suggests that there is a system constrained by the anteroposterior polarity of the body (the distribution of organs along the head-tail axis), which controls the number of bars. The next step is to identify the genes that influence it." The whiteness of the bars is due to specific cells that reflect light, known as iridophores.

How A. frenatus adults acquire their bars is also a story of loss. At the larval stage, no white bars appears. During metamorphosis to the juvenile stage one appears, then two and a third bar, on the tail, make their appearance. As an adult, only one bar remains on the head.

How A. frenatus adults acquire their bars is also a story of loss. At the larval stage, no white bars appears. During metamorphosis to the juvenile stage one appears, then two and a third bar, on the tail, make their appearance. As an adult, only one bar remains on the head.
Pauline SALIS; John E. RANDALL
Pauline SALIS; John E. RANDALL
Share
Share

To better understand the role of these white bars, researchers became interested in the species' living environment—the sea anemone—as well as overall social structure. The latter is dominated by a large female, who defends the anemone from small predators. Then comes a smaller male, along with a number of juveniles that form a line according to their size. When a new recruit arrives, it positions itself in the line. "Yet sometimes the female is killed by a grouper, or some other passing predator." The female's role is then assumed by the male, a case referred to as successive hermaphroditism.

Following the same logic, the first juvenile in line would transform into a male, with the ensuing fish advancing one step in line. "In Finding Nemo the mother clownfish dies, and the father takes care of his young as they experience lots of adventures. In reality, Nemo's father would transform into a mother, Nemo into a father, and the two would have babies together! We understand why the film company changed reality!" Each fish carefully defends its role in this hierarchy. "It’s extraordinary to imagine that certain juveniles can wait 10, 20, or 30 years before their turn comes! The life expectancy of a clownfish is between 30 to 50 years, which is enormous for a fish of that size." 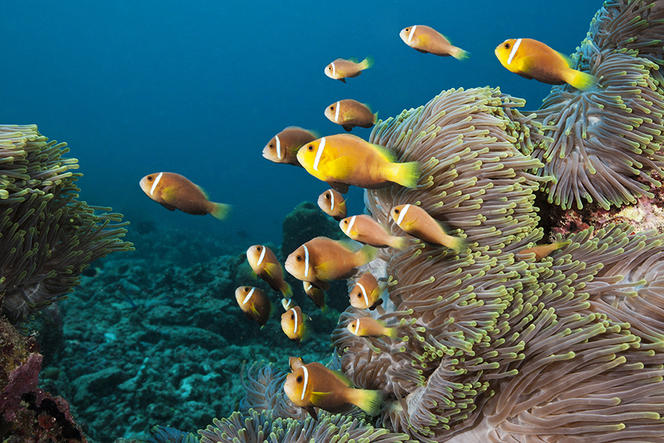 Clownfish (Amphiprion nigripes) live in groups around their anemones: insensitive to the anemone's stinging tentacles, they hide inside to protect themselves from predators and, in return, the anemone feeds on their excrement. 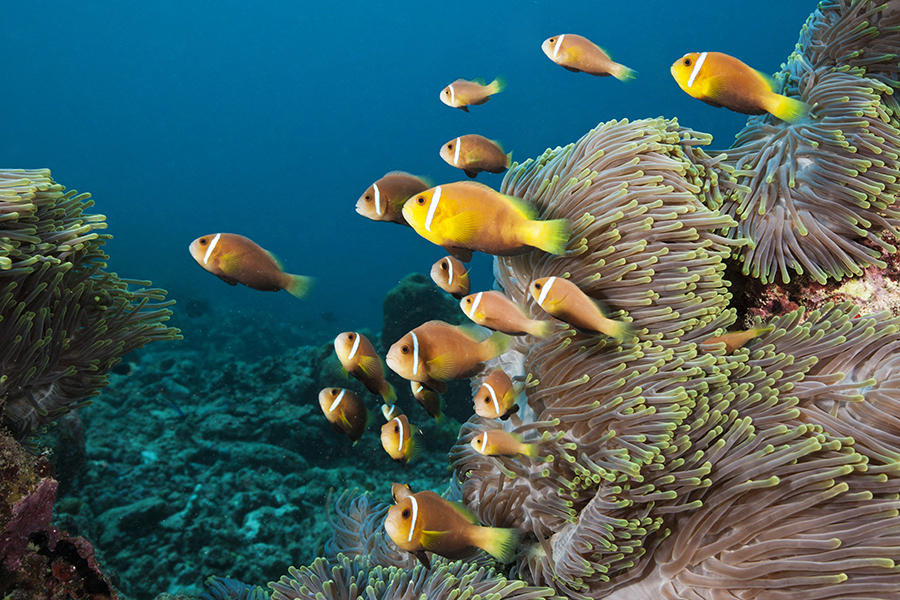 A fascinating phenomenon takes place when a juvenile disappears in the line: If the juvenile in 2nd position disappears, the 3rd one grows until it is as big as the 2nd one was. If the 1st one sees that the 3rd one is growing too much, it starts attacking it, and will potentially expulse it from the anemone. "For a clownfish, being expulsed from the anemone means certain death since it is no longer protected. It's the larger one's aggressiveness that halts the smaller one's growth! There is a great deal of mortality resulting from disputes."

What remains to be understood is why some species lose bars between the juvenile and adult phases. "It's in the interest of the juvenile, a young recruit who enters the anemone, to convey that he is different than those in line, that he is not competing for future reproduction. To our great surprise, when clownfish of different species share an anemone, they always have a different number of bars. Put another way, fish from different species in the same anemone never have the same number of bars. We therefore believe that the bars help them distinguish themselves from one another, which is to say they are useful for interspecific recognition."

At one with the sea anemone

The relation of the clownfish to its environment is also fascinating. In a study published in August 2018 in scientific reports,3 ecologists from the CNRS, the université de Montpellier, Andromède Océanologie, and the Centre universitaire de Mayotte demonstrated that the esthetic value of tropical fish is not correlated to their ecological value. In other words, the fish that are the most ecologically important in terms of their characteristics (size, diet, way of life...) are not those that were deemed the most beautiful by individuals consulted for the study. These results are a warning regarding the importance we ascribe to estheticism in our relation to the environment and our perception of biodiversity.

"In comparison to the surgeonfish (Dory in Finding Nemo), which is absolutely essential to controlling the growth of algae, and thereby the reef's survival, the clownfish, which is considered to be one of the most beautiful coral reef fish, clearly has a less indispensable role." It is nevertheless important for the survival of sea anemones, with which clownfish live in symbiosis. More precisely, this is an example of mutualism, because both benefit from the relation. The clownfish, which is unaffected by the anemone's utricating tentacles, hides inside to protect itself from predators. In return, the anemone feeds on the excrement of the clownfish. Anemones, which are photosynthetic, produce oxygen during the day, but lack it at night. If the water doesn't circulate they end up in hypoxia, a situation in which oxygen supply does not meet their needs. "A marvelous form of behavior has been observed. At night, the clownfish bat their fins in order to constantly send oxygenated water toward the anemone. An anemone without a clownfish grows less quickly, and doesn't do as well. I believe that if we were to lose clownfish, we would quickly lose anemones as well. Can you imagine a coral reef without sea anemones?"

An additional danger is threatening anemones. In a study published in October 2017, researchers from the Centre de recherches insulaires et observatoire de l’environnement raised warnings regarding the falling birth rate of clownfish, caused by sea anemones bleaching, which is similar to coral bleaching. "If young recruits have a choice, they tend to choose an unbleached anemone. If they all begin to bleach due to global warming, they won’t survive, and neither will clownfish." 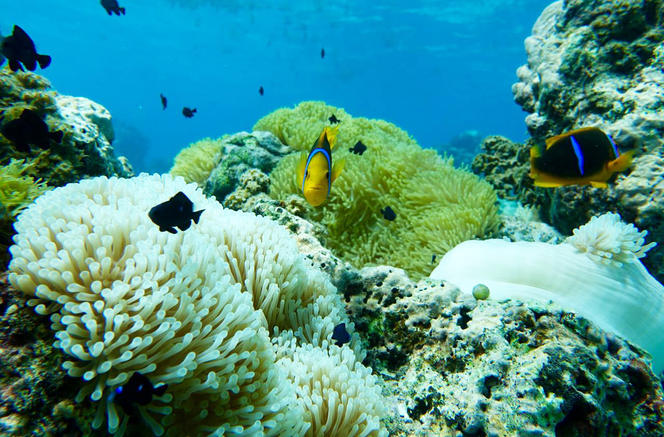 Clownfish (Amphiprion chrysopterus) and anemones in reefs around the island of Moorea, French Polynesia. The golden hue of the anemones is due to microalgae present in their tentacles. During episodes of high temperatures, these are expelled, which produces their bleaching. 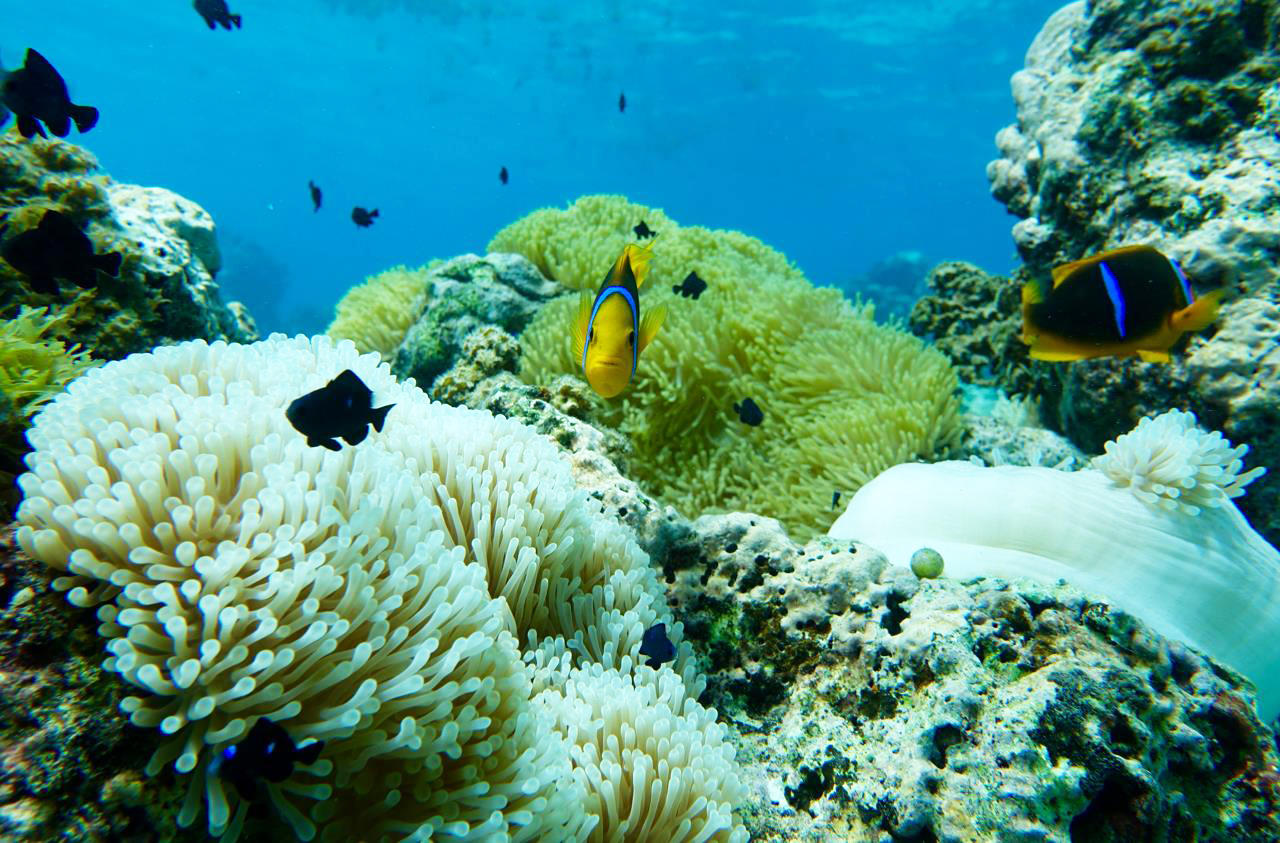 Clownfish (Amphiprion chrysopterus) and anemones in reefs around the island of Moorea, French Polynesia. The golden hue of the anemones is due to microalgae present in their tentacles. During episodes of high temperatures, these are expelled, which produces their bleaching.
Suzanne C. Mills
Suzanne C. Mills
Share
Share

Environmental pollutants represent another danger. Thyroid hormone receptors are the target of endocrine disruptors. Chlorpyrifos, a widely-used insecticide, can affect the metamorphosis of clownfish and coral reef fish, as it alters the response to thyroid hormones by modifying the transformation of larva in juveniles. "This raises questions regarding the preservation of biodiversity, which we can study thanks to our research."

The fact that each discovery leads to new questions makes the clownfish an invaluable research subject, not only from the viewpoint of evolution and development, but also from that of ecology. "How do larva make the decision to return to the coral reef? What factors determine their thyroid hormone level, or their subsequent metamorphosis at the suitable moment? How do they find the anemone in which they will live and become accepted? And how do pesticides and other pollutants disturb these key stages in the life of the clownfish? All of this remains to be discovered. I am pleased that we are talking about the clownfish, because I believe it offers an infinite and fascinating model for scientists."

Article
The new frontiers of the living world
Reef