Home / Articles / The Cold that Comes from Light

The Cold that Comes from Light

Home / Articles / The Cold that Comes from Light

The Cold that Comes from Light

How strange light is! It provides illumination and heating, transports information, and also generates cold. And not just any cold, but the most glacial temperatures imaginable... down to a billionth of a degree above absolute zeroFermerThis temperature is equal to -273.15 °C (or 0 kelvin) and is the lowest that exists in the Universe. All atoms and particles become perfectly still., or -273.15°C! The secret of this mind boggling refrigeration stems from the principle that the faster the atoms in a gas are agitated, the higher its temperature. On that basis, physicists had the idea of slowing down these particles, but the question was how? The answer came in the form of the radiation pressureFermerLike gas pressure, which is created by collisions between a surface and gas atoms (or molecules), radiation pressure results from the collisions of photons that make up a beam of light. exerted by laser beams on the atoms. When the point of light that constitutes a photon is absorbed (or emitted) by an atom, it transmits (or removes) a certain momentum, just as a firing cannonball pushes the cannon backwards. As a result, the speed of the atom is modified by a few centimeters per second. This slight variation may seem negligible when compared with the hundreds of meters per second at which an atom moves at room temperature, but if the procedure is repeated 30 million times per second using a laser, the difference can become decisive!

This idea was implemented during the 1980s using optical molasses, a technique that revolutionized a number of fields in modern physics, from high precision metrology to research on new states of matter. It involves crossing a series of laser beams from opposite directions within an enclosed space, in order to create a kind of viscous environmentFermerIn physics, viscosity is a material's resistance to flow. The higher its viscosity, the slower it will flow. Honey, for example, has a higher viscosity than water. (the famous molasses) where the gas atoms will, as it were, become "glued" by the action of the photons. Today, this type of equipment is used by dozens of laboratories throughout the world. Optical molasses is based on the clever exploitation of the Doppler effect, a phenomenon used among other things by radars and ultrasound devices, in which the frequency of a wave is perceived differently depending on whether one is in movement relative to the emitter of the wave (and vice versa). As a result of this effect, for example, a fire engine's siren seems to change from low-pitched to high-pitched as it approaches the pedestrian who hears it, and from high-pitched to low-pitched as it moves away. 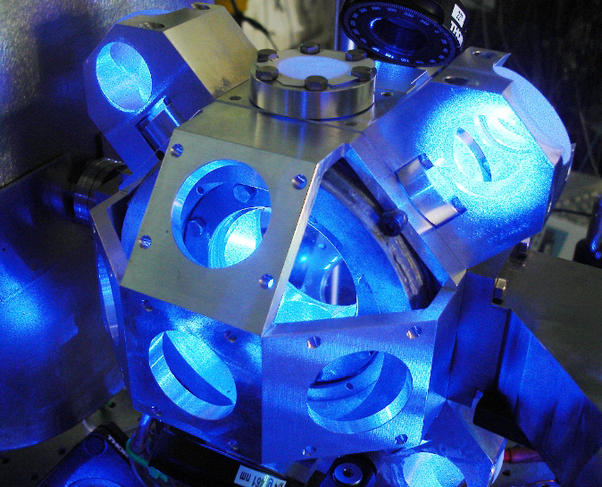 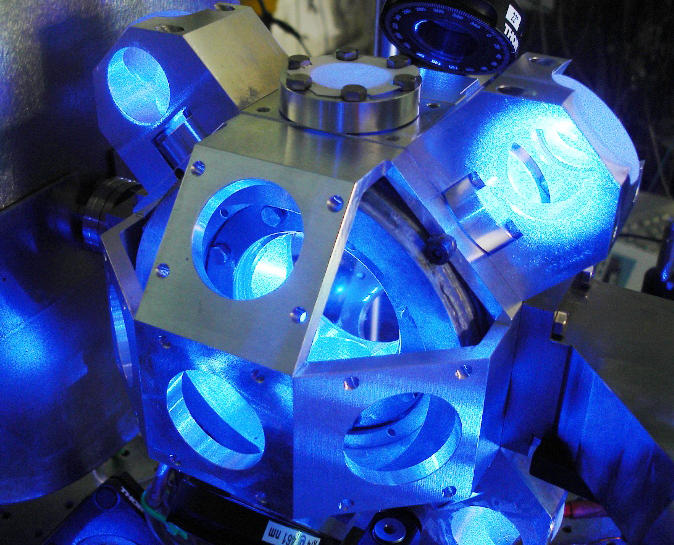 It is also known that an atom absorbs light only at certain specific frequencies, known as resonance. As it happens, the pressure exerted on an atom by two lasers from opposite directions cancels itself out. However, setting the lasers to frequencies slightly below that of resonance means that as soon as the atom is in movement, the apparent frequency of the laser that meets it reaches the resonance frequency through the Doppler effect. The laser then slows the atom down through radiation pressure. Physicists were thus able, in a fraction of a second, to slow the speed of millions of atoms to only about ten centimeters per second. In other words, they succeeded in bringing them to temperatures of approximately one tenth of a millionth of a degree above absolute zero!

This cooling technique using the Doppler effect—and more generally that of optical molasses—earned Claude Cohen-Tannoudji, of the Kastler-Brossel (LKB)1 laboratory, and his US colleagues Steven Chu and William Daniel Phillips the 1997 Nobel Prize in Physics. It was also behind a new generation of measuring instruments such as accelerometers, gyroscopes, and especially atomic clocks. 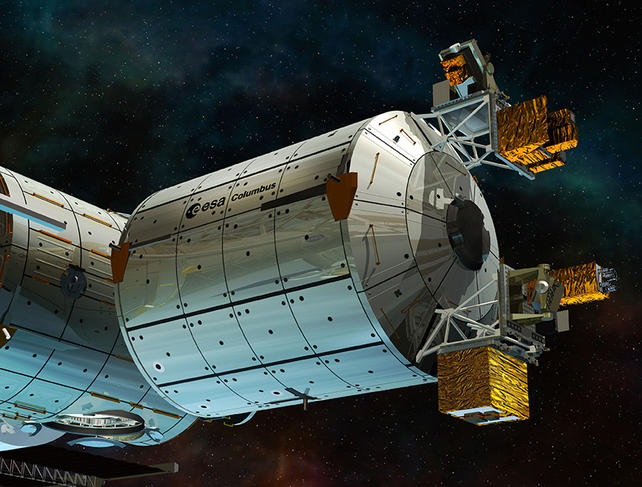 Artist's impression of the Columbus module from the International Space Station, to which the Pharao atomic clock (lower right) is secured. 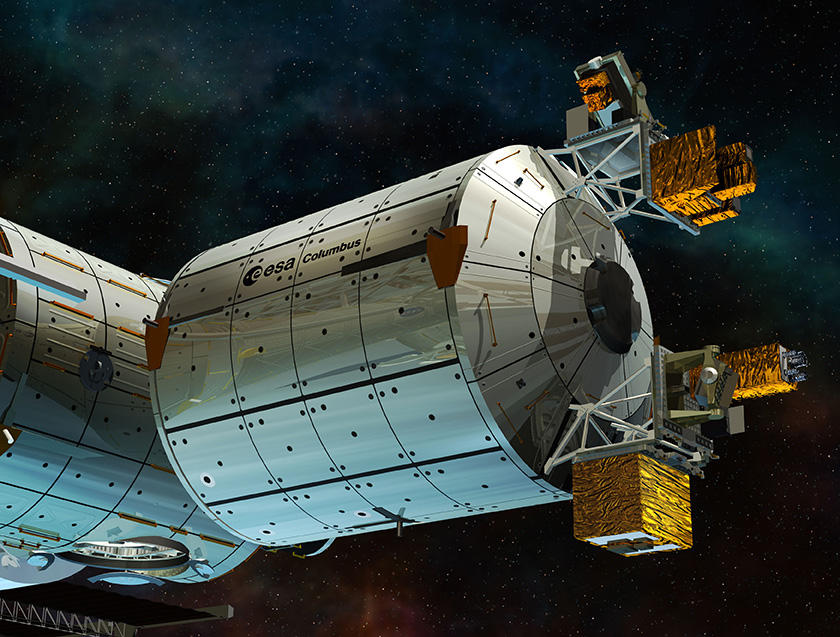 Artist's impression of the Columbus module from the International Space Station, to which the Pharao atomic clock (lower right) is secured.
D.DUCROS/ESA
D.DUCROS/ESA
Share
Share

Invented more than fifty years ago, the procedure used by these machines to count seconds is based on the fact that atoms absorb light and re-emit it at specific frequencies, which depend on the nature of that very same atom. The principle of an atomic clock is to adjust the frequency of an oscillator to that provided by one of these atoms. Physicists most often use cesium for this purpose. The choice of this chemical element is no coincidence as they want their clock to tell the seconds! According to the international agreements in force since 1967, a second corresponds precisely to the time it takes cesium to complete 9,192,631,770 oscillations.

However, it turns out that the performance of atomic clocks directly depends on the speed of atoms, and therefore on their temperature. "In fact, the faster the atoms, the less time physicists have to precisely compare the oscillator's frequency with the atom's, and the greater the Doppler shift in frequencies, which eventually has an impact on the quality of the measurement,” explains Noël Dimarcq, a CNRS senior researcher at the Syrte laboratory.2 Hence the development in the late 1980s in French laboratories such as Syrte and LKB, of a new type of clock: atomic fountains. In these devices, cesium atoms are cooled in an optical molasses and then launched upwards in an ascent of approximately one meter, before falling under the effect of gravity. By observing them when they are both ascending and descending, as well as repeating the operation a great many times, physicists were able to define the second with sixteen-digit accuracy—a level of precision one hundred times that of conventional clocks! Another advantage is their stability, as atomic fountains vary by one second once every... 300 million years! 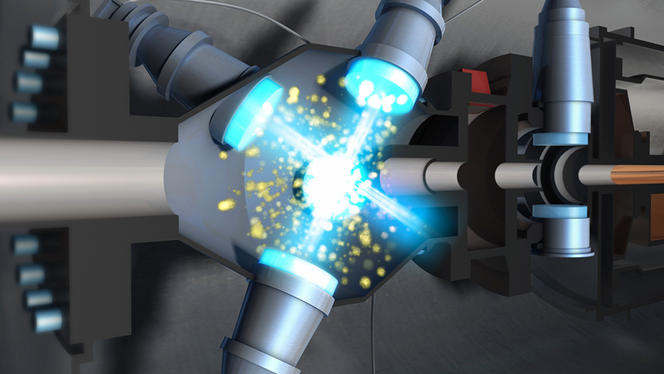 Optical molasses (center), in which cesium atoms are captured and cooled for the Pharao instrument. 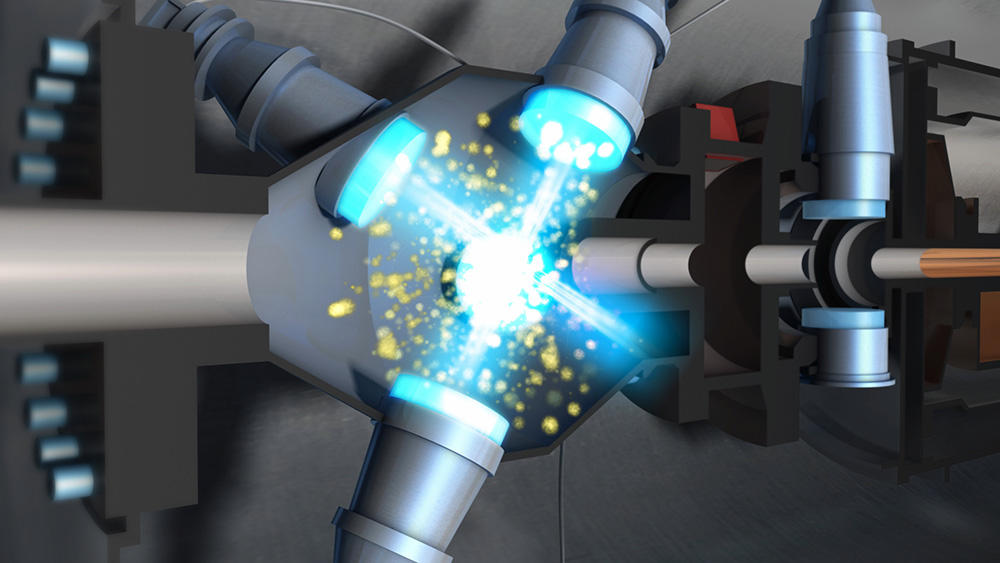 Although such levels of performance have already been surpassed by optical clocks using atomic frequencies that are 50,000 higher than that of cesium, they do not solely measure time. They also benefit systems such as GPS, whose reference time is synchronized through atomic fountains, as well as basic research for verifying certain physical theories like relativity. The European Space Agency's Atomic Clock Ensemble in Space (ACES) mission, which is under preparation, aims to install a Pharao clock using laser-cooled cesium atoms on board the International Space Station in the coming years. This clock was developed by the Centre National d'Etudes Spatiales (CNES), with the cooperation of French laboratories and industrial actors.3 By comparing this instrument’s measurements with those of similar equipment on Earth, physicists will be able to test Einstein's principle of general relativity with unprecedented accuracy!

Towards exotic states of matter

Laser cooling of atoms nevertheless has its limits. For instance, physicists have observed that beyond a certain level of temperature reduction, atoms confined in the densest optical molasses stop slowing down and end up coming together to form molecules. This has prompted the idea of a complementary technology that takes advantage of another property of light, which "attracts" and confines atoms where it is the most intense. The procedure consists in using an optical molasses to "fill in" one of these high radiation zones, and to then slowly reduce the light's intensity so as to expel fast atoms from the mixture, thereby retaining only the slowest ones. This cooling by evaporation can yield spectacular results, making it possible to raise the temperature of an atom cloud to values on the order of the nanokelvin, or a billionth of a degree above absolute zero! 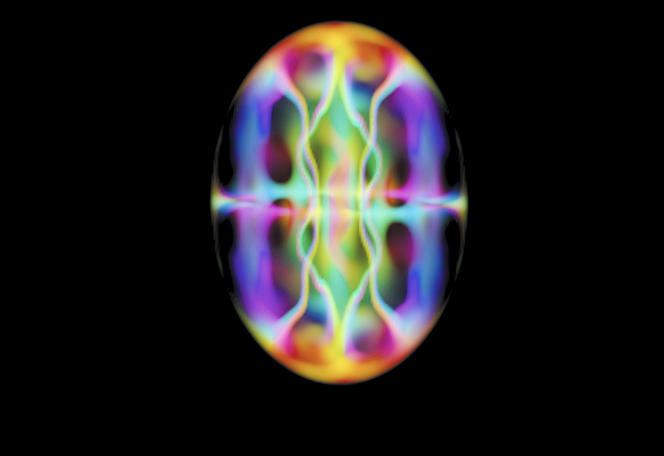 Computer simulation of a Bose-Einstein condensate obtained by confining and cooling atoms to a temperature close to absolute zero. 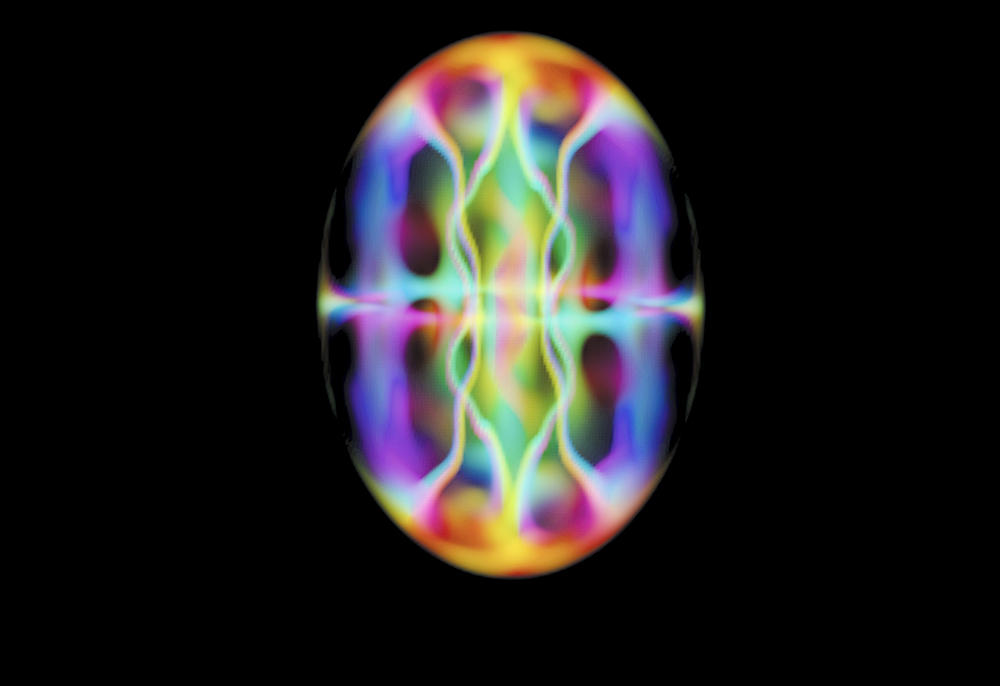 These levels are so low that they approach complete immobility, a world in which matter totally changes behavior and acquires truly exotic properties. For example, certain gases become superfluids, gaining the surprising capacity of flowing without viscosity. "In particular, it makes it possible to use bosons (i.e. atoms whose nucleus contains an even number of neutrons) to create Bose-Einstein condensates, a state of matter whose existence was predicted in the 1920s," points out Jean Dalibard, professor at the Collège de France. In these types of environments, millions of atoms placed in the same energy state—and thus undistinguishable from one another—begin to march in step like soldiers, behaving like photons in lasers. This was demonstrated by US scientists Eric Cornell and Carl Wieman, who along with their German colleague Wolfgang Ketterle subsequently received the 2001 Nobel Prize in Physics. "This quantum matter can be placed in 'boxes' created by light, and its transport from one box to another can then be studied, by analogy with how charges are conveyed in an electronic circuit," Dalibard explains. Due to their specific dimensions, these Bose-Einstein condensates (and their equivalent, Fermi gas, obtained not with bosons but with fermions, or atoms containing an odd-number of neutrons) could pave the way for advances well beyond accelerometers, gyroscopes, and atomic clocks. "Physicists are notably trying to use them as quantum simulators that can help solve highly complex problems in difficult fields such as the physics of unbalanced forces, topological matter, and superconductivity at high temperature," Dalibard says. Something that can’t leave scientists cold...

Slideshow
Ten samples that have marked the history of chemistry
Physics

Article
Is ventilation the ultimate weapon against Covid-19?
Atoms

Article
Sensors, the other quantum revolution

Article
Why Some Cities Are Hotter than Others