Home / Articles / Learning the lessons of the Hunga Tonga eruption

Learning the lessons of the Hunga Tonga eruption

Home / Articles / Learning the lessons of the Hunga Tonga eruption

Learning the lessons of the Hunga Tonga eruption

The Hunga Tonga eruption generated a giant plume of ash, gases and water vapour, which rose to an altitude of several dozen kilometres.
Tonga Geological Services / ZUMA Press / Zuma / RÉA
Share
Share
The Hunga Tonga submarine volcano, whose eruption in January 2022 was the most powerful the world has seen in the last thirty years, released massive amounts of water vapour and aerosols into the atmosphere. One year later, researchers are still studying the plume and its effects on the climate.

On 15 January 2022, an explosion twice as powerful as that of the biggest H-bomb ever made shook the Pacific and the entire planet when the eruption of the submarine volcano Hunga Tonga, which had begun in December 2021, reached its climax. Located in the Tonga Islands, it exploded with an energy equivalent to 110 megatonnes of TNT, spewing huge amounts of water vapour and aerosols into the atmosphere. Researchers the world over flocked to study the phenomenon and its aftermath. One year on, the event is still being analysed.

The submarine volcano emerged after the 2015 eruption, joining Hunga Tonga and Hunga Ha'apai Islands together (left, satellite image, 7 January, 2022). On 15 January, pictured on the right, the islands were once again separate.

Hunga Tonga reached a Volcanic Explosivity Index (VEI) of 5.7, making it the most powerful eruption since that of Mount Pinatubo in the Philippines in 1991, which had a VEI of 6. The index is based on various parameters such as the volume of material ejected and the height of the plume produced. It ranges from 0, for eruptions of the type found in Hawaii or the Piton de la Fournaise volcano in Réunion Island, which expels highly fluid lava with no explosion, to 8 for the most extreme cataclysms, which only take place every few tens of thousands of years.

Unlike Pinatubo, Hunga Tonga is a submarine volcano. Its magma chamber is only a few tens of metres beneath the surface, while two portions of the caldera are actually above sea level, forming the uninhabited islands of Hunga Tonga and Hunga Haʻapai. This led to huge amounts of water reacting with the lava, without prematurely stopping the eruption as would have been the case had the volcano been located at greater depth beneath the ocean surface. 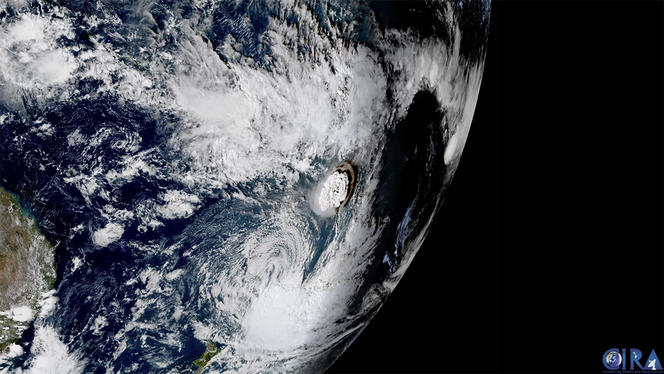 The plume takes on a thunderstorm-like anvil shape in the atmosphere, seen here by the Japanese weather satellite Himawari-8. The power of the blast also generated a tsunami that impacted coasts right around the Pacific. 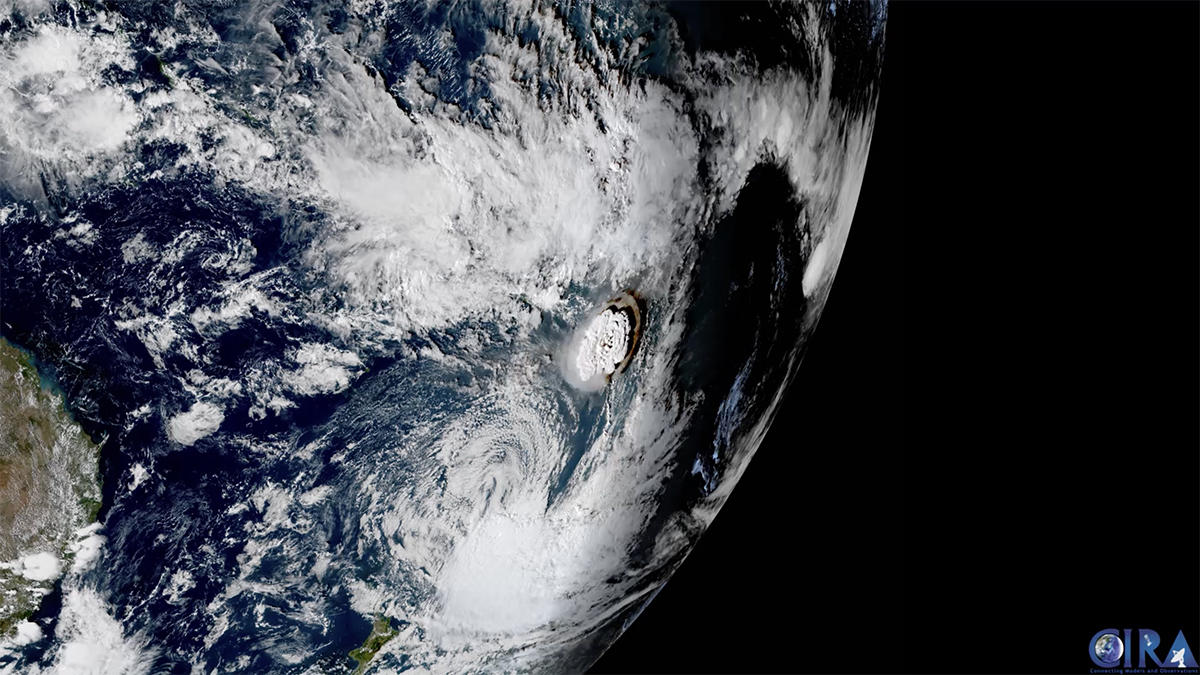 The eruption blasted material right through the entire stratosphere and into the mesosphere to an altitude of 58 kilometres, making it the tallest volcanic plume ever recorded. The extremely rapid disruption of the atmospheric column initially generated a whole range of acoustic and gravity waves, which were recorded both on the ground and from space. The shockwaves were so powerful that they circled the globe several times, as shown in particular by measurements from balloons flying at an altitude of 20 kilometres.1 Shockwaves this intense2 had not been observed since the eruption of Krakatoa in 1883, when they were detected by their effect on barometers.

About 140 megatonnes of water vapour were also released into the atmosphere at a speed of forty metres per second. In the stratosphere, the quantity of aerosols3 increased five-fold, while the mass of water rose by 13%. This is why, in a collaborative work led by Sergey Khaykin,4 a researcher at the LATMOS laboratory,5 the eruption of Hunga Tonga is described as the most remarkable climate event of the past three decades. Scientists from 17 laboratories, including five under the supervision of the CNRS,6 came together for this study, attesting to the huge worldwide interest generated by the volcano.
“Eruptions release gaseous sulfur into the atmosphere, which then condenses forming aerosols,” Khaykin explains. “The latter reflect solar radiation and, in sufficient quantities, can cool the global climate. The presence of large amounts of water, however, oxidises the sulfur, which resultingly gives rise to larger, heavier aerosols than if the event had taken place in the open air. This speeds up their descent, especially since the short duration of the explosion, which lasted only a few minutes, meant that less sulfur was emitted than during other such phenomena with a similar VEI.” 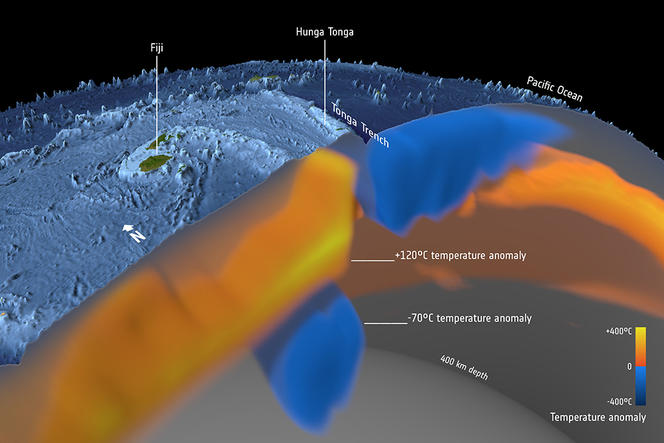 Illustration showing the tectonic forces around the Tonga Ocean Trench, where the edge of the Pacific Plate dives beneath the Australian Plate. 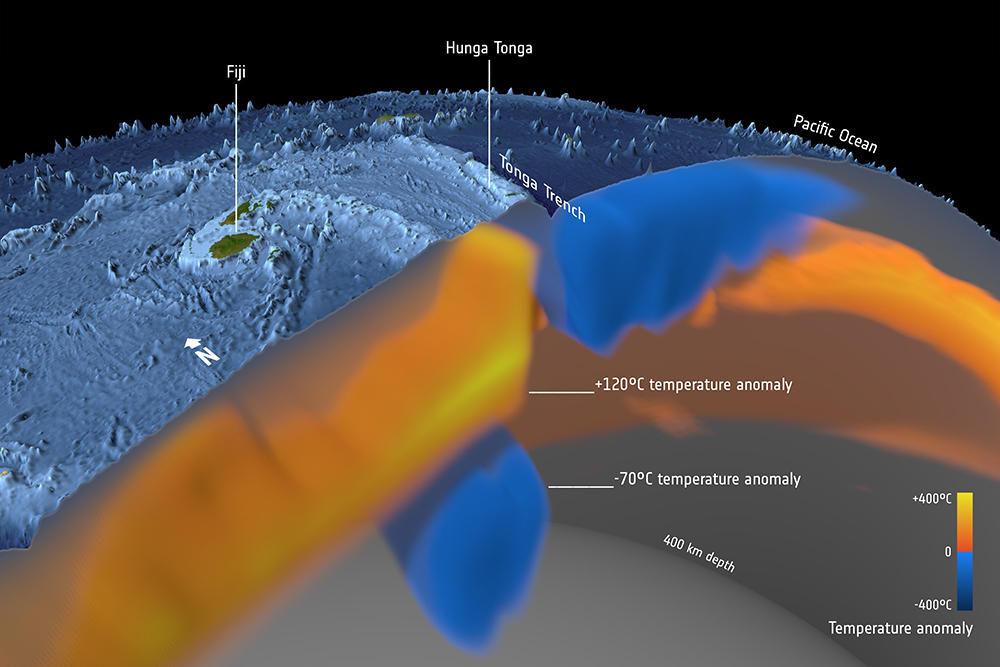 The eruption also released huge amounts of water vapour. This is expected to remain airborne for several years and, in addition to its greenhouse effect, could also alter global circulation and worsen polar ozone depletion. “Initial estimates7 indicate that warming caused by water vapour will significantly exceed cooling due to aerosols,” Khaykin points out. “However, the magnitude of this change remains to be determined.”

To monitor the situation, scientists combine information from some ten space missions, including satellites equipped with lidar (the laser equivalent of radar), and from numerous weather stations. Additional measurements are carried out using a clever application of GPS technology. The radiation emitted for location purposes is naturally deflected by the atmosphere, and a correction is then applied to obtain an accurate measurement. In the plume, the signal undergoes greater distortion, making it possible to trace changes in humidity induced by the eruption. “This system is particularly useful for carrying out soundings in areas where there are no weather stations,” says Bernard Legras, research professor at the LMD.8 “Some profiles showed that the atmospheric saturation humidity inside the eruption column was 3,000 times greater than normal.”

Evolution of the water vapour plume produced by the eruption of the volcano, from 17 January to 22 March 2022

These approaches have much in common with the study of the effects of large forest fires,9 which also release huge amounts of aerosols into the atmosphere, and are often investigated by the same researchers. “At a meeting on the climate impact of the megafires that struck Australia in 2019 and 2020, we were wondering when the next such extreme event would take place,” recalls Pasquale Sellitto, a senior lecturer at Paris-Est Créteil University and member of the LISA.10 “Hunga Tonga erupted the next day, blasting exceptional amounts of material into the atmosphere.” 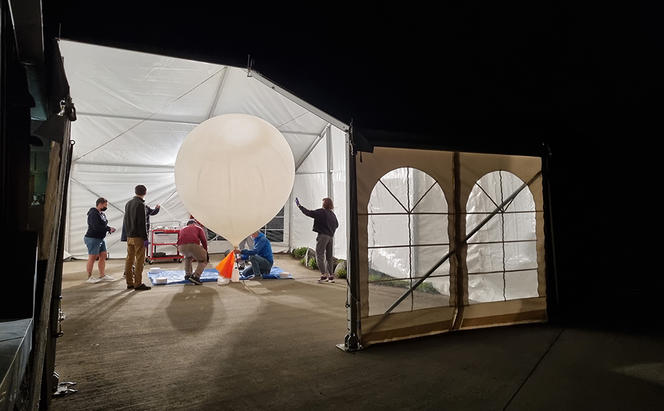 Inflating a balloon for one of the radiosondes on 21 January, 2022, Réunion Island. 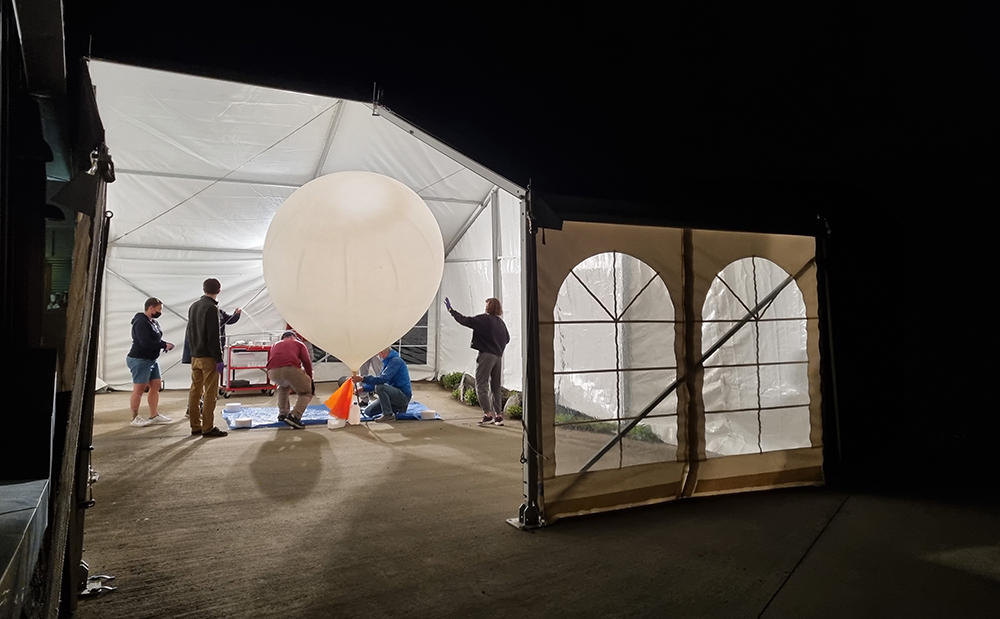 An action programme was immediately set up: balloons carrying measuring devices were released in the wake of the plume, while satellites, including the French-US Calipso spacecraft equipped with a lidar system, provided preliminary data thanks to their continuous automatic monitoring of the atmosphere. These initial observations enabled the researchers to estimate the direction of propagation of the volcanic plume and carry out a maximum number of soundings in its wake. The cloud headed for the Indian Ocean, where measuring facilities are scarce, but, as luck would have it, blew over Réunion Island, which has several lidar systems, a weather station and an astronomical observatory. Balloons were flown there and deployed in time for the arrival of the plume.11

“It was an exceptional eruption, similar to Krakatoa in 1883, and the largest atmospheric disturbance by water vapour ever observed,” Sellitto explains. “This is also the first time an eruption warms the global climate, a phenomenon that is all the more surprising given that you would expect just the opposite.” The eruption of Krakatoa led to a volcanic winter and lowered the mean global temperature by nearly half a degree, while 1816 is remembered as the “year without a summer”, following the eruption of Tambora, another Indonesian volcano.

However, much remains to be clarified concerning the climate impact of the Hunga Tonga eruption. “Although the water vapour released into the atmosphere has a global greenhouse effect, locally it tends to cool the stratosphere through infrared emission,” Legras explains. “This has slightly altered the circulation and photochemical equilibrium in the stratosphere. There may be local effects, such as more severe droughts in the Monsoon Zone, but these mechanisms are poorly understood. The impact on the ozone layer is not very clear either, especially since the aerosols emitted by the eruption interfere with measurements. We should be able to make more reliable observations in the spring, and then next winter.” 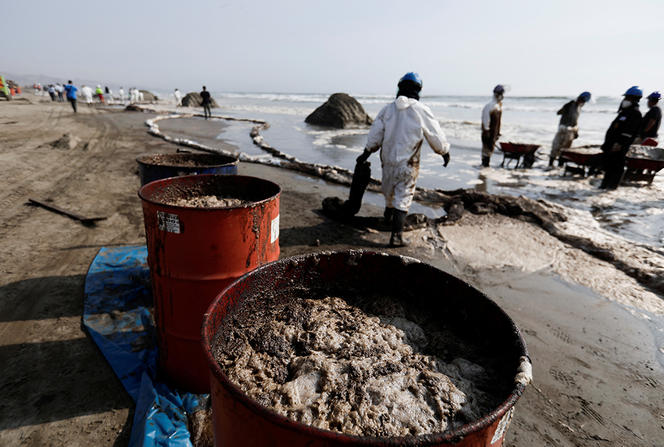 The tsunami that resulted from the eruption in Tonga caused an oil spill off Lima, Peru, over 9,000 km away. The swell destabilised a tanker unloading crude oil. 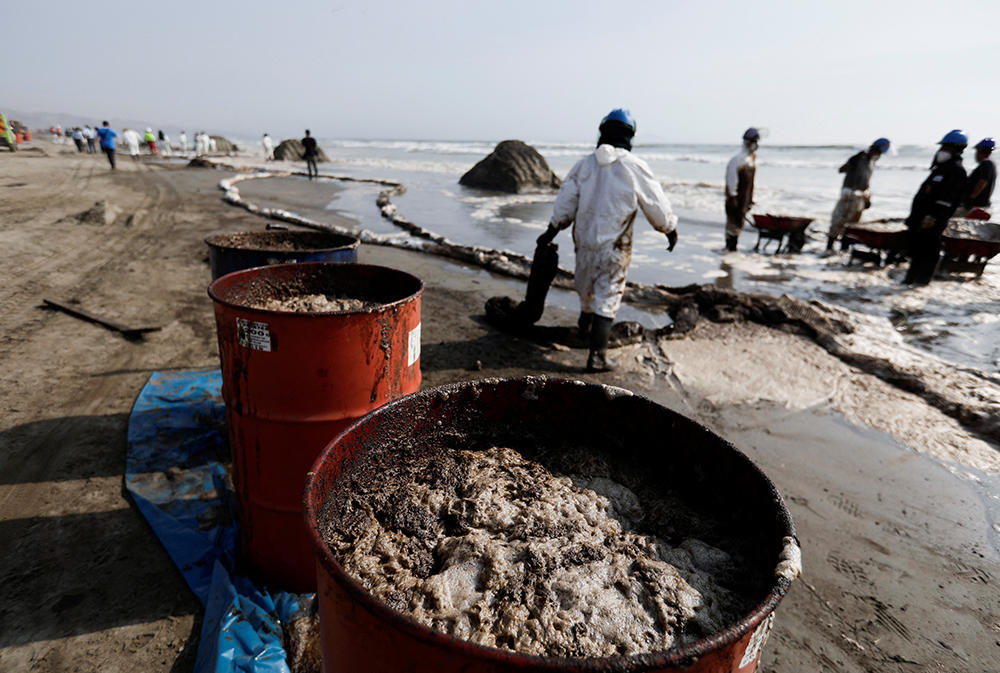 Although relatively recent, observations of the Pinatubo blast did not enjoy all the benefits of today's technology, especially satellites. It is therefore difficult to make comparisons, and there are still grey areas that can only be clarified by ongoing research. “However, it's worth pointing out that several of the satellites that helped us study the Hunga Tonga eruption will soon be decommissioned, some of them by the end of the year,” Legras laments. “Most of them are not expected to be replaced. We've enjoyed a golden age of space observation, but we're in danger of lacking resources if another major explosion occurs in the next few decades.”

However, events of this kind are of considerable scientific interest, and, with the progression of climate change, are likely to take on increased importance over the coming years. Geoengineering, in other words, artificial and deliberate manipulation of the climate, is seen by some as promising in the fight against global warming, or by others, on the contrary, as insane, with potentially worse repercussions than the problems it claims to solve. “By releasing unprecedented amounts of water vapour into the atmosphere, the Hunga Tonga eruption triggered a natural geoengineering experiment,” Sellitto says. “This will keep us busy for several years and give us a better grasp of the impact of such modifications.”

“The day will come when, confronted with the violent effects of climate change, we will seriously consider resorting to geoengineering,” Legras predicts. “Hunga Tonga provides us with the opportunity to determine what we can do and, above all, what we must absolutely avoid doing. Theoretically, adding sulfate aerosols to the atmosphere could cool the climate, but that’s not at all the same thing as removing greenhouse gases. The best way to offset their impact is to reduce emissions.”

Slideshow
Ten samples that have marked the history of chemistry
Geophysics

Article
A Mysterious Volcanic Eruption in the Middle Ages