Lines of force of the magnetic field in the Earth's core and outside (strongest are in yellow). The sphere (pink) marks the upper boundary of the liquid iron core, while the white sphere represents solid iron.
N. SCHAEFFER/ISTERRE
Share
Share
Taking a deep dive into our planet’s turbulent core 3000 kilometers below surface level, geophysicists have emerged with high-definition 3D simulations showing the hidden mechanisms that govern the Earth’s magnetic field.

Invisible but powerful, the magnetic field surrounding Earth is vital to life as we know it because it deflects the ravaging effects of solar wind—flows of charged particles from the Sun, which risk zapping away our atmosphere. But while this geomagnetic field stretches outward into space, it stems from mechanisms deep inside our planet, in the molten-metal outer core surrounding the solid-metal inner core at the very heart of Earth. At such inaccessible depths, the challenge for scientists has been to delve comprehensively into the various phenomena at work. A challenge taken up—and met—by four French geophysicists who, with the help of enhanced supercomputer capacities, have produced high-definition 3D simulations of the complex movements underlying the Earth’s magnetic field,1 thus launching a new stage in this field of study.

Take a journey to the center of the Earth—as far as its outer core, at least—and you’ll find a swirling mass of metal, mainly iron, kept in liquid form by the region’s intense heat. Temperature and pressure variations across this layer cause the melted metal to rise in hotter zones and to sink in cooler ones—convection movements that generate electric currents through the metal, and in turn, magnetic fields. Pair these convective motions with the Earth’s rotation on its axis and you have a large-scale dynamo effect: the spinning aligns the convective motions which now cooperate to produce one big magnetic field, ultimately creating the shield that blocks out solar wind.

To fine-tune their knowledge about this geodynamo process, scientists need to get to the core of the matter—or more precisely, the outer core and its workings. To do so, some have used lab experiments, by building models from liquid metals like sodium. But this approach, as Nathanaël Schaeffer of the ISTerre2 explains, is not altogether reliable: “It’s difficult to reproduce the Earth’s magnetic field in a lab. And liquid sodium is also extremely dangerous—it can trigger a blast when it comes into contact with water!” Alternatively, researchers have turned to computer-run numerical simulations, but these, too, have their limitations. “Today’s computers,” says the geophysicist, “don’t allow us to produce very accurate simulations of the Earth’s core. We have to settle for approximations.”

While simulations are also the basis of the method chosen by Schaeffer and his colleagues from the ISTerre and the IPGP,3 the team didn’t rely on just any computer. Indeed, the OCCIGEN supercomputer in Montpellier—placed at the scientists’ disposal by the GENCI4— allowed them to take calculations to a whole new level. “Our simulation used up to 16000 interconnected computer processors that simultaneously shared the mass of calculations. So it took under a year to calculate what would have taken 250 years by a single computer!” Impressive speed, further boosted by the intricate computer code perfected by Schaeffer. Using this heavy-duty supercomputer force, the geophysicists combined the fundamental equations of fluid mechanics with those of electromagnetics in a fast-rotating sphere representing the Earth’s core. From the vast amounts of data obtained, they then produced high-definition 3D simulations tracing the outer core’s convection movements, but also, strikingly, the turbulence that randomly shakes them up.

It took under a year to calculate what would have taken 250 years by a single computer!”

In this way, the team shed new light on various phenomena. Among them, a westward drift of the magnetic field, which scientists were already aware of, but which, Schaeffer indicates, “failed to spontaneously show up in earlier, less realistic simulations.”  Similarly, the team’s findings point to “giant tornadoes associated with strong magnetism near the poles, already inferred on the core’s surface from magnetic field observations.” But what the simulations now also reveal is that “these tornadoes extend downwards throughout the core’s body.” Otherwise, the new results also highlight the heterogeneity of the magnetic field. Schaeffer notes the presence of “zones where the magnetic field is particularly strong, as already expected. More unexpectedly however, the simulations show other zones where the field is almost negligible.”

Thanks to the team’s study, researchers have new references to go on for magnetic-field readings and forecasts, important for a range of fields. In space navigation and aeronautics for example, the magnetic field is exploited to “protect satellites and planes from solar wind that can damage electronic systems and cause them to malfunction.” Alternatively, deep-hole drilling for mining or other such purposes holds a “risk that drilling may deviate from the intended destination as GPS doesn’t work underground. The most economical method we have for guiding drilling tools uses magnetic field measurements.” Schaeffer also indicates that “compasses in smartphones are based on magnetic-field measurements” and require up-to-date readings. 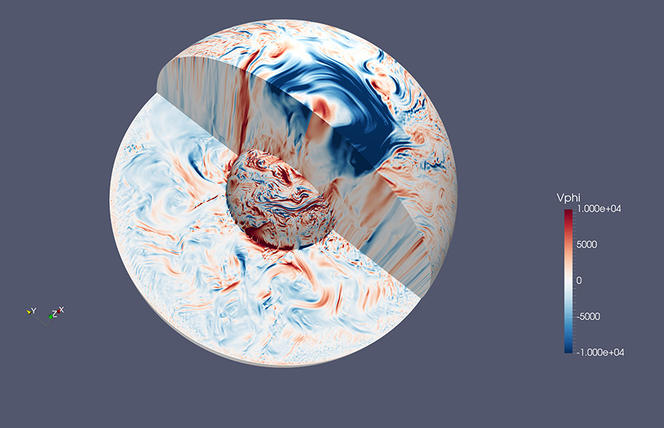 Speed ​​of liquid metal (red towards the East, blue to the West) in a high-resolution simulation of the Earth's core. The large blue area represents a tornado 1200 km in radius, located under the north pole. 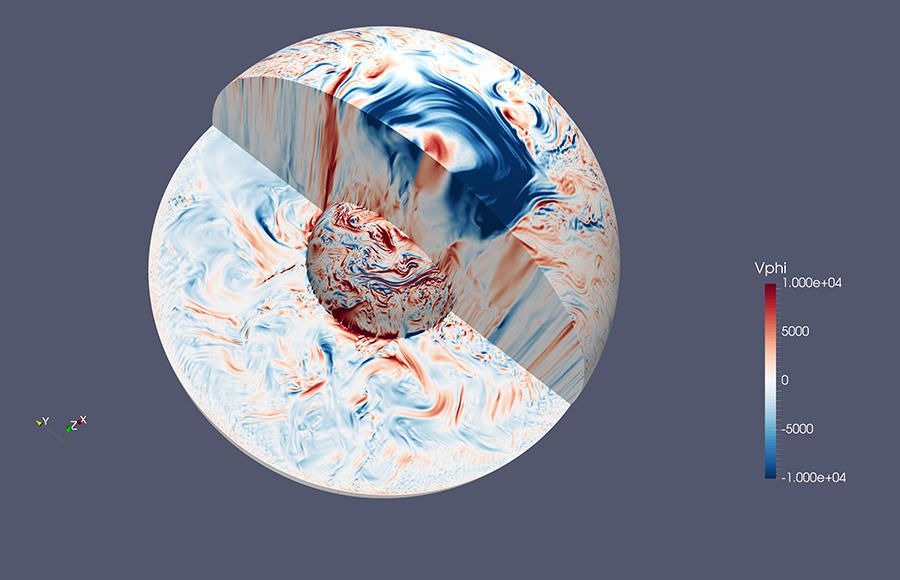 Building on their method, the French team now intends to turn their focus on other aspects of the Earth’s magnetic field. One particular goal is to probe the phenomenon of geomagnetic reversal: the intermittent switching of the Earth’s magnetic field so that magnetic north and south swap positions in relation to geographic north and south. The last reversal dates back 780,000 years, but “some people believe another inversion is due in the next hundred years or so.” According to Schaeffer, “our present knowledge about these reversals is underlined by contradictions. We’re missing an element to explain how they come about.” An area of doubt that the team aims to clear up.

But the geophysicists’ interests aren’t purely earthbound. “Rock samples picked up by the Apollo mission indicate that the moon once had a magnetic field. This came as a surprise as it’s been assumed that only a larger body with a core can generate a field. So how did this lunar magnetic field originate?”

Article
Global warming in France may be worse than thought
Geophysics

Slideshow
History Down the Drain