Pizza on show: a sculpture by Tom Friedman at the New York Contemporary Art Fair in March 2013.
FRED R. CONRAD/The New York Times-REDUX-REA
Share
Share
The art of the Neapolitan pizza maker, who twirls dough in the air, was included in the UNESCO Intangible Cultural Heritage list this year. A well-deserved recognition for a food item that has conquered the world without becoming standardized. The CNRS anthropologist Sylvie Sanchez looks at the history of the global spread of pizza, in the wake of Italian emigration.

It’s a fascinating slice of history! When Sylvie Sanchez, an anthropologist at the Institut Interdisciplinaire du Contemporain, decided to take on the challenge of retracing the history of pizza, she found herself immersed in “real detective work,” combing through archives, record books, personal experience accounts… Her goal: to understand how an iconic Italian food item conquered the world, becoming absorbed by other cultures. The results of her study, first published 10 years ago, were recently re-released.

When it comes to finding the earliest mentions of pizza, there’s not much to go on. The word appeared in the Neapolitan dialect in the 16th century, but at the time designated a dish consisting of unadorned baked dough, simply daubed with olive oil or lard and called “pizza bianca.” It wasn’t until the end of the next century and the adoption of the tomato, imported from South America, that the “pizza rossa” became the standard. And it didn’t venture beyond Italian borders until the second half of the 19th century, with the first wave of emigration…

From Italy to New York

To reconstruct the story of how it spread, Sanchez decided to follow the major migrational movements from the “Boot” towards two other countries: France and the US. “The history of pizza,” she says, “is the story of multiple trajectories of Italian migrants who left their homeland starting in the late 19th century.” Nearly 26 million Italians emigrated between 1850 and 1900. Retracing their paths, Sanchez identified three main destinations: southern France, and more specifically Provence, and the US, primarily New York and Chicago. 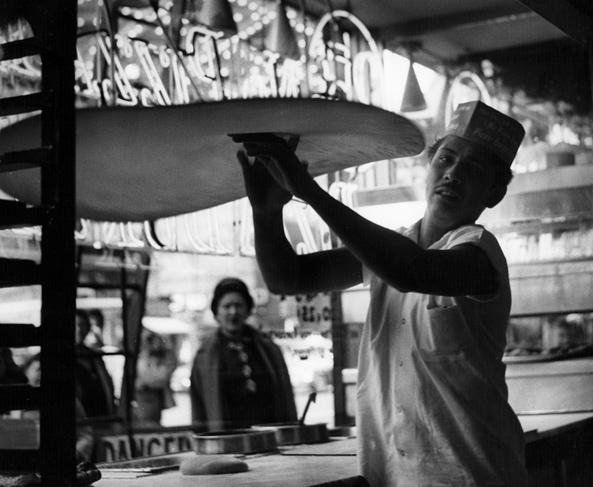 A pizza restaurant in New York in the 1950s. The US is today the world's largest pizza consumer. 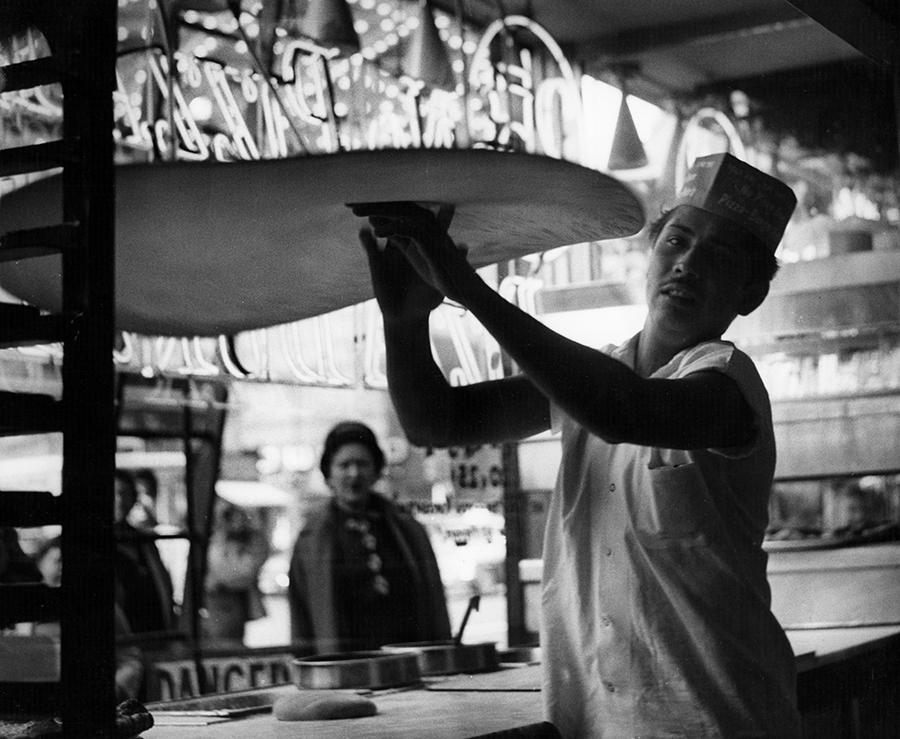 In the process, the researcher discovered the mechanisms behind the assimilation of this culinary creation. Much more than a simple food item, the Italians were exporting a part of their culture, and one that turned out to be widely popular. In both the US and France—respectively the world’s first and second largest pizza consumers at 13 kg and 10 kg per capita per year, far ahead of the Italians themselves, who “only” eat 5 kg annually—pizza became an integral part, not without a few deviations from the original recipe, of a whole Western lifestyle.

Yet the real boom in pizza consumption on a worldwide scale is more recent, dating from the 1960s. “Until then, it suffered from a stigma,” Sanchez reports. “A simple bread-like base covered with tomato or oil, it was considered a dish for poor people, especially back in Italy.” The Italian immigrants made it a symbol of their cultural identity in the melting pot of the US, while in France they transformed it into a regional speciality like so many others. A quick meal, fast and efficient, pizza became a part of the “American way of life”—so much so that the Americans even claimed to have originated the concept.

In fact, it was only when pizza seemed to be changing nationality that the Italians began to reclaim it—what Sanchez calls the “boomerang effect”: “When they saw how successful it had become across the Atlantic, the Italians started building up a historical memory of pizza. It was brandished as an emblem of Italian identity, like a knee-jerk reaction to American imperialism.” According to the Italians, Americans may make pizza, but they themselves make “verace pizza napoletana.” 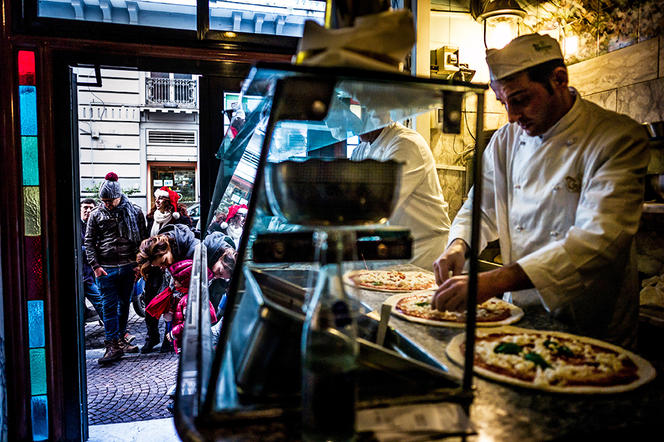 A family pizzeria in Naples. The word "pizza" appeared in the Neapolitan dialect in the 16th century, but then only referred to only a dough, simply brushed with fat. 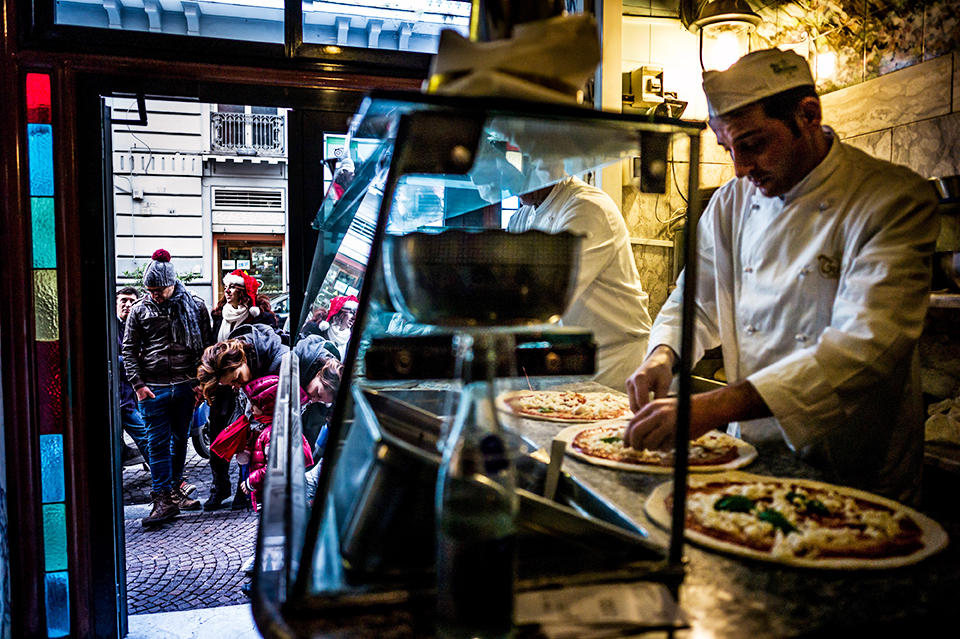 In 2008 Neapolitan pizza was granted the EU Traditional Specialty Guaranteed label: from its consistency to its color, from the rising of the dough to the wood fire cooking, pizza bearing this label—which should be eaten, according to the rule book, fresh from the oven—“has no inventors, no fathers, no masters, but is the fruit of the creativity of the Neapolitan people,” as a famous quote says. This was rectified in December 2017 by the inclusion of Neapolitan pizza "twirling"—or the art of the pizza maker—on the UNESCO Intangible Cultural Heritage list.

But the most astonishing part of the story, as Sylvie Sanchez emphasizes, is that “the dissemination of pizza throughout the US, France and the world was what saved it.” In her view as an anthropologist, cultural elements that remain rigid and resist change are the ones that disappear from society. “The globalization of pizza led to national and even regional adaptations,” she says, “due to a systematic and ongoing effort of differentiation.” In other words, exogenous borrowings, rather than representing the alignment of one people with the cultural practices of others, are often a source of new hybrid forms.

Pizza offers an apt illustration of the expression of cultural change, arising from a paradox: having originated in Italy, it found success outside of its native country. Its bread-dough base and varied toppings have allowed it to espouse all cultures without losing its identity, making it at once an exotic food, a recession-proof product, a street snack and a meal to be shared. Not bad for a simple disc of dough.

Article
Feminicide: naming the crime in order to fight it
Anthropology