Oxytocin, from love potion to medicine

Oxytocin, from love potion to medicine

Oxytocin is involved in early attachment between mother and infant.
IMAGE SOURCE / BSIP
Share
Share
Oxytocin appears to be involved in several types of attachment, including love. Marcel Hibert explains its chemical and biological mechanisms and the therapeutic hopes it inspires, notably in the treatment of autism.

You have been studying oxytocin and its role in behavioural disorders for more than twenty years. You tell this story in Ocytocine mon amour which was published in September 2021. What led you to focus on this hormone, which was long qualified as the ‘love molecule’?
Marcel Hibert:1 Chemists and biologists have always studied the molecular mechanisms of life, death and disease…. so why not those of love? I have been asking myself the question ever since 1997, without having an entry point from which to start. However, that year, before taking up my post at the Laboratory for Therapeutic Innovation (LIT) in Strasbourg (northeastern France), I had attended a conference in Montreal (Canada) on the pituitary hormones. Thomas Insel, an American pharmacologist, presented his study on small rodents, or voles, amongst which two populations could be distinguished in terms of their habitats and behaviours. Prairie voles are monogamous and particularly caring of their offspring, while their mountain cousins are polygamous and show little inclination for parenthood. 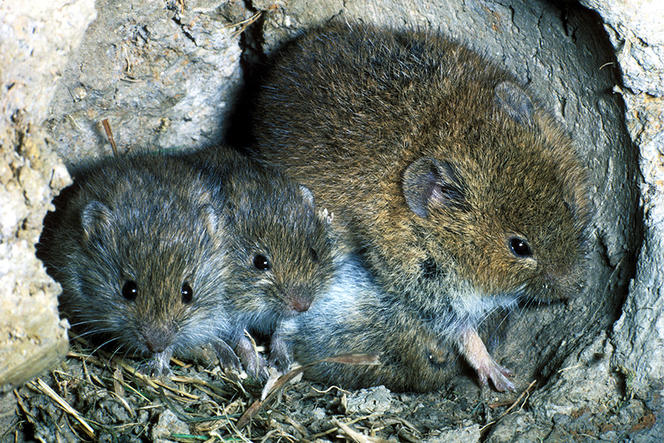 Family of common voles (Microtus arvalis) in their burrow. 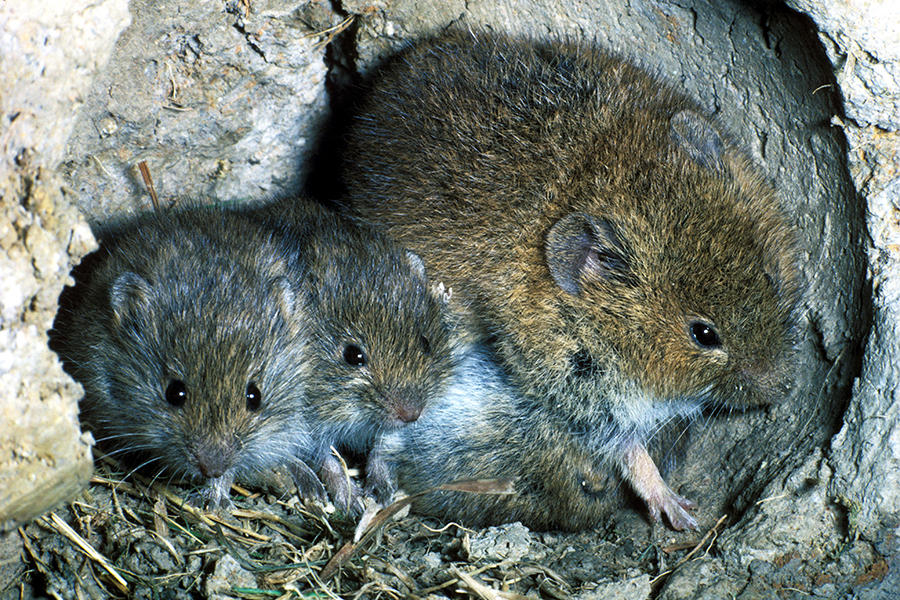 How could this difference in behaviour be explained? Insel and his team found it was due to oxytocin and vasopressin,2 two neurohormones previously known for their roles in delivery and urination, respectively. Injecting oxytocin into the brains of mountain voles reversed these animals’ behaviour: they became less fickle and more caring towards their offspring. By contrast, common voles in which oxytocin receptors had been blocked became polygamous, less concerned about their progeny and less sociable. Based on these two molecules, I finally had a lead to follow in order to study the molecular mechanisms of love.

Oxytocin, vasopressin: what distinguishes these two hormones?
M. H.: Secreted at the same site in the brain, these two neurohormones are in fact cousins. From the 1960s, oxytocin3 was mostly recognised for triggering birth, while vasopressin was known for its antidiuretic activity. During the past twenty years, their crucial roles in different types of attachment have been revealed. Their functions are sometimes similar, sometimes complementary, but there are probably gender-specific features: the formation of a couple is generally under the control of oxytocin in females, and influenced by vasopressin in males.

So is oxytocin really the love hormone?
M. H.: No, affirming that would be an inappropriate shortcut. Oxytocin has been present in animals with sexual reproduction for millions of years. In my opinion, evolution selected it to associate pleasure with all the functions necessary for the survival of the species. Synthesised by the brain, this hormone is produced in the hypothalamus and then sent to the pituitary gland. By passing through the bloodstream, it spreads continually throughout the body, with peaks of production during birth4 or lactation. However, the influence of oxytocin extends much further. We now know that it protects neonates from pain and hypoxia lack of oxygen; Ed. during delivery, and participates in the construction of their microbiota. During the early days of life, it enables newborns to decipher primary emotions in expressions and faces and to create emotional bonds with those surrounding them. 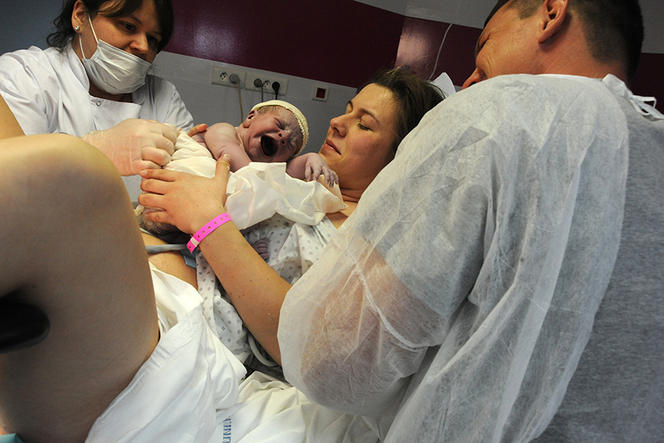 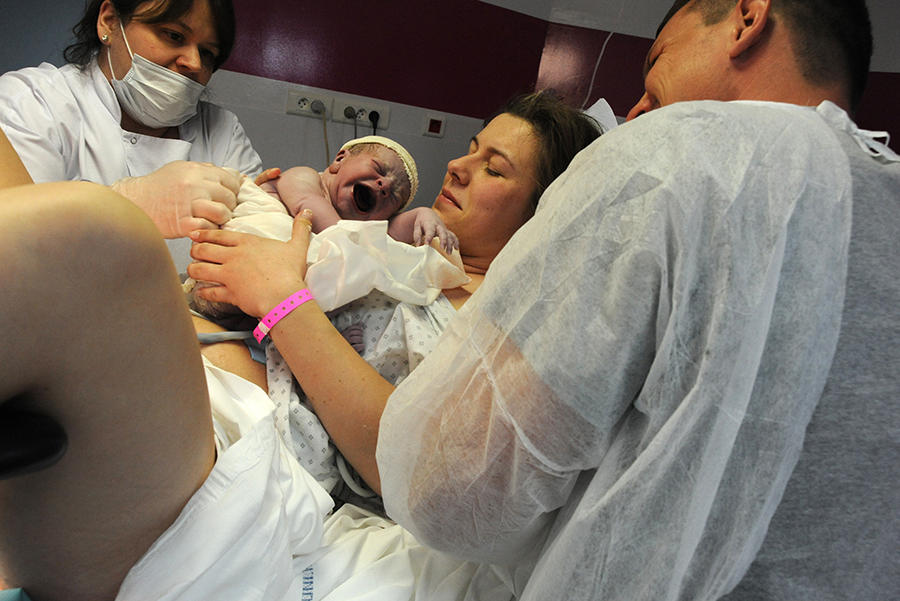 More generally, oxytocin subsequently participates in the construction and reinforcement of specific links and social interactions. It modulates altruism, empathy, friendship and trust in others, as well as the mechanisms underpinning love. Clearly, other elements may be determinant, such as genetic predispositions, personal history, environment, education, chance or necessity. Considerable attention should be paid to any extrapolations: a nasal spray of oxytocin will not procure success in either life or love. It is useless to administer it without reason or control. Yet this nasal spray has been available for several years.

What makes it so difficult to use oxytocin for new therapeutic treatments?
M. H.: In some countries, the nasal spray is administered as a medication to facilitate the ejection of breast milk. It is widely used during exploratory studies conducted in humans. Indeed, it is the only way to ensure that a little oxytocin reaches the brain, but the doses delivered cannot be controlled and the drug is degraded within a few minutes. The oral route is also excluded because the molecule is too large to cross the gastrointestinal barrier. When given intravenously or intramuscularly, its activity is limited because it is metabolised very rapidly. One final point is that oxytocin can no longer be patented and its development to treat social interaction disorders would not be profitable. The challenge for the chemist is therefore to imagine a new patentable and stable molecule that can penetrate the brain following oral administration so that it will mimic oxytocin and assure effective treatment for the pathology being targeted.

We started this project by implementing a variety of strategies: classic relationships between structure and activity, screening of the Chimiothèque Nationale, rational design based on three-dimensional models of oxytocin in its receptor, etc. In some ways, all these approaches reached successful conclusions as they enabled us to discover molecules that bound strongly to the receptor, although these ligands proved to be antagonistic, which means they blocked the function instead of activating it. Our colleagues showed that in the case of oxytocin, the receptor was particularly well protected by acting as a dimer. In other words, it was necessary for two hormones to bind simultaneously to two adjacent receptors to trigger the cellular response anticipated. Nature had indeed done a good job in thus preventing any unexpected activation. After twenty years of research, we finally managed to overcome this obstacle and identified a synthetic molecule, called LIT-001, which acts in the same way as oxytocin. This was the first one that could restore social interaction in an animal model of autism5 following peripheral administration. Other, more potent and specific molecules have since been discovered and will soon be patented; at best, their preclinical and clinical development potential will require eight to ten years of industrial investment.

Which other pathologies might benefit from treatment with your oxytocin mimic?
M. H.: Treating the primary symptoms of disorders in the autistic spectrum remains our priority. These notably concern persistent deficiencies in communication and social interactions, as well as the restricted and repetitive nature of behaviours, interests or activities. No medication is currently available to improve the neuronal development of children and their integration into social groups. The oxytocin nasal spray has nevertheless produced some encouraging results: it reduces stereotypies, favours direct eye contact or the perception of emotions and the deciphering of social interactions. Our molecule should have similar effects.

Another hope resides in the treatment of post-partum depression, which affects between 10% and 15% of women. It has been shown that oxytocin, which is already present during pregnancy and is produced in greater quantities during skin to skin contact with the infant, reduces the gravity and duration of depressive episodes. This hormone could thus be used to treat pain, help with withdrawal from drugs, be used in certain types of schizophrenia, social and post-traumatic anxiety, anorexia and bulimia, or even heartache, etc. Meanwhile, we should emphasise that love is not reducible to a hormone, a gene or a need to ensure survival of the species. If there is no pathology, no medicine is necessary. Through exchanged glances, touching, kisses, orgasms and our social interactions, let’s give free rein to the oxytocin we have in us.

See author's bio
Sea monsters at the time of the dinosaursPrevious
Covid-19: What have we learned from the pandemic?Next