Detecting Covid-19 on the breath

Detecting Covid-19 on the breath

A member of the medical staff at La Croix-Rousse hospital in Lyon blowing into the sample tube of the Vocus mass spectrometer.
Matthieu RIVA/IRCELYON
Share
Share
A new method, as quick and simple as a breathalyser, was recently tested to detect Covid-19 via the molecules present in exhaled air. Beyond the current pandemic, this could open new avenues for the detection of respiratory pathologies.

In early June, a mysterious device appeared in the hospital wards dedicated to patients infected with Covid-19 at La Croix-Rousse hospital in Lyon (central eastern France). A grey box the size of a refrigerator, the instrument is equipped with a touchscreen and a long flexible tube ending in a removable mouthpiece. Over the course of a few weeks, researchers from the IRCELYON1 moved the heavy contraption from room to room, and invited those patients willing and able to blow into the sample tube. Despite overexertion and fatigue, some members of the medical staff also agreed to give their breath for science.

They were all driven by one hope, that of obtaining an immediate, non-invasive, and accurate detection method for the disease – one based on identifying the chemical compounds present in exhaled air. The device is actually a state-of-the-art mass spectrometer that can recognise and quantify the gas molecules present in a sample of air. The technological jewel of the Swiss manufacturer Tofwerk, the sensitivity and resolving power of the Vocus PTR-TOF are unrivalled the world over. "We are the first to have access to this instrument, thanks to the support of the Auvergne Rhône-Alpes region, the European Regional Development Fund (ERDF), and the French government," enthuses IRCELYON researcher Matthieu Riva.

The project is based on the following biological facts: the air that we exhale contains thousands of molecules produced by our metabolism, in a composition that varies according to our state of health., During an infection however, our cells are controlled by the virus and produce viral proteins, to the detriment of most of their normal activities. As a result, the particles that an infected individual expels from their lungs can differ from those of a healthy subject. Identifying the volatile compounds typical of Covid-19 – a "signature" of sorts – would enable the development of a breath test to screen for the illness.

Identifying the "signature" of Covid-19

Researchers thus chose to analyse the air exhaled by a large sample group at La Croix-Rousse hospital. In an effort to successfully complete this project, atmospheric chemists from IRCELYON joined forces with virus specialists from the International Center for Infectiology Research (CIRI)2 as well as chemometrics specialists at the Analytical Sciences Institute (ISA).3 They also received the support of physicians from the infectiology and intensive care units at La Croix-Rousse. "This unusual collaboration proved highly enriching," stresses Christian Georges, deputy director of IRCELYON. 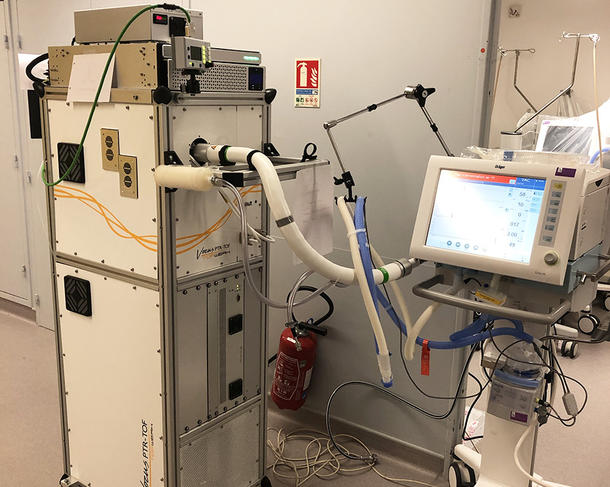 The researchers hope that this imposing device, which was tested at La Croix-Rousse hospital in Lyon for the detection of Covid-19, can eventually be available in a simple and compact format with a red and green indicator light. 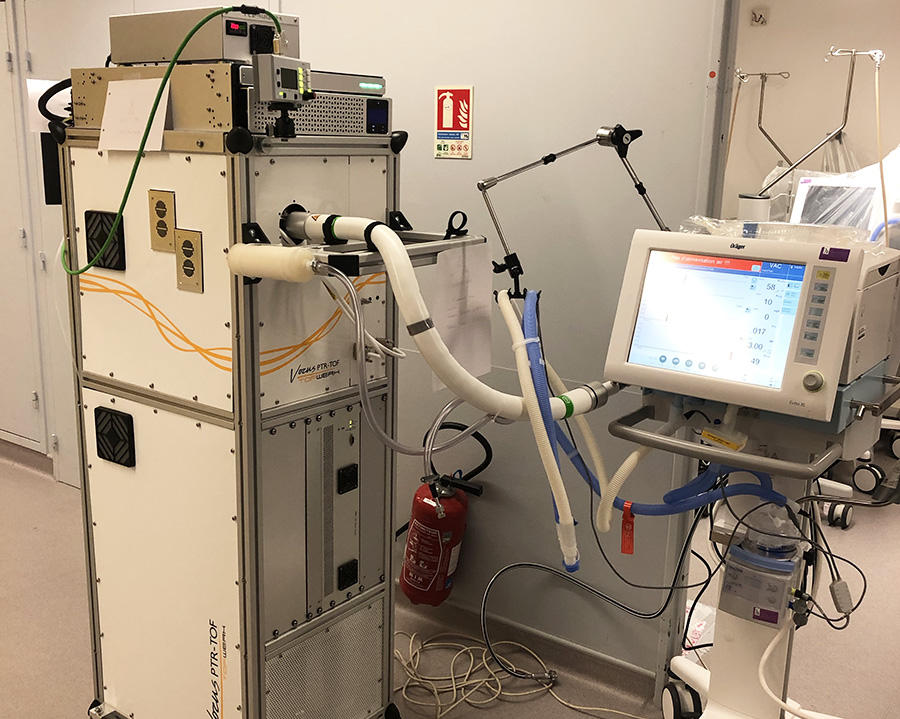 The data collected at the hospital is undergoing rigorous mathematical analysis to identify the potential molecular biomarkers of Covid-19. "We will probably obtain the initial trends in late July or at the end of the summer," says Riva. These will then have to be confirmed using new samples from patients and healthy individuals.

The idea of detecting the physiological state of a person via the air they exhale is hardly new: in 1954 the breathalyser thus enabled the analysis of blood alcohol levels. Since then, researchers across the globe have tried to develop diagnostic methods using breath analysis, but all of them have come across the same obstacle: the volatile molecules that could serve as markers for a disease have always been present in concentrations that are far too low. Worse still, as a humid and hot environment, exhaled air does not lend itself to measurement, and challenges the reliability of the results. The approach is promising on paper, but in practice its applications have been a long time coming.

Things are changing with this new generation of mass spectrometers. "Eight years ago we bought the best instrument on the market. And yet the one we are using today is a thousand times more sensitive," points out IRCELYON research engineer Sébastien Perrier. "What we are doing now was unthinkable just two or three years ago," adds Georges.  These tools have opened the way for a new research field in environmental science known as infinite dilution. Trace-level molecules, even when taken in environments as complex as exhaled air, can now be identified and quantified. "A doctor at La Croix-Rousse drank orange juice ten hours before breathing into the device – and we were able to detect it!," Georges recalls. Terpenes, which are characteristic of citrus fruit, did not escape the instrument. 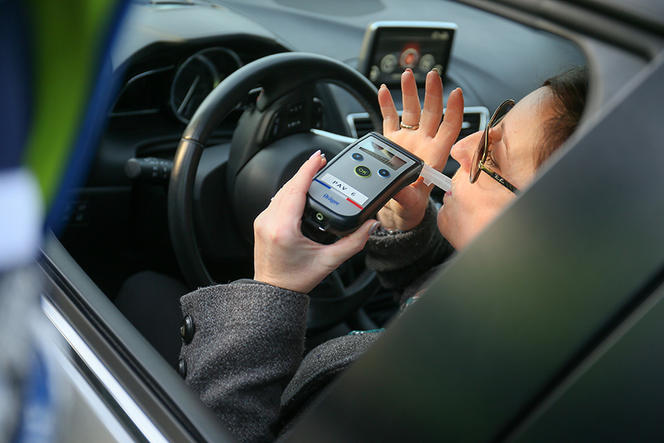 Since the breathalyser was invented in 1954 to measure alcohol levels in exhaled air, researchers have tried to develop diagnostic methods using breath. 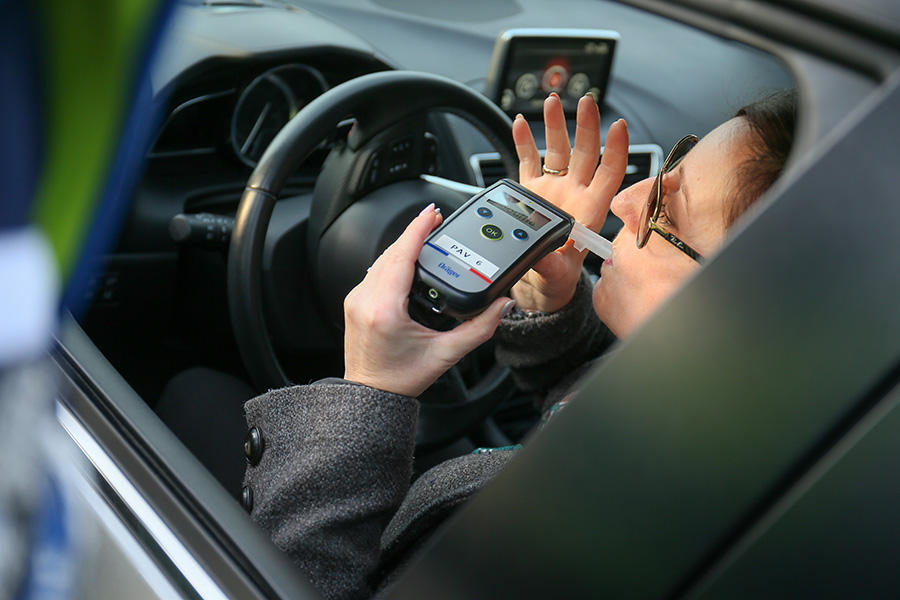 Medicine is one of the fields that should benefit first and foremost from this small technological revolution. At least that is what the researchers in Lyon want to demonstrate. If Covid-19 biomarkers are clearly and reliably identified when their research is completed, similar mass spectrometers could be deployed in hospitals. "The instrument could be equipped with data analysis software dedicated to this disease, something very simple with a red or green indicator light, for instance," Riva suggests. It would only take a few minutes to decide whether to advise someone to confine themselves for fourteen days or not.

The volatile molecules specific to Covid-19 may also provide invaluable information on the metabolic modifications induced by the new coronavirus. In addition, the device could be part of patient monitoring, and inform doctors of the effect of treatments. In the longer term, researchers hope to transpose the concept to other ailments such as Legionnaires' disease and cancer, thereby breathing new life into the field of medical diagnosis.