Of Wolves, Deer and Men

Of Wolves, Deer and Men

Grey wolf (Canis lupus) in the understorey in spring, Minnesota, North America.
Sylvain Cordier / Biosphoto
Share
Share
Wolves are increasingly singled out for their impact on livestock. In a recent study however, three researchers advocate a more balanced view, and emphasise that these mammals also have beneficial effects, for instance by controlling deer populations.

At a time when biodiversity on our planet is under threat, the return of wolves to North America and Europe, and in particular to France, should be cause for celebration. And yet the media, as well as public opinion, are more concerned about deaths among livestock: “The negative effects caused by the presence of wolves, such as the number of sheep killed, are visible and easily evidenced. Of course, there are positive repercussions, but they are often indirect and therefore difficult to demonstrate,” says Jean-Louis Martin,1 co-author with Simon Chamaillé-Jammes2 and Donald M. Waller3 of a new synthesis4 on the problems raised by cohabitation between deer, wolves and humans. The summary is based on their own work and on the latest available research. In their study, the researchers emphasise the need to take a wider view in order to have a better grasp of the whole range of issues raised by such coexistence.

Increasing numbers of wolves and deer

There are now more than 12,000 wolves in western Europe. Contrary to popular belief, they were not reintroduced into France. Although they had disappeared from our country by the early twentieth century, several nuclei remained in other parts of the continent. The individuals now found in France are descended from the Italian population. “The return of wolves is a natural process and results from the legal protection they enjoy through the Bern Convention of 1979, and above all from the spectacular increase in the numbers of their prey, red deer and roe deer,” Martin explains. For over the same period, deer populations, which had previously been in decline, expanded considerably. Although this was a real success as regards conservation, it also brought about its share of less desirable effects. 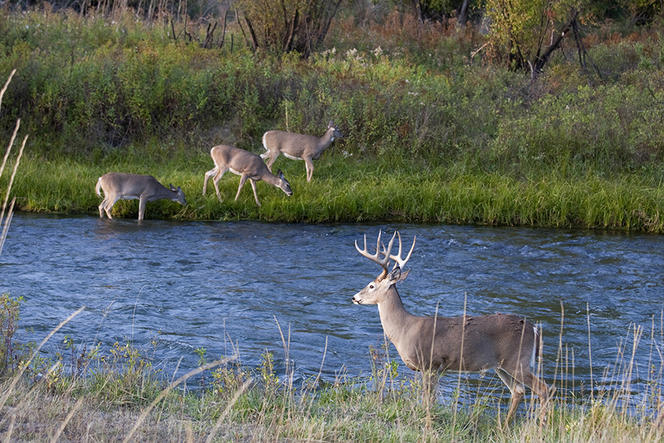 White-tailed deer in Montana, US. The species has expanded rapidly in North America since the second half of the twentieth century. 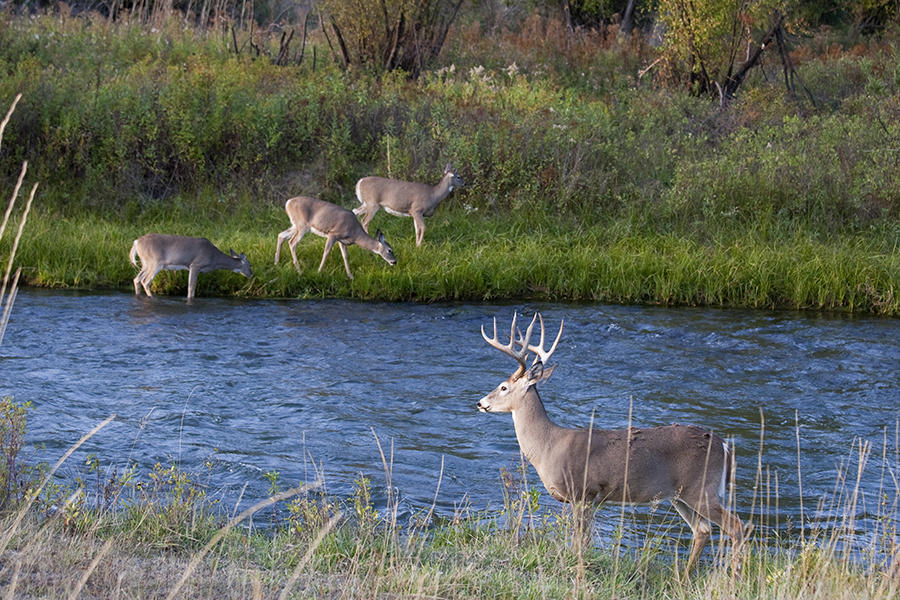 For instance, the high number of deer in forests prevents the regeneration of young trees and leads to soil compaction. In France, it is estimated that damage by these ruminants to agriculture amounted to approximately €20 million in 2004. In addition, despite little media coverage, there are also consequences on human lives. Every year in Germany, 200,000 deer collide with road vehicles, causing 50 deaths and 3,000 injuries, with overall repair costs in Europe estimated to exceed €1 billion. High concentrations of deer are also thought to facilitate the spread of tick-borne diseases such as Lyme, although this remains controversial.

High deer densities in forests also affect the rest of the biodiversity. “In studies we carried out in Canada, we showed that the absence of deer predators wipes out 90% of the undergrowth.” This reduction in understorey vegetation results in the disappearance or severe depletion of many invertebrates, including pollinating insects. Vertebrate communities are also affected, especially ground- and canopy-nesting birds, most of which depend on invertebrates for food.

The decline in biodiversity caused by a lack of predators can be explained by the top-down trophic control hypothesis (also known as the green world hypothesis), which states that the control exercised by predators – in this case, wolves – is necessary for the maintenance of a high level of plant and animal diversity. The idea is that predation pressure from carnivores forces herbivores to invest time and energy in dealing with predation risk, a phenomenon known as “fear ecology”. The time devoted to escaping is at the expense of that spent feeding, and causes these ruminants to select their food in such a way as to store the greatest amount of energy in the shortest possible time.

By forcing their prey to concentrate on the most nourishing plants and on the areas least favourable to predators, the presence of wolves is thus believed to minimise the impact of herbivores on the amount and diversity of vegetation. “If you take the predator out of the system, you remove something that plays an essential role in shaping life as we know it,” Martin explains. Research clearly shows that the mere presence of carnivores has a non-lethal cost for their prey population that may exceed the lethal cost, in other words, the number of animals killed.

Issues that require a comprehensive approach

The aim of the study is not to demonise deer, but rather to take a more balanced view of the effects – whether positive or negative – of the presence of wolves. The general public, as well as policy-makers, hardly ever consider the ways in which these animals might help humans and natural ecosystems by mitigating the agricultural, social and ecological impact of high-density deer populations. In addition, wildlife observation and the return of wolves can bring about economic benefits. In Yellowstone National Park, in the northwestern United States, it boosted visitor attendance by around 4%, pumping $35 million into the local economy. Of course, it is also true that the costs incurred by the presence of these carnivores are far from negligible. In France, both breeders and the Government are forced to dedicate increasing financial resources, time and effort to the defence of livestock herds from attack by wolves. 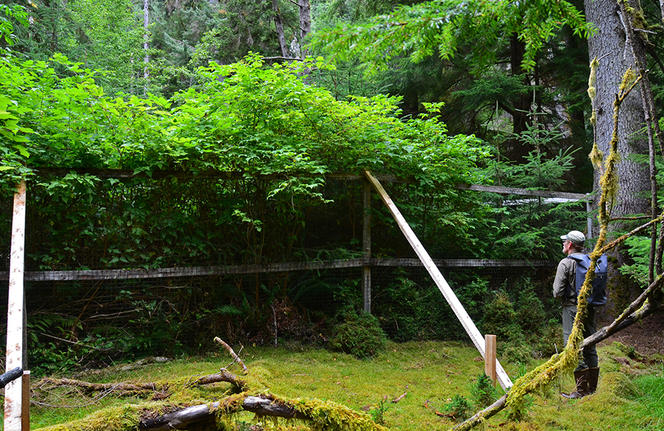 Example of restoration of vegetation after 13 years of deer exclusion in an area of high deer abundance on Kunga Island in the Haida Gwaii Archipelago, off the coast of Canada. 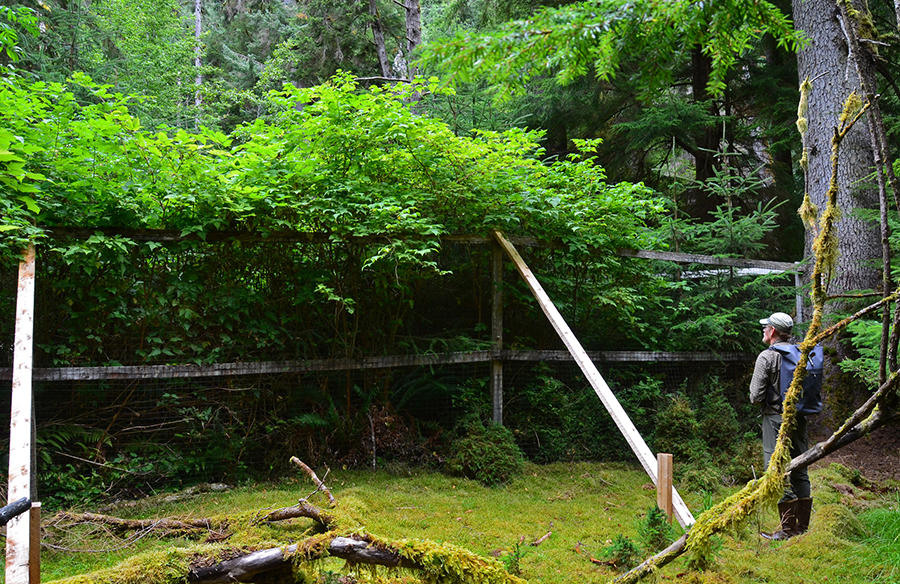 Example of restoration of vegetation after 13 years of deer exclusion in an area of high deer abundance on Kunga Island in the Haida Gwaii Archipelago, off the coast of Canada.
JL MARTIN
JL MARTIN
Share
Share

Researchers believe that shifting from conflict to coexistence will require an impartial assessment of the direct and indirect effects of these species’ presence. This review of the latest available knowledge of the complexity of interactions between humans, wolves and deer aims to give food for thought to the stakeholders involved, with the hope that the future of deer and wolf populations will be seen to be compatible with human interests. “We are part of a complex social and economic system. The challenge is to succeed in setting up a modus operandi that takes this complexity into account so that we can restore our coexistence with these species,” Martin concludes.

Article
Rethinking the Origin of Dogs