Artist's rendering of the Juno spacecraft in orbit around Jupiter .
NASA/JPL-CALTECH
Share
Share
More than 20 years after Galileo, it is now Juno's turn to observe the largest planet of our Solar System. This close encounter will go beyond the simple observation of its moons to gather precious information about Jupiter's mysterious interior and deep atmosphere.

On July 4, after a journey of nearly five years, the Juno spacecraft will be placed into orbit around Jupiter. One of the main goals of the mission, expected to last 18 months, is to shed light on the interior of the Solar System's biggest planet, which has remained inaccessible to observation until now. Juno will in particular map Jupiter's gravitational and magnetic fields in order to determine its internal structure. The orbiter's instruments will also measure radiometric emission from the planet's deep atmosphere with the aim of understanding its composition, thermal structure and ionized environment.

34 revolutions for the mission

The data collected by Juno should not only improve researchers' knowledge about Jupiter but also, more importantly, provide them with new evidence about the conditions that prevailed in the early Solar System during the formation of the giant planet. For despite all the information gathered by earlier missions, its structure and origin remain poorly understood. "We don't know whether Jupiter has a central core or not," says mission co-investigator Tristan Guillot, CNRS Bronze Medal laureate, senior researcher at the JL Lagrange Laboratory and at the Côte d'Azur Observatory. "Juno will better constrain our hypotheses about the structure and internal dynamics of Jupiter by taking measurements a hundred times more precise than those we have today."

Unlike the Galileo mission, which studied the entire Jupiter system, Juno and its nine instruments will focus almost exclusively on the planet's internal structure and magnetosphere. In July 2016, the spacecraft will go into orbit around the gas giant. Its first two revolutions will last around 54 days. Then, in October, the spacecraft will be placed into an orbit that successively skims both poles, taking 14 days to perform a revolution. Since Jupiter completes one rotation in a little under 10 hours, Juno will fly over different regions in each orbit, covering the entire planet once it completes the 34 revolutions planned for the mission.

"More than the on-board instruments, it is the choice of a polar orbit that makes this mission exceptional," emphasizes Philippe Zarka, senior researcher at LESIA and Juno co-investigator, "not only because Juno will scan the entire surface of the planet, but also because, between each flight over the poles, it will pass beneath the radiation belts that extend either side of the equator, along Jupiter's magnetic field lines." It is indeed this intense radiation, which will gradually deteriorate the spacecraft's electronic instruments despite their shielding, that limits the lifetime of the mission to one year. "Never will a spacecraft have flown so close to Jupiter, a mere 10,000 km above the poles, 5,000 km above the equator," Zarka points out. "If the planet was the size of a basketball, Juno would be less than a centimeter away!" 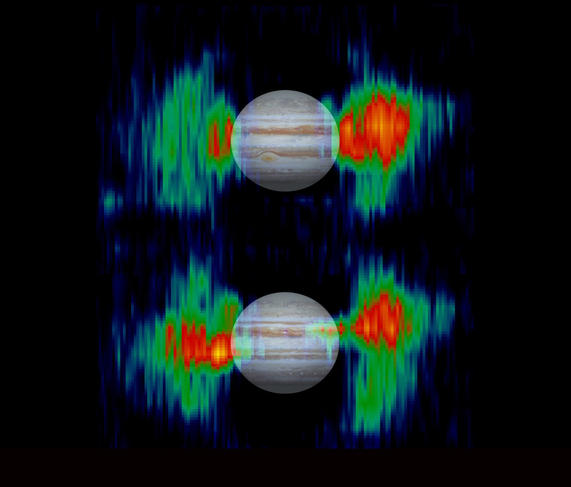 Representation of the Jovian radiation belts created using measurements made by the Cassini probe. 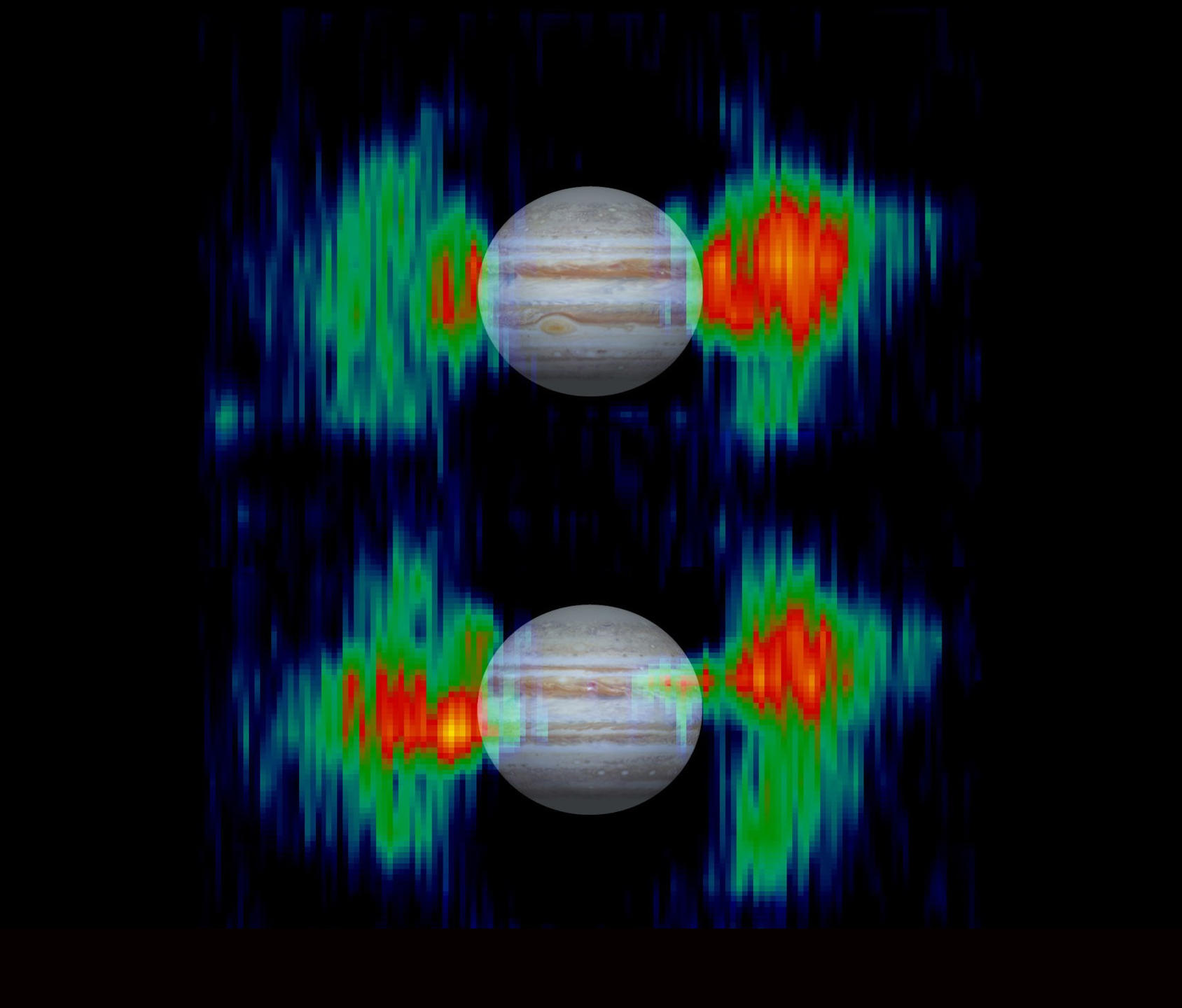 Representation of the Jovian radiation belts created using measurements made by the Cassini probe.
NASA/JPL
NASA/JPL
Share
Share
Never will a spacecraft have flown so close to Jupiter, just 5000 km above the equator.

Since researchers only have fragmentary data about the interior of Jupiter, they have so far been forced to speculate about what might be found beneath the outermost layers of the atmosphere. It is thought that the pressure and temperature increase nearer to the core, and that the medium, initially gaseous and composed of molecular hydrogen and helium, becomes liquid. When the pressure exceeds a million times the atmospheric pressure on Earth, the hydrogen molecules break down and form metallic hydrogen.

"We believe that it is in this liquid metallic hydrogen, which accounts for 80% of Jupiter's radius and conducts electricity, that electric currents generate the planet's powerful magnetic field," explains Guillot, in charge, within the Juno mission, of computing models of Jupiter's internal structure based on measurements of its gravitational field. As for the core, neither its composition nor its state (solid or liquid) is known, but it is thought not to exceed 15 Earth masses.

"The images and data in our possession show that circulation in the upper atmosphere is highly complex, with air mass movements that vary according to latitude, causing the well-known colored bands that give Jupiter its characteristic appearance," Guillot explains. "But we don't know whether the structure of the zonal winds comes inside the planet or whether these are superficial processes." By precisely mapping variations in Jupiter's gravitational and magnetic fields, Juno should be able to provide further information about the internal mass distribution of the planet. 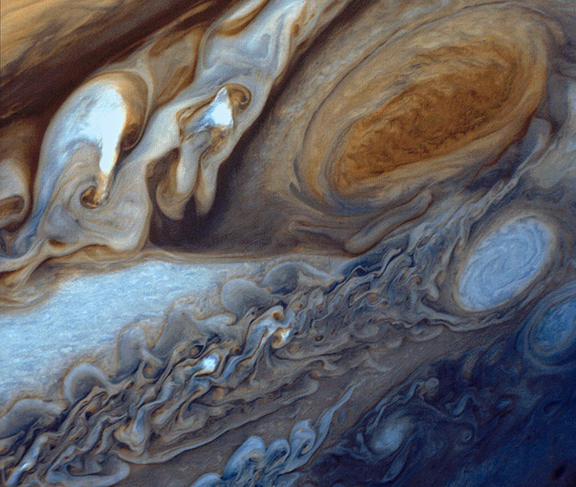 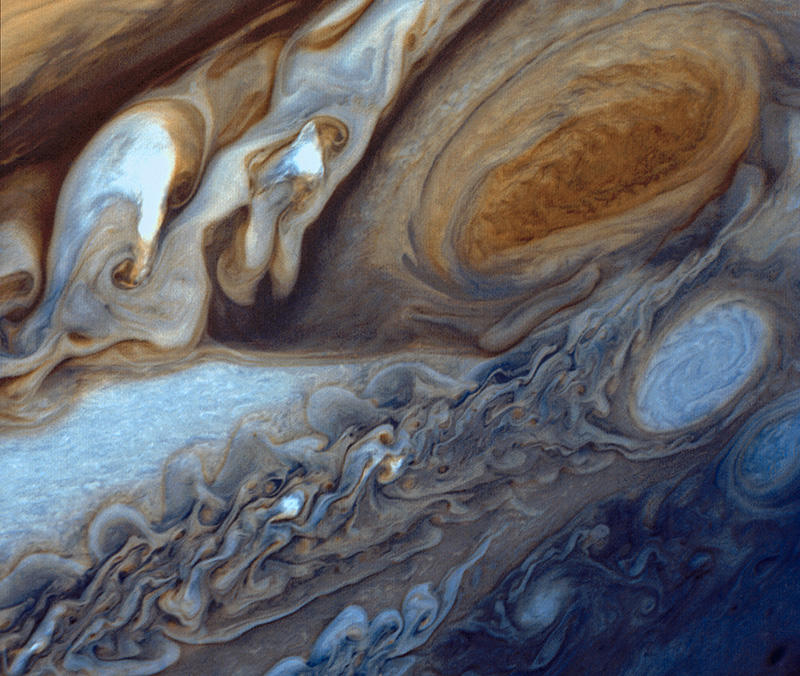 Jupiter's Great Red Spot, up close. This image was created using pictures taken by the Voyager 1 space probe.
NASA/JPL
NASA/JPL
Share
Share
Juno will enable us to reduce uncertainty about the  quantity of heavy elements.

Although it is known that Jupiter has 318 times the mass of the Earth and that it is composed of around 90% hydrogen and helium, plus 10% heavy elements (such as oxygen, carbon, etc), it has not yet been possible to establish the precise proportions of such elements nor the planet's water content. "According to hypotheses, the total mass of heavy elements in Jupiter varies from 10 to 40 Earth masses," Guillot says. "The microwave radiometer on board Juno, which can measure the presence of water down to the deeper layers of the atmosphere, will enable us to reduce uncertainty about the total quantity of water, and therefore of heavy elements, present in Jupiter. This value is a key parameter in models of solar system formation."

Such models assume that the 'primitive core' of the gas giant was originally formed by the agglomeration of blocks of water ice that existed in abundance in the protosolar nebula surrounding the early Sun. It is thought that this core grew rapidly to 10 Earth masses, at which point its gravity was sufficient to allow the accretion of the surrounding hydrogen and helium.

More than 20 years after the Galileo mission began, the astronomy and planetary science community is hoping that Juno will provide them with a wealth of data and enable them to refine their models of Jupiter's structure, and, more generally, of the formation of the Solar System.

Related topics:
Europe Heads to Mars
Closing in on Planet 9
The Ninth Planet

See author's bio
Bringing the Ancient Port of Rome Back to Life Previous
Should Driverless Cars also Be Borderless?Next