The new photodynamic therapy system developed at Lille University Hospital Center to treat glioblastoma consists in a balloon that is inserted into the surgical cavity during the procedure in order to achieve optimum diffusion of the laser.
Inserm/Dupont, Clément/Vermandel, Maximilien
Share
Share
By targeting cancer cells with a laser, photodynamic therapy—which is used in both dermatology and oncology—can provide new opportunities to treat certain tumors such as those that affect the prostate or brain. Introduced in France in the 1980s, this rapidly developing technique represents fresh hope for the treatment of often-inoperable pathologies.

By the end of October 2017 at Lille University Hospital Center, in northern France, five patients with glioblastoma—an incurable brain tumor—had benefited from a new treatment with photodynamic therapy (PDT). This technique can selectively and locally target isolated cancer cells using a light-sensitive compound.

How does PDT work? "Three elements are in play: light, photosensitizers (drugs in ointment form or injected intravenously) and the oxygen that is naturally present in the body," explains Céline Frochot, senior researcher at the Laboratoire Réactions et Génie des Procédés.1 "It is the combination of these three elements that creates a photochemical reaction. The light is emitted by an LED lamp, a laser, textile, or fiber optics when the lesions requiring treatment are internal. This light reacts with and excites the photoactivatable compounds, as well as the oxygen, which becomes toxic in response. This oxidative stress then destroys the affected cells."

Indeed, the cancer cells have too many receptors on their membrane and are unable to eliminate the photosensitizing agent that binds to them. “If these photosensitizing compounds are applied in excess, the cancer cells will also retain them in excessive quantities: the differential between normal and tumor cells becomes very important. PDT only destroys tumor cells and preserves healthy ones," explains the biophysicist Serge Mordon, Director of the INSERM unit "Thérapies interventionnelles assistées par l’image et la stimulation." 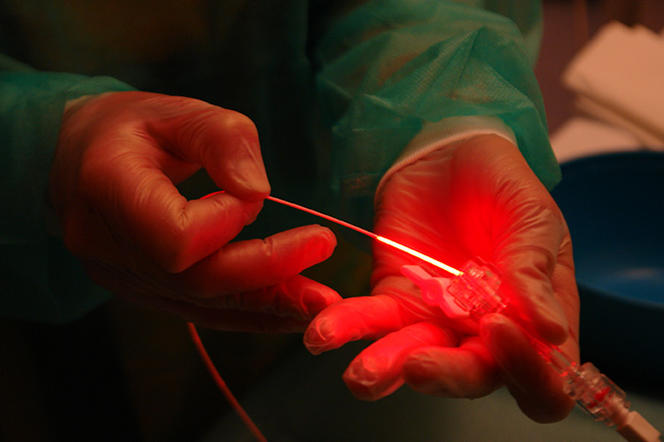 For photodynamic therapy, a photosensitizing agent is administered into the cells to be treated, and is then activated by a specific laser light that enables their destruction. 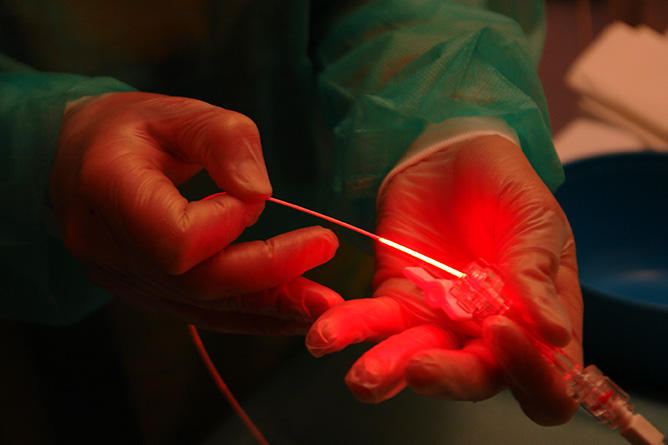 Photodynamic therapy is widely used in the field of dermatology to treat damage caused by the sun such as actinic keratosis.

The advantage of PDT is that it can treat both visible and microscopic lesions that are not yet apparent.

"This is the most common reason for dermatology consultation: such skin lesions affect nearly 3.5 million people in France, especially elderly and bald men. Actinic keratosis is a precancerous lesion but can evolve towards epidermoid carcinoma, so it needs to be treated," stresses Mordon. "The advantage of PDT is that it can treat both visible and microscopic lesions that are not yet apparent." Much less painful than surgery, PDT leaves no scarring.

The scientist and his team have also developed a new system called Phos-Istos, a flexible light-emitting textile which, following the application of a cream over the area requiring treatment, reduces the strength of the illumination while enabling a longer period of exposure, in order to reduce the adverse effects of light. At present, only two photosensitizing agents are available in France for use with PDT. "But we are currently working on the development of new compounds that interact even more efficiently with light so as to better target the damaged cells," Frochot says. "The aim is to combine basic research with a clinical protocol. Multidisciplinarity is crucial to improving this new therapeutic approach." 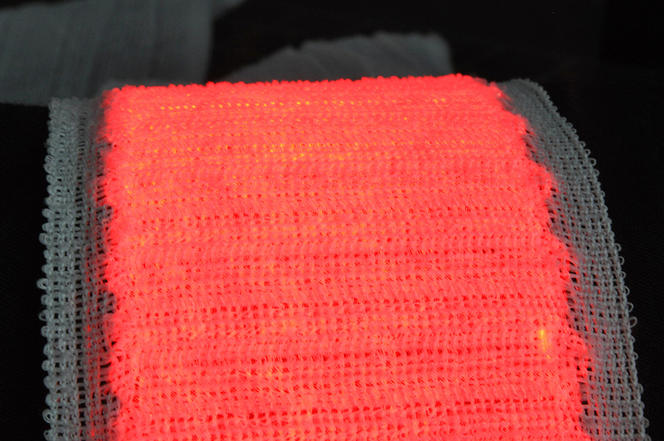 In dermatology, fiber optic textile systems such as this are used to treat lesions using photodynamic therapy. 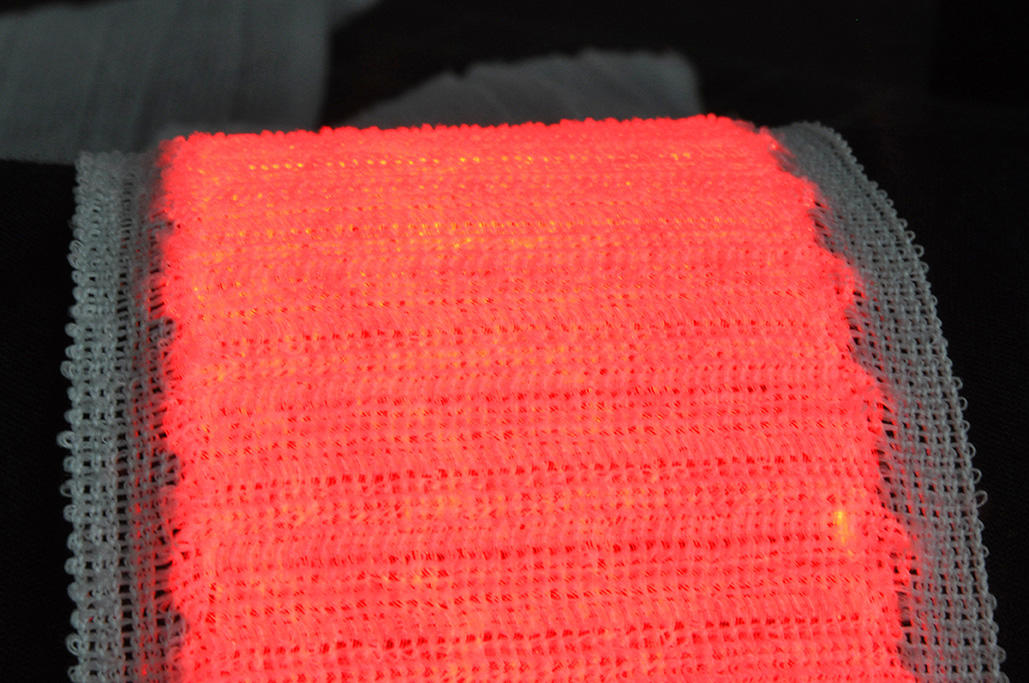 A therapeutic alternative for prostate cancer

PDT is currently under study for slowly evolving cancers with good survival rates, such as prostate malignancy. "This is the most common type of tumor in men over the age of 50 in industrialized countries. Until now, prostate cancer was systematically treated by surgical procedure. However, in 30% to 40% of cases, prostatectomy can cause urinary and sexual disorders, and there is a risk of unnecessary surgery."

During a clinical trial carried out in 2014 and 2015, PDT was evaluated using a new photosensitizing agent developed by a French company. In a cohort of 413 patients diagnosed at an early stage, 207 remained under active surveillance and an MRI scan was performed every 4-6 months to monitor the evolution of their lesions. The other 206 patients were treated with PDT. After one year of follow-up, 14% of the patients under active surveillance had a negative biopsy, versus 49% of those treated with photodynamic therapy. "With 70,000 new cases of prostate cancer each year, it is difficult to ensure regular monitoring with MRI scans. PDT therefore represents a real therapeutic alternative." It can also treat highly invasive tumors where median survival rateFermertime period in which half of the patients died does not exceed a few months, such as mesothelioma (caused by exposure to asbestos) or glioblastoma.

A global first for glioblastoma

This extremely aggressive brain tumor has been the subject of a world-first at Lille University Hospital Center, where since May 2017 five patients have been participating in a clinical trial that includes photodynamic therapy. 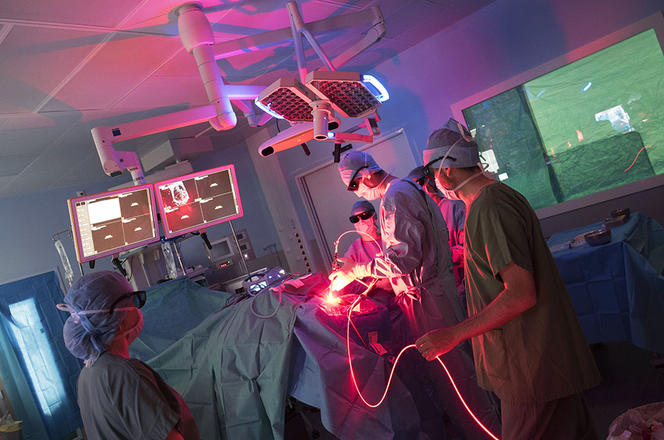 In the context of its clinical trial, Lille University Hospital Center has already operated on five patients with glioblastoma, an incurable brain tumor, using the photodynamic therapy system. 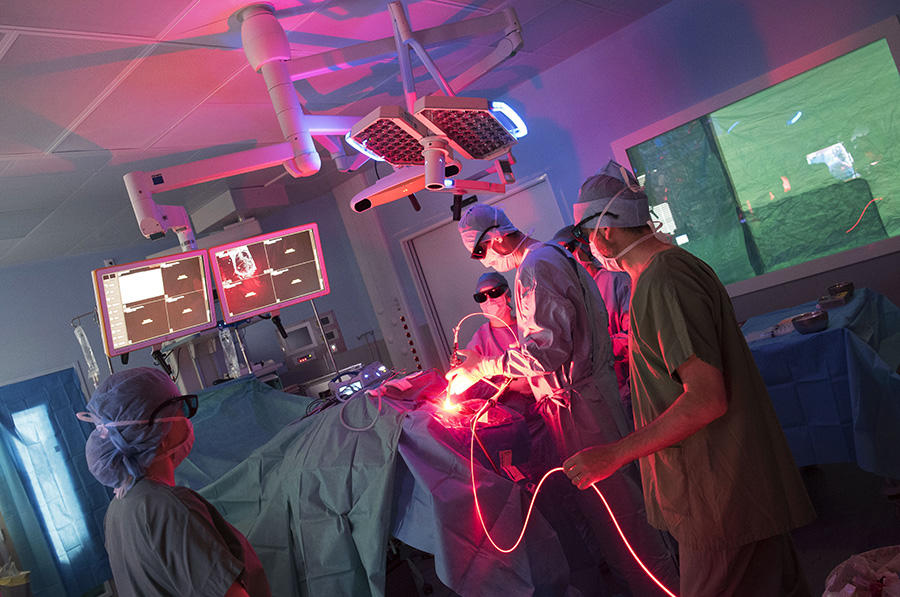 The prognosis is poor for these patients: median survival is less than 15 months. Glioblastoma is an infiltrative tumor that doubles in volume every month. And despite its ablation, recurrences are common, because some affected cells cannot be removed surgically. According to Mordon, this new therapy should be included in the standard care pathway, alongside the usual therapeutic arsenal of surgery, chemotherapy and radiotherapy.

"A few hours before surgery, the patient receives an injection of a photosensitizing compound that spreads throughout the body and binds to cancerous cells. Using a blue light source, the neurosurgeon can detect the tumor more easily and a maximum of cells can be excised without causing neurological lesions. An MRI scan makes it possible to visualize what remains of the tumor. We then intervene, illuminating it with the right light, at the right dose and in the right place." Five illuminations lasting around fifteen minutes with a balloon inserted inside the cranial cavity thus reveal the operating field with a homogeneous red light, at a wavelength that penetrates deeply into the tissues.  In few months’ time,2 the clinicians and researchers will therefore be able to evaluate the efficacy of photodynamic therapy in the treatment of glioblastoma.

Article
Seeing in the Dark?

Article
Exercise is Good for You, it's a Fact