Home / Articles / Investigating one of the cradles of humankind

Investigating one of the cradles of humankind

Home / Articles / Investigating one of the cradles of humankind

Investigating one of the cradles of humankind

View of the Brad Pit site (dated to around 3.5 to 3.7 million years ago) at Bolt's Farm, when excavations ended in May 2019.
IRL Homen & MPFSA
Share
Share
The fossiliferous site of Bolt's Farm, in South Africa, spans millions of years of history, including episodes of climate change that impacted early hominids and their environment. To study it, researchers from the country’s National Research Foundation have teamed up with colleagues from the CNRS in the HOMEN project.

Although humankind is definitely thought to have originated in Africa, such a vast, diverse continent cannot be treated as a single entity. “When it comes to the origin and evolution of ancient humans, the first place you think of is East Africa: Ethiopia, Kenya, Tanzania, etc,” says Dominique Gommery, senior researcher at the Paris-based Centre for Research on Palaeontology.1  “However, the other hot spot in this field is South Africa, where the reference specimen of Australopithecus africanus, the Taung Child, was discovered in 1924.”

In 2019, following many years of cooperation in various guises, palaeoanthropologists, palaeontologists and geologists joined forces and set up the HOMEN project.2 This partnership between the CNRS and the National Research Foundation of South Africa (NRF) operates as an International Research Laboratory (IRL).3 Gommery and Nonhlanhla Vilakazi, a researcher at the University of Johannesburg's Palaeo-Research Institute, are the two counterparts of the team, which is focusing on a section of the Highveld plateau known as the ‘Cradle of Humankind’. The two scientists   have also recently been distinguished with a Tremplin Award for bilateral cooperation in research –  Africa, by the French Ministry of Higher Education, Research and Innovation. 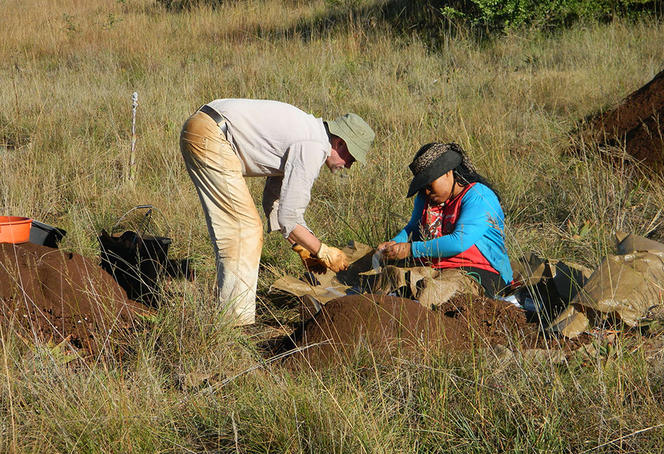 Dominique Gommery and Nonhlanhla Vilakazi excavating the Brad Pit site at Bolt's Farm, in 2018. They are both laureates of the Tremplin Award for bilateral cooperation in research – Africa. 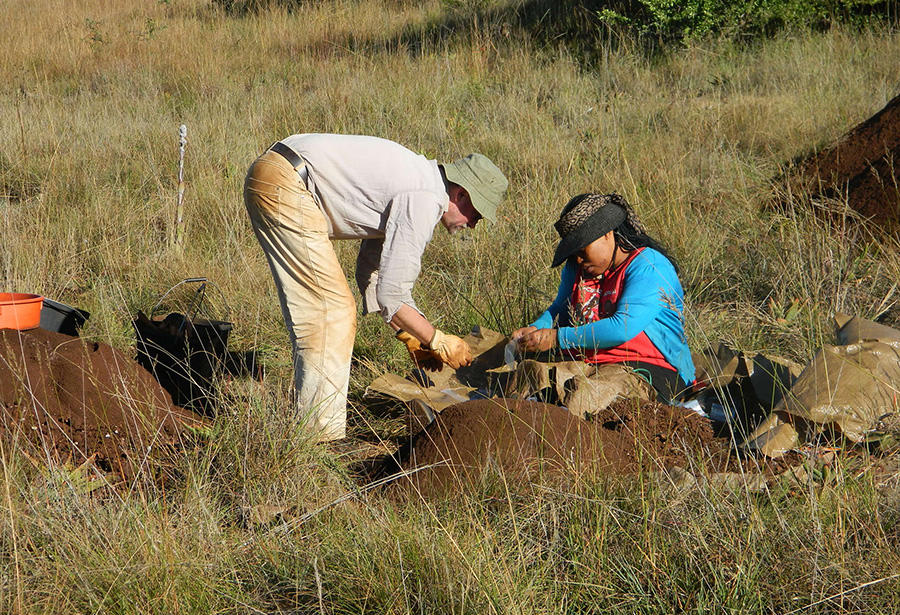 Dominique Gommery and Nonhlanhla Vilakazi excavating the Brad Pit site at Bolt's Farm, in 2018. They are both laureates of the Tremplin Award for bilateral cooperation in research – Africa.
IRL Homen & MPFSA
IRL Homen & MPFSA
Share
Share

Declared a World Heritage Site by UNESCO in 1999 and located in a valley less than a hundred kilometres from Pretoria and Johannesburg, the spot is characterised by the presence of many karst sites, i.e. geological features such as caves and fissures, where carbonate-rich rocks have undergone severe weathering. “We have already found remains of Australopithecus africanus there, also known as ‘gracile australopithecines’ and a close relative of the species to which Lucy belonged, as well as of Paranthropus, also known as ‘robust australopithecines’,” Gommery explains. “Other remains of our own genus, Homo, reveal the rich diversity of humans in the region over the course of time.”

The scope of the HOMEN project spans most of the Plio-Pleistocene, covering a period extending from five million to 800,000 years ago. The Pliocene (5.3 – 2.6 million years ago) saw the emergence of the first Australopithecines, while the Pleistocene (2.6 million – 12 000 years ago), marked by major glaciations, was the last geological epoch before the Holocene, in which we currently live.

These periods witnessed a host of environmental changes that affected ancient hominids, and it is precisely the impact of the environment on prehistoric biodiversity that lies at the heart of HOMEN. To shed more light on this, researchers can draw on a remarkable source of information.

At Bolt's Farm, which extends over several properties, erosion has revealed a whole series of fossil deposits. “Bolt's Farm is like a megacity with several different suburbs for archaeologists to explore,” Gommery explains. “Robert Broom, who was a central figure in South African palaeontology, was the first to discover remains in the area in 1936, and we are still excavating there, with the support of the French Ministry for Europe and Foreign Affairs' Excavations Commission.”
However, this rich heritage was seriously damaged in the nineteenth and early twentieth centuries by gold mining in the area. Fortunately, the site was declared protected when its scientific importance was recognised. The loss was nonetheless acutely felt since Bolt's Farm stands out not only by the quantity of fossils it contains, but also by its geographical location. 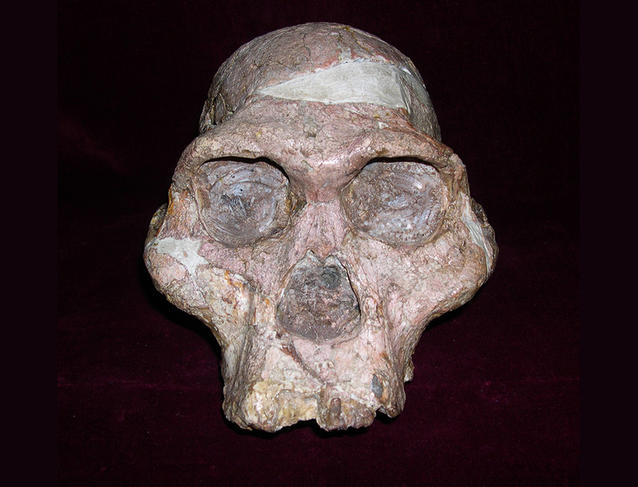 Skull of Mrs (or possibly Mr) Ples (Australopithecus africanus) discovered in 1947 by R. Broom and J.T. Robinson at the Sterkfontein site a little over 2 km from Bolt's Farm (Collection of the Plio-Pleistocene Palaeontology section, Ditsong National Museum of Natural History). 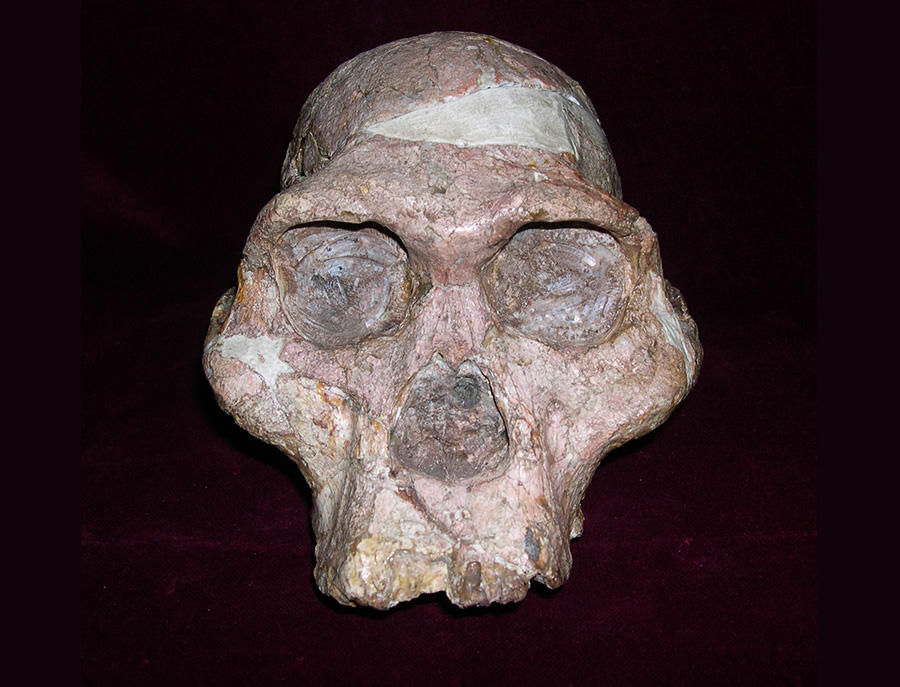 Climate change and shifts in biodiversity

Whereas East Africa lies on the Equator, the Highveld Plateau, at an altitude of some 1 500 metres, is located much further south. This means that the region has been more strongly impacted by climate change, and in particular by cooling episodes originating in Antarctica. Such conditions led to various shifts in biodiversity over thousands of years. Some species migrated to warmer climes, while others stayed put and either evolved or became extinct.

“There were also exchanges with Eurasia,” Gommery points out. “One species of pig found at Bolt's Farm is descended from a type that was found in France several million years ago, and we can also see that carnivores that travelled long distances frequently crossed the region. Changes in biodiversity in South Africa during the Plio-Pleistocene help us reconstruct the environment of the time, and we're trying to understand why we find different kinds of ancestors of present-day species, including humans.”

Fortunately, the deposits at Bolt's Farm span a long period. Although the time sequence is not complete, it nonetheless provides evidence from a significant portion of the historical record that the HOMEN project researchers are trying to piece together. It also helps to situate other sites in the region, whose fossils originate from shorter periods. The abundance of palaeontological remains is mainly due to the action of predators such as big cats and owls, which carried their prey into caves or regurgitated their pellets there. In addition, some animals accidentally fell into cracks. “Large prey were the most mobile, and provide us with a fairly broad picture of the regional environment,” Gommery explains. “Small species like rodents moved around less and give us an indication of more localised ecological niches, enabling us to fine-tune our reconstructions.” 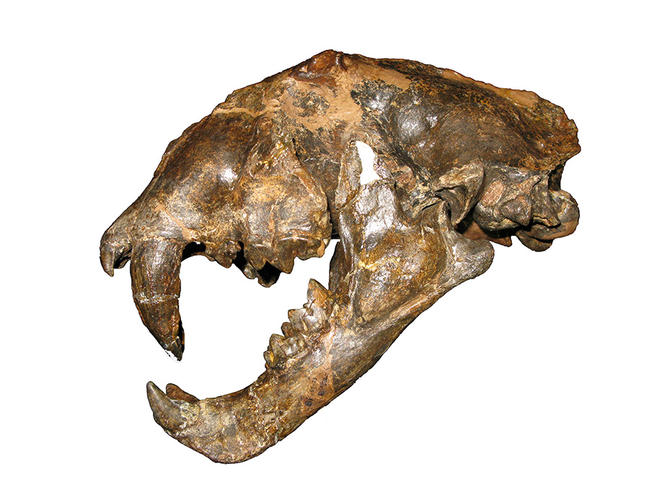 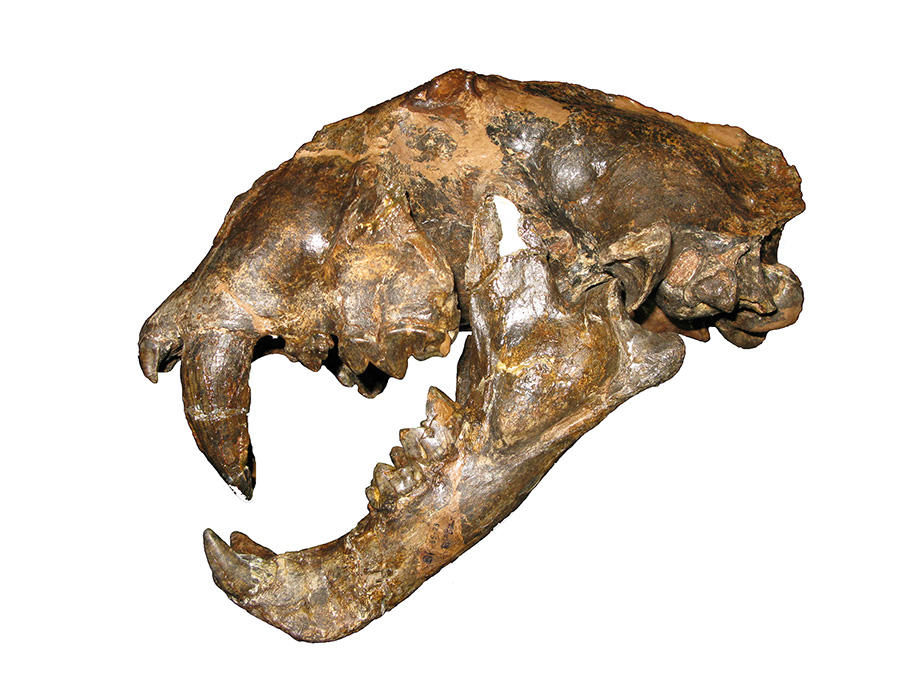 The role played by predators is highlighted by the fact that Bolt's Farm's iconic fossil is a complete skull, including the lower jaw, of a Dinofelis barlowi, a powerful sabre-toothed cat. Awesome ancestors of the lion, as big as a large tiger, have also been found there. They are, however, more closely related to European cave lions than to the species that now live in Africa. “Although the lion is an emblematic, legendary animal, not very much is known about its history,” Gommery laments. “They have left very few prehistoric remains in Africa, except at Bolt's Farm, where some thousand bones have been discovered and a new species is in the process of being described.”

In addition to their abundant scientific output, the HOMEN researchers are also paying special attention to social issues and to knowledge transfer. “It is worth remembering that the first palaeontological cooperation agreements with South Africa were signed after Nelson Mandela took office and racial segregation came to an end in 1995,” says Gommery. He took on Vilakazi, today a central partner in the HOMEN project, as a post-doc, and trained Lazarus Kgasi, now a curator at the Ditsong National Museum of Natural History in Pretoria. This is where the HOMEN project has established its facilities in order to assemble and prepare the collections from Bolt's Farm and many other sites.

The fossils have to be extracted from blocks of sediment, which involves using mechanical tools for larger bones, and chemical treatment for smaller samples. “Kgasi is now one of the best fossil preparators using acetic acid in the world,” Gommery says proudly. “He and Vilakazi are the very first black South Africans to obtain a proper palaeontologist's position, as well as excavation permits in their own names.” 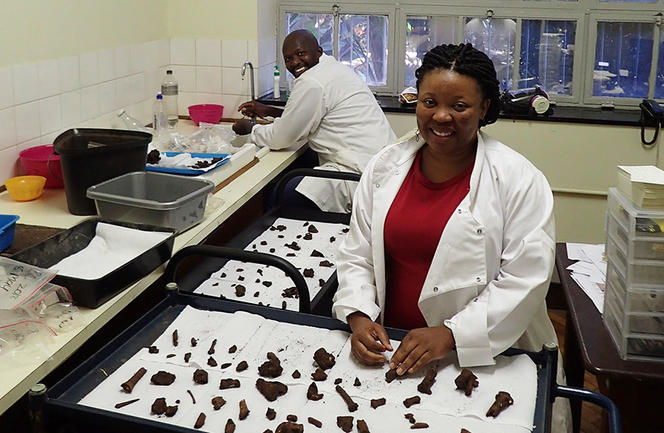 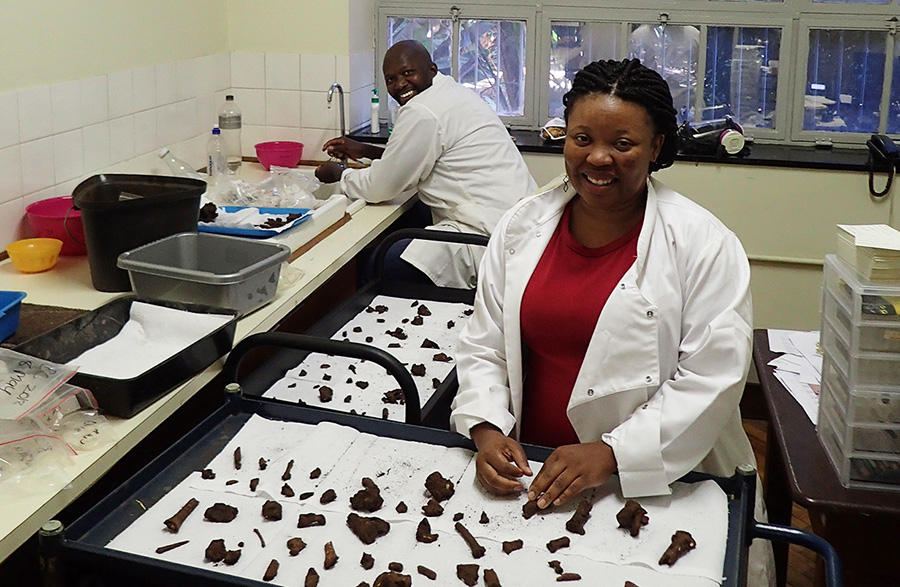 Some of the finds have since gone on display at the Ditsong National Museum of Natural History in a 300 m² semi-permanent exhibition, which researchers from the HOMEN project helped to set up, showing that international cooperation does not have to be confined to laboratories and excavation sites, but should also involve the sharing of knowledge with local populations.