Home / Articles / A Bite into the Past of Extinct Marine Reptiles

A Bite into the Past of Extinct Marine Reptiles

Home / Articles / A Bite into the Past of Extinct Marine Reptiles

A Bite into the Past of Extinct Marine Reptiles

Artwork showing cretaceous marine predators. Left to right is a non-descript invertebrate pursued by a 4 foot (1.2 metres) long Enchodus, followed by a 17 foot (5 metres) long Dolichorhynchops, followed by a 55 foot (17 metres) long Mosasaur.
Walter MYERS/SPL/COSMOS
Share
Share
Geochemists and paleontologists have cracked the secrets sealed in the calcium isotopes of fossil teeth to reveal why many large marine reptiles vanished from the Earth’s oceans during the mass extinction event 66 million years ago.

For decades, theories have flown around on why three-quarters of the world’s plant and animal species, notoriously including dinosaurs, died off over a relatively short timespan at the end of the Cretaceous period 66 million years ago—among these, the impact of a large asteroid, destructive volcanic activity, and falling sea levels. Now, significantly fine-tuning the understanding of our planet’s history, a French-Moroccan study offers unprecedented evidence on the circumstances that prompted the extinction of numerous marine predator reptiles in particular. Through analyses of calcium isotopes in fossil teeth and bones from a Moroccan deposit, geochemists and paleontologists have reconstructed the food web linking a range of marine species—a food web whose fragility ultimately led to the animals’ disappearance.1

The food consumed by these long-gone animals left chemical traces on their teeth, bones and tissue.

Fossils from ancient sea beds indicate that the oceans once seethed with a myriad of predator reptiles—the plesiosaur, for instance, that glided through water with the aid of four flippers, or the lizard-like mosasaur that propelled itself with webbed paddle-like limbs and a long tail. But as the new study demonstrates, that’s not all fossils can tell us. You are what you eat, the saying goes, and the food consumed by these long-gone animals also left chemical traces on their teeth, bones and tissue. In this way, scientists can reconstruct the diets and habits of extinct species by analyzing fossils for stable isotopesFermervariants of a chemical element that hold the same number of protons per atom, so keeping the same atomic number, but containing different numbers of neutrons, so varying in atomic weight. which do not decay over time.

One chemical element which lends itself to such analysis as it comprises several stable isotopes is calcium—conveniently so, geochemist Vincent Balter of the LGLTPE2 points out, given that “calcium makes up about 40% of the enamel in the precious teeth fossils available to us.” Balter previously participated in a study showing that the proportion of heavy stable calcium isotopes in teeth decreases the higher up animals are situated in a food web,3 but this earlier study examined more recent tooth samples. Would Cretaceous fossils, the team now wondered, stand the test of time and also offer food-web information? A question well worth investigating since “nothing is known about the food webs of extinct animals except what we can deduce from their tooth morphologies,” explains the geochemist. 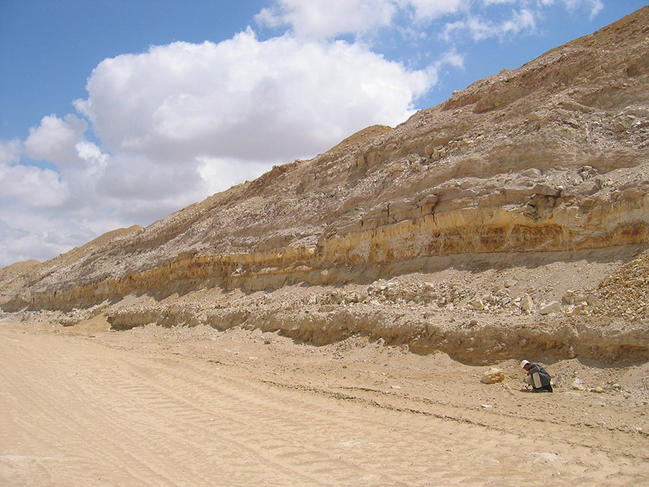 Phosphate exploitation site of the Office Chérifien des Phosphates in the Ganntour Basin (Morocco), exposing the layers of the Maastrichtian age (66 million years ago) where the fossil remains were found. 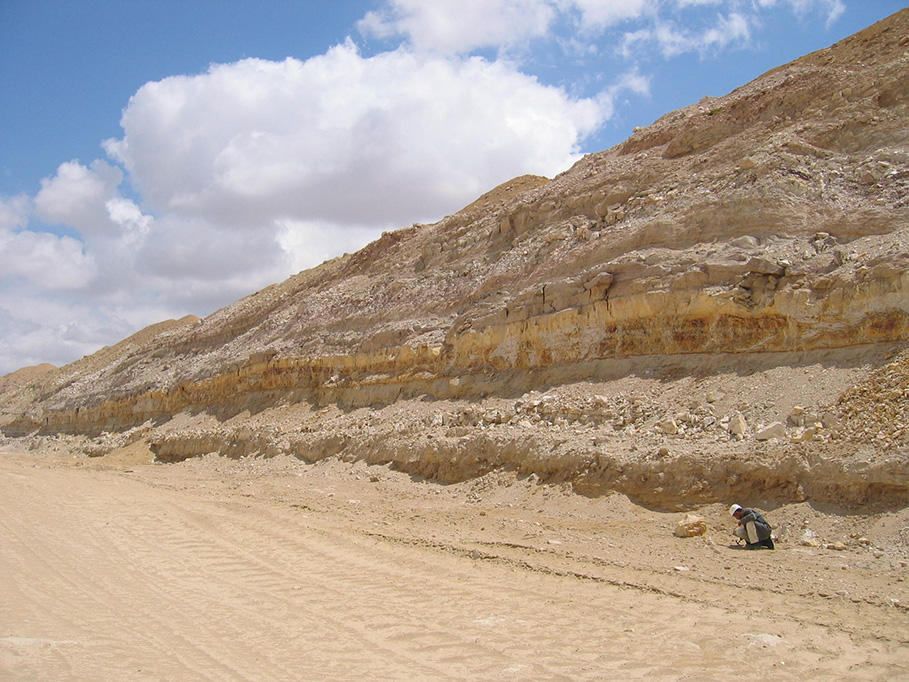 Phosphate exploitation site of the Office Chérifien des Phosphates in the Ganntour Basin (Morocco), exposing the layers of the Maastrichtian age (66 million years ago) where the fossil remains were found.
Nathalie BARDET
Nathalie BARDET
Share
Share

Scientists from the LGLTPE, the CR2P4 and the geology division of the phosphate export company OCP5 joined forces to analyze fossil samples from 16 different marine vertebrates extracted from a single level of a deposit at the Ganntour Basin in Morocco. Dating from the Maastrichtian (72-66 million years ago), the last stage of the Late Cretaceous period, the fossils comprised teeth from fish, sharks, plesiosaurs and mosasaurs, as well as bones from turtles. Balter remarks that this selection hinged on “iconic monsters from the era in an attempt to address queries on why so many terrors of the sea existed at the time but did not survive.”

Taking “minuscule samples drilled from the fossils,” the scientists first purified them to avoid interference from calcium produced during the fossilization process, then separated out the calcium from other tooth components such as phosphate. Next, they detected the calcium isotopic compositions of the samples via multicollector inductively coupled plasma mass spectrometry (MC-ICPMS). More precisely, their highly sensitive MC-ICPMS instrument used a high-temperature source to convert sample atoms into electrically-charged ions, whose mass was then measured to determine their isotopic signature.

The researchers’ question on whether their method would work on such old specimens was answered by a resounding yes. The feasibility of their approach was backed by the consistency of the stable-calcium isotope proportions detected in the Cretaceous fish, shark and turtle remains, with those in these animals’ modern-day equivalents.

As for the now-extinct animals, lead author Jeremy Martin of the LGLTPE describes the study’s results as “truly astonishing.” The teeth of the plesiosaurs and mosasaurs proved to have stable-calcium isotope proportions comparable to those of the superpredators at the very top of today’s marine food web, namely the great white shark. “The findings,” the researcher continues, “indicate that all the reptiles that vanished at the Cretaceous-Paleogene boundary were fish-eating top predators in the Maastrichtian marine ecosystem.” A new and unsuspected picture thus emerges of an era when voracious superpredators were abundant in the seas, unlike today. 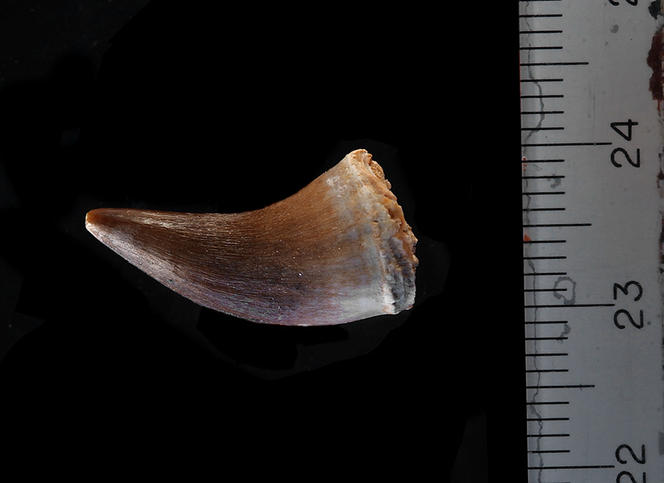 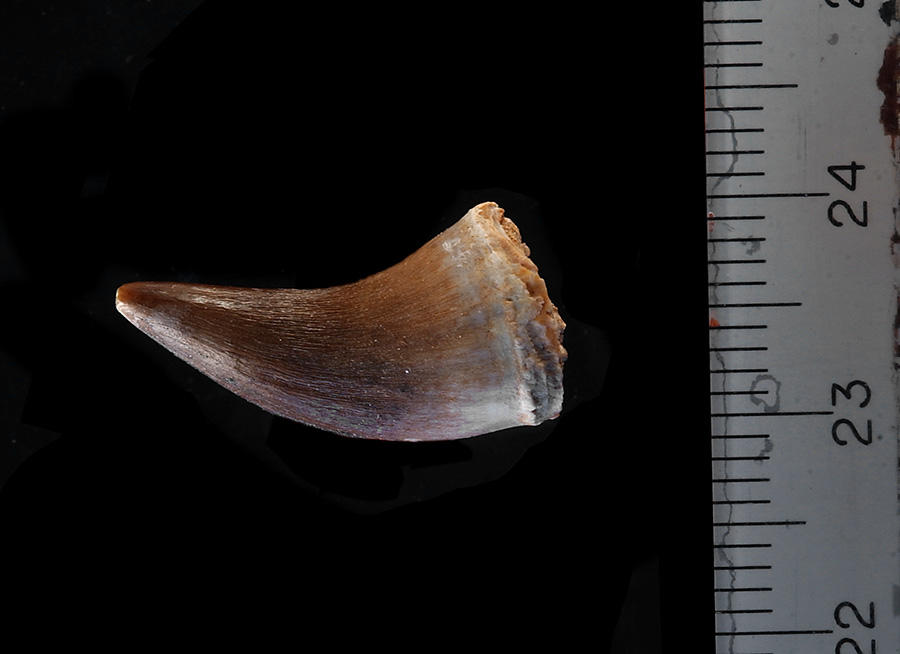 But similarities between plesiosaurs and mosasaurs didn’t stop at their superpredator status. The proportions of stable-calcium isotopes in their respective samples also turned out to be identical—“another surprise,” comment fellow team members Peggy Vincent and Nathalie Bardet from the CR2P—and an indisputable clue that the animals fed on the same calcium source, whether it was a matter of one or several fish species. “Until now, paleontologists have presumed that these reptiles managed to coexist because they had different diets, but we now show that they actually competed against one another.”

The researchers identify this rivalry between plesiosaurs and mosasaurs as the key to their vulnerability: control of their food web was exercised “bottom-up” in that any scarcity of the limited fish species that these reptiles competed for would jeopardize their survival. This was precisely what occurred at the end of the Cretaceous period when a majority of plankton species disappeared as part of the mass-extinction event. Plankton-eating fish—vital food sources for the plesiosaurs and mosasaurs—also dropped in number, triggering the reptiles’ disappearance.

Balter further notes that stable-calcium isotope analysis has “practically unlimited applications” for establishing food webs of the distant past. His team is now looking at “the food patterns of iconic dinosaur faunas, even if it will be more challenging to examine scattered continental fossils than marine ones that all come from the same location.”

See author's bio
For Tolkien, the Love of Words Comes FirstPrevious
Can the Law Save Nature?Next

Article
Biomechanics off to a flying start in BMX racing
Geochemistry

Slideshow
History Down the Drain
Fossil

Opinion
Flowers Are not Window-Dressing

Article
Hunting for the Origins of Humankind