Leaving a Mark on Mars

Leaving a Mark on Mars

You have just published a study1 suggesting that under current conditions on Mars, liquid water, even in the smallest amount and for the shortest period of time, could considerably alter the topography—and on a much greater scale than previously thought.
Marion Massé:2 Yes, to put this in context, we know that at some point—possibly 3.5 billion years ago—water was abundant on Mars, with riverbeds, lakes… Today, it is present as ice, in the form of ice caps in the north and south poles and as permafrost at mid-latitudes in both hemispheres. Yet liquid water has never been directly observed. The reason for this is that temperatures do not often exceed 0°C, and when they do, the planet’s low atmospheric pressure makes any liquid water at the surface very unstable.

By that, you mean it starts boiling and evaporates.
M. M.: It’s the same as when you climb on top of Mount Everest, where atmospheric pressure is lower. Water there boils at 60°C, instead of the 100°C on average at sea level. On Mars, water will start boiling at 0°C, or as soon as it’s liquid.

This is why we’re trying to find recent traces of liquid water.
M. M.: Yes, and we have two ways of doing that. We use spectroscopy to analyze the surface—to see its composition, whether there are salts that would indicate the presence of liquid brine. But mostly, we look at morphological structures on the surface that may result from a flowing liquid. In summer, for example, we know that some things melt on the Red Planet—such as the recently identified recurring slope lineae (RSLs). This has raised two issues: the first was to understand how a liquid could flow under these conditions, and the second was to determine whether flowing liquid on Mars would produce similar surface variations to those on Earth, under such different conditions. When we look at other planets and their surfaces, it’s very tempting to compare them with something that is familiar, like our own planet. But exotic processes may be at play that may render such comparisons meaningless.

Flow triggered by an ice cube of pure water at 0.006 bar. Geops laboratory.

And your results have challenged both hypotheses.
M. M.: Right. Many believed that if some pure water ice melted as part of a seasonal process, it wouldn’t create significant morphological features on the surface, since the water would immediately boil and evaporate. What we were able to demonstrate was that as soon as water becomes liquid, it indeed starts to boil—but as it flows downslope, it makes dirt and sand particles jump—triggering dry avalanches that will considerably affect surface morphology. We really didn’t expect that.

How was this test carried out?
M. M.: We reproduced exactly the same experiment in two laboratories and compared results. We used the cold room of the GEOPS3 lab at Paris Sud University to carry out the test under normal Earth conditions, and  a ‘Martian room’ at the Open University Laboratory in the UK. The latter was a diving decompression chamber that was modified to recreate Martian pressure at the surface. At 20°C, we placed a 70-gram ice cube on top of a sand-covered plate inclined at 30°—which is the average inclination we mostly observe for RSLs.
In both chambers, the ice cube started to melt. Under “Earth” conditions, the water started to run down the slope, creating a patch of wet sand, but no gullies, channels, or wrinkles. And as soon as it dried, there was no trace that water had ever been there. Under 'Martian' conditions, however, as water started to flow down, it boiled, ejecting sand particles on its path, which destabilized the entire slope. Once dry, these topographical changes were still very visible. This means that even though water is much more unstable on Mars, the impact it has on the surface is a lot more important than on Earth.

So the first conclusion is that even very small amounts of water could significantly alter Martian surface. And you’ve repeated this experiment several times.
M. M.: Yes, it is a more violent and energetic process than on Earth. Not only did we repeat it and found similar patterns, but we also tested it with salted water, since a type of brine is believed to be at the origin of the famous RSLs. There was a considerable difference with salted water, which by definition is more stable (and has a lower freezing point). Less boiling activity meant less visible marks. Salted water is a lot more viscous, which gives it more ability to carry sand grains—creating a gully on the slope, which we didn’t observe with pure water. When we lower the pressure further, this gully can become explosive and eject matter much further down. This creates a hole at the end of the small ravine and downslope sediment deposit of up to 50 cm. Now one of the things that we weren’t able to take into account is gravity—which is a lot weaker on Mars. So we put our findings in a computer model that showed that these sand grains would jump twice as far under Martian gravity. 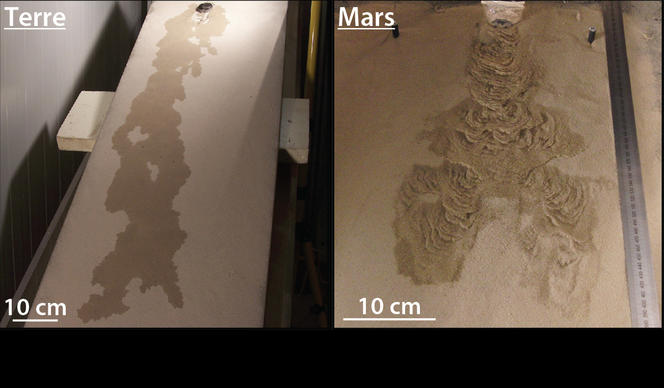 Comparison of morphologies formed by the flow of liquid water on Earth and Mars. 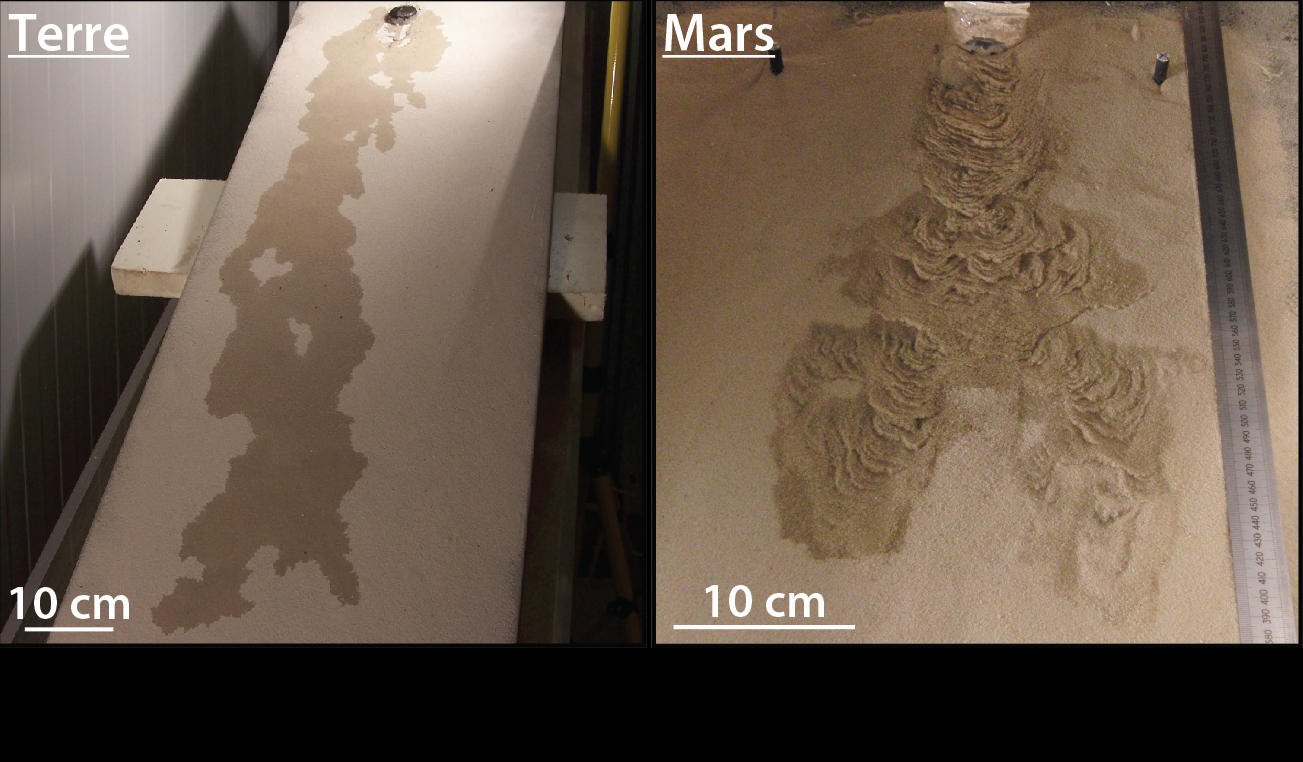 Are your findings compatible with current observations on Mars—like the RSLs, or other topographic features?
M. M.: That’s a little bit more complex. What we wanted to do first was to demonstrate that flow mechanism on Mars was not only possible, but also very different from what it is on Earth.  Basically we’ll have liquid flow, but also avalanches of dry sand—a mixed process. This means we have to rethink what we’re looking for, since features left by water on Mars could differ from what we are familiar with on Earth. Yet comparing our findings directly with the RSLs is more complicated because our observations are on a very small scale. We don’t yet have the necessary resolution to make a direct comparison between our experiment and visible features on Mars. Our gullies are 30-40 cm long, those on Mars can be hundreds of meters long.

What is the best image resolution on Mars at present?
M. M.: It’s still the HiRISE4 camera onboard the Mars Reconnaissance Orbiter, which gives us 30 cm pixels. The measurements we carried out in the lab are exactly 30 cm long…

What would it take to get confirmation? To send a rover?
M. M.: Sometimes, we observe dry sand avalanches right below the RSLs. This syncs up with what we found in the lab. But you’re right, for direct observation, rovers would be ideal—and complicated. We can’t currently land them close to a site where flow is suspected, due to contamination risks. 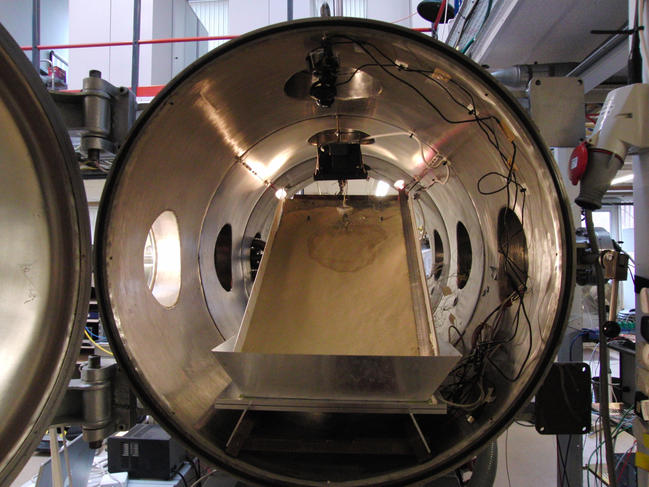 A ‘Martian room’ was created at the Open University Laboratory in the UK. It is a diving decompression chamber that was modified to recreate Martian pressure at the surface. 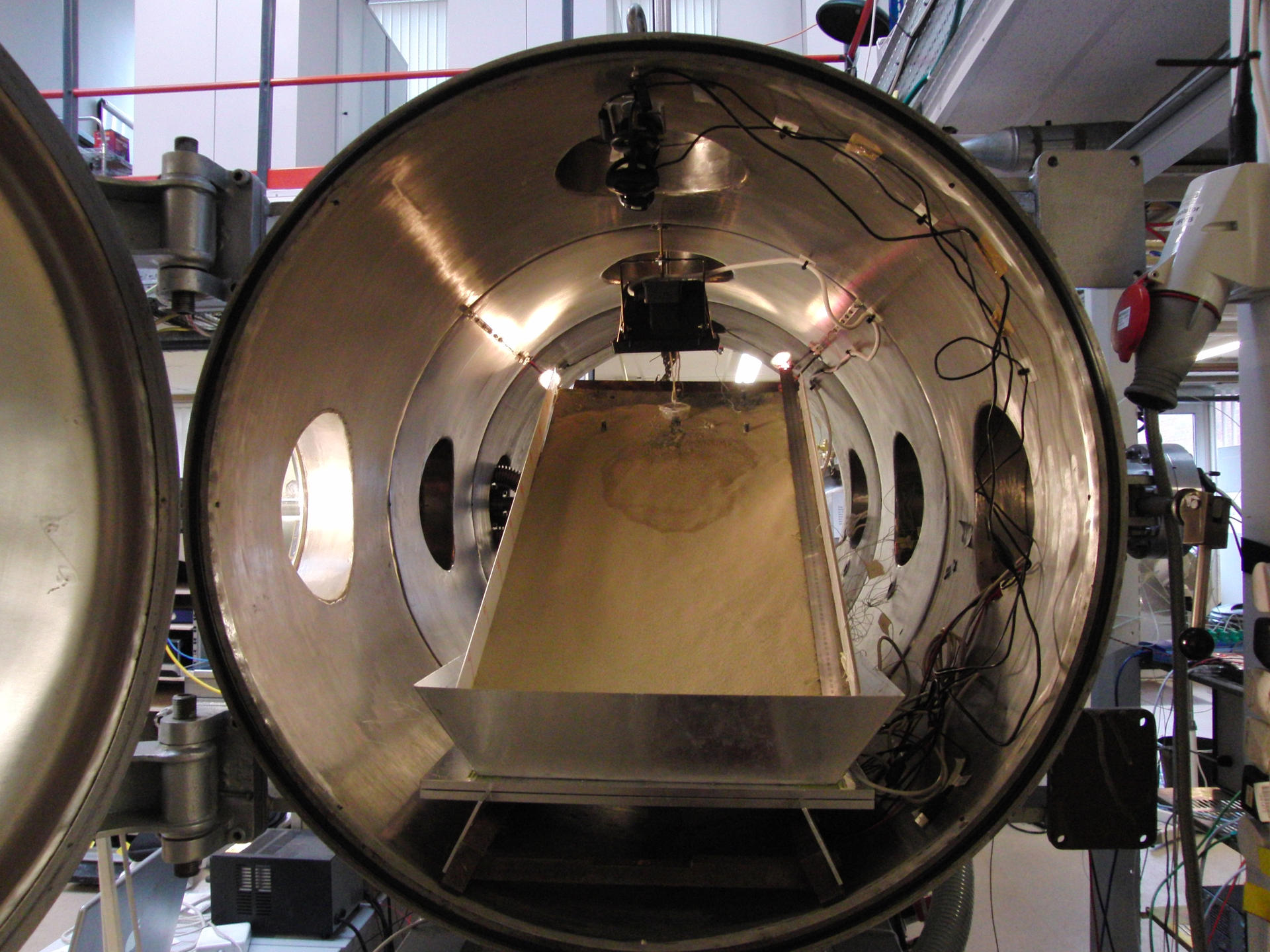 Where do you think this liquid water—pure or not— may come from?
M. M.: That’s the main issue we are faced with today. There are a few possibilities. As we’ve seen, water in ice form is everywhere on Mars—polar ice caps, permafrost... So there is water on Mars, but as ice. The fact that this ice would melt to make liquid flows is by no means impossible, but how would it continue for so long? If ice melts every summer, at one point there wouldn’t be any left. Another source could be frost, which accumulates every winter and can be locally trapped in the soil. The last solution is atmospheric water, something that was proposed recently for the RSLs. It would be absorbed in salts and released seasonally. Those are the three current hypotheses.

So Mars exploration has not deviated from its “follow the water” theme.
M. M.:  Because that’s still our best chance to find potential areas favorable to life.

Article
How are oceans born?