Home / Articles / Artemis: To the Moon and beyond

Artemis: To the Moon and beyond

Home / Articles / Artemis: To the Moon and beyond

Artemis: To the Moon and beyond

The Space Launch System (SLS) pictured on 14 June 2022 at the Kennedy Space Center in Florida, USA.
NASA
Share
Share
It's off to the Moon. 29 August was to mark the beginning of the Artemis space programme. These lunar exploration missions should lead to the return of a human crew to the Moon by 2027. The goal is to settle there for the long term, with the sights set on Mars next. An overview with Jessica Flahaut, a geologist that specialises in lunar and Martian surfaces.

Artemis has now revived lunar exploration 50 years after Apollo 17 and the last man on the Moon. How do you explain this relative disinterest over the decades?
Jessica Flahaut:1 This loss of interest resulted from a combination of factors. First, the end of the Cold War slowed the space race opposing the USSR and the United States. Apollo 17, which was completed in 1972, was the last mission to transport humans to the Moon. Luna 24 in 1976 was the last uncrewed mission—and last Soviet space probe—to bring lunar rocks back to Earth. The gradual decrease of budgets for exploration programmes forced space agencies to curtail their ambitions, and for Americans in particular, the Moon had already been conquered. Space agencies subsequently turned toward other destinations in the Solar System and beyond. In the meantime, we lost the know-how that made the Apollo programme a success. In 2013, the arrival of China and its rover Yutu as part of the Chang'e programme reshuffled the deck, while the emergence of new space powers—India, Japan, and the United Arab Emirates in addition to China—has revived the race. For them, the Moon is a first objective before proceeding further.

Artemis I is one of the three stages of this programme to relaunch human exploration of the Moon and the Solar System. What are the different stages?
J. F.: The primary objective of Artemis is clear: to initiate a long-term return to the Moon. The first stage, Artemis I, is a test flight, in other words an uncrewed mission to test—for the first time and under real conditions—NASA’s giant new rocket known as the Space Launch System (SLS). In the coming days, the SLS will put the habitable spacecraft Orion into orbit. It will make one revolution while empty—a complete orbit around the Moon—in a little over two weeks. Then it will transport the astronauts for the crewed missions to follow. Orion will have on board the European Service Module (ESM), developed by the European Space Agency. The ESM will provide its propulsion, power, and thermal regulation; it also contains the water and air supplies needed for the Artemis II and III crewed missions. In addition to serving as a test phase, Artemis I will transport a dozen nanosatellites, including ArgoMoon from the Italian Space Agency.2 These miniature satellites are capable of making a whole series of measurements. ArgoMoon will capture images of the Earth-Moon system. 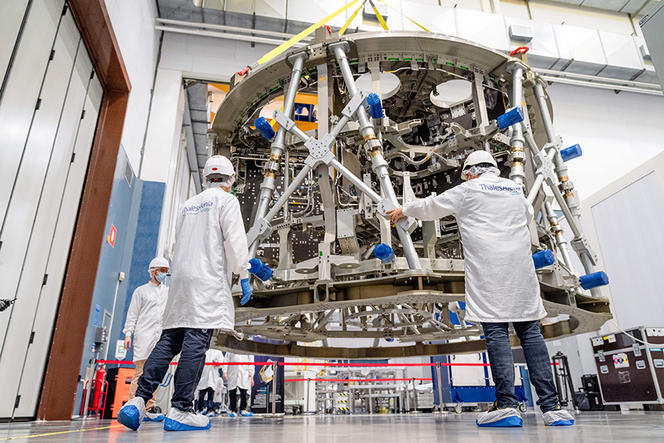 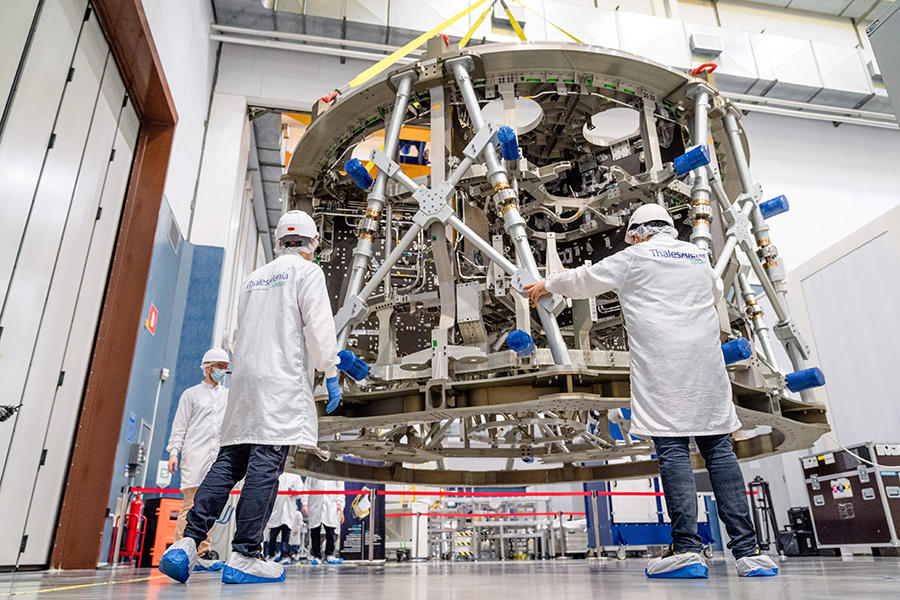 The launch of Artemis I is therefore crucial. The next step, which involves safely transporting a crew to the Moon, depends on the success of this first mission. For Artemis II, the crew will remain in lunar orbit. For the final stage, Artemis III, the spacecraft will land on the lunar south pole, and a man and a woman will once again set foot on the Moon! The ESA is also striving to have one of its astronauts take part. However, the Artemis programme's calendar is very optimistic. While the return of humans to the Moon is for now planned for 2025, it is more likely to occur in 2027.

Is Artemis more ambitious than earlier lunar exploration programmes?
J. F.: Without a doubt. In addition to our return to the Moon with Artemis, NASA is planning to install the first modules for Lunar Gateway, the future lunar station. It will succeed the International Space Station (ISS), which will be retired soon. Gateway will be six times smaller than the ISS, and will not have a permanent crew. It will serve as a scientific laboratory, and especially as a stopover for probing the Moon. Artemis also plans to explore lunar resources including rare metals such as lithium or titanium, aluminium, and water that could be extracted from the regolith, the blanket of unconsolidated material that covers the Moon's surface (and that sticks to astronauts’ spacesuits). These potential water resources could make it possible to produce fuel on the Moon. In other words, our satellite will serve as a relay station, a jumping off point for more distant crewed explorations. Artemis is also—and perhaps first and foremost—a programme designed to prepare the vehicles and technology for what follows, namely the arrival of humanity on Mars. 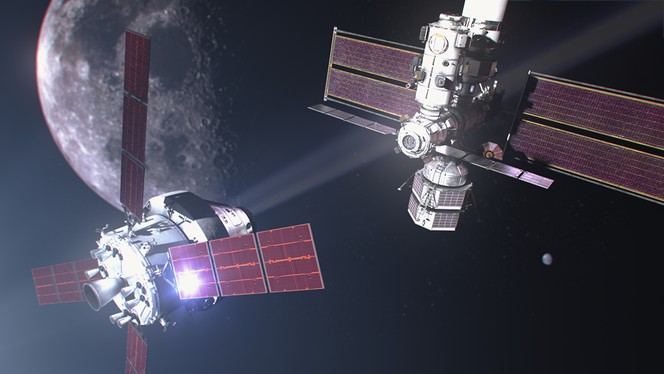 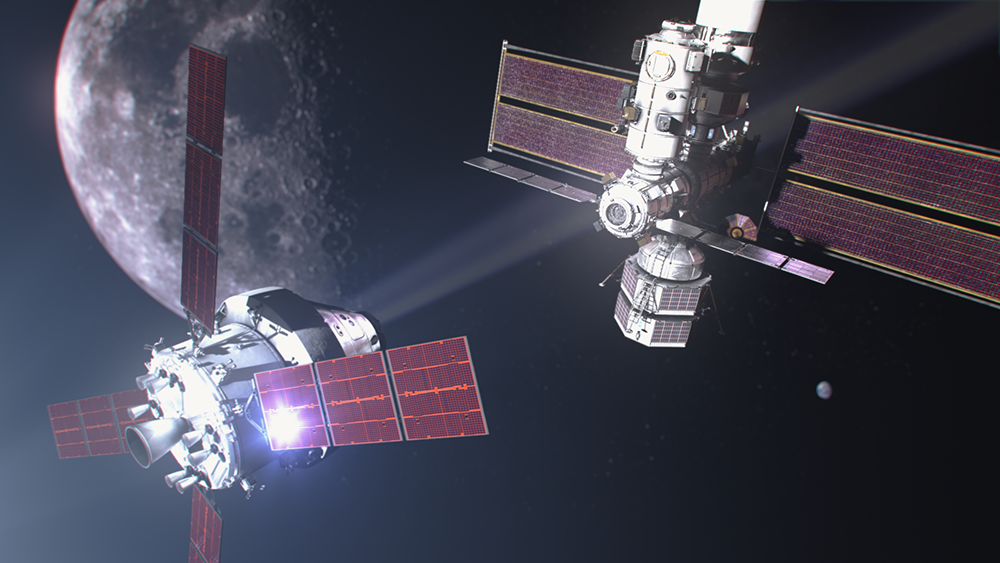 In the end, what remains to be discovered on the Moon?
J. F.: All told, twelve men have set foot on the lunar surface, and over 380 kg of lunar rocks have been brought back to Earth. But only a small part of these samples have been analysed. The rest remains under seal. NASA believes that it represents a treasure for humankind, and that it should be studied when we have higher-performance instruments and more developed analytical methods. Numerous scientific questions remain unresolved, and their number continues to grow with each mission. Since the 1990s and NASA's Clementine spacecraft, many probes have been sent into lunar orbit. They have enabled some unexpected discoveries that often remain unexplained, such as the detection of non-sampled rocks, in addition to unusual and potentially recent volcanoes. Their data also suggests that water ice could be present in specific lunar areas, including permanently shadowed craters, where the sun's rays never penetrate, and where the temperature is constantly - 170°C. These traces of water are also behind the choice of the south pole as the landing site for the Artemis III crew. 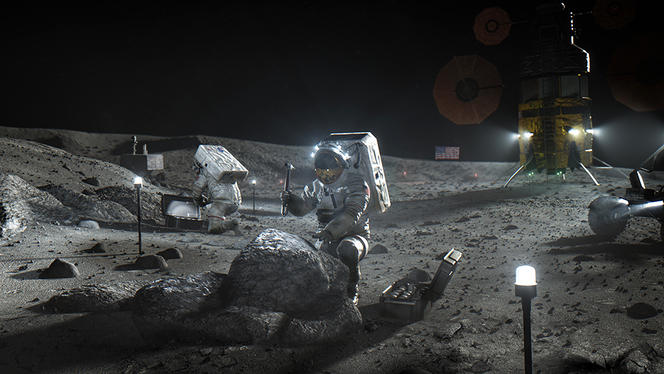 Artist's view of Atemis astronauts exploring the surface of the Moon. 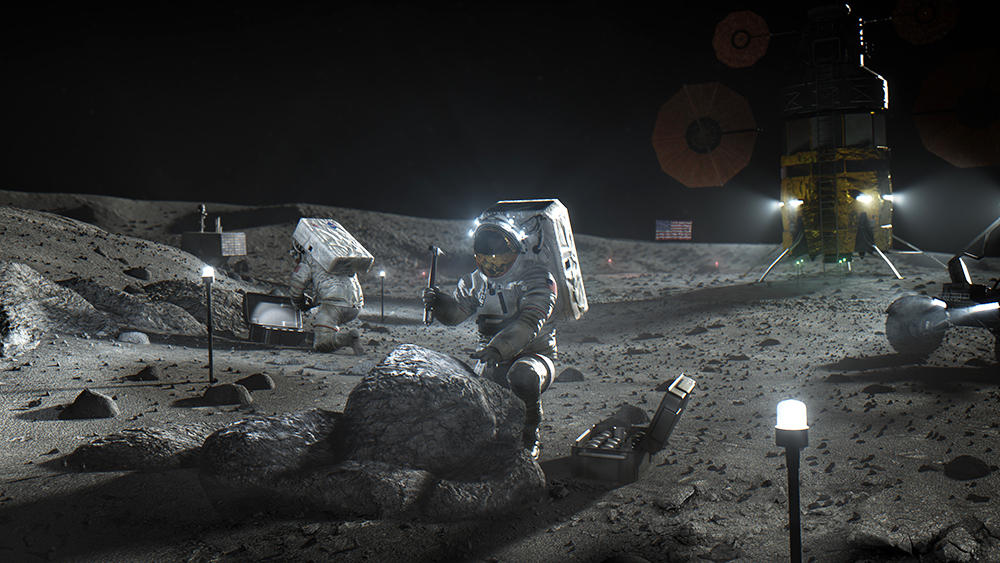 Earlier programmes helped us better understand the Moon's origin and structure, along with the major stages of its formation. We know that it came from a giant impact 4.5 billion years ago between the Mars-sized protoplanet Theia and the Earth. However, many questions remain unresolved, such as the puzzling presence of this water ice. Is it the product of later collisions with meteorites rich in water or with comets, or from volcanism on the Moon? Returning to the Moon will allow us to learn more.

With crewed missions rather than robotic rovers or orbiting probes, are we at the beginning of a new phase in space exploration?
J. F.: While crewed missions have a much higher cost than launching a single orbiting probe or landing a rover on site, they offer genuine added value. They bring back more samples to Earth, but that is not all! Astronauts have decision-making power. They are more effective; they can move faster and go further. Rovers are a bit clumsy, as they can break down, get stuck against a rock, and have difficulty accessing steep areas. Most especially, robots cannot explore large areas. For instance, Curiosity, NASA's Mars rover, has travelled a little over 28 km in ten years. Other lunar programs are also being developed. I am currently working on the Rashid rover, which will be launched by the United Arab Emirates this coming November. Commercial Lunar Payload Services (CLPS), NASA's programme for private actors, can deliver scientific and technological equipment to the Moon. Europe is participating by sending instruments, including a seismometer developed at l'Institut de physique du globe de Paris (IPGP), planned for 2025. Between the scientific aspects and technological challenges, a new chapter of space exploration has begun.​