Home / Articles / It is not too late to act for biodiversity

It is not too late to act for biodiversity

It is not too late to act for biodiversity

"Ecosystems exhibit astonishing resilience," says Bruno David, "and when humans ease the pressure on nature, positive effects soon begin to appear.”
Stefan Zimmer / EyeEm/ Getty Images
Share
Share
According to Bruno David, President of the French National Museum of Natural History, Homo sapiens is about to expose land ecosystems to a major crisis, thus increasing the risk of pandemics. Yet it is not too late to reverse the trend.

Isn’t the biodiversity crisis, whose early stages you describe in your book À l’aube de la sixième extinction (‘At the Dawn of the Sixth Extinction’), fundamentally caused by how we see and understand the world? Whereas our distant hunter-gatherer ancestors thought of themselves as being part of nature, isn’t it true that we have distanced ourselves from it and become ‘un-natural’?
Bruno David:1 The fact is that, for thousands of years, we have tended to see ourselves as being outside of and superior to the rest of nature. Unlike the plane tree, planted in 1785 by (the French naturalist) Buffon, which I can see from my office at the Museum and that doesn’t know it exists, we are self-aware, and this has led us to believe that there is a divide between us humans on the one hand, and all other living beings on the other. Because of this all too prevalent human-nature dualism, our footprint on the planet has continued to grow.

When there were just 500 million of us on Earth there was no major problem: our impact was limited and localised. But today we are eight billion, and the pressure we are putting on biodiversity is far greater, bearing in mind that the footprint of a North American is significantly larger than that of a European or an African (respectively 7 to 4 and 7 to 1). Whereas the five mass extinctions that the Earth has undergone in the last 500 million years were all caused by natural events such as volcanic eruptions or meteorite impacts, the current crisis stems from the behaviour of a rather prolific species of warm-blooded biped called Homo sapiens. To be more precise, it has a number of underlying causes. As in Murder on the Orient Express, there are several culprits, all human-related: rapid population growth, urban sprawl and land take, overexploitation of ocean resources, intensive agriculture, deforestation, pollution of all kinds, the introduction of invasive species, climate change, and so on. 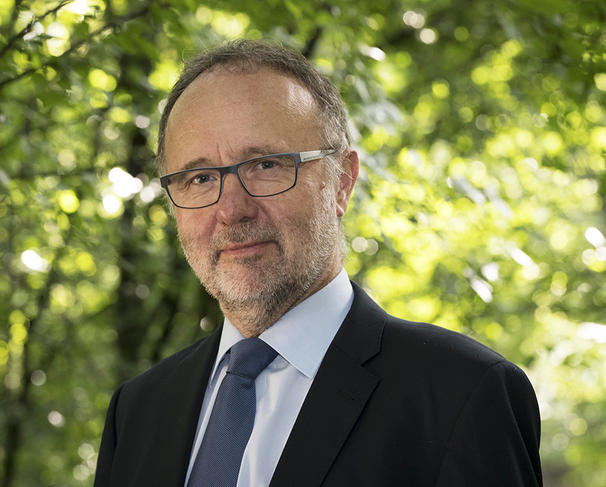 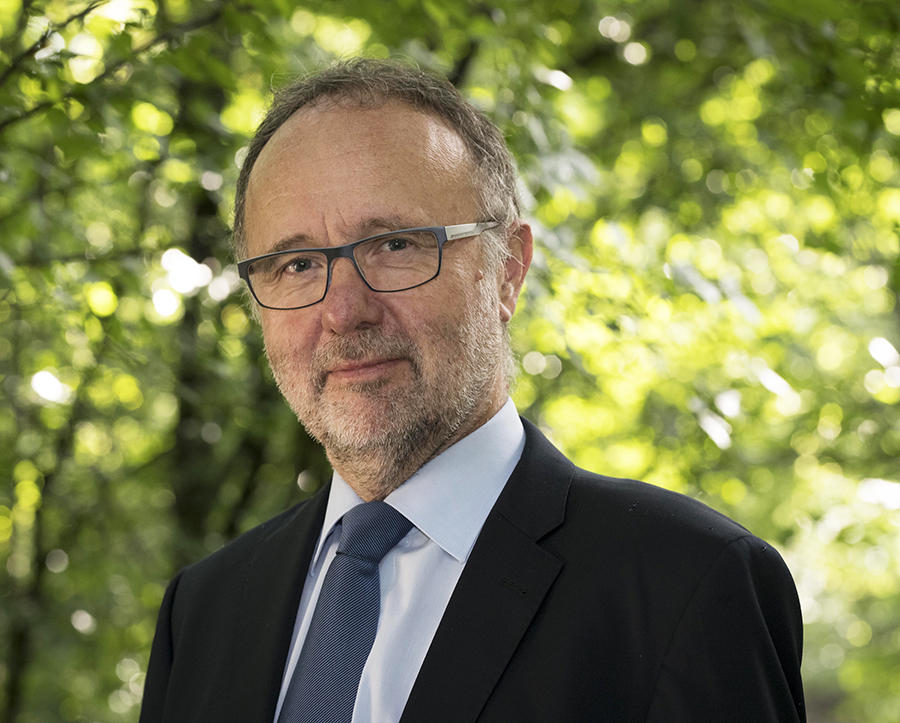 Isn’t there something absurd about trying to protect every animal and plant species, including those that are a threat to us?
B.D.: That’s a legitimate question, but thinking that we could draw up a list of ‘useful’ species and forget about the ‘useless’ ones, even if that means their disappearing altogether, betrays a lack of understanding of how the living system works. You can compare biodiversity, in other words the diversity of genes, species and ecosystems that make up the ‘living tissue’ of our planet, to the Eiffel Tower. Take away a few rivets (the equivalent of individuals) and girders (representing species), nothing will budge. Remove some more, and again, nothing serious will happen. Yet once you reach a certain threshold from which there is no turning back, the whole structure will collapse. Without all the other living organisms we simply wouldn’t be able to survive. They enable us not only to breathe – through the oxygen they produce – but also to eat, digest (thanks to the gut microbiota), heal, protect our skin with the bacterial flora that forms a kind of invisible armour on the surface of our bodies, and so on. Not to mention the fact that the extinction of a species is irreversible and that ethically speaking, we have no right to deprive our descendants of its presence on the planet. It would be a bit like going to the Louvre and setting fire to any paintings we don’t happen to like. Never mind future generations! We need to hammer home the fact that we are just one among the millions of biological species living on Earth, and that each and every one of them has a role to play.

How many species, such as the dodo on the island of Mauritius, have become extinct in the past few hundred years?
B.D.: Very few. The eradications actually recorded in each group (birds, mammals, amphibians, etc.) are in the range of 1 to 3%, or at most 10 to 12% according to the most pessimistic estimates. Only a small proportion of biodiversity has been lost, whereas each major crisis in the geological past resulted in eliminations of 75 to 80%. We are therefore merely in the early stages of a mass extinction, hence the title of my book. The real problem is that the clock is ticking extremely fast, 100 to 1000 times quicker than during previous events of this kind. Extrapolating the data collected over the past two hundred years, the extinction rate is 8 000% for mammals. Never before has the biosphere been headed for a crisis at such a speed. In May 2019, the Intergovernmental Science-Policy Platform on Biodiversity and Ecosystem Services (IPBES, the biodiversity equivalent of the IPCC) announced that over the next few decades, 500,000 to 1 million species will decline and eventually face disappearance. 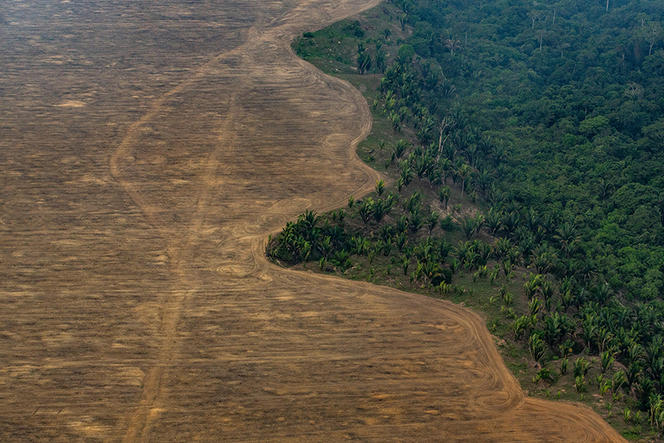 Deforestation is one of the many factors involved in biodiversity loss, as shown here by this soybean plantation growing in an area of the Amazon rainforest that has been burnt down for intensive agriculture (Porto Velho, Brazil). 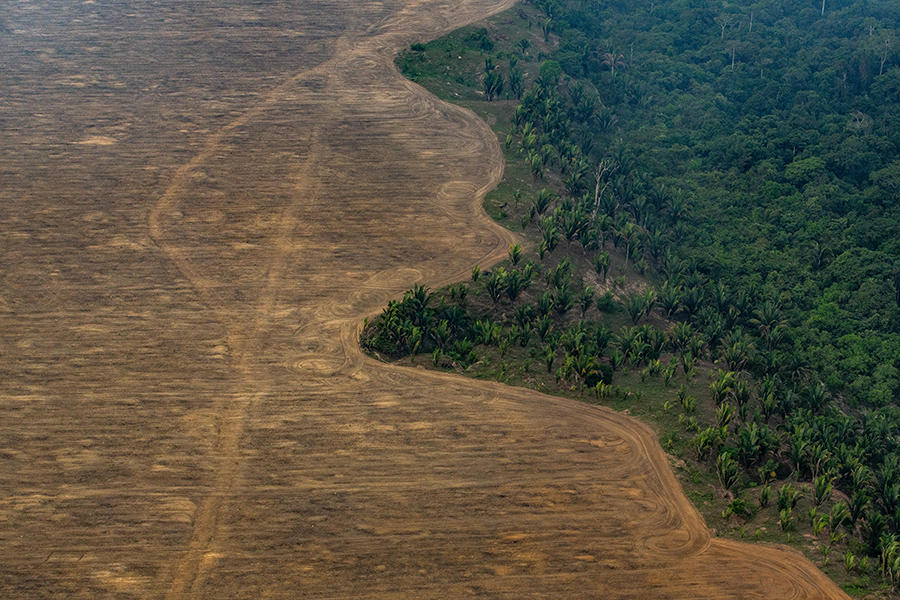 Deforestation is one of the many factors involved in biodiversity loss, as shown here by this soybean plantation growing in an area of the Amazon rainforest that has been burnt down for intensive agriculture (Porto Velho, Brazil).
Victor Moriyama/The New York Times-REDUX-REA
Victor Moriyama/The New York Times-REDUX-REA
Share
Share

Does biodiversity loss facilitate the emergence of new pandemics similar to Covid-19?
B.D.:  Without being overly pessimistic, the answer is yes. This is due to the ‘Kill the winner’ rule, which prevails in the world of pathogens, and states that infectious agents tend to go for dominant species, the most successful biological organisms, simply because they provide ‘more to eat’, as it were. Greater biodiversity means that pathogens infect a wider range of species, thus sparing us. Conversely, the more numerous we become, the more deforestation puts us in close proximity to wildlife, leading to greater consumption of bushmeat, while intensive farming provides ideal conditions for the emergence and propagation of new pathogens, the more these will see us as ‘winners’. In other words, the more we jeopardise biodiversity, the more likely we are to trigger and spread zoonotic diseases. Altering ecosystems that have taken millions of years to form is like sticking a big target on our back.

Your book is neither desperate nor depressing. You believe that there is ‘reasonable room for optimism’. Why?
B.D.: Ecosystems exhibit astonishing resilience. Biodiversity heals relatively well and quickly, as long as the limit that tips an ecosystem towards a new equilibrium is not exceeded. This means that when we take action, positive effects appear quite quickly. The Mediterranean bluefin tuna, which was on the verge of extinction in the 2000s, provides a good illustration: drastic fishing quotas and protection measures were introduced and enabled the stocks to recover. In Thailand, closing the beaches of Maya Bay for a few months was enough to bring blacktip reef sharks back close to the shoreline. Or to take another example, an oil spill is a terrible accident that devastates the coastline, and yet, ten years later no trace of the disaster remains, and marine biodiversity has completely recovered. 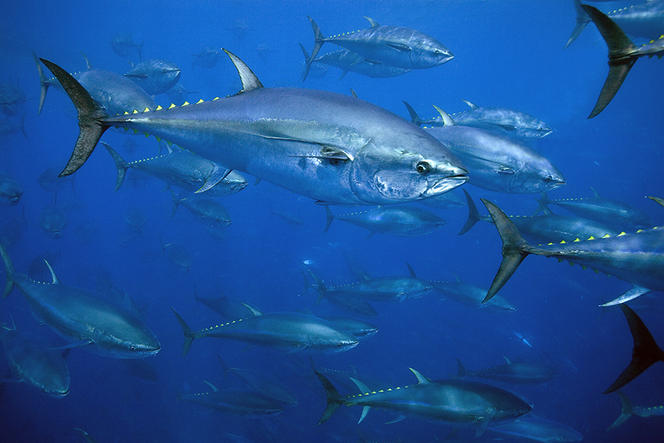 School of Atlantic bluefin tuna (Thunnus thynnus). The species has been saved from extinction by extremely strict protective measures. 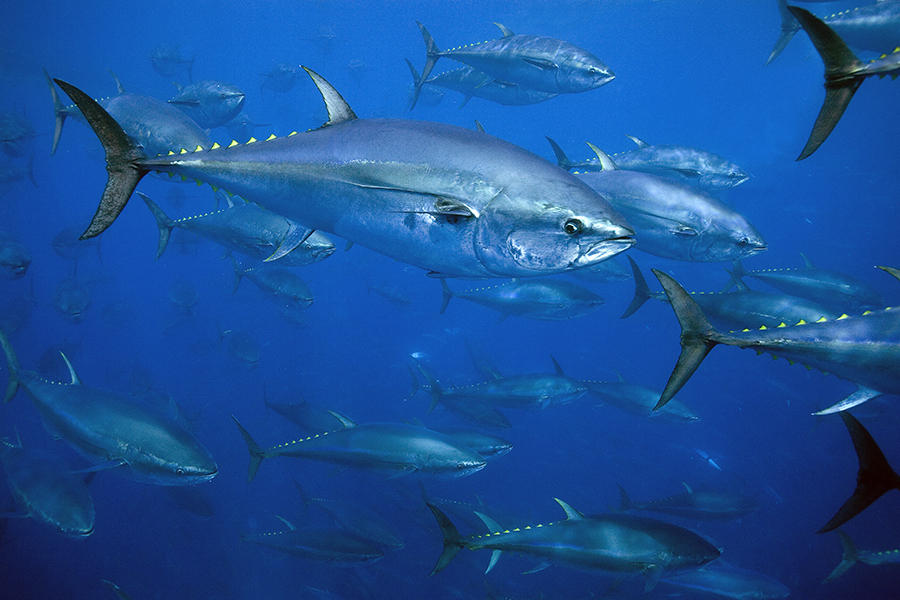 Specifically, what needs to be done to counteract biodiversity loss, which raises questions about the very future of human societies?
B.D.: I don’t want to preach, or tell people what they should or should not do. I’m only making a statement. We are exerting excessive pressure on the living world, and we urgently need to change direction. Of course, we must make sure that the measures we take are socially acceptable, to avoid the risk of rejection by the population, as we saw with the gilets jaunes yellow vests protests in France. I am also convinced that we shouldn’t believe that our technological skills, which led to the recent landing of the Perseverance rover on Mars – a fascinating achievement that fills me with admiration, could somehow enable us to control living organisms as we do machines. That would fail to do justice to the huge complexity of the planet and its biosphere. Similarly, we cannot merely settle for policies in which wildlife is totally protected in certain regions, while almost anything is permitted in others. If we are to stop squandering the resources of our planet, it is crucial that we modify our most ‘predatory’ types of behaviour. I strongly believe that individual action is the key. However small, any act carried out by millions of individuals eventually produces a significant impact. Putting an end to population growth will also prove necessary: the current increase of a billion people every 13 years is incompatible with a livable Earth. Let’s hope this happens naturally, which shouldn’t be ruled out. In this extremely private domain, any authoritarian intervention must be rejected in no uncertain terms. Although the current path Homo sapiens has put the planet on is certainly a harmful one, there is nothing inevitable about it. It isn’t too late to take action, depending on each one’s situation. Alleviating pressure on biodiversity will have positive effects on what is our common heritage.