Home / Opinions / The soil underfoot we take for granted

The soil underfoot we take for granted

Home / Opinions / The soil underfoot we take for granted

The soil underfoot we take for granted

Marc-André Selosse
What contains 25% of the Earth’s known biodiversity and 75% of its terrestrial biomass, provides its natural fertility, and regulates its watercourses as well as the climate? No need to look very far, it's right under your feet: the soil! The biologist Marc-André Selosse, who has recently written a book on the subject, explains why it's so important to look after this resource.

The soil has long been seen simply as a building ground or somewhere to plant crops, as well as a source of chemical nutrition for plants, topped up with inorganic fertilisers used in conventional agriculture. The object of little attention and considered as dirty, perhaps because we bury our dead in it, the soil is an obscure material made up of hidden components, both inorganic, like clays, and living, such as microbes, bacteria and fungi. However, the current boom in molecular microbiology, together with automated gene sequencing, which identifies species and their metabolism by means of DNA, has ushered in a revolution.

Earthworms aren't the only inhabitants of the soil: thousands of new species of fungi, bacteria and single-celled predators like amoebae can be found there. In fact, the total mass of the microbes living just beneath our feet amounts to an astonishing 5 to 10 tonnes per hectare, and the substance that gives earth its characteristic smell, geosmin, is produced by bacteria.

This biodiversity is what keeps the soil alive. The dead organic matter that falls to the ground is broken down by microbes that feed on it. In the process, they release carbon (in the form of CO2), nitrogen (as nitrates) and phosphorus (as phosphates), which can then be used as nutrients by plants. Indeed, the French chemist and microbiologist Louis Pasteur had already highlighted the role played by microbes: "Without them life would come to a halt, because death's work would be incomplete". Germs also cause alteration of rock fragments by dissolving them through local acidification, speeding up the release of minerals containing potassium, phosphorus, iron, etc, which can then be taken up by plants. 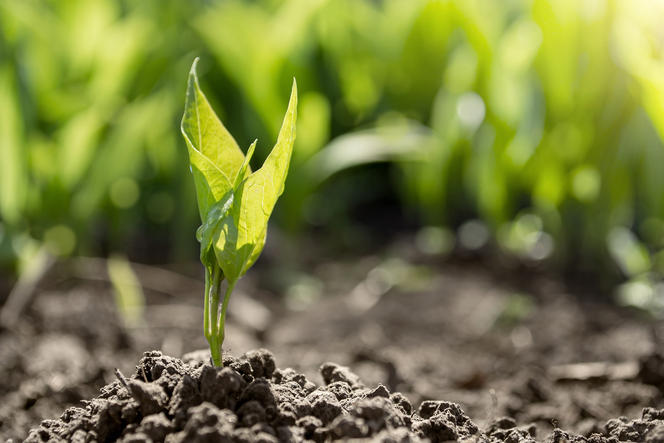 Plants live in contact with many soil microorganisms necessary for their development and survival, such as microbes and fungi. 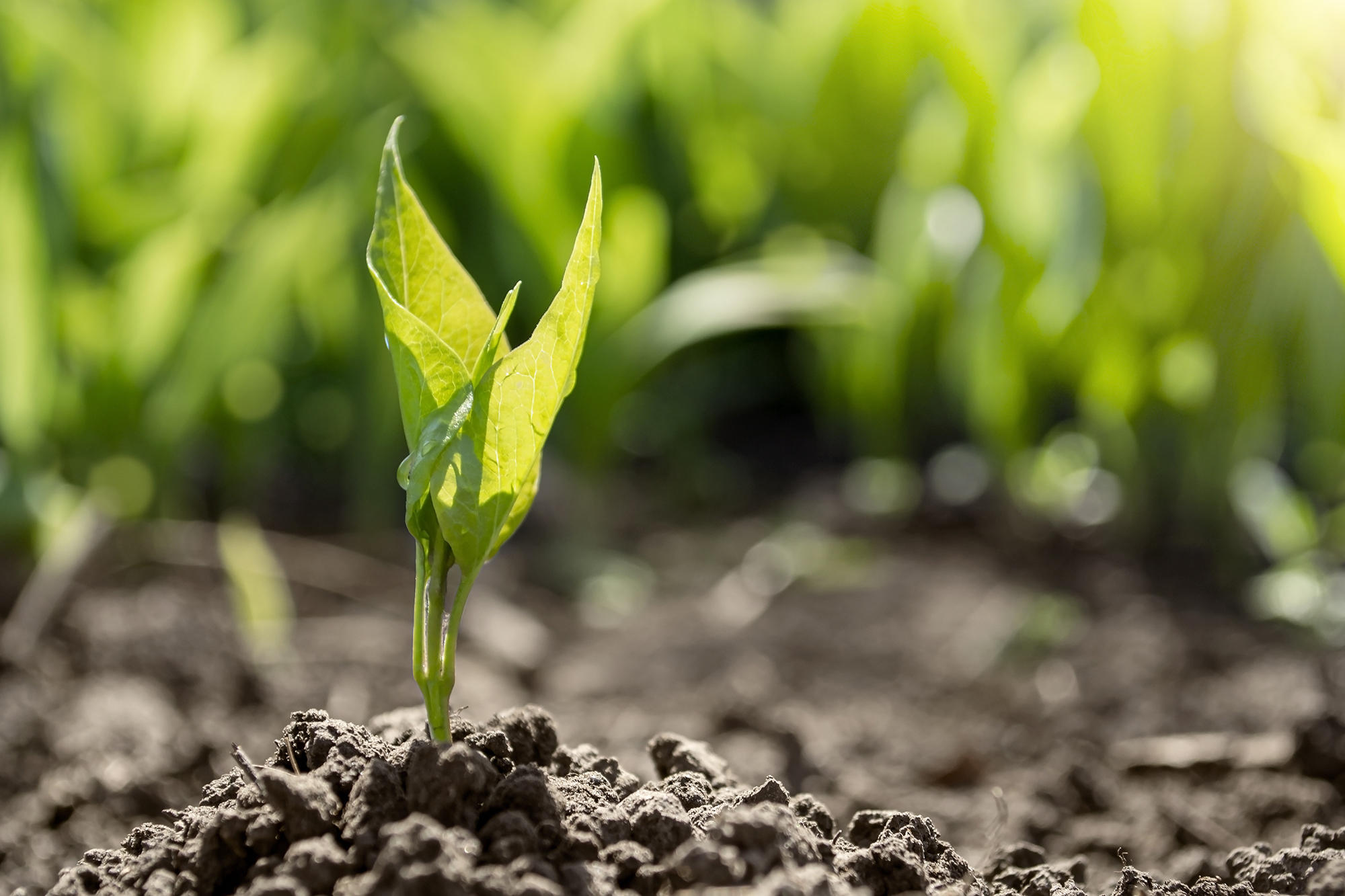 Furthermore, the pores in the soil store atmospheric gases, in particular nitrogen. This gas is essential, since some bacteria use it to manufacture their proteins. When they die, their contents are returned to the earth. This is the sole source of the nitrogen found there (and in plants), since the rocks from which soil is derived are completely devoid of it.

The living organisms in the soil churn up the organic matter, rocks and gases present there, and control their future evolution underground. Plant roots and microscopic fungal filaments supplement the work of earthworms by extracting resources deep underground and then returning them nearer to the surface when they die, in this way playing a vital role when soils contain no worms, as in North America. In addition, the roots of 90% of plants enter into a mutual association, known as a mycorrhiza, with fungi, which take up mineral resources located far from the root, and transfer them to the plant in exchange for its sugars. In this way, the vegetation forms a symbiotic relationship with microbial life in the soil.

Regulating water and the climate

However, the soil also plays a role elsewhere. For a start, it regulates the water cycle. Unlike bare rock, it limits flooding by retaining rainwater, which it then gradually releases, laden with minerals, bringing fertility to fresh and coastal waters (which explains why fishing is better there than out at sea). In addition to being a source of food, it also interacts with the climate. On the one hand, it mitigates the greenhouse effect by storing the carbon in organic matter underground, well away from the air. Yet on the other, it can also exacerbate this effect. When a soil is depleted in oxygen, the surviving bacteria use specific types of respiration that produce methane or nitrogen oxides, which are powerful greenhouse gases. This is what is happening in the frozen soils of the Arctic regions, which are melting and turning into a waterlogged slurry. 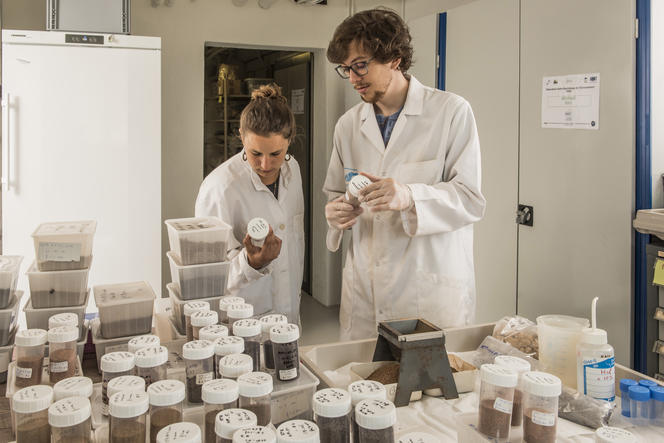 Thanks to these soil samples, researchers will be able to study the responses of the natural environment to disturbances such as atmospheric pollution, logging and, more generally, climate change. 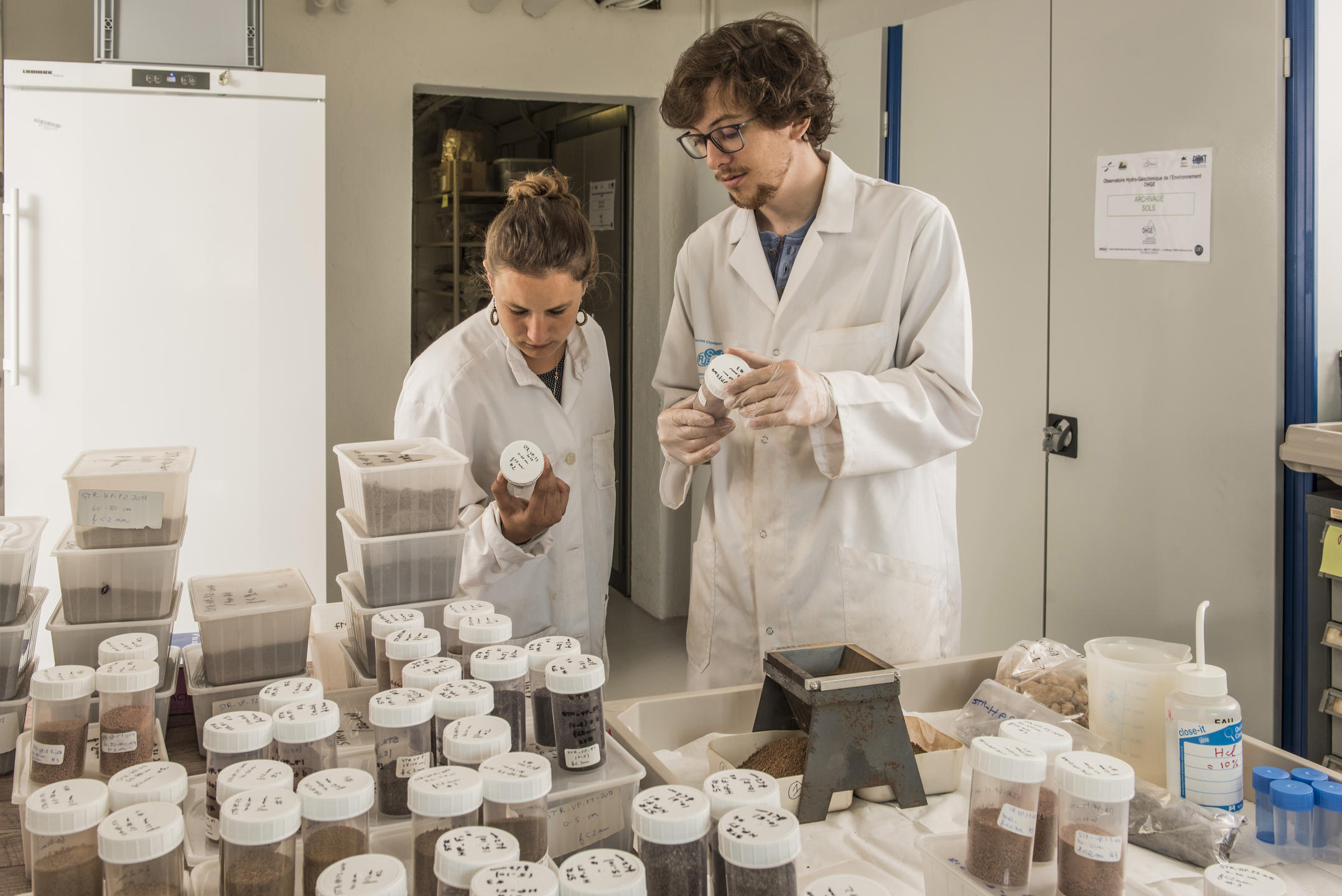 Unfortunately, our farming methods too often fail to take into account the living processes in soils. This is particularly true of ploughing. In the short term, it ensures fertility by redistributing minerals, removing weeds and aerating the earth. But in so doing, it also kills many living organisms, such as worms and fungal filaments. By aerating, it facilitates the respiration and decomposition of organic matter, which acts as a binding agent for soil constituents. In the long term however, this process, together with the destruction of roots, increases erosion tenfold. The positive effect of ploughing is therefore transitory, and disappears after a few centuries, as testified by the poor soils of the Mediterranean, which have fed so many great civilizations. Conversely, no-till practices, as used in pre-Columbian America and in conservation farming, reduce erosion.

The link between soil and climate is of major concern because our current farming practices are contributing to global warming. The loss of organic matter in farmland caused by ploughing, together with the decline in manure inputs, has reduced the ability of soils to store carbon. Irrigation creates oxygen-free zones that boost greenhouse gas emissions, especially following inputs of nitrates, the precursors of nitrogen oxides.

And yet, by burying our (properly sorted) organic waste, we could store carbon in the soil, while battling erosion. Increasing the carbon content of all the world's soils by 0.4% each year would make it possible to fix an amount of CO2 equivalent to that produced by the whole of humankind in one year. Instead of contributing to the greenhouse effect, the soil could be mitigating it: our lack of knowledge of it is depriving us of a valuable tool. 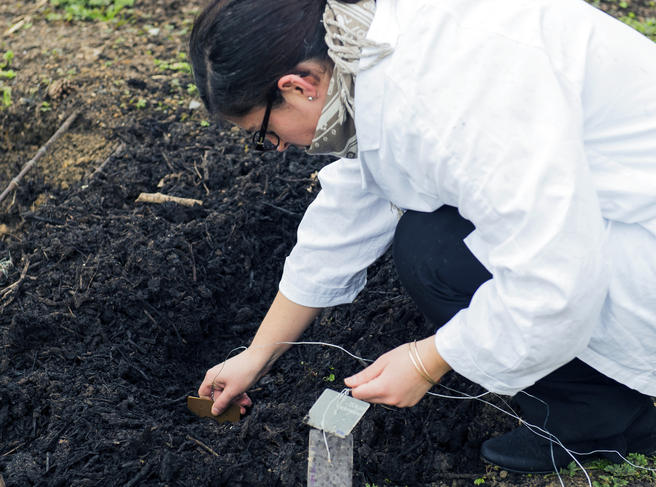 The natural biodiversity of composts can be used to identify microorganisms and biological processes. In this image, a researcher is analysing bacterial strains capable of breaking down biobased polymers. 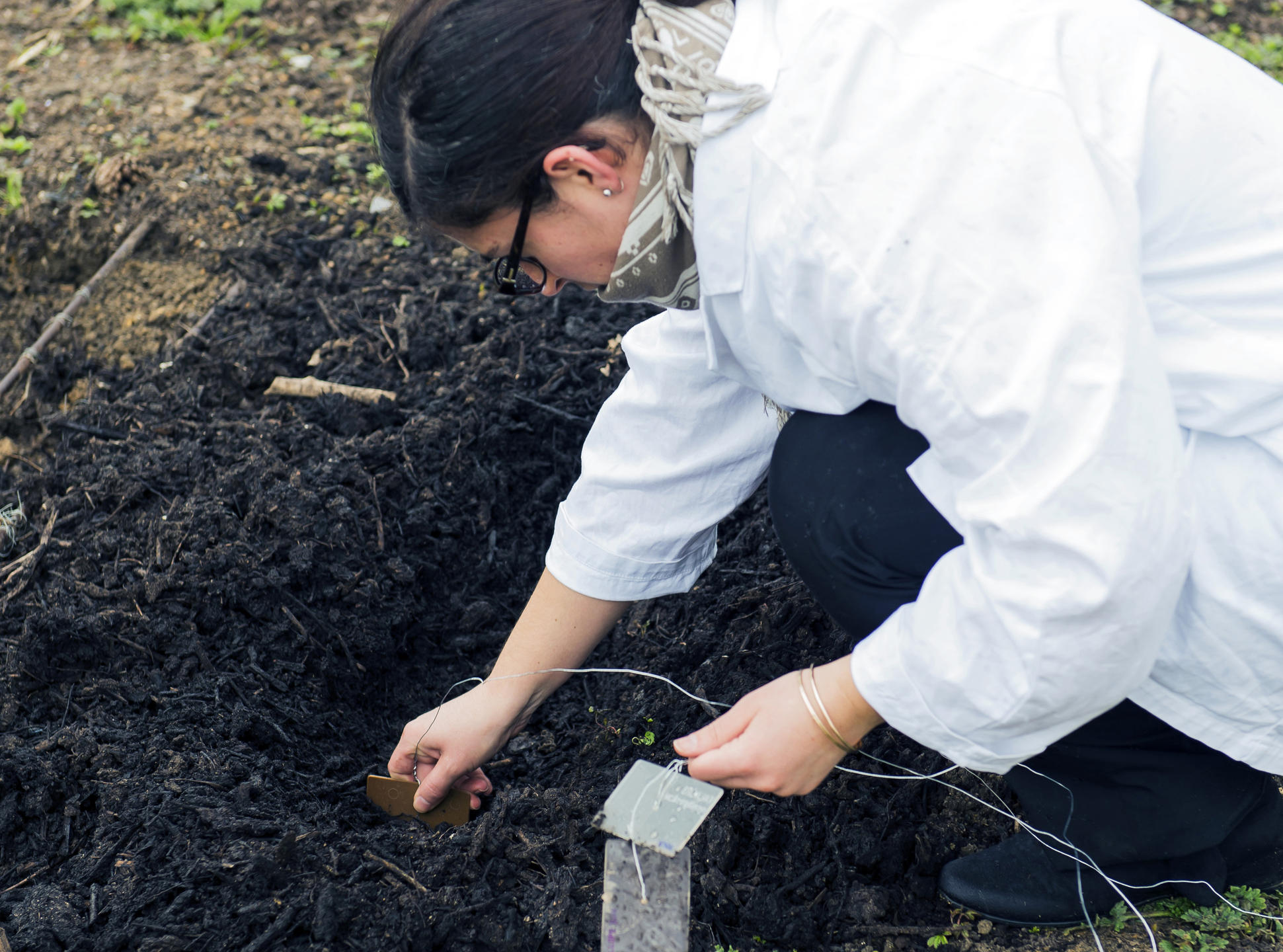 The importance of soils remains widely unrecognised. Worse still, we continue to bury them under transport infrastructure and urban sprawl. In France, an area equivalent to that of one of the country's departments is lost every ten years. Although the soil feeds and protects us, there is no way of producing it. It can be displaced, but it takes a thousand years to make fresh fertile soil.

We are neither passing on intact soils to future generations nor using them wisely. The European Union is attempting to work towards this goal: the “Caring for Soil is Caring for Life” programme aims to ensure that 75% of soils are in good health by 2030. However, this target will be hard to achieve. To better preserve this frequently forgotten yet fundamentally beneficial resource, we urgently need to raise citizens' awareness, limit the development of infrastructure, and reassess not only our farming methods but also our everyday consumption patterns.

The views, opinions and analyses expressed in this column are the sole responsibility of their author(s). In no way do they represent the position of the CNRS.

0
Memorising the passing of time Previous
How light governs sleepNext 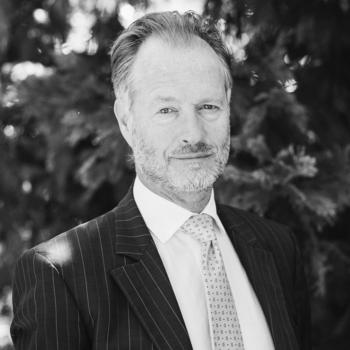 Marc-André Selosse is a member of the Institute of Systematics, Evolution, Biodiversity (ISYEB, CNRS / Sorbonne University / MNHN / EPHE unit), professor at the National Museum of...