On 18 August 2020, the Kayapó blocked the BR-163 Highway to protest against the lack of adequate resources to fight Covid-19 and demand a consultation with the authorities regarding a plan to transport cereals by rail in the region (Para State, Brazil).
Fernando Souza/ZUMA/REA
Share
Share
How has the pandemic caused by SARS-Cov-2 affected the world’s indigenous populations? Seeking to answer that question, the anthropologist and CNRS senior researcher Irène Bellier has analysed a vast body of data on the subject.

First of all, could you explain what exactly is meant by the term “indigenous populations”?
Irène Bellier:1 The expression, as it has been formally used by the United Nations since the 1970s, refers to a set of peoples, nations and communities who originally inhabited territories that were later occupied by the early colonising powers. On a worldwide scale, this encompasses nearly 6,000 societies whose numbers vary from several hundred thousand people to a few dozen individuals. Within the UN, which recognises them as distinct population groups, indigenous societies are divided among seven major regions: Africa, North America, South America and the Caribbean, the Arctic, Asia, Oceania and the Russian Federation. While they account for barely 5% of the world’s population, spread out over 90 different countries, the way they use land and natural resources has made them the custodians of 80% of the planet’s biodiversity.

As an anthropologist and vice president of the GIPTA,2 you have drafted a report giving a rather broad overview of the impact of Covid-19 among these populations. What was the purpose of this effort?
I.B.: The report aims to pinpoint the effects of the disease on these societies, which are especially vulnerable due to their social fragility and low demographic weight. I wanted to find out how indigenous populations perceived and handled the problems posed by Covid-19. To that end, I gathered data on the seven major regions previously mentioned through social networks and various online media in French, English and Spanish. For South America, I also collected personal accounts directly from members of certain communities. To expand the scope of my investigations, I also relied on information compiled by international organisations working on issues related to indigenous peoples, like the International Work Group for Indigenous Affairs (IWGIA).

What observations have you been able to make from your analysis of this data?
I.B.: The nature of coronavirus makes it an unprecedented disease for the entire human race, but its mortality rates are higher among most indigenous communities because of their adverse socioeconomic conditions, which increase their vulnerability to this new infectious agent. It was quite striking to see how this pandemic has revived memories among native societies of devastating epidemics of the past. This is especially true in the Americas, where the Amerindian population lost an estimated 90% of its original numbers due to the measles, smallpox and influenza outbreaks that these peoples have weathered over the course of their history.

How do you explain the high mortality rate of Covid-19 in these societies?
I.B.: In the United States, the high mortality observed among Native Americans like the Navajo and Cheyenne results from a lack of water supply points near their homes and the shortage of hospital facilities on Indian reservations. In addition, many Native North Americans as well as Australian Aborigines also have comorbidity factors (cardiovascular diseases, obesity, diabetes, etc.) that hinder their capacity to resist the virus. At the same time, all indigenous peoples around the world are more affected by other critical diseases like malaria, dengue fever and tuberculosis. 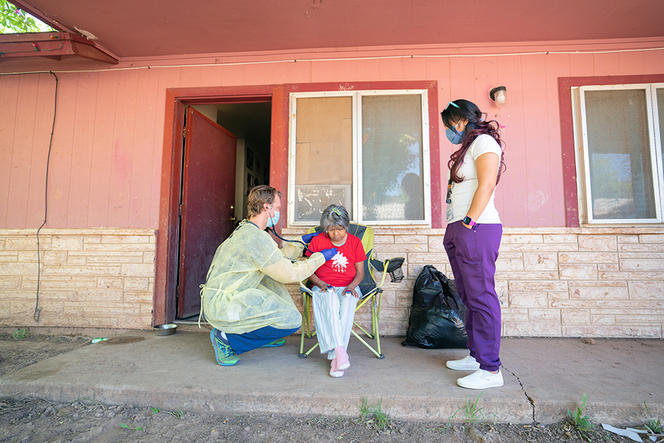 A physician at the Native American health services examines a resident of the Fort Apache Reservation, in Arizona (US) on 8 July 2020. The Covid-19 contamination rate among the Apaches in White Mountain was more than ten times higher than in the rest of the State. 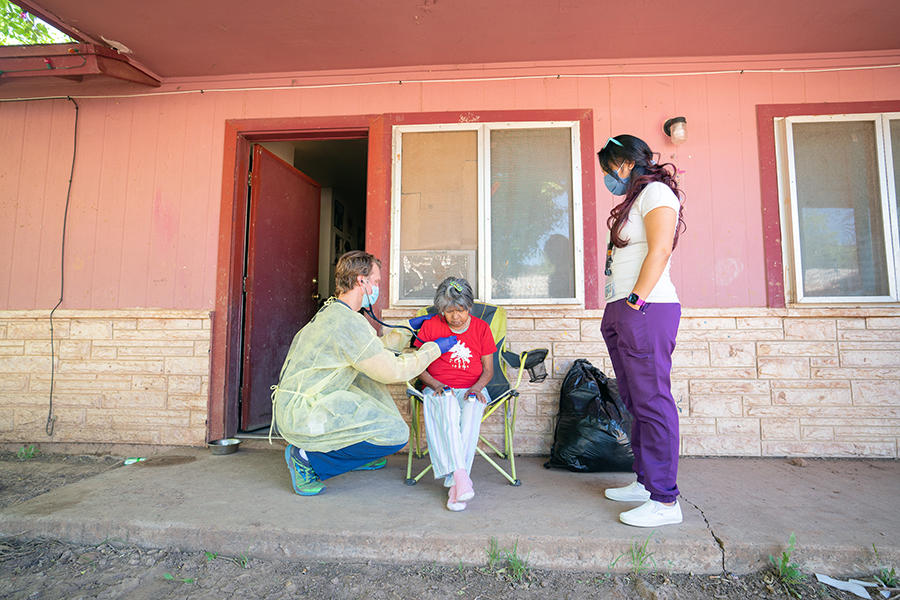 A physician at the Native American health services examines a resident of the Fort Apache Reservation, in Arizona (US) on 8 July 2020. The Covid-19 contamination rate among the Apaches in White Mountain was more than ten times higher than in the rest of the State.
TOMAS KARMELO AMAYA/The New York Times-REDUX-REA
TOMAS KARMELO AMAYA/The New York Times-REDUX-REA
Share
Share

How have these populations reacted to this threat?
I.B.: Many communities made the decision to block access to their territory, even before the closing of borders at the national level. Very soon after the start of the epidemic, they set out to identify the potential entry points of the virus. In South America, settlers, gold miners and oil industry workers were singled out and banned from entering the villages. Members of indigenous groups who had gone to the big cities to find work and tried to return home had to observe a period of quarantine outside their settlements before being allowed back in. These populations revived an ancient practice applied to everyone coming back from a trip to the city, after previous epidemics were imported by visitors from the outside. Similarly, the Yanomami in Brazil and the Orang Rimba of the Indonesian island of Sumatra chose to take refuge deep in the forest, far from the clusters of contamination.

Were these protective measures effective?
I.B.: For the Maihuna in Brazil, the decision to close the territory and impose social distancing, while at the same time monitoring outings to the city for medical supplies, has successfully limited the propagation of the virus within this population, which includes only 500 individuals. However, in most cases, restricted access procedures imposed by communities have rarely been observed by non-indigenous people or the authorities. 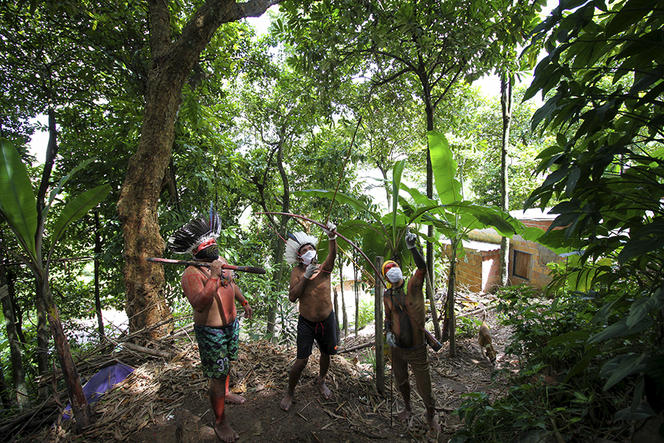 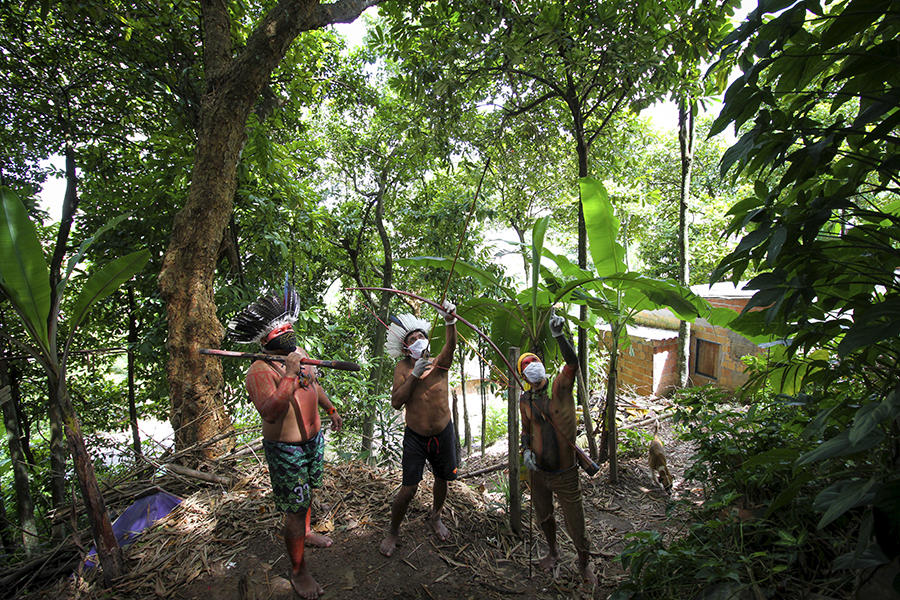 In reaction to governments’ mishandling of the situation, have any of these societies fallen back on traditional lore to protect themselves against coronavirus?
I.B.: Failing tests, drugs and disinfectants, some have indeed resorted to an array of remedies intended to boost the body’s immune defences and protect the respiratory tract against infections. Many indigenous peoples have traditional plant-based treatments to fight various diseases through infusion, fumigation or sudation. To some extent, the Covid-19 epidemic has revived the use of medicinal plants among native societies.

How have these societies, which remain closely connected to their environment, perceived the origin of this pandemic?
I.B.: For them, there is a very strong link between the “health” of the land and that of people. They know that certain types of resource exploitation, such as deforestation, mining, oil drilling and intensive soybean farming, are harmful to their territory and, consequently, to its inhabitants. In the Americas, the virus is perceived as a sign of disorder, related to a disruption in the balance between nature and agriculture. For the Mapuche in Chile, Covid-19 is the result of the violation of sacred spaces like the seas, hills, lakes and rivers, linked to their industrial exploitation.

Your analysis also indicates that for indigenous populations the harmful effects of Covid-19 are not limited to health.
I.B.: During the coronavirus crisis, several projects to exploit natural resources on native peoples’ land have been launched with no prior consultation of the communities concerned. Since the beginning of the pandemic, their living environments have been subjected to more and more abuse. In fact, international law and, since 2007, the United Nations Declaration on the Rights of Indigenous Peoples have urged governments to consult these populations and obtain their consent for all projects that could affect their way of life. But with the pandemic, these processes have broken down. In the name of “economic development”, many mining, oil drilling and agro-industrial projects have been forced through. And France is no exception in this area: last May the mining authority in Guiana approved a new open-pit gold mining programme without bothering to discuss it with the indigenous people living in the region.

See author's bio
Is there a point of no return in ecosystems?Previous
Embryonic cells communicate to organise themselvesNext

Article
Pasteur beyond the legend
Anthropology

Article
Sport, a Reflection of our Societies
Covid-19