Hard at Work Inside Notre-Dame

Hard at Work Inside Notre-Dame

Clearing up the beams in the cathedral, 17 July, 2019.
S. DE SAKUTIN/POOL/AFP
Share
Share
Every single piece of debris from the Notre-Dame blaze is being collected by scientists. Working in coordination with rope access technicians and mini-excavators, a team of researchers are hard at work recovering the charred beams, hoping to unveil the secrets they hold. Last summer, CNRS News caught up with them at the cathedral site to see how they were getting on.

Not one piece of debris escapes Catherine Lavier’s attention. Impressively kitted out with a safety helmet, respirator mask and full white overalls, she closely watches the excavator’s every movement, as it carefully extracts charred beams from the huge pile of burnt rafters that remains lying in the nave of Notre-Dame de Paris.

It’s 9 am on 11 July, and as she has done nearly every day for the last three months, the researcher, who specialises in the archaeology of wood at the C2RMF1 is hard at work in this post-apocalyptic setting, with one goal in mind: to recover as much material as possible from this incredible mess.

“After the fire, we quickly made it clear that nothing should be thrown away. These beams are nothing less than an open window into the Middle Ages,” she explains as she staples a label onto a blackened rafter that Pierre Marinier, the excavator driver, has just laid at her feet. “Trees record everything. The slightest stress is indicative of an event,” she goes on. “Analysing these ancient trunks provides us with a wealth of information about a tree’s growth conditions and origin.” 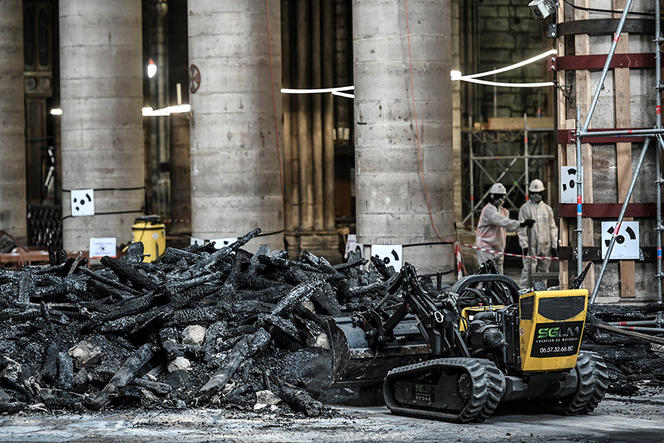 The charred beams are meticulously inventoried. 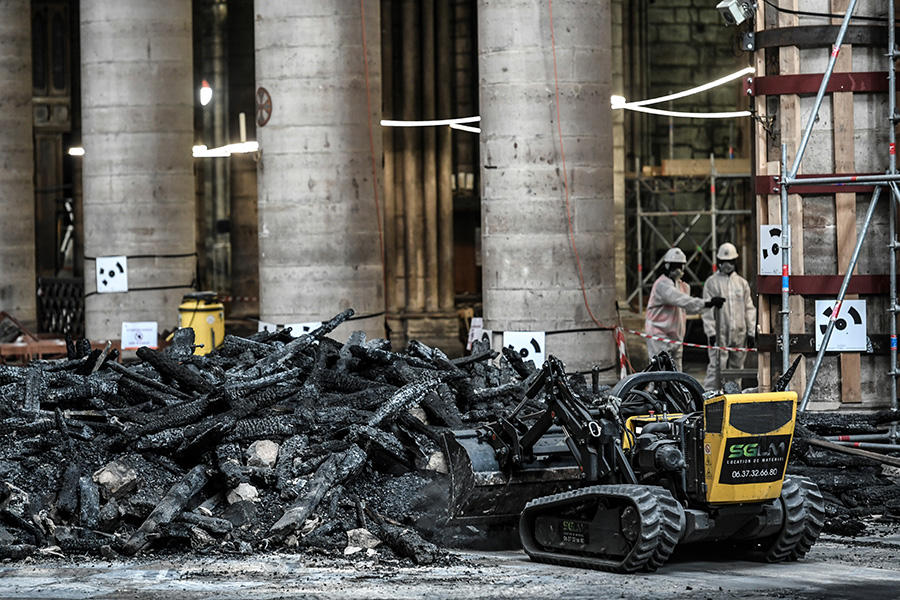 Until recently, only a few cores of wood had been collected for analysis from the eight-century-old roof structure. “All we had then was fragmentary data. Now we’ll be working with beams that are almost intact,” explains Alexa Dufraisse, a dendro-anthracologist at the AASPE2 laboratory and coordinator of the Notre-Dame “Timber and Roof Structure” working group, jointly led by the CNRS and the French Ministry of Culture.

In this month of July, the scientist does not yet have access to the cathedral, and is looking forward to being able to examine the debris, including the most badly charred. For her speciality consists precisely in interpreting carbonised wood. “Using a Raman spectrometerFermerDevice that characterises the molecular composition of a sample by measuring changes in the frequency of light passing through it. spectrometer will enable us to obtain the distribution of carbon in the various molecules making up the wood, such as cellulose, lignin and so on. Since this breakdown varies according to the type of carbonisation, we will be able to evaluate its intensity. We will then compare the samples with models of wood that we have burnt in the lab and whose properties we know.”

Fifteen metres above the heaps of charred timber

“I’ll take that one!” To make himself heard above the din of his excavator and of the machine vacuuming up the dust that constantly rains down dislodged by pigeons, Pierre Marinier has to shout through his mask. Rather than collecting the debris at random, he follows instructions from Priscilla Debouige, a technician at the French National Institute for Preventive Archaeological Research (INRAP), who identifies each item collected by the excavator on an aerial photograph of the nave and assigns it a number on the screen of her tablet.

For now, all the researchers are doing is assembling the pieces of a gigantic puzzle. “We are still only in the pre-inventory stage,”3 Catherine Lavier points out. “What we’re trying to do is find out where all the pieces fell from, number them, and store them in marquees installed outside the cathedral.”

The following stage will be the inventory proper: “We will examine each item one by one, measure it and describe what we see.” Since the fire, some 3,000 fragments have been removed from the debris, labelled and stored. In the last two hours this morning, sixteen more have joined them. “Clear the area!”. Fifteen metres above the heaps of charred timber and white-suited workers, a team of rope access technicians is stretching a net over the nave to catch any falling objects. And nothing, not even the most inaccessible pieces, will be allowed to escape the inventory. “This initial work is going to take months!” says Catherine Lavier, who is there to oversee the removal of even the smallest piece of debris. “It’s only once that’s finished that we’ll be able to send samples to a number of labs.”

Alexa Dufraisse is in no doubt as to what she will do with her treasure-trove: “We will cut the trunks up into slices, and then analyse them on a dendrochronology workbench, a device that is used to observe tree rings and infer the tree’s growth, as well as its felling time and age, (which are probably younger than thought, Editor’s Note).”

The researcher and her co-workers4 are also hoping to discover the composition of the soil in which the trees grew, and thus identify where they came from. They will do this using an Itrax MultiscannerFermerInstrument that combines X-ray fluorescence, magnetic spectroscopy and X-ray radiography to measure the chemical concentration of elements..5  “Specifically, we are going to measure the calcium, manganese and aluminium content, which is particularly indicative of the characteristics of a substrate. The trees are thought to have come from the Paris Basin, but we may be in for some surprises!” 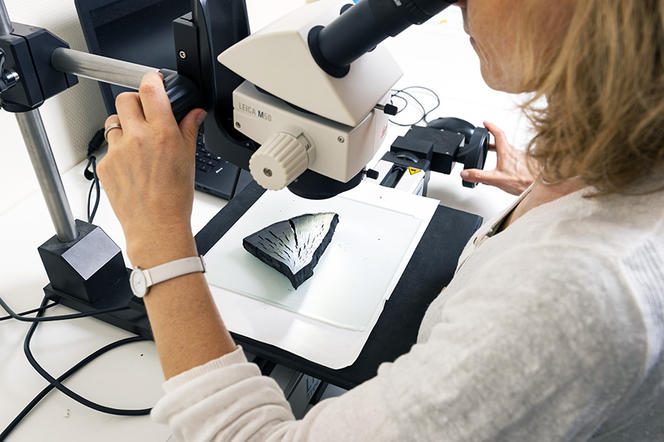 Dendrochronology workbench on which Alexa Dufraisse is analysing a ‘control’ piece of charred wood in order to compare its properties with those of samples from the roof structure. 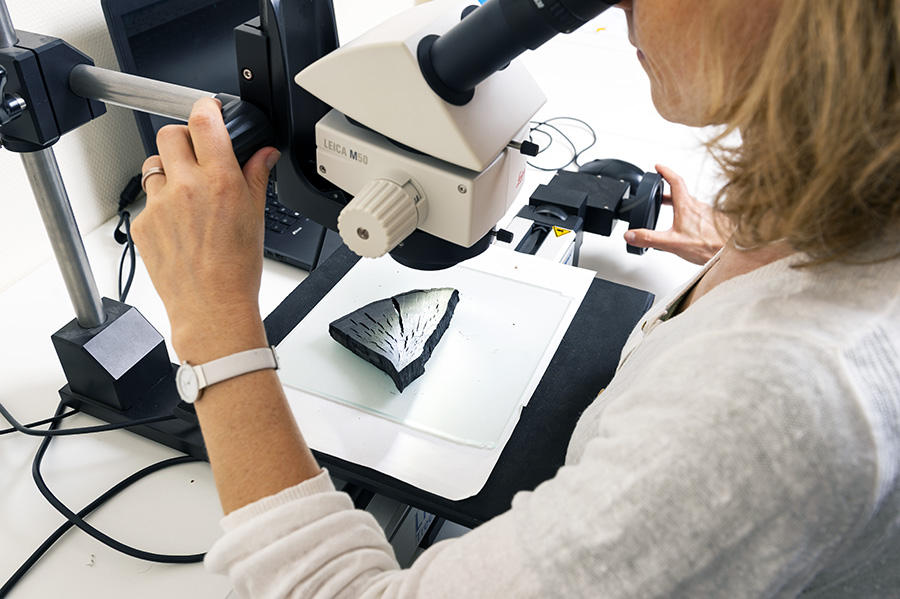 Alexa Dufraisse, Catherine Lavier and their colleagues6 are also hoping that these relics will tell them something about the climate of the time. Notre-Dame was built partly during the Medieval Climate Optimum (from the ninth to twelfth centuries), a period of significant warming. So just how warm and dry was it at that time? “We hope to find out using isotopeFermerIsotopes are atoms with the same number of protons but a different number of neutrons. For example, carbon-14 (6 protons, 8 neutrons) is an isotope of carbon (6 protons, 6 neutrons).-ratio mass spectrometry,” Alexa Dufraisse responds. “This will enable us to measure the proportion of carbon-13 in carbon and of oxygen-187 in oxygen, as plants assimilate larger amounts of carbon-13 when the climate is drier and of oxygen-18 when it is warmer.”

At 11 am, Pierre Marinier shuts down his excavator, and peace descends on the cathedral: it’s time for a compulsory break. Catherine Lavier takes the opportunity to have a quick look at the samples stored in front of the cathedral. But first, still wearing her protective coverall and footwear, she takes a shower in order to remove as many lead particles as possible. “I haven’t seen all of it yet,” she says, as she looks over the rows of blackened timber. “This is a real mine of information, rare material that will keep researchers the world over busy for years…” Suddenly her walkie-talkie crackles: “Catherine, time to get back!” The researcher hurries towards the cathedral. There isn’t a moment, or a piece of debris, to lose.

See author's bio
How to Fight Deforestation in the Amazon?Previous
A Different Perspective on African History Next

Video
Notre-Dame, a vessel of stone and iron