Artist's view of a kilonova, produced by the fusion and explosion of two neutron stars, an exceptional event observed on August 17, 2017.
ESO/L. Calçada/M. Kornmesser
Share
Share
A series of observations on an unprecedented scale combining detection of gravitational waves and electromagnetic signals at all wavelengths sheds light on unsolved mysteries of astrophysics.

Guillaume Dubus,1 coordinator of France's National High-Energy Astrophysics Program,2 does not beat about the bush: "This is just huge!," he says, incredulous. On October 16, the LIGO-Virgo international collaboration announced that it had observed the first-ever merger of two neutron stars when it detected the gravitational waves emitted during this cataclysmic event. Coming after several observations of mergers of two black holes in recent months, this is yet another demonstration of the enormous potential of the burgeoning science of gravitational astronomy, which earned the French physicists Alain Brillet and Thibault Damour this year's CNRS Gold Medal. But that’s not all. Thanks to the accurate localization of the source of the phenomenon by the Virgo and LIGO interferometers, ground- and space-based astronomical telescopes were able to follow up and observe this unprecedented cosmic event at all wavelengths. As a result, several decades-old mysteries have been solved and a spate of fresh discoveries made, to which more than 150 French researchers have contributed, alongside the scientists of the Virgo collaboration—proof that astronomers have now fully entered the era of multi-messenger astronomy.

The wave of August 17

It all began on August 17, when the three LIGO-Virgo interferometers detected the signal of a passing gravitational wave. Once again, their extraordinary sensitivity enabled them to record the tiny distortions in space-time caused by an ultra high-energy astrophysical event. Yet this time it was not the merger of two black holes but that of two neutron stars, ultra-dense bodies with the mass of a star but a radius of 10 to 15 kilometers, exclusively made up of neutrons (one of the constituents of atomic nuclei), and both resulting from the explosion of a massive star.

Gravitational interferometry really is opening up a new window onto the Universe."

As Benoît Mours,3 Principal Investigator for Virgo in France, explains, "for several tens of seconds we recorded an extremely clear gravitational signal, corresponding to the coalescence of two neutron stars, located 130 million light-years from Earth and with a mass lying somewhere between 1.1 and 1.6 times the mass of the Sun, that finally merged at 12:41 and 4 seconds, Coordinated Universal Time."

"I'm very happy to have witnessed this event," says Alain Brillet, the designer of the Virgo interferometer, which in its 'Advanced' configuration that came into operation on August 1 has multiplied the spatial resolution of LIGO-Virgo by a factor of around ten. "After those of black holes, the merger of two neutron stars was clearly the next decisive step, proving that gravitational interferometry really is opening up a new window onto the Universe." At the same time, Thibault Damour, a major contributor to the analytical developments that made it possible to describe the precise shape of the gravitational signals sought by LIGO-Virgo, is upbeat about the prospects opened up by this new detection: "Using gravitational waves, our instruments are now sensitive enough to measure the deformation of bodies caused by mutual tidal effects, which will enable us to probe the detailed properties of the highly exotic matter that makes up neutron stars." 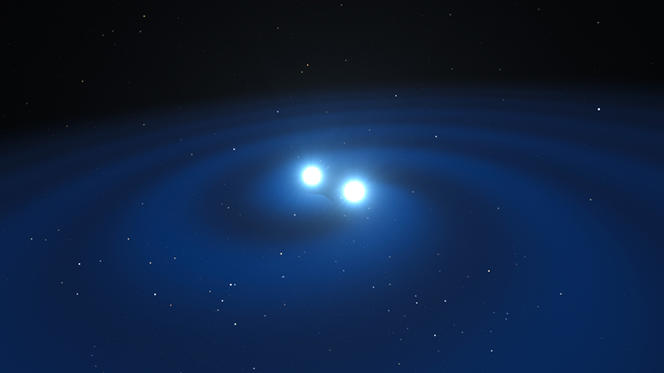 This artist’s impression shows two tiny but very dense neutron stars at the point at which they merge and explode as a kilonova. Such a very rare event is expected to produce both gravitational waves and a short gamma-ray burst, both of which were observed on 17 August 2017 by LIGO–Virgo and Fermi/INTEGRAL respectively. 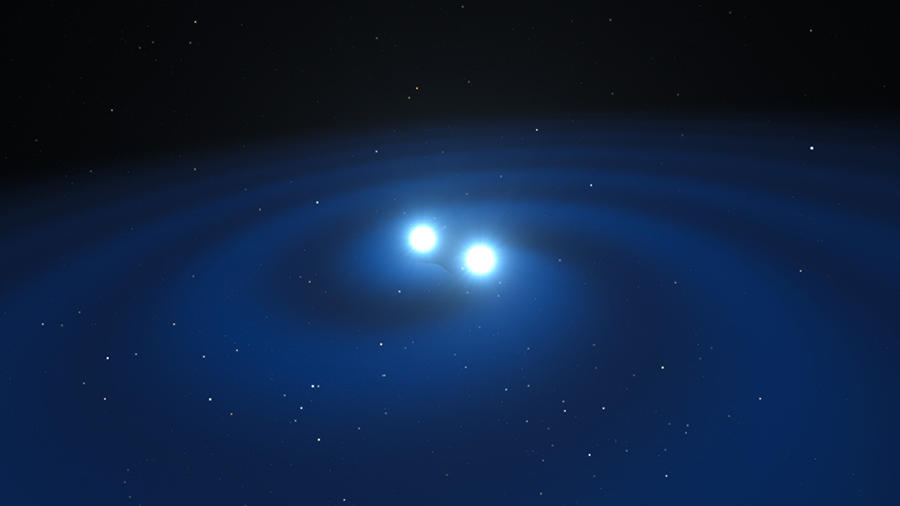 This artist’s impression shows two tiny but very dense neutron stars at the point at which they merge and explode as a kilonova. Such a very rare event is expected to produce both gravitational waves and a short gamma-ray burst, both of which were observed on 17 August 2017 by LIGO–Virgo and Fermi/INTEGRAL respectively.
ESO/L. Calçada/M. Kornmesser
ESO/L. Calçada/M. Kornmesser
Share
Share

A proof on a silver platter

But more was to come. On August 17, exactly 1.7 seconds after the LIGO-Virgo detectors captured their remarkable signal, the Fermi Gamma-ray Space Telescope in turn recorded what specialists call a short gamma-ray burst. In itself, there was nothing particularly unusual about this: such powerful bursts of ultra high-energy photons, which are detected by Fermi roughly once a week, have been observed since the 1960s, and it has been known for 25 years that they have an extragalactic origin. Except that the coincidence of two independent detections in the same region of the sky could only mean one thing: short gamma-ray bursts are caused by the merger of two neutron stars. "What was just a hypothesis is now a certainty based on a confidence level rarely encountered in astronomy," Dubus explains.

What was just a hypothesis is now a certainty based on a confidence level rarely encountered in astronomy.

Ironically, after several decades of doubt, the cosmos handed this piece of evidence to astronomers on a plate: although mergers of neutron stars emit gravitational waves in all directions, the gamma-ray burst that follows is normally confined to a cone-shaped beam measuring just a few degrees across. "We were incredibly lucky that the Earth just happened to be in its path," he adds. "It's amazing how cooperative Nature was!"

Astronomy on the global agenda

As always when Fermi detects a gamma-ray burst, an alert was immediately sent out to other observatories around the world, so that they could attempt to observe the phenomenon optically over a wide range of wavelengths. However, Fermi's resolution of around 1 000 square degrees meant that for astronomers it would have been like looking for a needle in a haystack, and the alert would probably have had little impact.  Fortunately however, not only was LIGO-Virgo able to reduce this area to a mere 30 square degrees, but it also provided an accurate estimate of the distance of the phenomenon, encouraging astronomers the world over to leap to their telescopes.

And twelve hours after the merger, by the time night had fallen in South America, the 1M2H team using the American Swope telescope in Chile announced they had discovered a new bright point of light located precisely in the NGC4993 galaxy, 130 million light-years from Earth. Other teams immediately confirmed the finding. Observations continued for around two weeks during which astronomers saw the emission shift from blue to red and gradually fade, while radio emissions were recorded about one week after the beginning of the event. There could be no doubt. This was the first time that a kilonova had ever been observed.

Telescope optical and near-infrared images of the neutron star merger. The left image is from 11 hours after the LIGO/Virgo detection of the gravitational wave source, and contains the first optical photons of a gravitational wave source. Four days later (right), it faded significantly and its color became much redder. These observations show that heavy elements like gold and platinum were created in the neutron star merger.

Telescope optical and near-infrared images of the neutron star merger. The left image is from 11 hours after the LIGO/Virgo detection of the gravitational wave source, and contains the first optical photons of a gravitational wave source. Four days later (right), it faded significantly and its color became much redder. These observations show that heavy elements like gold and platinum were created in the neutron star merger.
1M2H/UC Santa Cruz and Carnegie Observatories/Ryan Foley
1M2H/UC Santa Cruz and Carnegie Observatories/Ryan Foley
Share
Share

So just what is a kilonova? According to numerical simulations by astrophysicists, when two neutron stars merge, part of the very hot, dense matter of which they are made is ejected from the system, giving rise to light emission of a very specific kind. "Infrared emissions detected in 2013 were thought to be from a kilonova, but the observation was only very indirect," Dubus says. "This time, we were able to follow the entire sequence at every wavelength, thanks to an unprecedented effort by astronomers."

These results provide our successors with 100 more years of work!

Which was just as well, since obtaining evidence that this phenomenon is real is of vital importance. As Dubus explains, "according to models, a host of nuclear reactions take place inside the very neutron-rich ejecta, forming heavy elements through a nucleosynthesis mechanism unlike any other."

In a word, kilonovae are the best way of explaining the synthesis of elements heavier than iron in the Universe.  The problem was that, until now, kilonovae only existed in theory. "It's pretty amazing to think that the gold in the wedding ring you might be wearing was formed in the ejecta from the merger of two neutron stars," Dubus smiles.

So in just a few days, thanks to a series of observations on an unprecedented scale in terms of the resources deployed, astronomers have in one fell swoop achieved a first in gravitational astronomy, confirmed the origin of a phenomenon observed for more than fifty years, and solved the puzzle of heavy elements. And last but not least, LIGO-Virgo's very accurate estimate of the distance of the source, coupled with the measurement of the redshift of the associated electromagnetic emissions, has provided cosmologists with a new way of measuring the rate of expansion of the Universe. This could eventually help to refine the widely varying estimates of the value of this parameter, derived from data obtained by different methods. Nearly 30 years after he first presented his project for a gravitational interferometer, Brillet is still in awe: "These results, which mark the birth of multi-messenger astronomy, prove that our work was not in vain. And they provide our successors with 100 more years of work!" Huge indeed!

Article
Artemis: To the Moon and beyond
Physics

Article
Is ventilation the ultimate weapon against Covid-19?
Gravitational Waves