Home / Articles / Does the Enlightenment still shine in the 21st century?

Does the Enlightenment still shine in the 21st century?

Home / Articles / Does the Enlightenment still shine in the 21st century?

Does the Enlightenment still shine in the 21st century?

Archives Charmet / Bridgeman Images
Share
Share
The Age of Enlightenment is in the spotlight at the French pavilion at Expo 2020 in Dubai. The 18th-century movement generated a surge of technical and scientific progress in Europe, but did it also pave the way for the unbridled exploitation of science and technology? Without veering into complacency or facile criticism, the science historian Stéphane Van Damme offers a critical analysis.

You participated as a scientific advisor in the project for the ‘Light, Enlightenment’ French pavilion at the Dubai World Expo.1 What can you tell us about its content and purpose?
Stéphane Van Damme:2 A large part of the exhibition is devoted to scientific and technical progress from the 18th century to the modern day. From a historical point of view, the Age of Enlightenment is a time of questioning, and the Encyclopédie a summing up of two centuries of scientific revolutions in astronomy, natural history, the natural sciences, the earth sciences, mathematics, medicine, to name but a few. A great many discoveries and breakthroughs come to mind, such as the observation of Halley’s Comet, Newton’s law of universal gravitation, the classifications of species proposed by the naturalists Carl Von Linné and Georges-Louis Leclerc de Buffon, the scientific expeditions to confirm that the Earth is flattened at the poles or to measure the equator… All of this happened in the wake of the century when microscopes and telescopes came into widespread use. 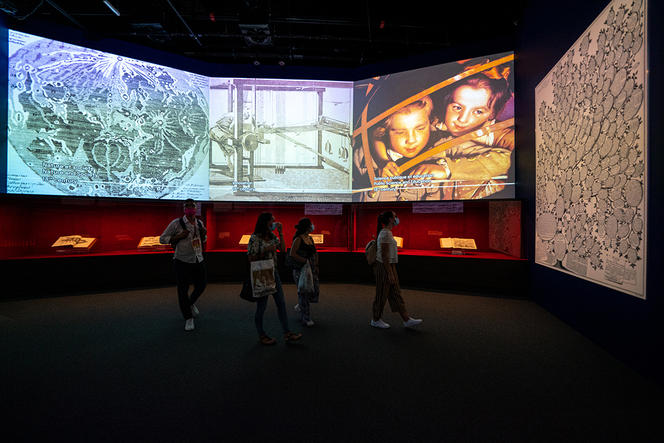 The “Light, Enlightenment” exhibition at the French pavilion at Expo 2020, open in Dubai through 31 March, 2022. 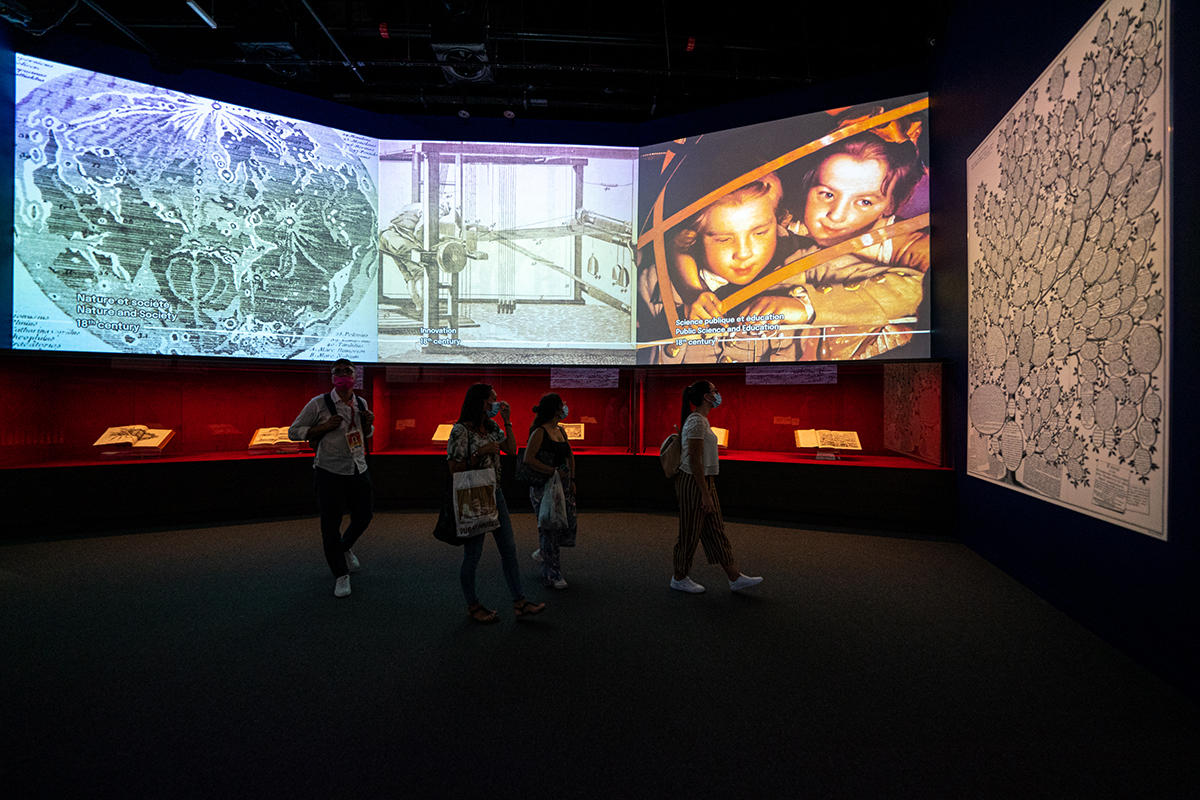 With this exhibition we want to show that, starting in the 18th century, a new kind of encyclopedism emerged that sought to formulate an overview of human knowledge and change its architecture. We also want to highlight the utilitarian aspect of the sciences, in connection with the public sphere, and to work with the concept of the Enlightenment as a scientific and technical realm of the imagination.

Beyond the scholars and their discoveries, the Age of Enlightenment brought the institutionalisation of the sciences, with a collective dimension and competing epistemologies…
S.V.D.: Yes, indeed. The Enlightenment was a plural European movement guided by a number of unifying principles – first in terms of institutions, with a revolution in the organisation of the sciences. The academies (the Académie des Sciences in Paris, the Royal Society in London), which first appeared in the 1660s, proliferated in the 18th century throughout Europe and in the colonies (Santo Domingo, Philadelphia, etc.). Scientific installations were created, like observatories (Paris, Greenwich) and botanical gardens to serve as inventories of the natural world, with specimens, samples and seeds brought back from distant lands. In parallel, the laboratories acquired the modern form that we associate with them today, allowing the development of experimentation. Communities of practice also emerged among experimenters and instrument-makers. Alongside Latin, vernacular languages became more prominent as scientific vectors. And the fields of research expanded: in the late 18th century, societies both near and far became a subject of scientific study in the form of what would later be known as ethnography or sociology. 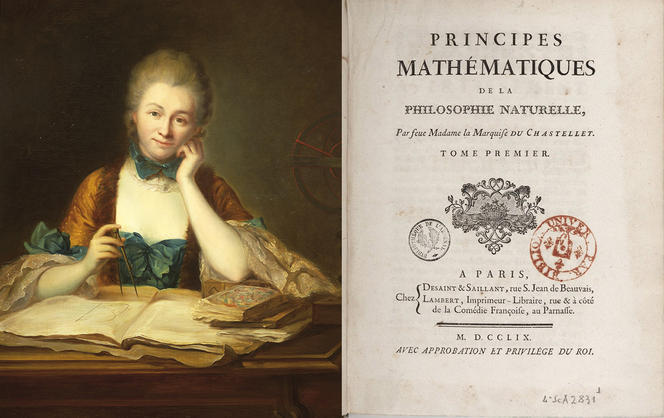 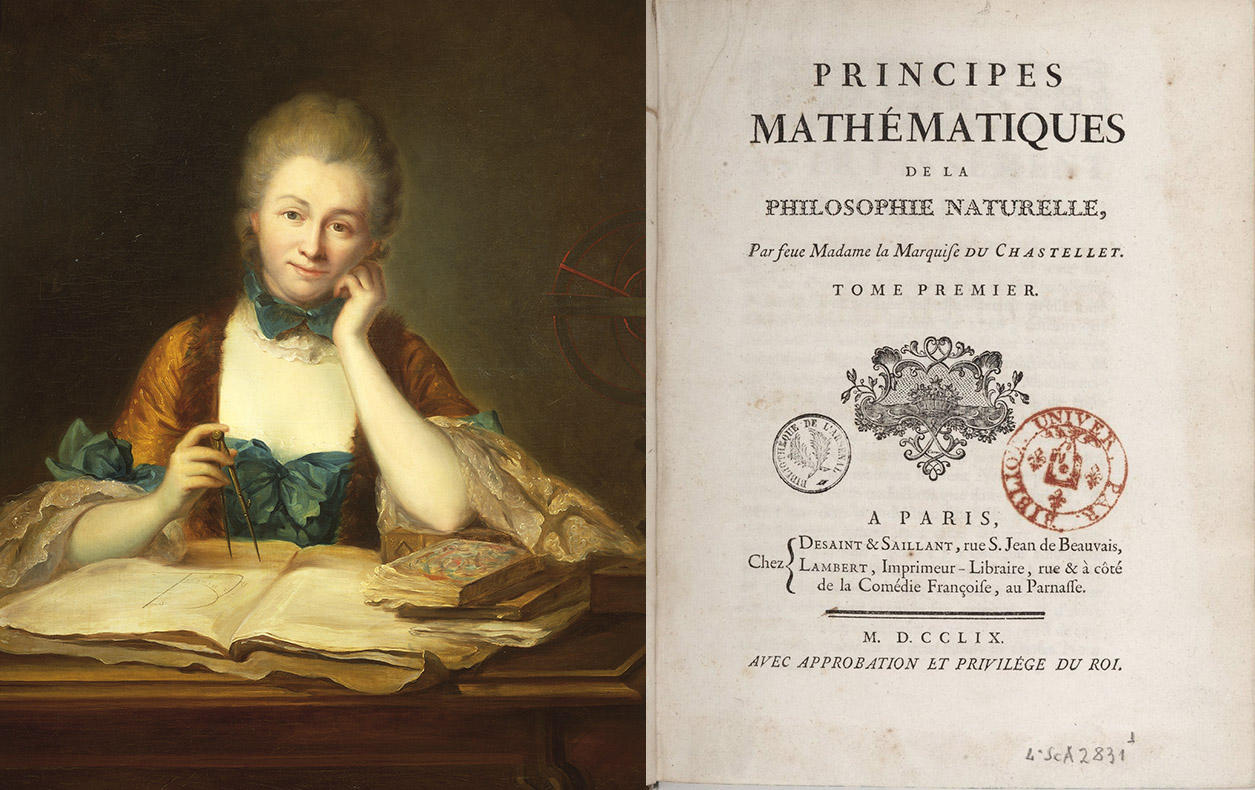 Did women play a role in these evolutions?
S.V.D.: Victims of a system founded on a principle of exclusion, women were not admitted to the academies, nor were they present in the universities outside of a few exceptional cases in Italy, like the mathematician Laura Bassi in Bologna. But starting in the 18th century, women in the aristocracy participated in discussion groups that also admitted men, and in this way practised the sciences. Great thinkers like Bernard Le Bouyer de Fontenelle (Conversations on the Plurality of Worlds), Jérôme de Lalande (Ladies’ Astronomy) and Francesco Algarotti (Newtonianism for Ladies) depicted women who acquired learning, albeit mostly from masculine sources. Other women played very active roles in the production aspects of the sciences, like Émilie du Châtelet, the earliest French translator of Newton, and Marie-Anne Lavoisier, who wrote reports on the chemistry experiments conducted by her husband.

Women were also active in fields in which they already held a prominent role, such as botany, as illustrators, nursery gardeners or herbalists. Yet in the publications, they often remained invisible. Still, the situation started to change during the Enlightenment. New studies and theses in the history of chemistry, astronomy and the natural sciences have given us a much more accurate perception of women’s contributions, which, prevailing prejudices notwithstanding, were not negligible. 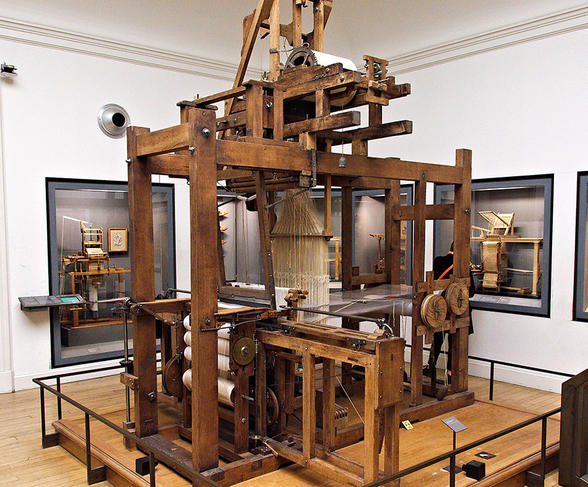 The first fully automatic loom, devised by Jacques de Vaucanson, a French machinist and inventor of many automata. A model from 1748 is included in the collection of the Musée des Arts et Métiers in Paris. 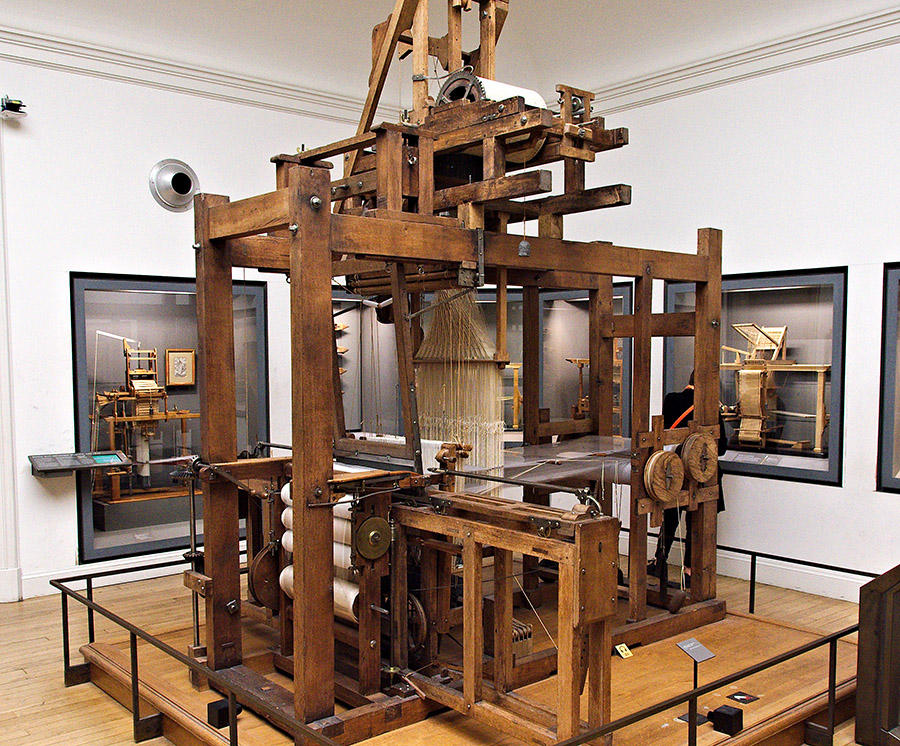 Every now and again, the Enlightenment is blamed for having opened the way for deadly technologies or the abusive use of the sciences by totalitarian regimes. What do you think of these accusations?
S.V.D.: Reactionaries in the 18th century accused the Enlightenment of upsetting the social, political and religious order of absolutism. In fact, the French Enlightenment was underpinned by the idea of an association between the sciences and social and political reforms. In addition, those who opposed it were suspicious of rationality, which in their view also had a sentimental facet, a vision of nature that defied the ‘reductionism’ of scientific naturalism. In the 20th century, accusations from the scientific community itself targeted the technicist vision of the sciences believed to have led to the creation of nuclear weapons and Nazi human experimentation. They associated the scientific rationality of the Enlightenment with godless science, in other words with no higher consciousness to guide it. But this is again a matter of interpretation, which changes from one era to the next. The excesses of science have been denounced since the 18th century. The fear of automata already indicated a kind of unease. The Enlightenment put forth a critical and reflexive vision of the limits of reason, as explained in particular by the German philosopher Kant in his Critique of Pure Reason. 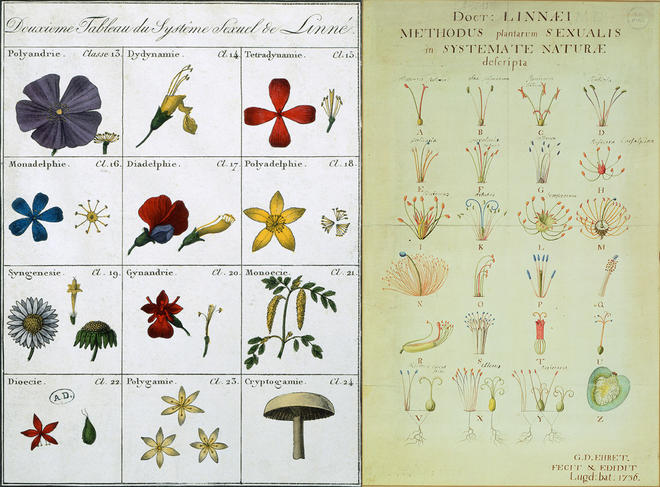 Depictions of the sexual systems of plants by the Swedish naturalist Carl Von Linné (1707-1771). 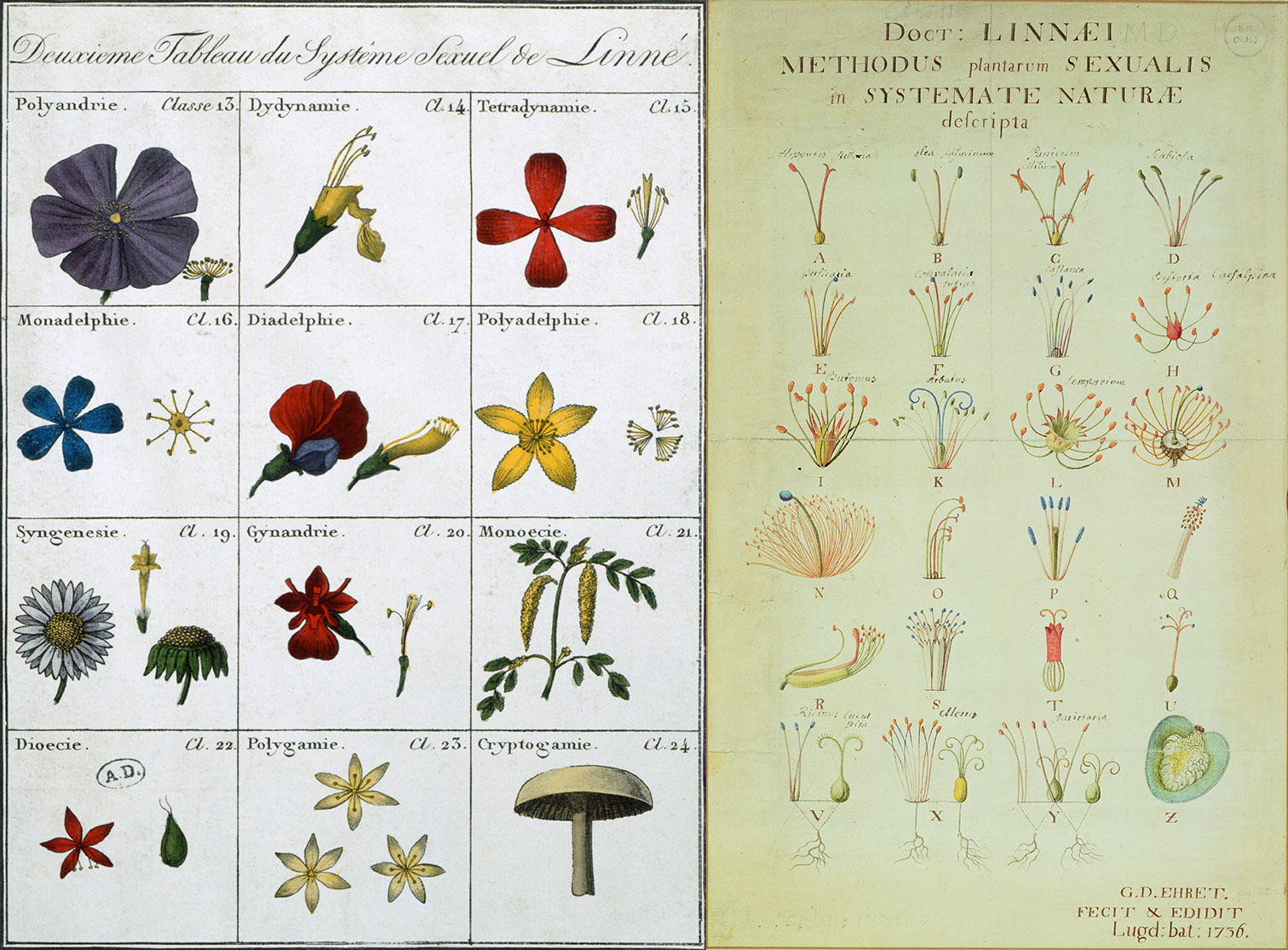 Today the Enlightenment is blamed for hastening the onset of the destructive Anthropocene era, even though scientists were already raising the alarm about the environment. What explains this ambivalence?
S.V.D.: Already during the period between the two world wars, criticisms were levelled against science for having strayed too far from nature. Today the ecological movement faults scientific rationality for being the root cause of the environmental crisis, since science is thought to have enabled the exploitation of natural resources on an unprecedented scale. In fact, as far back as the 18th century, Carl Von Linné in Sweden had asserted the idea that the sciences should serve the political economy. But, conversely, other scientists were already condemning this form of exploitation. Pierre Poivre and Jacques-Henri Bernardin de Saint-Pierre, naturalists posted in the colonies, denounced the exploitation of forest resources and pointed out the vulnerability of the environment in the tropical islands.

The Enlightenment has also been vilified for celebrating slavery and purported racial hierarchies…
S.V.D.: Today we know that a part of the scientific revolution was funded by income from the African slave trade. We are moving away from a scientific, triumphalist, patriarchal, racialist perception of the Enlightenment towards a more complex, fairer view that does not overlook the more controversial aspects, but puts them in context.
In fact, many scientific projects under the Ancien Régime were hampered by logistical limitations: the manpower and financial resources needed to bring them to fruition were not always available. The imperial sciences didn’t appear until the late 19th century, in parallel with the colonial system. In addition, the Age of Enlightenment also raised a debate on human diversity, pitting a form of racial hierarchisation against a universalist objective that considered, on the contrary, rationality to be a shared characteristic, and that sought to define a common humanity.
Some thinkers, like Nicolas de Condorcet, were abolitionists, while others, maintaining much more conservative positions, leaned toward a certain eugenics, with the idea of improving the races. Antoine Lilti highlights this dialectic in L’Héritage des Lumières (Seuil, 2019).

What role did the Enlightenment play in increasing openness towards other learned traditions?
S.V.D.: Curiosity about Asia was already keen in the Middle Ages, and continued in the modern era when missionaries, many of them also astronomers, were sent to Beijing. Science was used as a vehicle of European diplomacy to enter into contact with other empires in regions where Europeans were not dominant, whether in Africa, the Mughal Empire, China, Japan, etc. Although trade relations were also established, such contacts were not motivated solely by the desire to conquer new markets. In Humeurs Vagabondes (Fayard, 2003), Daniel Roche emphasises this mobility of the Enlightenment characterised by an opening to non-European scientific traditions, motivated by a philosophy of outreach and values founded on a form of cosmopolitanism.

What is the legacy of the Enlightenment today?
S.V.D.: The Enlightenment was founded on an ideal of emancipation through education and knowledge. In this day and age, with all the talk about artificial intelligence and the knowledge-based society, when everyone has access to online ‘encyclopedias’ and tutorials for self-teaching, we need to question the role of the sciences and scientists in our society. We are not in the same situation as in previous centuries, when modern science held a predominant position. Today’s context is far more complex and our society is much more open, with a vast community of science enthusiasts. All of these elements suggest reviving an agenda of emancipation through knowledge, in a more horizontal way than before. And – why not? – encouraging a new collaboration between the sciences and the general public. I think that the history of the sciences has a key role to play in this new Enlightenment.