Home / Articles / Archaeologists Back in Mesopotamia

Archaeologists Back in Mesopotamia

Home / Articles / Archaeologists Back in Mesopotamia

Archaeologists Back in Mesopotamia

After a 30-year absence, French archaeologists were once again present this spring at the large site of Larsa (200 hectares) in Lower Mesopotamia (Nasriyah Governorate in Southern Iraq).
Régis Vallet/IFPO-CNRS
Share
Share
Recent years have seen the return of French archaeological missions to Iraq. A project launched last spring plans to use innovative cartography techniques to help Iraqis conserve their heritage.

Many Iraqi archaeological sites have suffered greatly in recent years. In 2003, the country’s rich heritage was badly affected by the combat and bombardment of the US military intervention. Between 2011 and 2017, the systematic destruction and pillaging of certain sites by Daesh only amplified the degradation of this invaluable patrimony. With the political situation seemingly calmer today, France has strengthened its ties with the Iraqi government through archaeological research.

This partnership was concluded in May 2019 with the Solidarity Fund for Innovative Projects (FSPI) scheme entitled “Revitalising the Promotion and Development of Iraq’s Archaeological Heritage.”1 “In today’s post-conflict environment, in which Iraq must contend with the reconstruction and management of a heritage that has suffered extensive deterioration, a key issue is providing the skills and technologies the country needs to meet these challenges,” says Laurence Auer, Culture, Education, Research and Network Coordination Director at the Ministry for Europe and Foreign Affairs.

The project will rely on the expertise of the companies Archaïos and Iconem in order to create a digital archaeological map covering the entire territory of Iraq. This digital tool, which can be accessed and amended in Baghdad by all Antiquities Departments, can also be updated by each of Iraq’s nineteen governorates, the regional institutions in charge of local development. 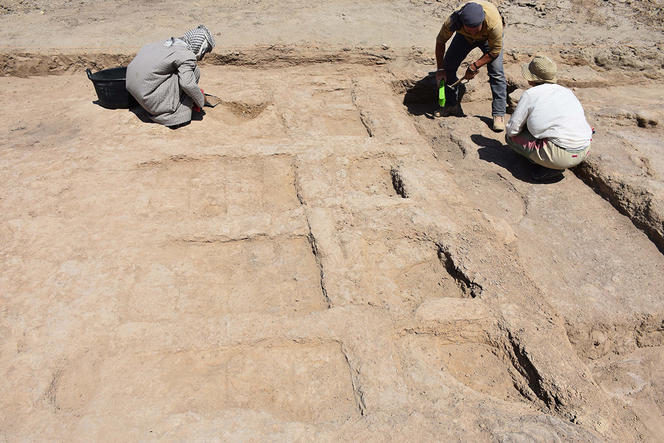 Archaeologists from the Larsa-Oueili mission led by Régis Vallet unearthing a granary dating back to the seventh millennium BC at Tell el ’Oueili. Located 3 km from Larsa, it is the oldest site in Southern Iraq. It has remained intact for thirty years, and is once again available for excavation. 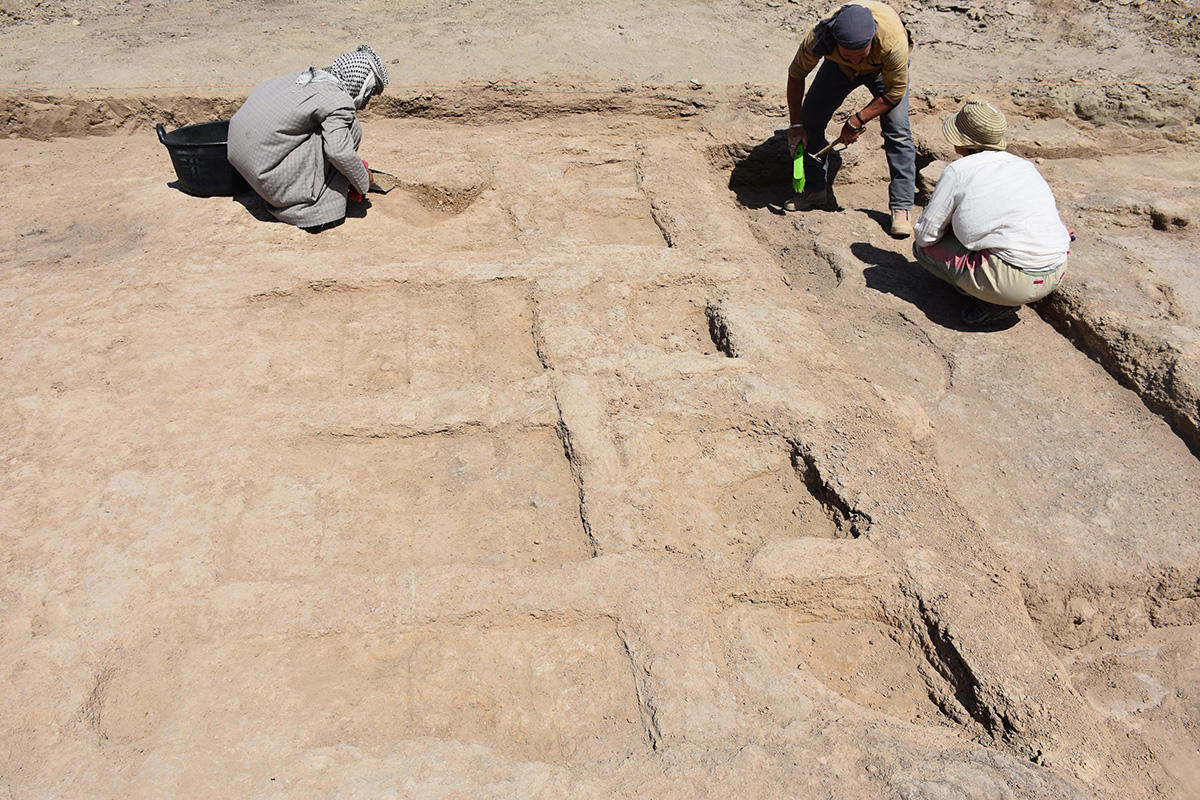 Archaeologists from the Larsa-Oueili mission led by Régis Vallet unearthing a granary dating back to the seventh millennium BC at Tell el ’Oueili. Located 3 km from Larsa, it is the oldest site in Southern Iraq. It has remained intact for thirty years, and is once again available for excavation.
Régis Vallet/IFPO-CNRS
Régis Vallet/IFPO-CNRS
Share
Share

The FSPI also provides an opportunity to strengthen ties between Iraq and France, in connection with sites historically explored by French archaeologists from the second half of the nineteenth century. Abruptly abandoned from the 1990s for security reasons, some of them have once again seen excavation campaigns. “This two-year project will enable in-depth study of twelve sites, thanks to innovative analysis and modelling techniques,” explains Dominique Pieri, Director of the Department of Archaeology and History of Antiquity at the IFPO,2 and coordinator of the FSPI.

The sites that will be investigated include Dur-Sharrukin, one of ancient Assyria’s major cities, located near the modern-day village of Khorsabad. Organising an excavation campaign in this area, which was under Daesh control just a few months ago, remains a difficult endeavour. Dur-Sharrukin will require prior demining. Once the area is secured, the archaeology mission led by Pascal Butterlin, Professor at the Université Paris 1 Panthéon-Sorbonne, will be carried out under the close monitoring of French and Iraqi soldiers, due to the proximity of the frontline with the last Daesh combatants. 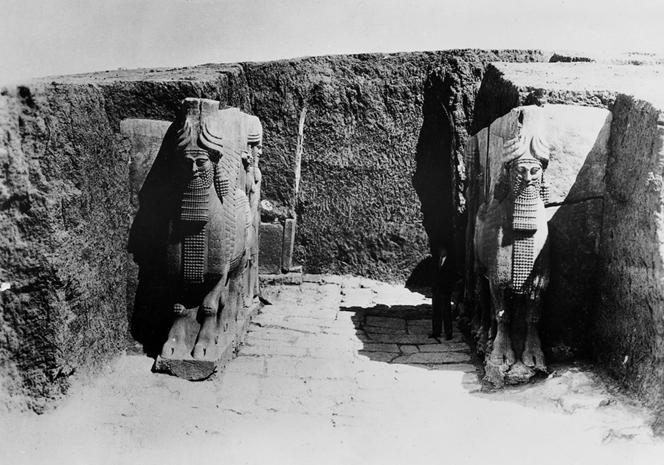 In 1934, an expedition conducted by the Oriental Institute of the University of Chicago unearthed the city of Dur-Sharrukin (Kurdistan). The excavated gate, which was built by King Sargon of Assyria, is flanked by two winged creatures with a human face and bull’s body. An archaeological mission will be conducted there shortly, once the area is secured. 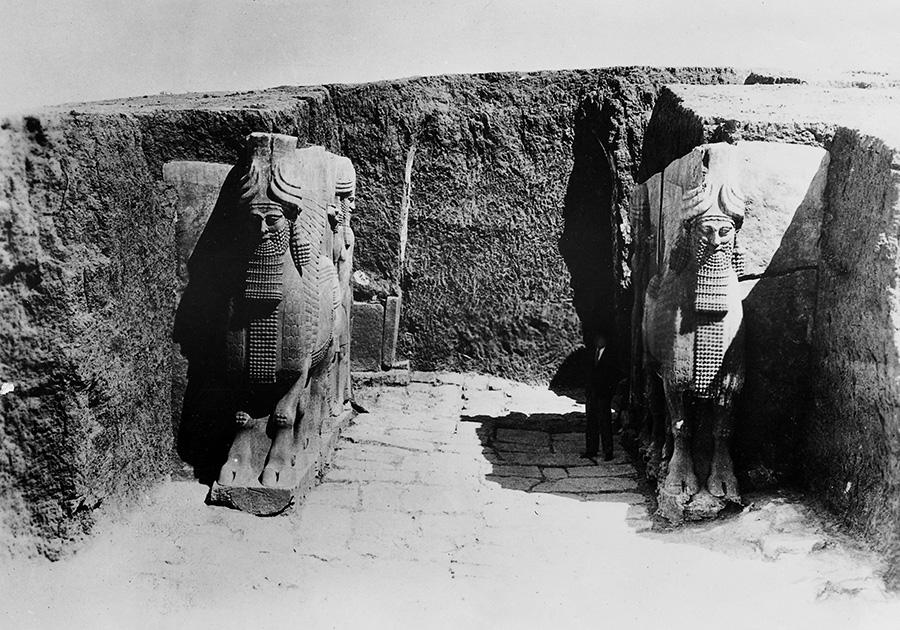 In 1934, an expedition conducted by the Oriental Institute of the University of Chicago unearthed the city of Dur-Sharrukin (Kurdistan). The excavated gate, which was built by King Sargon of Assyria, is flanked by two winged creatures with a human face and bull’s body. An archaeological mission will be conducted there shortly, once the area is secured.
SZ Photo / Scherl / Bridgeman Images
SZ Photo / Scherl / Bridgeman Images
Share
Share

Collecting as much information as possible

“This crisis archaeology, involving an inventory of the site—which has suffered numerous instances of pillaging over time—is unprecedented for archaeologists like us,” Dominique Pieri observes. “It is nonetheless essential, for only by precisely identifying the nature and scope of the damage will we be able to retrieve as much information as possible.” Larsa, located in the south of the country, is another internationally renowned heritage site being studied as part of the FSPI. The French teams are led by Régis Vallet, a CNRS researcher at the IFPO in Iraq.

Located between the Tigris and Euphrates rivers, this former capital of Mesopotamia was founded more than 5,000 years ago. In May 2019, the company Iconem carried out initial photogrammetry analysis of the millennia-old remains. “This method combines images taken on the ground from different angles with aerial photographs taken by a drone, producing a 3D model of the site at a specific time,” explains Bastien Varoutsikos, an archaeologist by training and Director of Development at Iconem. This sort of carbon copy of the Larsa site can be compared to previous satellite images of the area to measure the impact of successive pillaging. Iconem plans to produce digital copies of seven other Iraqi sites over the next two years.

3D reconstruction of Larsa by the company Iconem.

This cartographic and analytical tool will be made available to the Iraqi authorities in the months to come, in an effort to help improve the management of other archaeological digs made vulnerable by years of war. “Because it provides an overview of a site of interest while focusing on certain emblematic areas, photogrammetry could be used to raise awareness among the Iraqi public of the wealth and fragility of its heritage,” the scientist adds.

Finally, training plays a highly important role in the FSPI project. Local heritage conservation professionals will be taught how to use the digital technologies developed by Iconem and Archaïos, including the 3D reconstruction of archaeological sites. A Master’s degree in Heritage Studies centered on restoration methods will be created by 2020 at the Universities of Baghdad, Mosul, and Erbil, with support from the IFPO, the Musée du Louvre, and the Lebanese University in Beirut: “In a country where more than half of the population is under 19 years old, it is crucial to focus on training this young generation, so that it can actively contribute to the reconstruction of the territory through the conservation and development of its heritage,” concludes Laurence Auer.

See author's bio
CNRS technologies at the CES 2020Previous
How Long Have we Been Talking?Next

Article
The Music of Antiquity