The great temple dedicated to the worship of the sun disk Aten, in Amarna. The capital city built by Akhenaten was completely destroyed following his death.
ARCHEOVISION
Share
Share
Pharaoh Akhenaten imposed a single religion, based on the worship of the sun disk “Aten,” and built a new capital city, Amarna, using entirely new architectural techniques. For the first time, researchers were able to reproduce 3D models of some of its buildings.

Considered by some as a mystic and by others as a cunning politician, pharaoh Amenhotep IV, also known as Akhenaten, completely revolutionized New-Kingdom Egypt during his reign (1350-1334 BC). Not only did he cause religious upheaval by imposing the monotheistic worship of the sun disk, Aten, versus the pantheon of deities worshiped by previous pharaohs, but he also brought about a true architectural and artistic revolution. “Because Aten, the sun disk, became the only God to converse with, temples were built without roofs, bathed by the ‘divine rays,’” explains Robert Vergnieux, former director of the Archéovision Laboratory1 and steward of an ongoing Akhenaten exhibition in Bordeaux.2

Because the walls no longer had to support heavy, ten-to-twenty ton roof slabs, a new architectural standard was established: the huge blocks of stone previously used to erect temples and royal edifices were replaced by standard-sized stone bricks—Talatats—which had the advantage of being quicker to build with.

A capital wiped off the map

The technique was first tested at Karnak, the religious complex situated to the north of Thebes, before being used on a large scale in Amarna, the new capital built by Akhenaten. The main problem for the specialists was that nothing remains of these buildings in Karnak or Amarna. Indeed, Akhenaten’s “whimsical” religious and architectural ideas had made him enemies. “No sooner had he died, than the clergy of other religions, notably those of Amon who were very powerful, systematically erased all traces of his reign,” says Robert Vergnieux. Amarna, Akhenaten’s capital, was razed to the ground, the royal tombs were destroyed and most of the calcareous bricks were used to make lime. At Karnak, the sandstone blocks survived but were reused in later constructions, notably in the foundations of pylons.

The scientists of Archéovision therefore had a real puzzle on their hands to imagine the shape and form of the temples, palaces and other houses of dignitaries under the reign of Akhenaten. But they did not have to start from scratch: “2D reconstructions of several buildings, notably at Karnak, had already been proposed and I had formulated several hypotheses during my PhD work on Amarna,” Vergnieux explains. The team also had access to a vast—albeit very heterogeneous—documentary database: Amarna was destroyed, but steles describing its spatial layout were found on the edges of the town, and all foundations have survived, as have scenes decorating the tombs of ordinary people…  At Karnak, almost 12,000 “Talatats” have been found with fragments of decoration on one side, which made it possible to reconstruct hundreds of partial scenes that once decorated the walls of temples.

Egyptian iconography to the rescue

“Under Akhenaten, temple iconography changed drastically,” explains Vergnieux. “Until this point, it mainly showed scenes of the pharaoh and a divinity in a variety of religious situations. In the worship of Aten, the sun disk, the pharaoh gradually morphed into this single god and scenes of his own everyday life started to be represented on the walls of temples.”  These and other constructions were also depicted, providing Archéovision, with a valuable source of information about their appearance.

Egyptian iconography might look disorganized to our 21st century eyes used to perspective—doors seem to “float” above walls, etc. Yet for Vergnieux, there is no doubt that it is in fact extremely precise, but follows a radically different set of rules that had to be decoded. “The Egyptian artist represented each element of a scene from its best angle so as to provide the maximum information. Thus, a single scene contained different points of view: a door would be shown in profile allowing a series of rooms to be viewed in a row, even if these rooms would not be directly visible from outside the building.” 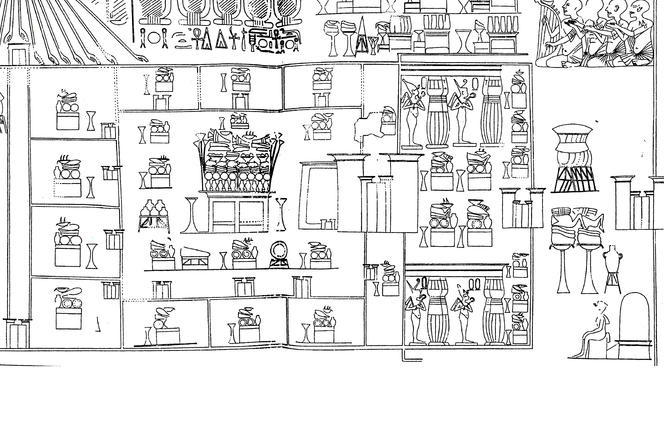 Egyptian scenes such as these (the sanctuary of the temple of Aten in Amarna) were used as a documentary database by the researchers. 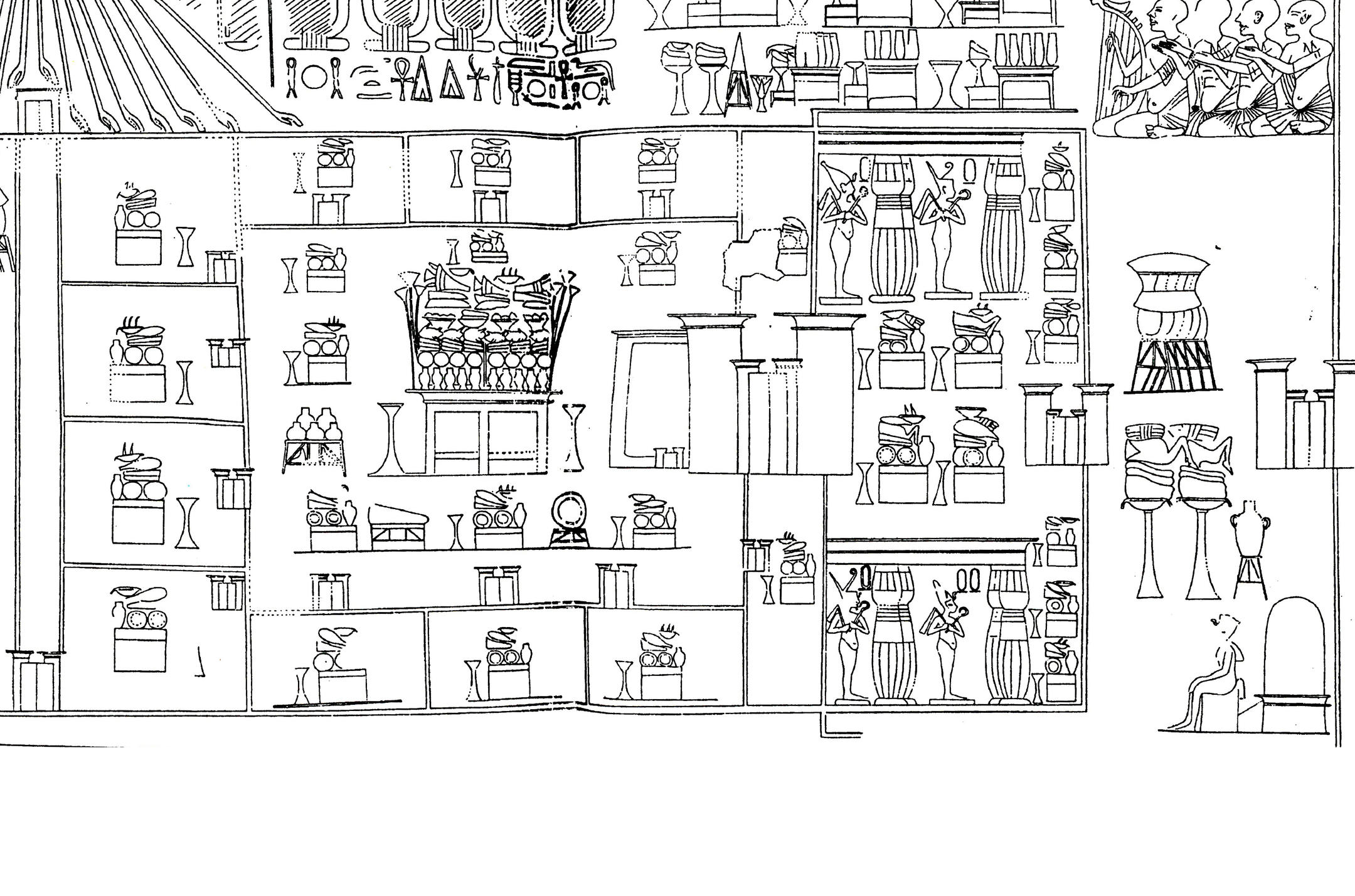 Egyptian scenes such as these (the sanctuary of the temple of Aten in Amarna) were used as a documentary database by the researchers.
ARCHEOVISION
ARCHEOVISION
Share
Share

In addition to its representative function, the 3D application developed by Archéovision has proved a useful research tool for this reconstruction. “For each building, several versions were proposed and submitted to partner Egyptologists in the project,” says Loïc Espinasse, a 3D engineer at Archéovision. This held a few surprises in store. For example, it has been shown that the courtyard of Gem-Pa-Aton, a temple to Aton built to the east of the Karnak complex, underwent significant modifications. “It is generally accepted in the literature that it was a courtyard bordered by a colonnade. But the inconsistencies in structure highlighted by the 3D application revealed that what were previously thought to be the bases of columns were in fact pedestals for giant statues of Akhenaten,” says Vergnieux. Enough to radically change the appearance of the temple!

Thousands of Talatats still need to be put together to reconstruct new decorative scenes.

Thanks to 3D, the large and small temples of Amarna could also be reconstructed "virtually," as could two houses of dignitaries. These were imposing buildings covering nearly 4000 square meters, with two levels and a luxurious garden. One of these mansions, not presently on show at the exhibition in Bordeaux, was the property of Thutmose, the sculptor who made the bust of Nefertiti (Akhenaten’s first wife), a famous artefact kept at the Neues Museum in Berlin. A 3D map of the town has also been produced, situating the temples and palaces, as well as the residential neighborhoods and warehouse areas.

The project is far from over though: another ten thousand Talatats, unearthed in the foundations of the 9th pylon at Karnak, need to be put together so as to reconstruct new decorative scenes. To do so, the Archéovision laboratory has just launched a vast crowdsourcing project to encourage the public to get involved.3 The keenest are welcome to decipher the handwritten notes of archaeologists, who catalogued thousands of Talatats at Karnak in the 1970s and 1980s, and enter these figures in a giant database. These distribution data, showing where each Talatat was found, could still hold interesting surprises for the archaeologists.

See author's bio
Ramanujan: The Man Who Knew Infinity Previous
Navigating the Crowd with SPENCER Next

2 comments
RSS feed
Thank you for this article and thanks for having the information brought forward to people's attention. I would like to make few notes on what I believe to lie behind the story of Akhenaten and Nefertiti, their relationship and their impact on our current world. First off, I would like to say that as human beings being brought by a physical reality, we often make the mistake to think that everything given to us in a subtle form can and should be translatable to a physical expression. It is probably going to sound unbelievable to some, but from my personal experience I assumed Akhenaten and Nefertiti to be a dual consciousness expression of what we have decided to call the God Representatives responsible for the world we live in today. In this way can be understood that they manifest in our subtle lives by being an expression of a duality of consciousness - male female, a couple in an union in every person's existence and life form. This is the base of what we also have managed to call Christianity, where by we believe that Jesus and Mary are people, and we have decided to worship each or one of them separately from the other, while in their original form they are always a unity of two complementing one another expressive forms of a God-consciousness. For those of us inclined to think in computer or in a digital form, we can parallel the city with our internal reality, a city, a mother-board type of a structure, manifesting very really in our subtle bodies; the walls can be seen as constructs of a vibratory nature, or compact units of consciousness, existing inside our bodies, in organs and within their governing connecting channels, the water and the plant forms as manifestation of something 'plated' for a life of development, much like we plant physical plants with a hope for them to develop and give us fruits, and so on. That also explains why the city structures have 'no roofs' and such thick walls which would make otherwise no sense in practical architectural terms. Many people believe there is an invisible temple, a white brotherhood, and so on, and in that line of thought, one can understand that the city of Akhenaten and Nefertiti is something very similar to a consciousness construct within which our development as human and life species can be seen manifesting in a plant or in an information form. In China the duality exists as Yang ( male ), White and Yin ( female ), Black. In a piece of paper this can be translated into a white background which may be substituted with the black digital space of a program ( being also an empty space, a female, a womb, yin, potential ), over or inside of which we draw with inc, with digital lines, etc. as the manifestation of a life form ( material, a male, yang , or potential being manifested, fullness ). Many people speak also of guardians, guards, keepers of knowledge and development, and by each of those gate one can imagine a threshold, passing over which one enters a next stage or level of development. In that sense no body has been kept limited, or has been considered undeserving, although our history can attest for the attempts of humans to limit their brothers and sisters, wives and children, to grasp something that cannot be contained by a limited human consciousness development. I believe all i have written with words is contained inside the work being presented to us here. Thank you!
Or they might just have been a Pharaoh of Egypt and his Queen, who built their new capital taking into consideration the need for the Aten to be accessible in the city's ritual spaces - hence, no roofs on them. The homes, palaces etc had roofs. The use of the talatats also enabled the city to be built quickly - which was probably also a serious consideration. Akhenaten was probably as eager to leave the ancient capital as the priests there were eager to see him go. There is ample evidence that Amarna was built in some haste.
To comment on this article,
Log in, join the CNRS News community
Log in
Register