The physicists Fritz London (right) and Erwin Schrödinger, in Berlin in 1928. Ten years later, Fritz London, fleeing Nazi Germany, will take refuge in Paris before his exile to the United States.
Collection privée L.Tisza/DR
Share
Share
In his new book, the physicist Sébastien Balibar tells the story of the encounter in Paris of the Hungarian László Tisza and the German Fritz London, two scientists who fled Nazism, and their subsequent exile to the United States. He shows how scientific research was able to result in groundbreaking discoveries despite anti-Semitism and the turmoil of the Second World War.

You are a physicist, and it was your work on the superfluidity of helium that led you to take an interest in the work of László Tisza and Fritz London, two Jewish scientists who fled Europe in the 1930s, and who are central to your book. In what way was their discovery historic?
Sébastien Balibar:1 My interest in superfluidity dates back to my PhD. As a young student at the École Normale Supérieure (ENS), I was looking for a research subject and I discovered that, at extremely low temperatures, liquid helium evaporated in a very specific way that could be explained by the photoelectric effect, which had won Albert Einstein his Nobel Prize in 1921.

Spurred on by my achievement, I had become interested in this strange liquid, known as a superfluid. It was given this name when in December 1937, both at Cambridge and Moscow, it was found to flow at high speed through the tiniest slit or narrowest microtube, as if it had no viscosity at all. Neither oil nor water, nor any normal liquid can flow in this way. I then discovered that in March 1938, the German Fritz London and the Hungarian László Tisza, two physicists who had fled anti-Semitism in their respective countries to take refuge in Paris, had unlocked the secret of this fluid’s strange behaviour: it turned out that modern quantum physics could explain not only the microscopic characteristics of the inner structure of atoms, but also the macroscopic properties of matter visible to the naked eye. This finding was of fundamental importance, since quantum physics was to prove essential for understanding metals, super- and semiconductors, magnetism and so on, playing a key role in much of modern physics and technology.

As for many European scientists at the time, their research, first in France and then in the US, was carried out against the backdrop of Nazism and anti-Semitism. Is that what particularly impressed you?
S.B.: Absolutely. I wondered how these two scientists exiled in France had been able to ponder these matters, given the turmoil of the times. By the year 2000, Fritz London had been dead for forty-six years, but László Tisza, at 93, was still active at the famous Massachusetts Institute of Technology, the MIT, in Boston. I managed to get in touch with him through the Internet and we started exchanging information about the story of his discovery. I subsequently invited him to Paris, to the places where he had worked. I eventually found out that, at the time, an immigrant biologist called Louis Rapkine had joined forces with courageous intellectuals—including several professors at the Collège de France—to found a reception committee to welcome foreign refugees, with the support of the Popular Front government and financial backing from several sponsors. This enabled them to offer a scholarship to the incoming immigrants until such time as they were able to find more stable employment. 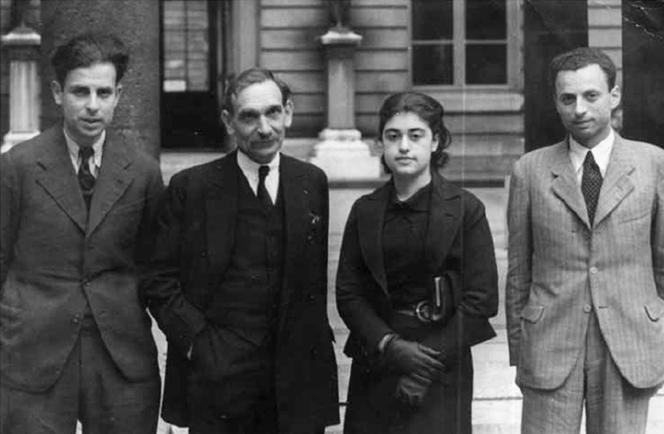 Hungarian physicist László Tisza (in light suit) at the Collège de France in 1938, alongside physicists Michel Magat, Edmond Bauer and their student Lydia Ochs (from left to right). 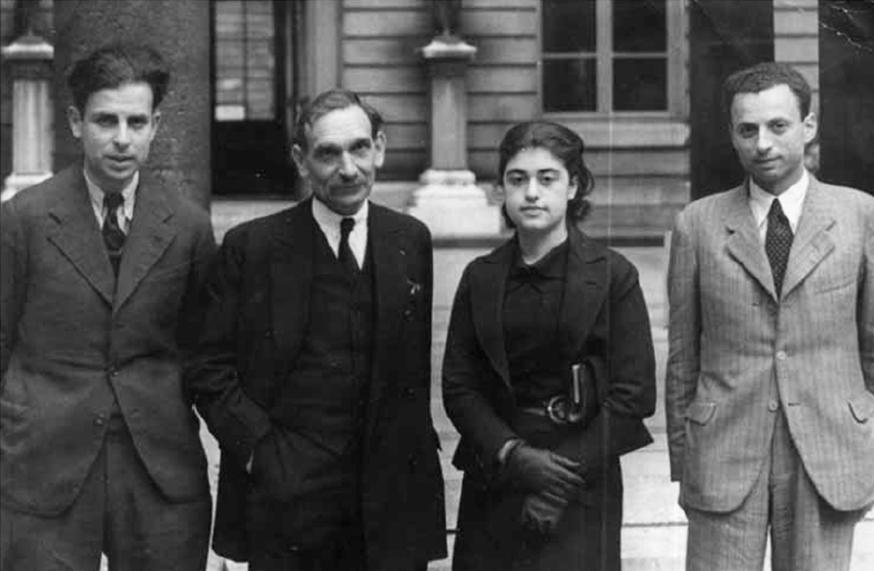 Given the context, how were London, Tisza and other scientists able to focus on their work and make a breakthrough discovery?
S.B.: The French physicist Jean Perrin’s endeavours to set up the National Fund for Scientific Research proved crucial as—unlike universities which only recruited French nationals—this Fund (which was to become the National Centre for Scientific Research, CNRS, in 1939) made it possible to hire foreign scientists. Jean Perrin had been appointed under-secretary for scientific research in the Popular Front government, which only remained in power for a year. As of April 1938, the Daladier administration created internment camps for foreigners, which were gradually turned into concentration camps, from where many inmates were eventually deported to Auschwitz. Long before the Vichy government came to power, France imposed numerous restrictions on foreigners, especially those considered Jewish.

And despite everything, their research continued to progress…
S.B.: Yes, because prominent French scientists such as Jean Perrin, Paul Langevin, the Joliot-Curies, Jacques Hadamard and many others lent them a helping hand, which may have relieved the burden of these restrictions. London was extremely worried—Tisza a little less apparently. They had to flee again: London left on the day war broke out in September 1939, while Tisza waited as late as March 1941. Both risked their own lives and those of their families. 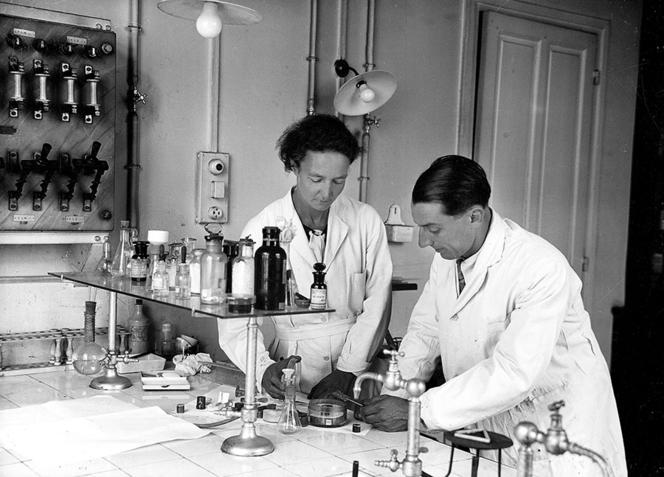 Irène and Frédéric Joliot-Curie in their laboratory at the Radium Institute in 1934. Like several of their colleagues, the Joliot-Curies helped Jewish scientists who had taken refuge in France as the Second World War drew near. 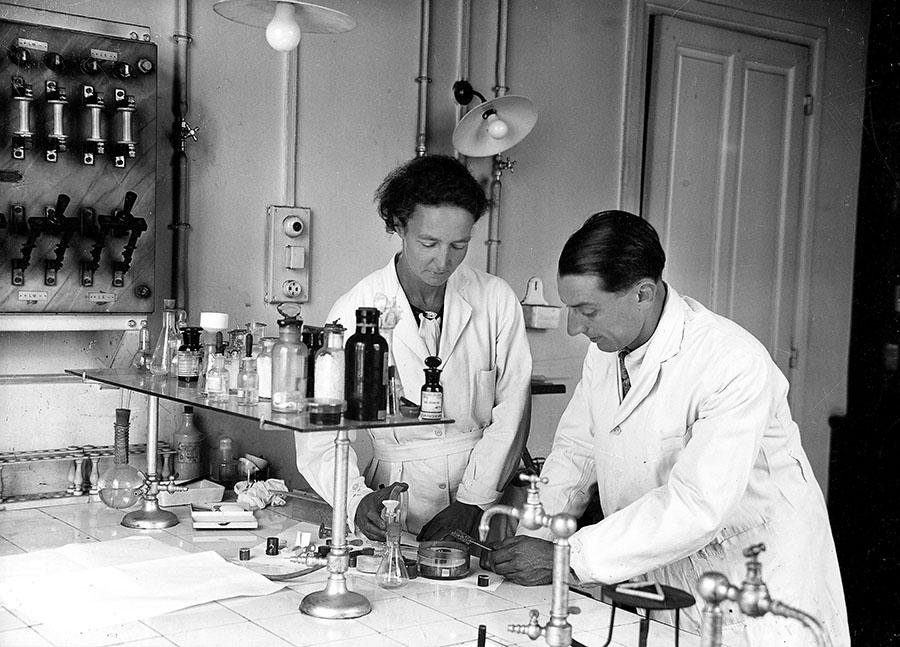 You mentioned the political dimension of research: what do you think of France's position at that time?
S.B.: The first thing to bear in mind is that although these refugees applied for French citizenship, they only managed to obtain it much later. Under serious threat in France as foreign Jews, they wanted to both thank those who had helped them and protect themselves by showing their support to the French State by joining the Foreign Legion or taking part in military research. This was the case for Tisza, but also for a number of refugees.

However, this was also a time when other immigrant scientists (Lise Meitner and her nephew Otto Frisch, and then Rudolf Peierls) had succeeded in understanding a phenomenon that was to take on huge global importance: nuclear fission. At the same time, Joliot-Curie had demonstrated the existence of chain reactions when uranium-235 was bombarded with neutrons. He had filed several patents on that matter, but the invasion of France by the Wehrmacht put an end to his research. Moreover, since the French were governed by collaborators of Nazi Germany, they were considered enemies and therefore excluded from any military cooperation with the United States. Frédéric Joliot remained in France, but joined the Resistance and prevented the Nazis from using his cyclotron to study nuclear reactions.

How did the Allies first hear of the potential development of an atomic bomb by the Nazis?
S.B.: Although Otto Frisch and Rudolf Peierls were also seen as foreign enemies by the UK in 1939, they alerted the British government to the huge risk that Nazi Germany might make an atomic bomb. Albert Einstein, Leó Szilárd, Edward Teller and Eugene Wigner subsequently drew President Roosevelt's attention to the same danger. These four scientists were also immigrants—one from Germany and three from Hungary—who did not have US citizenship. This is what led to the launch of the Manhattan project in the US, which saw the development of two types of atomic bomb. After a terrifying test in the New Mexico desert, Leó Szilárd, Eugene Wigner and many other scientists called for deterrence to be limited to demonstrating the power of atomic weapons, without actually bombing the Japanese population. However, President Truman, who had replaced Roosevelt in April 1945, decided otherwise and ordered a uranium bomb to be dropped on Hiroshima in early August 1945, followed by a plutonium bomb on Nagasaki. He apparently wanted to win the war against Japan ahead of the Soviet Union. 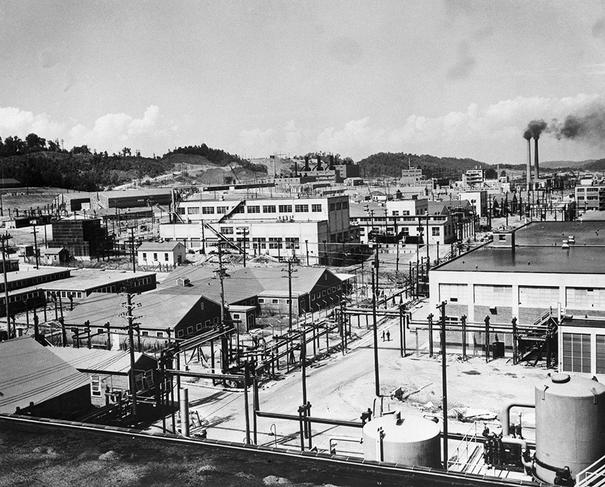 A Manhattan Project plant in Tennessee (US) for the production of atomic bombs during the Second World War. 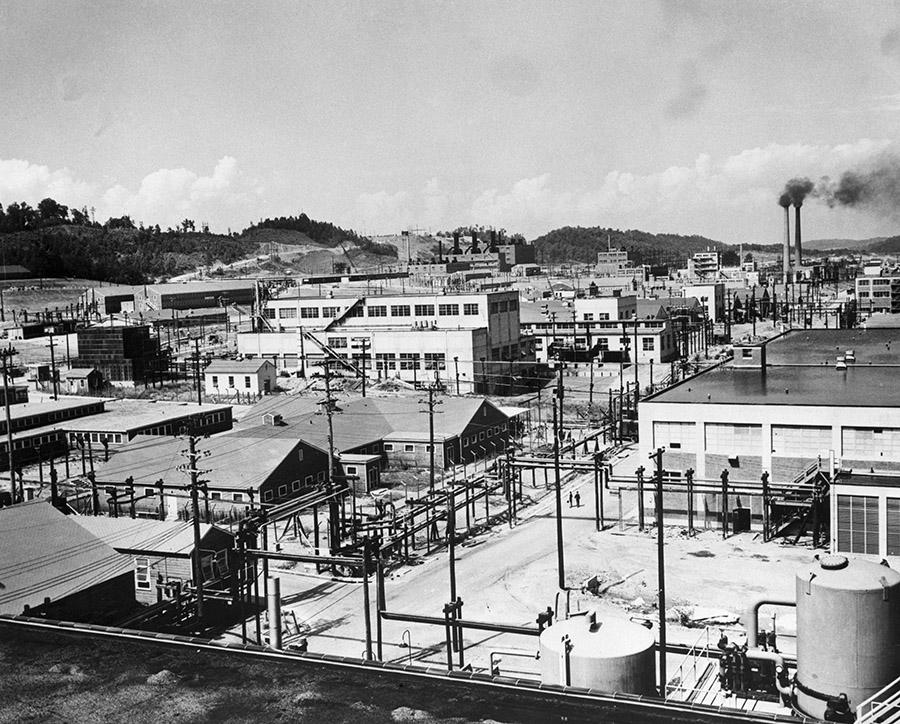 How did you come to understand the reasons for the Nazis’ failure to develop nuclear weapons, contrary to Allied fears? Was it by studying the behaviour of the German scientists who collaborated with the Nazis?
S.B.: So many scientists had been scared away that German science—which at that time was particularly successful, mostly in nuclear physics—was completely decimated. However, some scientists, such as the Nobel Prize winner Werner Heisenberg, did stay and collaborate with the Nazis. There was therefore a real risk. But the Germans were mistaken about the amount of uranium required to make a bomb.

They stepped up their research in a somewhat haphazard way, obtaining uranium ore, as well as heavy waterFermerUnlike ordinary water (H2O), molecules of heavy water (D2O) are made up of one oxygen atom and two deuterium atoms. Deuterium is an isotope of hydrogen: its nucleus contains the same number of protons as a hydrogen atom, but a different number of neutrons. Deuterium has one more neutron, which is why D2O is called heavy water. to study fission reactions. Heisenberg later claimed that he had knowingly concealed the possibility of building nuclear weapons from the Nazis, but I don’t believe that was true. Heisenberg and his colleagues were captured by the Allies and interned at Farm Hall, a manor house near Cambridge (UK), where microphones recorded their conversations during the bombing of Hiroshima and Nagasaki. It turns out that their main reaction was one of annoyance that they had failed where the Americans (including a large number of immigrant scientists of German origin) had succeeded.

Does your commitment today to help refugee scientists from other countries directly stem from your study of this chapter in the history of science?
S.B.: As I delved into the history of that period, I realised that the reception of immigrants in the years 1933-1945 was not dissimilar to today’s situation, with the issue of migratory flows, and the xenophobic attitude of certain nationalists contrasting with the courage of those who show that welcoming immigrants is beneficial for all.  When the Collège de France invited me to take the floor at its conference on ‘Migrations, refugees, exile’ in 2016, I learned that a National Programme for the Urgent Aid and Reception of Scientists in Exile (PAUSE) had recently been set up on the initiative of Alain Proschiantz and Edith Heard, both professors at the Collège de France. I immediately joined its sponsorship committee and contributed to evaluating numerous applications from Middle East war zones, Turkey, Venezuela, Pakistan, Afghanistan, etc. We received financial support from Pakistan and Afghanistan as well as from various sponsors, and we now even have backing from Europe. This enables us to assist around 120 refugee scientists each year, helping them to get their scientific work back on track within a year or two, and eventually find more stable employment. If the situation has improved in their country of origin, they can also choose to return to their homeland.

Article
Feminicide: naming the crime in order to fight it
history of science