In young children, the appearance of the first wordless pointing gestures can accurately predict when they will begin to speak.
C. Delahaye / Photononstop
Share
Share
What if the gestures we make when we speak do more than merely underline what we say? What if they also helped our oral expression? Convinced of the intimate connection between gestures and speech, two researchers launched a project to help people with Down syndrome express themselves more easily.

Just try it out—it works every time. Go into a bakery and when it’s your turn to order, point to a chosen treat behind the glass and say: “that’s the pastry I’d like.” You’ll notice that your finger will finish its course exactly when you pronounce the word “pastry.” And not just that: whatever language you use, be it English, French or Portuguese, the pointing gesture will finish up at the precise moment when you pronounce the stressed syllable in this word.

Or take another disconcerting example: the two jaw movements necessary for doubling the syllable “da” or “ma” in the words “dada” or “mama” correspond exactly to the time taken by an infant to perform the gesture of pointing to his or her parent. “These examples show that motor systems controlling speech on the one hand, and gestures on the other, are not independent, but strongly interconnected,” explains Amélie Rochet-Capellan, a motor-control specialist at the GIPSA-lab.1 When dealing with infants, the time at which the first wordless pointing gestures appear can help make precise predictions on when the child will begin to speak.

A frame for spoken language

“Gestures are not subsidiary to language. Nor are they an alternative communication system. They aid and frame spoken language,” specifies Marion Dohen, a specialist in multimodal communication from the same laboratory. The two scientists are sure of one thing: training and improving the motor control of someone’s arm can have visible positive effects on speech motor control. 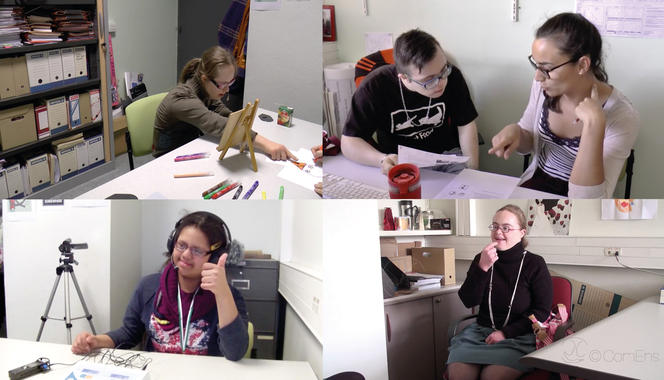 The ComEns project focuses on the link between gestures and words for people with Down syndrome. 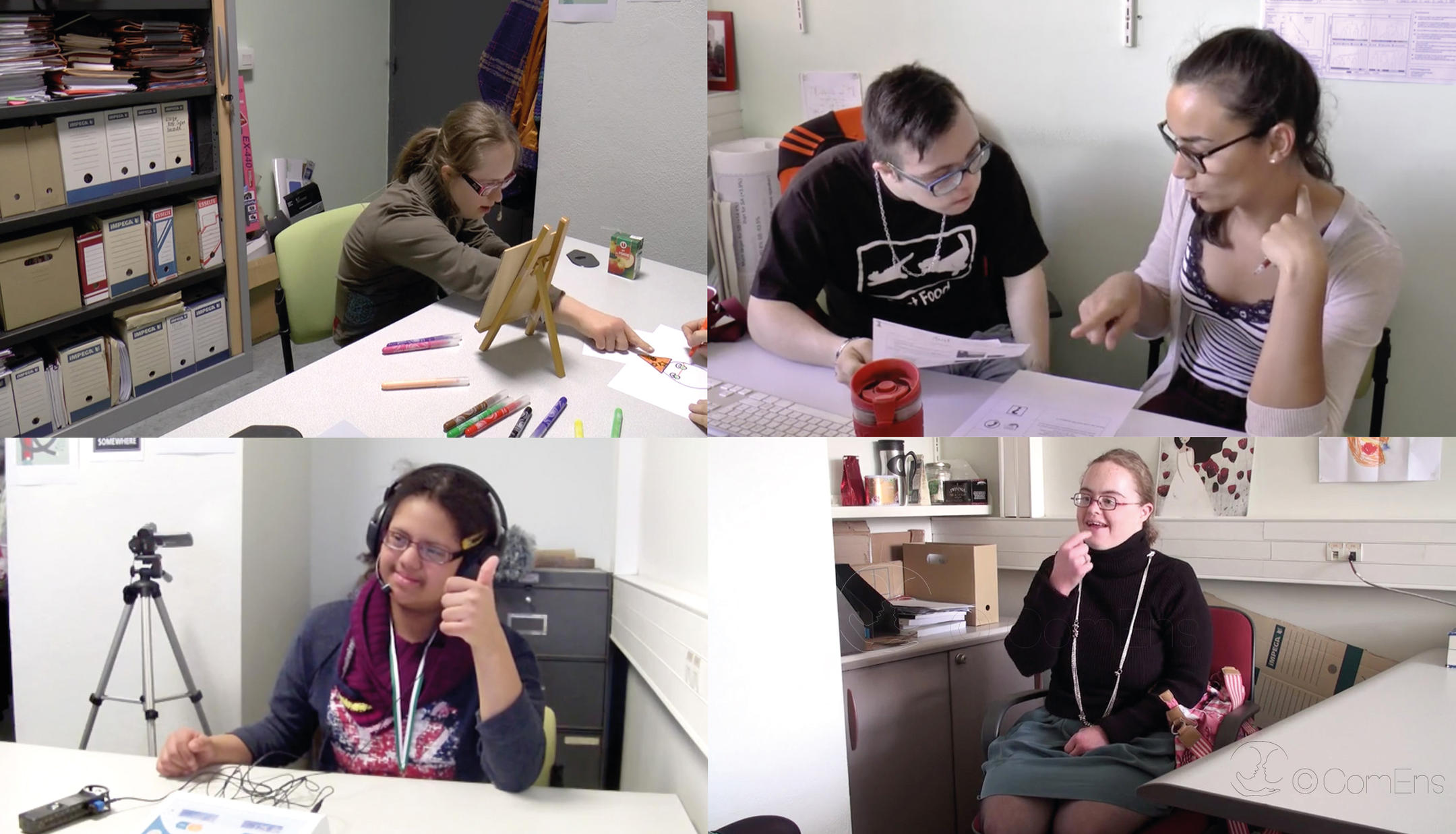 To check their theory, the pair set up a research project and worked with a population particularly prone to communication difficulties: people with Down syndrome. “Due to anatomical features which have nothing to do with intellectual deficiency, people with Down syndrome have more trouble with spoken language than ‘ordinary’ people,” comments Rochet-Capellan. “A larger tongue in relation to the vocal tract, a lack of mouth sensitivity, a deformed palate—all these elements, along with breathing problems, prevent them from forming syllables correctly and hinder verbal communication.”

Could hands therefore be used to improve speech? As far fetched as this may sound, the hypothesis is not new. In the US and Canada in particular, gesture systems like Makaton (a simplified version of sign language covering several hundreds of words from daily life) are already being successfully used to help people with Down syndrome (and others) better communicate. “But this development was purely empirical. There was no scientific corpus to demonstrate the validity of these practices,” points out Dohen. “In France, on top of crucial work on articulation, some speech therapists use gestures, for example Makaton, to enhance verbal communication. But they regularly come across opposition from parents who fear that gestures might replace words, and that their usage might further marginalize their child with Down syndrome,” adds the researcher.

Launched three years ago in the French city of Grenoble in partnership with a local association which promotes the integration of people with Down syndrome, the ComEns (Communiquons Ensemble or “Let’s Communicate Together”) project, supervised by the two researchers, is starting to bear fruit. A first component of the research consists in establishing a detailed diagnosis of the difficulties encountered by people with Down syndrome in terms of communication, but also in relation to their spontaneous use of gestures, by filming them in conversation with “ordinary” people with whom they have never previously interacted. “Beyond difficulties in articulation and speech structures which are specific to those with Down syndrome, we noticed that people addressing them tend to be very pushy and give them little opportunity to speak,” says Rochet-Capellan. “At the same time, people with Down syndrome produce few ‘backchannels’—in other words, reactions to what is said to them by nodding or uttering little words such as ‘hmmm,’ ‘ah,’ ‘OK’… This is an interesting area to work on as well as hand gestures.”

The ComEns project on the ground (film produced for the third “Disability, Research and Citizenship” Congress organized by FIRAH, the International Foundation of Applied Disability Research).

Gestures help us find our words, and also helps structure our speech.

Another component of the research—this time carried out with children—consists in matching gestures with little characters in different shapes and colors, designed by the researchers. “For each character, we invented a pseudo-word—a word that sounds ‘French’ but that doesn’t actually exist in order to avoid bias during the experiment,” explain the researchers. “During the exercise, we ask the child to pronounce the name of each character, either in association with a gesture, or without the help of his or her hands.” The first results are encouraging: matching words with gestures not only boosts the children’s memorization but also their articulation.

The researchers’ findings go even further. “When we train people to involve their bodies more when speaking, not only do gestures help them find their words, they also help them better structure their speech,” they reveal. These results are likely to stir the interest of other populations that have speech-related problems, such as children with language-related difficulties or Alzheimer’s patients.

Article
How Long Have we Been Talking?