Home / Articles / How Long Have we Been Talking?

How Long Have we Been Talking?

Home / Articles / How Long Have we Been Talking?

How Long Have we Been Talking?

BrAt82 /Stock.Adobe.com
Share
Share
Very popular for the past 50 years, the laryngeal descent theory (LDT), proposed to explain the human capacity for speech, has been challenged by a multidisciplinary team of researchers. Their conclusions push the possible emergence of speech back from 200,000 to more than 20 million years ago, according to a study recently published in Science Advances.

A fifty-year old theory seems to be on the way out. Proposed by the American cognitive scientist Philip Lieberman in 1969, and widely accepted and disseminated since then, the laryngeal descent theory (LDT) defined the one key condition for the emergence of speech in modern man, dated by Lieberman at around 200,000 years ago. The LDT posits that in order to have the capacity to articulate the vowel sounds “i” “a” and “u”, which are predominant in all of the world’s languages, one must have a descended larynxFermerThe part of the vocal tract that contains the vocal cords, at the back of the mouth cavity, under the pharynx., at the level of the fifth cervical vertebra, unlike our distant cousins the monkeys, whose larynx is located higher in the neck, at the third cervical vertebra. 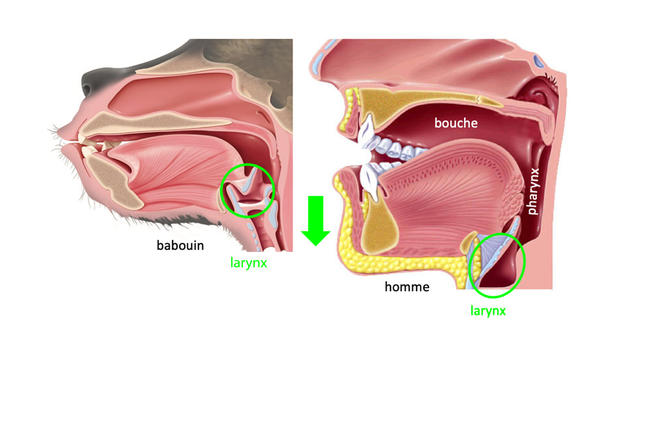 Vocal tract of the baboon and modern man. We find the same articulators - lips, tongue ... -, but in modern man, the larynx is positioned lower. 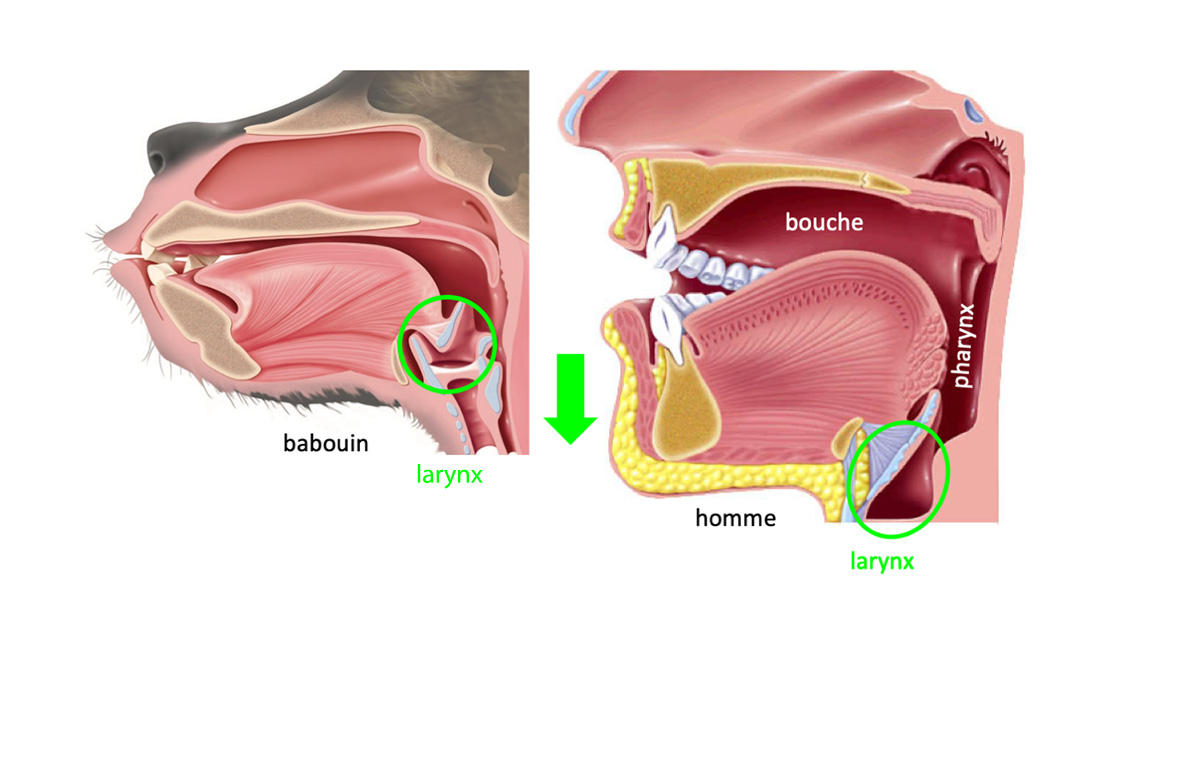 “The laryngeal descent theory is a very powerful concept that seeks to explain why humans can speak due to their evolution both as a species and as individuals,” notes Louis-Jean Boë, a speech specialist (now retired) at the Grenoble Images Speech Signal and Control laboratory (GIPSA-Lab)1 who directed and co-authored an extensive study recently published in Science Advances. In their first years of life, babies, like monkeys, indeed have a high larynx which then descends in the neck as the skull becomes longer. “The problem, as we have demonstrated after 20 years of multidisciplinary research, is that there is no valid foundation for this theory,” the scientist says.

According to the newly-published article, which correlates the work of some 20 researchers specialising in speech science, anatomy, primatology, infant cognition and human palaeontology, the position of the larynx has little influence on the ability to form vowels with enough differentiation to enable speech. “What is important is not so much the size of the vocal tract, the ‘pipe’ that rises from the vocal cords through the pharynx to the mouth,” Louis-Jean Boë explains, “but the way we control it through the movement of the lips, jaw and tongue.” The researcher goes further: not only is a low larynx not a prerequisite for speech, but monkeys and babies are in fact perfectly capable of emitting distinct vocal sounds.

In order to demonstrate this, the researchers in the project applied to babies and primates the same methodology used for studying human speech: the dynamic study of the varying shapes of the vocal tract during sound production, plus the detailed analysis of the resulting sounds using signal processing tools. Jean-Luc Schwartz, a specialist in speech mechanisms at the GIPSA-lab and co-author of the article published in Science Advances, reports, “we have shown that from a strictly anatomical point of view, babies are quite capable of producing the sounds ‘a’, ‘i’ and ‘u’, and actually do so very well from the age of nine months. If they do not articulate these sounds earlier, it is a matter of brain maturity rather than mechanical impossibility.”

“Regarding monkeys, we had the opportunity to work with Joël Fagot’s team at the Laboratory of Cognitive Psychology (LPC)2 in Marseille (southeastern France), who recorded a thousand vocal sounds made by semi-free-ranging baboons. With their help, we were able to observe that these primates produce up to six or seven differentiated sounds, a kind of proto-vowels, and that some of these are associated with clearly identified situations and behaviours,” Louis-Jean Boë adds. Acoustic studies conducted on macaques and baboons have also shown that the shape of their vocal tracts does not always stay the same — contrary to what Philip Lieberman suggested, and which he attributed to a high larynx — but can change extensively during the production of vocalisations. “It’s only fair to point out that Lieberman based his theory on the anatomical study of monkey corpses, which were obviously incapable of altering the shape of their vocal tracts.”

The Neanderthals could have conversed

Another aspect of the laryngeal descent theory that has been challenged by the group of researchers is the assertion that the Neanderthals, with their high larynx, were incapable of producing articulated speech. “The studies conducted on Neanderthal fossils by Jean-Louis Heim, our palaeontologist colleague from the Musée de l’Homme, cast doubt on this notion,” Louis-Jean Boë says. “If we look at the skull, cervical vertebrae and hyoid bone of a Neanderthal, it appears that they had the same head position as Homo sapiens and a larynx apparently located at the same level.” Anatomically speaking, the Neanderthals could therefore probably speak, although it is of course impossible to know whether they did or not.

According to the researchers, having solved the “LDT issue” opens a whole new field of investigation. “If we consider that monkeys are capable of articulating 0proto-vowels, and that their anatomy has evolved very little since separating from us 27 million years ago, this means that the earliest human species also had the capacity to produce differentiated sounds,” the researcher points out. “This pushes back the possible emergence of human articulated language by more than 20 million years. But we still don’t know what triggered this emergence — the anatomy, the brain, or genetics — nor when this event took place.” 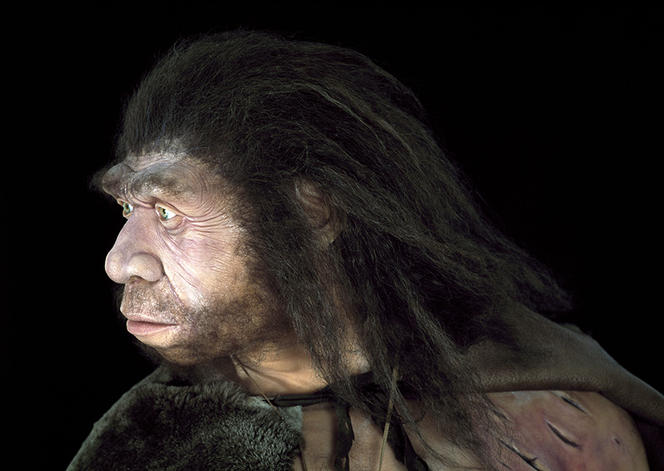 Neanderthals had the same head carriage as Homo Sapiens and a larynx probably positioned at the same height. 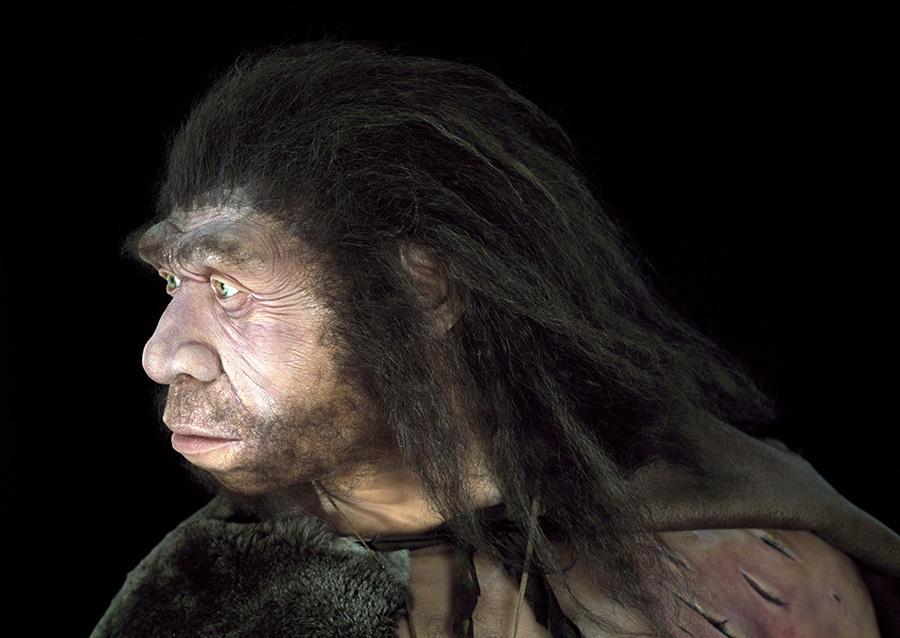 Neither is it known how a theory like LDT could have remained solidly in scientific favour for nearly 50 years without ever being challenged. “It’s an interesting case for the history and sociology of science,”  Louis-Jean Boë believes. “The explanation probably lies in the fact that it was easy to understand, both for scientists and the general public, and it covered a wide range of disciplines — primatology, palaeontology, infant studies, speech science — that are usually very compartmentalised.” A textbook case of the propagation of ideas.

See author's bio
Archaeologists Back in MesopotamiaPrevious
Seeing in the Dark?Next

Opinion
Has the current crisis changed our perception of science?