Home / Articles / The CNRS at 80: Emmanuel Macron pays tribute to “A model for freedom of research”

The CNRS at 80: Emmanuel Macron pays tribute to “A model for freedom of research”

Home / Articles / The CNRS at 80: Emmanuel Macron pays tribute to “A model for freedom of research”
0 comment
Society
Policy
-A +A
article

The CNRS at 80: Emmanuel Macron pays tribute to “A model for freedom of research”

Pascal VERSACI
Share
Share
The CNRS celebrated is 80th anniversary on 26 November in Paris, with an international symposium and an extraordinary ceremony for the 2019 Gold Medal—awarded to the physical chemist Thomas Ebbesen—in the presence of the French President, several ministers, as well as French and international research representatives.

The Elysée Palace is only a stone’s throw away from the Palais de la Découverte, so that French President Emmanuel Macron came on foot last Tuesday 26 November to the location chosen by the CNRS to celebrate its 80th anniversary in the presence of some 500 guests, many of whom had come from across the globe.

The Head of State opened the ceremony by saying that he was “very pleased to be among to celebrate this page in history. This 80th anniversary also bears witness to the international recognition that the CNRS has garnered over the last eight decades.” Europe’s first public research organisation did not want to celebrate this anniversary alone. Familiar faces from the world of higher education and research were joined by Vladislav Panchenko, Chairman of the Russian Foundation for Basic Research, Koji Saeki, Senior Vice-President of the Japan Science and Technology Agency, and Yaping Zhang, Vice-President of the Chinese Academy of Sciences. Also present were members of the French government, including the Minister for Solidarity and Health Agnès Buzyn and Minister of Higher Education, Research and Innovation Frédérique Vidal, as well as leading European figures such as Jean-Eric Paquet, European Commission Director-General for Research and Innovation, Jean-Pierre Bourguignon, President of the European Research Council, and Laurent Fabius, President of the French Constitutional Council. Guests also included prominent figures from the world of science and industry, and an audience of French MPs. 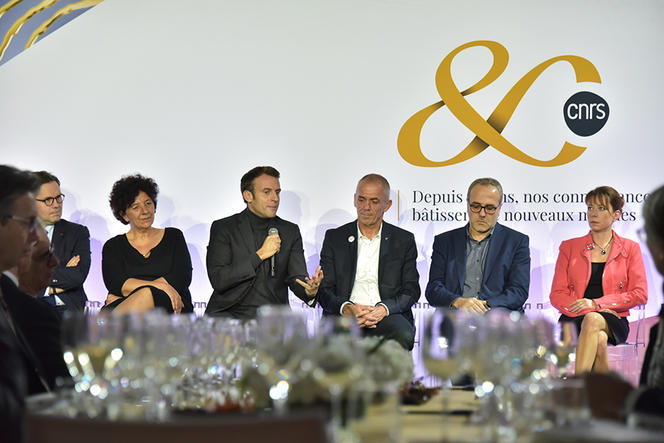 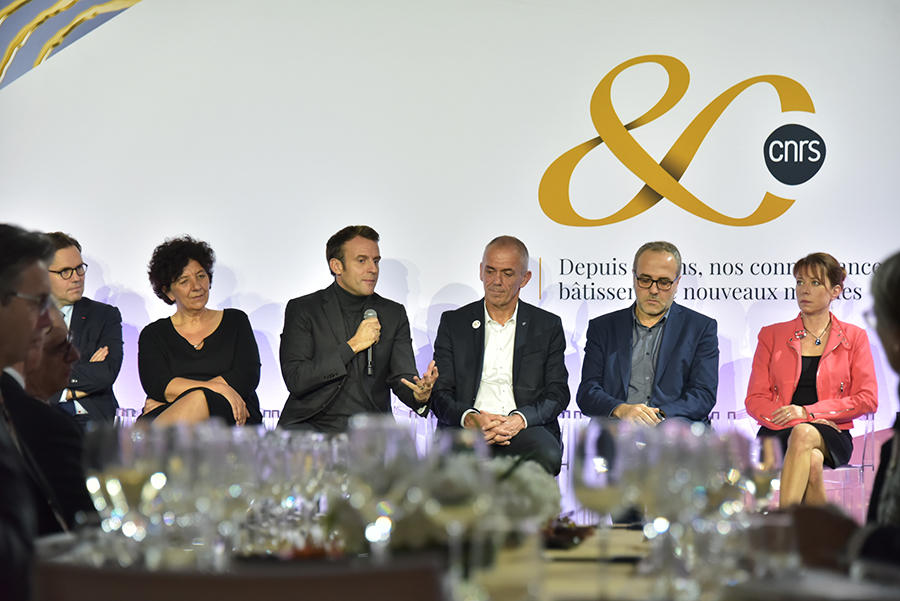 As the long-term programming law for research is under preparation for presentation to the council of ministers in late February, the French President took this opportunity to engage in a dialogue with scientists from different backgrounds.

Raphaël Rodriguez opened the sequence with a frank and direct account: “I work 80 hours a week and earn 3,400 euros a month, which averages out to a salary of 10 to 11 euros per hour,” observed the chemist, who leads the Chemical Biology of Cancer team at the Institut Curie. For him such low salaries are indicative of a lack of recognition and attractiveness on the part of French laboratories.
For the researcher Ika Paul-Pont, the problem is to retain staff “that is well-trained, competent, and qualified over the long term,” as the Sauvadet law prevents hiring employees on temporary contracts for more than 6 years, in a context where laboratory recruitment on the basis of a competitive entrance examination has become “highly challenging.” She emphasised that this situation is all the more regrettable considering that these projects are “well financed” due to their focus on plastic pollution in the oceans, a subject that generates strong consensus. Coralie Chevallier, a researcher in cognitive science, questioned the administrative hurdles: “Eliminating a form generates positive externalities.” “All right, we’ll do it then!” responded Emmanuel Macron, who reiterated his confidence in French research, and used the example of the CNRS to praise “a model for freedom (…) that has helped the country in many conquests”. “What this model provides for the French system is invaluable... we need fundamental research, we need science and technology to meet all of our challenges,” he said.

The challenges of international research

This festive evening followed a day of exchange at the Institut de France, which had become a hotspot for global research. More than 350 university chancellors and vice-chancellors, financing agencies, and other organisations met for an international symposium where round-table discussions were held on hot global science topics, including the dynamics of Open Science, the influence of scientists on international policy-making, which varies depending on the subject (climate, biodiversity, migration, artificial intelligence, etc.), as well as international collaboration and competition—the famous “coopetition” concept that is part of everyday life in laboratories. As partners, Europe, China, Russia, India, and Japan had all answered the CNRS’s call.

“Our objective is that 100% of our publications are in Open Access by late 2020. We also aim to promote data storage as well as boost text and data mining, and encourage an evaluation based on qualitative criteria,” announced Sylvie Rousset, Director of the CNRS Scientific and Technical Information Department, who also reiterated the various priorities of the CNRS roadmap for Open Science. Countries are converging around this objective, but the avenues for achieving it diverge: “It is very difficult to control the quality of a researcher’s work without publishers,” observed Horst Hippler, former President of the German Rectors’ Conference, with Germany appearing to favour negotiation with publishers.

In short, freeing science to create even more progress seemed essential. “We are at the dawn of a massive extinction of species and a major crisis caused by climate change,” warned Thomas Arnold, Advisor for Sustainable Development Goals at the European Commission. On stage were international panels of experts investigating how to translate research results into public policy. When it does exist, international research cooperation is capable of a great deal. Lamine Gueye, Director of the Environment, Health and Societies International Research Laboratory,  drew attention to the Great Green Wall initiative in Sub-Saharan Africa, which involved 14 African governments and became a “site of intense research activity.”

With “coopetition”, feelings are running high about the brain drain, university rankings, and investment in large-scale instruments. The United Kingdom, which is under the growing shadow of Brexit, has made the firm choice of cooperation. “The last three years have been difficult,” explained Julie Maxton, Executive Director of the UK Royal Society. “But we hope for the closest possible connection with the Horizon Europe programme, and for science to remain an international effort!” Thanks to the CNRS, France has positioned itself as a key player within this global cooperation. “France is a major scientific country,” emphasised CNRS's CEO Antoine Petit, “and the CNRS has a lot to do with that. It is important to bear in mind that the chief strength of the CNRS is without a doubt the quality of its staff”.

See author's bio
Thomas Ebbesen: "I Feel like an Explorer"Previous
How to Reconstruct the Sound of Notre-Dame?Next

Article
Where the CNRS Was Born

Opinion
Scientists for the French Republic

Article
Alain Fuchs: “Our most potent weapons: intelligence and...