Left: image containing a hidden message (the insertion of the message is invisible to the eye). Right: difference amplified between the original image and that containing concealed information: this method modifies the image in the least detectable pixels.
Perrine Vantalon
Share
Share
Less known than cryptography, steganography is another means of secretly sending a message by hiding it within other content. CNRS News investigates.

Everyone knows that writing a message with lemon juice makes it invisible, until the paper is brought near a heat source and reveals its contents. This method, which conceals the data in a “covering” medium, is known as steganography, from the Greek word steganos, meaning “watertight” or “sealed”. It was long based on ingenious but elementary methods, which were succeeded by digital techniques that made a number of steganographic tools available to the public (PixelKnot, Steghide, Invisible Secret 4, etc.). Digitisation now makes it possible to hide any message within other audio, written, or visual content. While cryptography leaves the message visible and makes it illegible to those who do not have the decryption key, steganography renders it practically invisible to the eye. Cryptography is sufficient for exchanging the information that simply needs to be kept confidential, such as banking data; steganography is needed for those who must not be suspected of hiding anything, such as dissidents living under totalitarian regimes, or spies and criminals.

Hiding a needle in a stack of pixels

“The use of steganography expanded considerably after the September 11 attacks. Al-Qaeda agents were suspected of using steganographic methods to convey messages,” notes Patrick Bas, a research professor at the Research Centre in Computer Science, Signal, and Automatic Control of Lille (CRIStAL).1 “In reaction, and especially as part of subsequent investigations into paedophile networks, security agencies developed new detection techniques.” This is known as steganalysis. 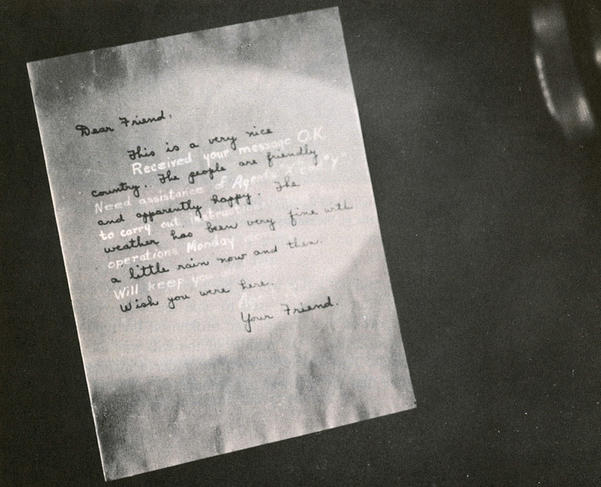 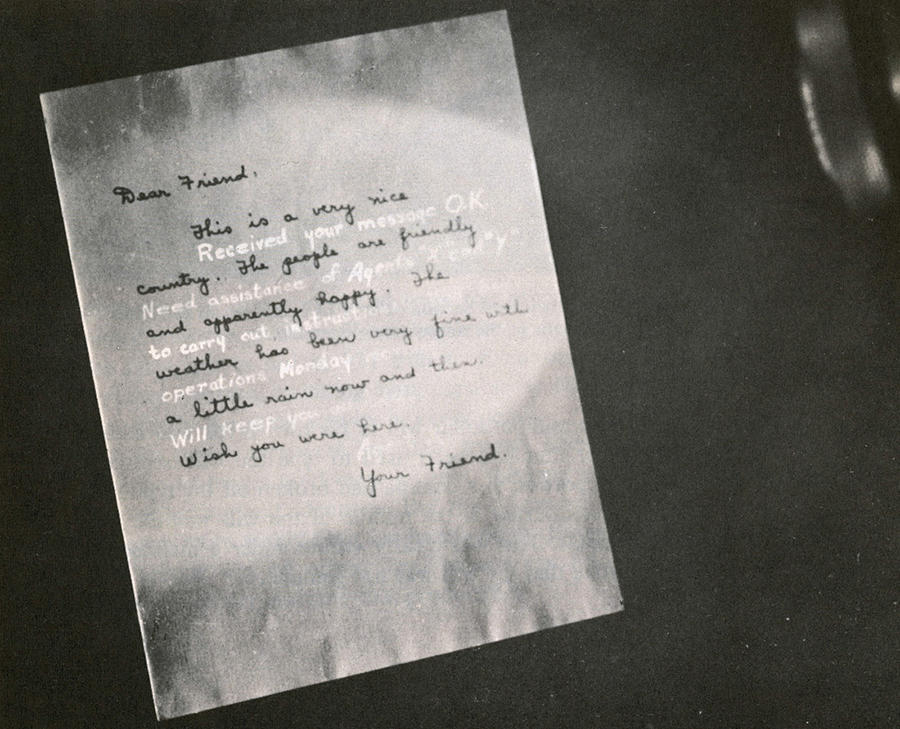 While there are multiple types of digital concealment – in sounds, videos, and even other texts – the most widespread steganographic method today is based on images. This is referred to as spatial insertion, with the steganographic tool selecting the “ least visible” pixels in order to hide a message there. “For instance, in a portrait the pixels that form a person's hair represent the most complex part of the image, offering better hiding spots than a homogenous area such a portion of wall in the background, where the least modification can quickly be spotted.” The goal is to identify the areas with the graphic content that is the most difficult to analyse.

A standard-sized digital image consists of a million pixels each with a colour value coded over a number of bits, leaving multiple millions of bits in which to hide a secret message. Steganographic methods modify some of these bits, coding for information that is hardly visible to the naked eye (such as level of saturation). They are known as “least significant bits”. All of these modifications will later be located using an encrypted key.

Steganalysis or the AI version of Sherlock Holmes

Researchers have of course developed techniques for detecting and decrypting hidden messages. This is how steganography gave rise to steganalysis. These methods are firstly based on deep learning software that checks thousands of items of content, in order to identify the similarities and differences between images that contain messages and those that do not. 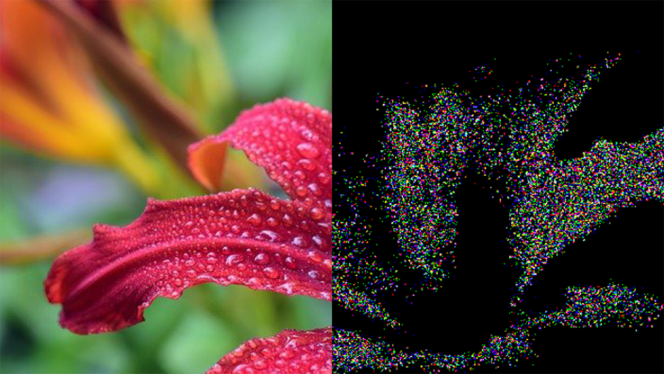 Left: image containing a hidden message (the insertion of the message is invisible to the eye). Right: difference amplified between the original image and that containing concealed information: this method modifies the image in the least detectable pixels. 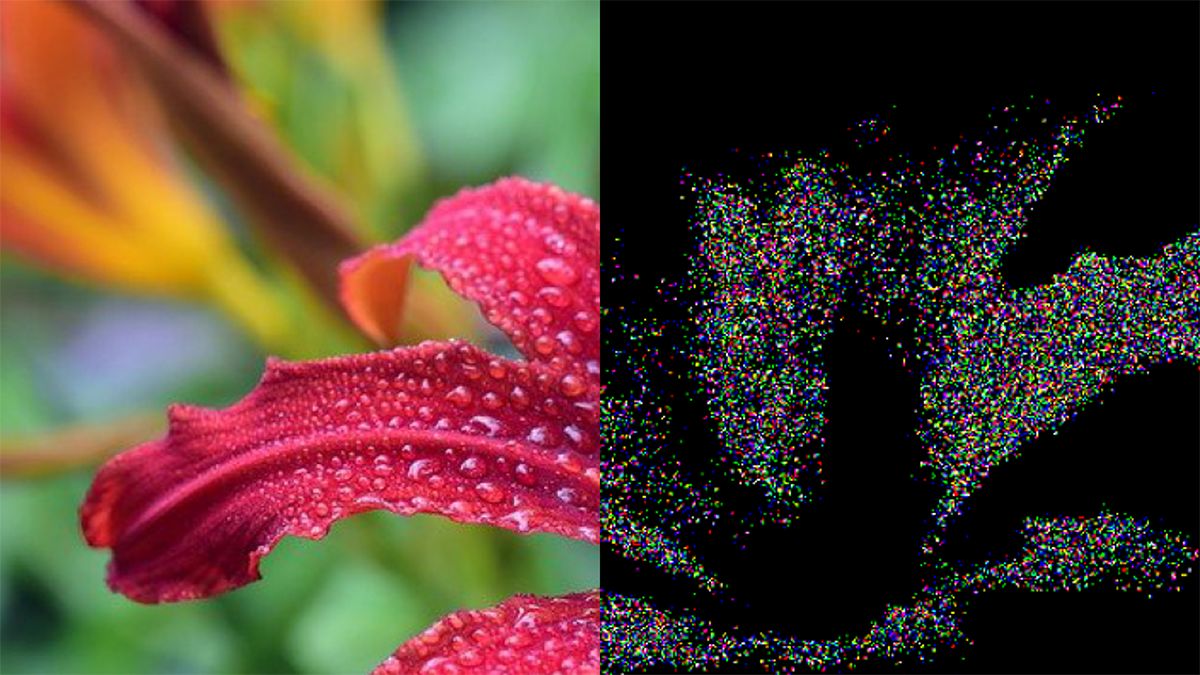 Left: image containing a hidden message (the insertion of the message is invisible to the eye). Right: difference amplified between the original image and that containing concealed information: this method modifies the image in the least detectable pixels.
Perrine Vantalon
Perrine Vantalon
Share
Share

Steganalysis also involves detecting the presence of anomalies or irregularities known as noise. To this “natural” phenomenon, found in all of our photographs, the steganographic tool adds “artificial” noise. A picture taken in broad daylight will be much sharper and more faithful to the photographed object than an image taken at night, when there are few photons in the light captured, and these are engulfed by the “noise” from the darker and coarser pixels that interfere with the image. It is by analysing this photon noise – counting the number of photons – that steganalysts try to detect anomalies and extract the steganographic message.

“This is why hair, a dense and complex area where there are numerous fluctuations, is favourable to hiding messages. Given that there is already a great deal of interference and photon noise, modifications will have a better chance of going undetected!”

Kyrill Nikitine is a freelance writer and journalist. He writes for Télérama, Science & Vie, La Revue des Deux Mondes, We Demain, and Le Débat Gallimard.
He is the author of the story Le Chant du derviche tourneur (2012).