Stratigraphic analysis of an XVIIth century oil painting, the Madonna in Preghiera. Left to right: visible, UV Fluroescence, IR Reflectography.
Georgia tech-CNRS
Share
Share
An international research team has upgraded an imaging method able to unveil, in high-resolution 3D, the structure of layers below the surface of paintings and other objects, opening up new prospects for art-history investigations—and much more.

Hands raised, palms together, and eyes lowered, she is the very picture of communion with invisible divine realms. What secrets does this prayerful Mary guard, gracing an oil-on-canvas that emerged from the workshop of 17th-century painter Giovanni Battista Salvi da Sassoferrato? But even if the lips of the Madonna in Preghiera remain sealed, engineering scientists based in France, Italy and the US have now seen what lies behind her ethereal aura—materially speaking at least.

By coupling a highly-sensitive electromagnetic imaging scanner with an advanced data-processing technique, the research team has peeled away centuries of history and yielded a 3D map, in unprecedented high resolution, of the different preparatory layers under the painting’s surface.1 Not only does their innovative strategy promise to resolve long-standing uncertainties surrounding ancient artworks, it also raises exciting possibilities for a range of other areas.

It wasn’t beauty alone that drew the engineering scientists to Madonna in Preghiera. “We wanted to study a work with thin paint and preparatory layers,” says Alexandre Locquet of the Phototonics and Terahertz Group at Georgia Tech-CNRS UMI2 in Metz, France, and the Italian painting conserved at the Musée de La Cour d’Or in Metz Métropole fit the bill. 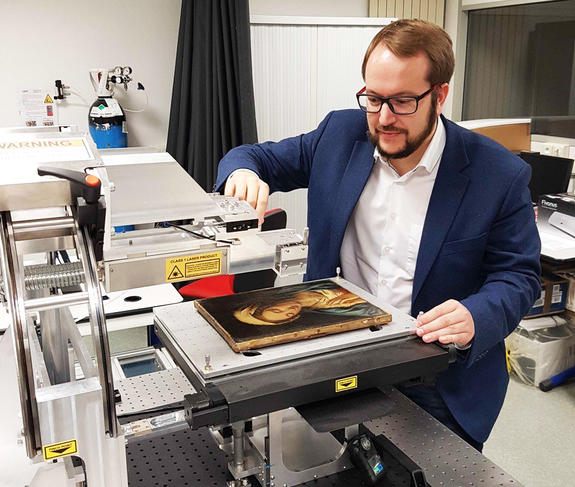 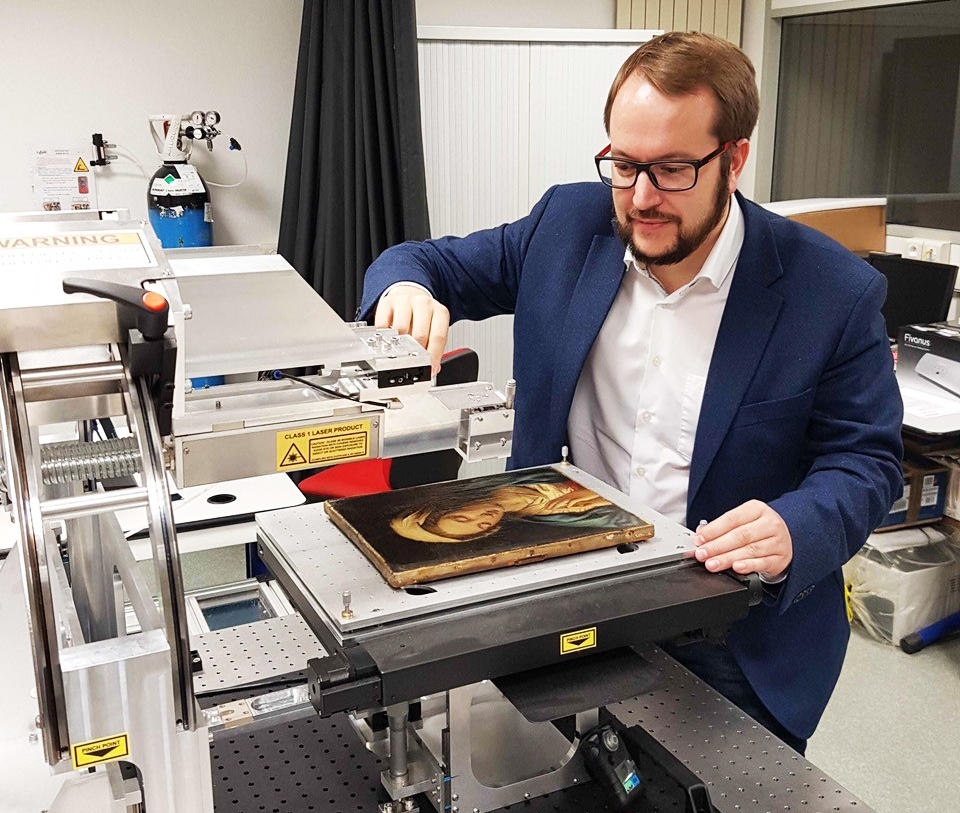 To understand the artistic technique of this Baroque gem, we need to delve below its visible surface, into its underlying strata. Until now, researchers established the hidden layers of artworks by examining cross-sections of micro-samples removed from the piece. But how can we map out the structure of these layers without tampering with the work at all?

A faster and portable method

While a few nondestructive strategies have emerged in recent years, these often come with their own setbacks: for example, X-ray-based imaging techniques present health hazards for operators and risk affecting pigments, whereas particle-accelerator devices are “bulky, expensive and cannot be applied in situ,” points out Locquet. The need for a relatively “cheap, compact and mobile” solution urged the scientific team to refine an imaging technique based on terahertz radiation, pulsing out nonhazardous electromagnetic waves at terahertzFermerA unit measuring electromagnetic-wave frequency equal to 1 trillion hertz. frequencies.

“What’s handy about our method is that the painting doesn’t need to be prepared in any way,” Locquet explains. “We simply place it face down on a gantry for it to be scanned.” In this way, the Madonna in Preghiera was “raster”-scanned—line by line across its entire surface area—with a commercial terahertz scanner that bombarded the painting with tiny electromagnetic waves ranging from just 0.1 to 1 mm in wavelength. In response, the painting’s different unseen layers reflected the terahertz pulses, thus producing masses of signals measurable by a detector. Significantly, the signals’ intensity and reception time offered clues on the number of layers below the surface, as well as their thickness. While terahertz radiation has previously been used to image the hidden layers of paintings, the research team has significantly boosted the technique via their savvy new strategy for processing the intricate electromagnetic signals beamed back by the underlayers. 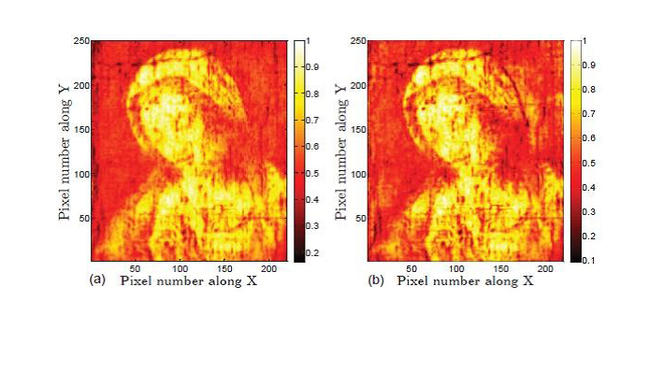 Terahertz images of the Virgin at Prayer based on (a) the amplitude of the reflected signal and (b) the spectrum of this signal between 0.5 and 1 THz. 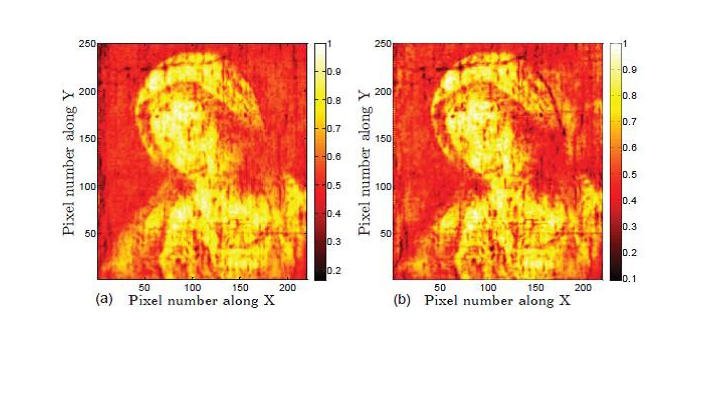 As Locquet comments, “the signal-processing techniques used until now can reveal thicker layers such as the canvas and varnish, but not the thinner preparatory and pictorial layers which, in easel paintings from the 17th and 18th centuries, measure just tens of micronsFermerA unit measuring electromagnetic-wave frequency equal to 1 trillion hertz.. ” More precisely, these extremely thin layers have so far eluded detection because “their different echoes overlap and merge into a single combined echo from which information has to be extracted.” However, by adapting, as suggested by doctoral student Junliang Dong, a mathematical approach termed “sparsity-based time-domain deconvolution”—“a technique more commonly used in other fields such as ultrasonics, and employed for the first time in the terahertz field here”—the team developed algorithms that could yield a fine-tuned reading of the signals, including those emitted by the painting’s thinnest layers. Then, by feeding this data into computer models, they came up with 3D maps showing the painting’s underlayers with a groundbreaking degree of detail.

Using terahertz waves, researchers came up with 3D maps showing the painting’s underlayers with a groundbreaking degree of detail.

Through their study of the Madonna in Preghiera, the team detected the sequence and thickness of its five layers: the ground layer directly covering the canvas, topped by the imprimatura (a preliminary stain of color), followed by the underpainting used as a base, then the pictorial layer, and lastly, a coating of varnish. “Not only can this type of analysis shed light on the artist’s technique,” notes Locquet, “it can also help authenticate paintings when doubt surrounds the creator’s identity.” Moreover, the team’s strategy can help support conservation and restoration decisions. As the researcher points out, “our method can also visualize defects such as cracks, whose presence might not be gauged by surface analysis.” Going even further back in time, the scientific team is now turning its attention to a lead funerary cross believed to date from the 15th century. “Oxidization of the lead has made inscriptions on the cross illegible. Our goal is to decipher the inscriptions before the piece is restored.”

But art isn’t the only discipline that stands to gain from the team’s approach to terahertz radiation. As the Georgia Tech-CNRS scientist explains, “Terahertz waves penetrate most non-metallic materials, so our imaging approach can benefit very broad fields.” He mentions “promising applications in characterizing damage such as delamination or fiber breakage in composites or coatings” for sundry objects ranging from wind-turbine components to car parts. “There are also biomedical applications, especially for detecting skin cancer or tooth decay, or else for the endoscopic examination of esophagus disorders.” In addition, “applications can potentially be developed for security inspection and anti-counterfeiting technology,” the researcher concludes.

Article
Forthcoming revolution will unveil the secrets of matter
Engineering

Article
Harvesting Energy for the Internet of Things
Imaging

Article
The memory of 13 November gradually comes to light