Pyrène is the result of a partnership between automation scientists from France’s LAAS in Toulouse and Spain’s PAL Robotics manufacturing company in Barcelona, hence its name, a reference to the mountain range between the two countries.
Olivier STASSE/LAAS/CNRS
Share
Share
Stronger, smarter, more agile, and taller than its predecessor, a new humanoid robot called Pyrène will soon take center stage as France’s main platform for advanced robotics research.

Moving with an uncanny human gait, Pyrène takes challenges, such as climbing stairs, negotiating bumpy ground, and lifting heavy objects, all in its stride. The 1.75 m-tall robot owes its agility to a complex mechanical structure offering thirty-two degrees of freedom, in other words, independent ways in which the system can move. Adjusting its steps to the terrain and conditions, its impressive steadiness is due to an inertial measurement unit that does for humanoid stability what the inner ear does for human balance. If there are obstacles in its path, it ‘sights’ them with a stereo depth-sensing camera before neatly stepping around them. If anything needs picking up, its gripper-hands can do the job, with no fear of it ‘manhandling’ the object. Force sensors in its wrists and ankles let it detect external forces and hence interact with its surroundings more appropriately. Meanwhile, torque sensors in its remaining joints allow it to generate movement while taking into account whole-body dynamics.

With improved reactivity to the environment and boosted capacities, Pyrène, which was unveiled this February, marks a significant break from past models of biped robot and is an impressive example of what can be achieved when fundamental science and industry join forces. It is the result of a partnership between automation scientists from France’s LAAS1 laboratory in Toulouse and Spain’s PAL Robotics2 manufacturing company in Barcelona, hence its name, a reference to the mountain range between the two countries.

But  what exactly will Pyrène’s humanlike gestures be used for? For Gepetto, the LAAS robotics team that formulated the requirements for Pyrène’s design, a couple of motivations come into play—not least, the advancement of research. Since its creation in 2006, the Gepetto team has focused its research on the principles underlying human motion, and uses humanoids as vital research platforms. Findings made using these platforms can then potentially be harnessed for practical applications by specialists in a range of fields, like machine design biomechanics or prosthetics.

Since its launch, the team’s humanoid R&D platform was a Japanese-built HRP-2, delivered to the LAAS in the context of the Joint Robotics Laboratory set up between the CNRS and Japan's AIST.3 Gepetto’s leader Philippe Souères reminds us that HRP-2 already allowed the team “to successfully demonstrate its capacity to develop algorithms to make the robot move and coordinate movements.”  Yet given the surge of technological developments in the past decade, it was time for Gepetto “to transfer its accumulated experience to a new-generation platform”—now offered by Pyrène.

Beyond research, these increasingly agile humanoid robots are also becoming useful objects in their own right, as seen by their emergence in disaster response, service robotics and medical assistance, or the factory of the future.

They will help people in environments that are adapted for people.

Humanoid ‘manpower’ is all the more appreciable when the tasks assigned to them are dangerous or strenuous for humans, and this type of hands-on functionality is clearly part of Gepetto’s vision. Ongoing collaborations between the LAAS and aircraft manufacturer Airbus prompted the team to develop an industrial robot suited to “heavy-duty tasks that may cause musculoskeletal troubles in humans,” specifies Olivier Stasse, Gepetto senior researcher in charge of the Pyrène project.

And as humanoids are not intended to fully ‘replace’ human workers, but work alongside them—“to navigate and help people in environments that are adapted for people,” as Stasse puts it—Gepetto also sought a model that would offer safe human interaction. This twin requirement for a robot—great strength and surrounding-awareness—led the team to define a number of technical specifications that comprise “boosted power for the robot’s actuatorsFermerDevices converting energy into physical motion, stronger perception capacities and faster information-processing capacities,” explains Souerès.

With its technical wish list in hand, Gepetto launched a call for tenders to find a manufacturing partner who could fine-tune the design and produce it. This partner, located on the other side of the French-Spanish border, was PAL Robotics. “We were already very impressed with PAL Robotics’ two previous generations of humanoids,” Stasse points out. “They confirmed this competence throughout the collaboration by the exceptional quality of our technical exchanges.” Pyrène is the inaugural model of PAL Robotics’ third-generation humanoids, the first in its new series that the company is now commercializing under the name “Talos.” 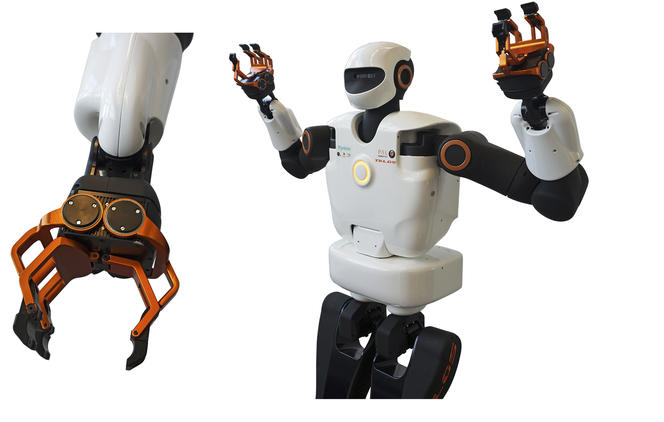 With agile gripper-hands that can grab objects with the required amount of force, Pyrène can also carry up to 6 kg on each arm. 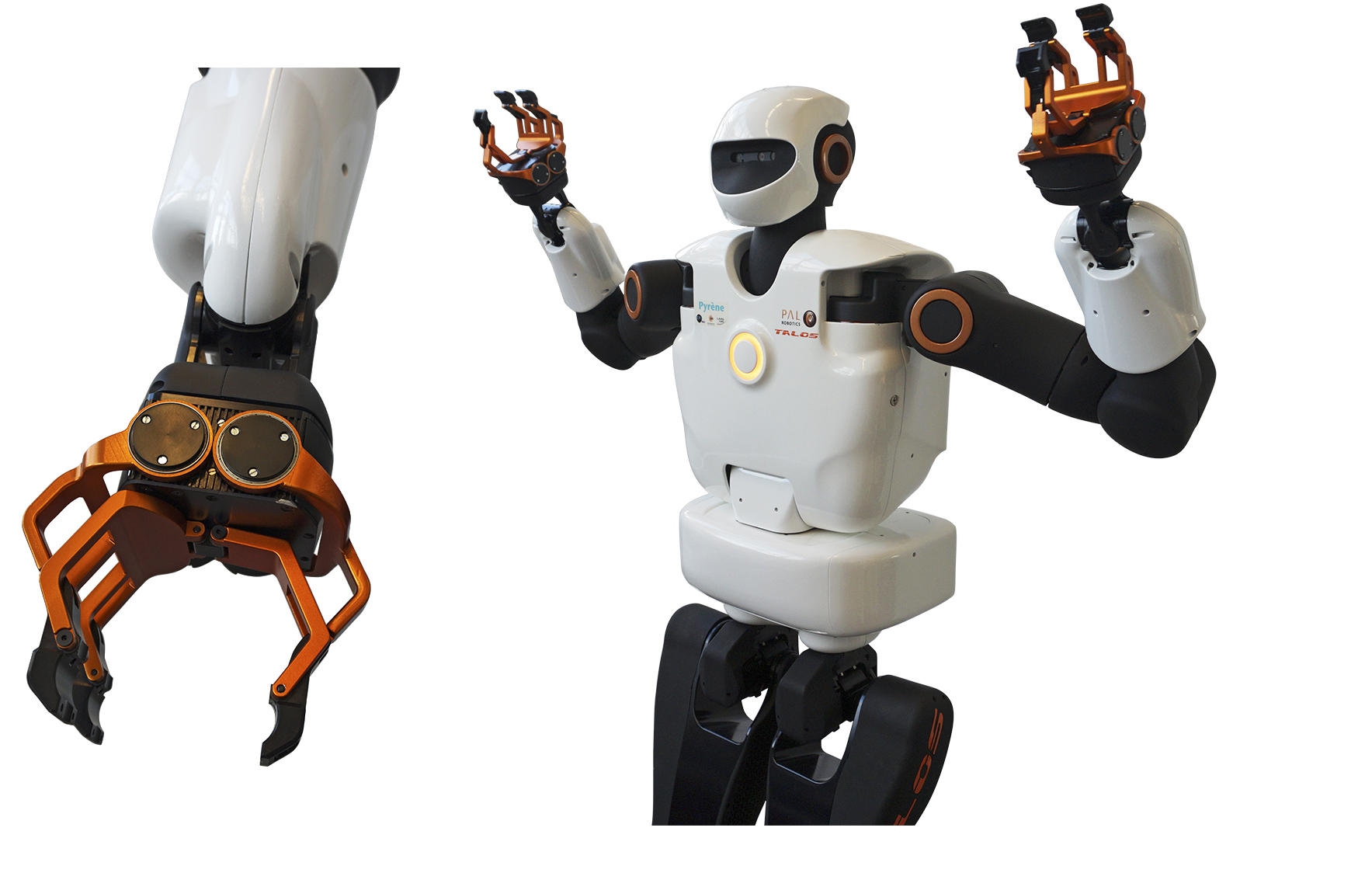 One of the many physical improvements over its predecessors involves climbing.  “The leg dimensions of earlier humanoids were problematic for standard-sized stairs,” says Stasse, explaining why Pyrène’s legs were lengthened.

Pyrène can manipulate tools and perform actions like screwing and drilling.

Another innovation, achieved by overhauling the layout of engines inside all of Pyrène’s joints, is that the humanoid can now “manipulate tools and perform actions like screwing and drilling.” Actions that already have been achieved by robotic devices, but not previously by biped humanoids. And Pyrène can also put some ‘muscle’ into it, as it can carry an unprecedented 6 kg at the end of each arm.

To lift such heavy loads and for high-energy tasks such as walking on uneven ground, Stasse notes that the robot is equipped with “higher-powered engines for faster, more dynamic action, and fully supplied by electric power,” notes Stasse. This choice of electric power is incidentally strategic. For even if hydraulic power, used in humanoids like Boston Dynamics’ mighty Atlas,4 is undeniably vigorous, “it remains difficult to channel into secure, controlled applications destined for human environments, which is really our aim,” he adds.

As for the humanoid’s computational improvements, Pyrène boasts heightened powers of perception and calculation—prerequisites to react quickly in any situation. The faster a robot picks up and processes data on its surroundings, the better it can plan and control a response. “When it meets an obstacle, it needs to regain its balance very quickly—or it falls down,” says Stasse. To achieve this crucial speed, Pyrène’s hi-tech sensor components are enhanced by last-generation processors whereas busesthe systems that transfer data between a computer’s components—are reorganized into innovative compositions that accelerate information transfers, thus boosting data-crunching capacities.

Needless to say,  Pyrène promises to lead scientists and industrial users into uncharted territory. The humanoid’s construction was supported by CNRS funding attributed by the INS2I5 while also largely being financed by the European Research Council Grant awarded to Actanthrope (2014-2018), “a LAAS project run by Gepetto founder Jean-Paul Laumond, on computational models for anthropomorphic action, which budgeted the purchase of a humanoid robot,” adds Souerès Souères. LAAS researchers can now expect Pyrène to feed back into their future findings by offering a “cutting-edge platform that opens up a new era for research into humanoid capacity,” enthuses Gepetto’s leader. On the industrial front, he notes that in the context of the LAAS’ collaborations with Airbus, “very early-stage demonstrations on how Pyrène can move, wield tools and execute tasks in the factory of the future are planned for the coming year.”