Thermokarst ponds (here seen covered in snow), caused by thawing permafrost. The Arctic is believed to contain several million of them.
L. CAILLOCE/CNRS PHOTOTHEQUE
Share
Share
Frozen for thousands of years, the Arctic's permafrost soil is gradually thawing due to climate change—and releasing potent greenhouse gases into the atmosphere. As Paris prepares to host the next UN Climate Change Conference (COP 21), CNRS International Magazine traveled to Kuujjuarapik in the Canadian Subarctic to investigate this phenomenon, which is vastly underestimated or neglected in climate models.

Traveling in the Far North requires a great deal of patience, as the Inuit, who are used to long delays in the region's airports, know only too well. On this December morning, we can experience it first hand. The Air Inuit flight we caught in Montreal is forced to land when we're 150 kilometers from Kuujjuarapik, our final destination. In this Inuit village on the southern shores of Hudson Bay, at the mouth of the Great Whale River, a blizzard is raging, preventing all air traffic. These are unusual weather conditions for this time of year. "Because of climate change, the sea ice takes longer to form on the bay, creating highly unstable air masses," we're told.

This is only one of the many consequences of climate change in Nunavik, an Arctic region of Quebec where 90% of the population is Inuit. Here, not only is the sea ice shrinking every year, but the permafrost, soil that is permanently frozen and typical of the Arctic, is also thawing. And this is a serious issue not only for the infrastructure of the region's fourteen municipalities—riddled with potholes and cracks on roads or airport runways, not to mention the ground gradually settling under house foundations—but also for the future of the planet's climate. To find out more about this unsettling phenomenon, we decided to take a trip with Florent Dominé. This researcher at the Franco-Canadian Takuvik joint laboratory has launched an ambitious research project on permafrost called APT (Acceleration of Permafrost Thaw by Snow-Vegetation Interactions), which brings together no fewer than eight French and Canadian laboratories.1 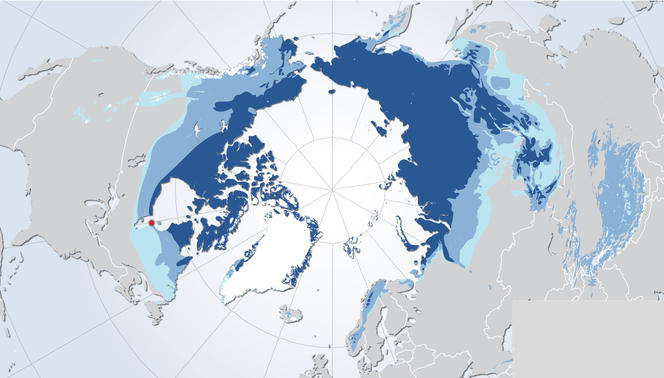 Permafrost in the Northern Hemisphere: ranging from dark to light blue, areas of continuous (90% of the surface) to sporadic (less than 10%) permafrost. In red: Kuujjuarapik. 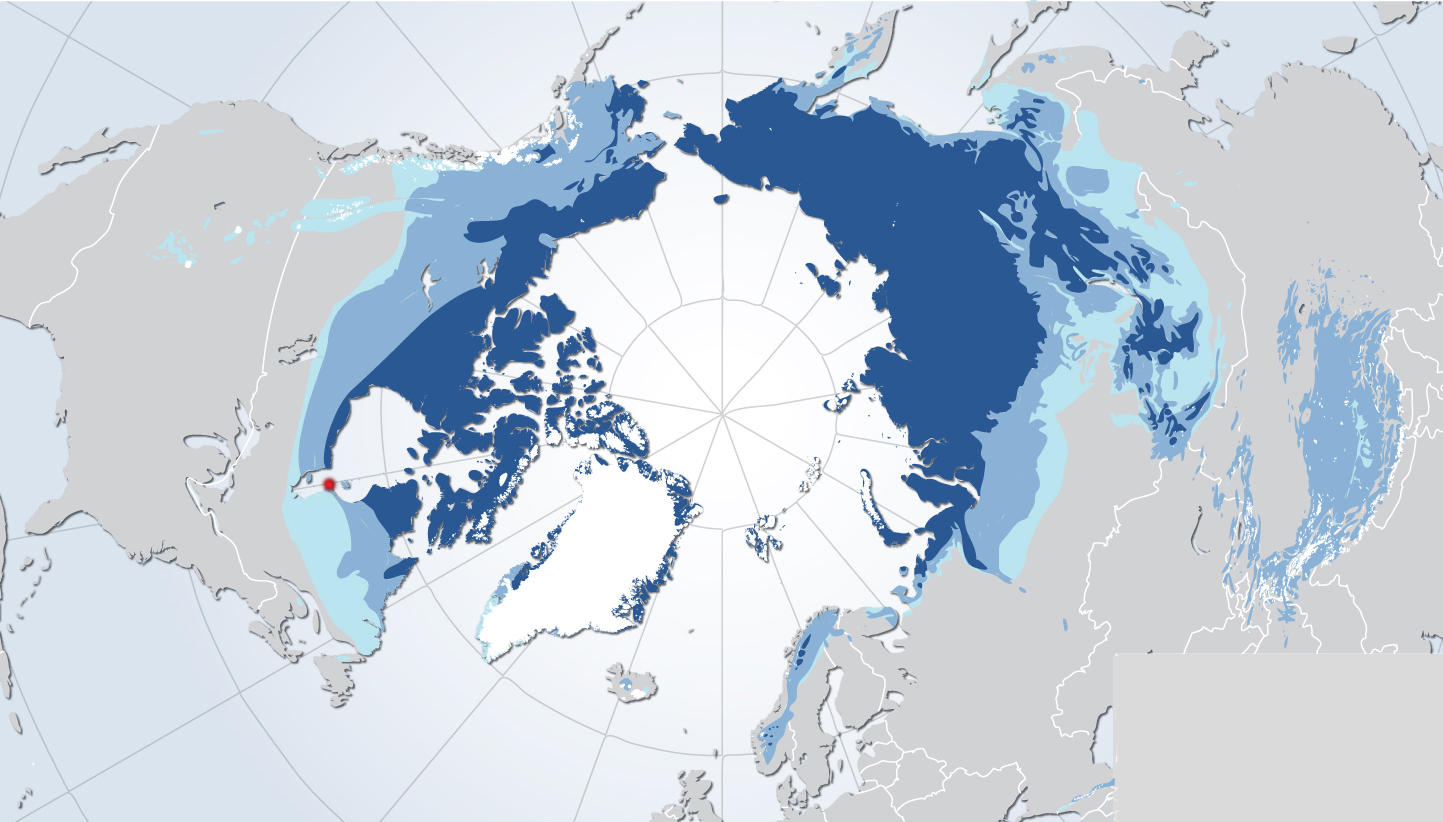 Permafrost in the Northern Hemisphere: ranging from dark to light blue, areas of continuous (90% of the surface) to sporadic (less than 10%) permafrost. In red: Kuujjuarapik.
H. AHLENIUS/UNEP/GRID-ARENDAL
H. AHLENIUS/UNEP/GRID-ARENDAL
Share
Share
If all the carbon trapped in the permafrost were released, it could have a dramatic effect on global warming.

Permafrost accounts for 25% of the landmass in the northern hemisphere, an area the size of Canada. It is the largest terrestrial carbon reservoir on the planet, exceeding known global fossil fuel reserves (oil, gas, and coal). "Since the last glacial period, 1700 billion tons of carbon of plant origin have accumulated there," Dominé explains. "That's twice the carbon in our atmosphere!" The danger is that the rise in atmospheric temperatures causes the permafrost to warm up, and even thaw in places. "Between 1992 and 2010, Nunavik recorded a 2°C increase in ground temperature at a depth of 4 meters," says Michel Allard, a researcher from Quebec at the Takuvik laboratory and a participant in the APT project. And when it thaws, permafrost releases carbon dioxide (CO2) and methane, two potent greenhouse gases, into the atmosphere.

"If all the carbon trapped in the permafrost were released, it could have a dramatic effect on global warming," says Dominé. The scientist believes temperatures could rise by as much as 5 to 8°C by 2100, compared with the 4°C forecast by the Intergovernmental Panel on Climate Change (IPCC)2 in its worst-case scenario, which does not take into account these complex, recently discovered processes.

"We must urgently include permafrost in climate models," Dominé insists. "To do this, we need to know precisely how its temperature regime changes according to external conditions (such as air temperature, wind speed, and type of soil) as well as—and this is not so well known—the characteristics of the snow cover that lies above it and insulates it in winter." A second crucial area of research involves understanding and modeling the release of greenhouse gases into the atmosphere. "All we know today is that we are up against a potentially powerful positive feedback loop," adds Dominé. "The higher the air temperature, the more the permafrost thaws, and the greater the amount of greenhouse gases in the atmosphere, which in turn causes a new rise in air temperature, and so on." 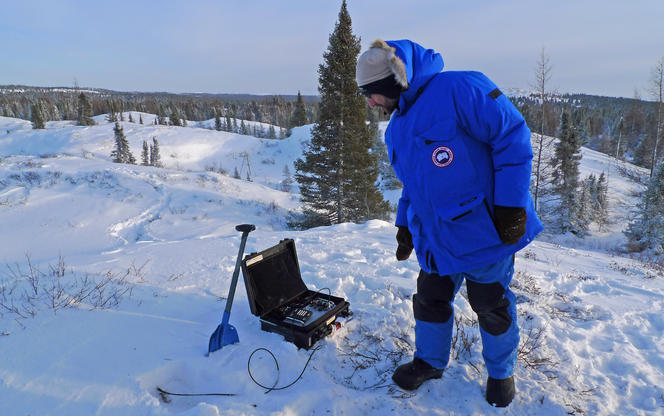 Florent Dominé, a researcher at the Takuvik laboratory, measures snow cover a few kilometers from Kuujjuarapik. 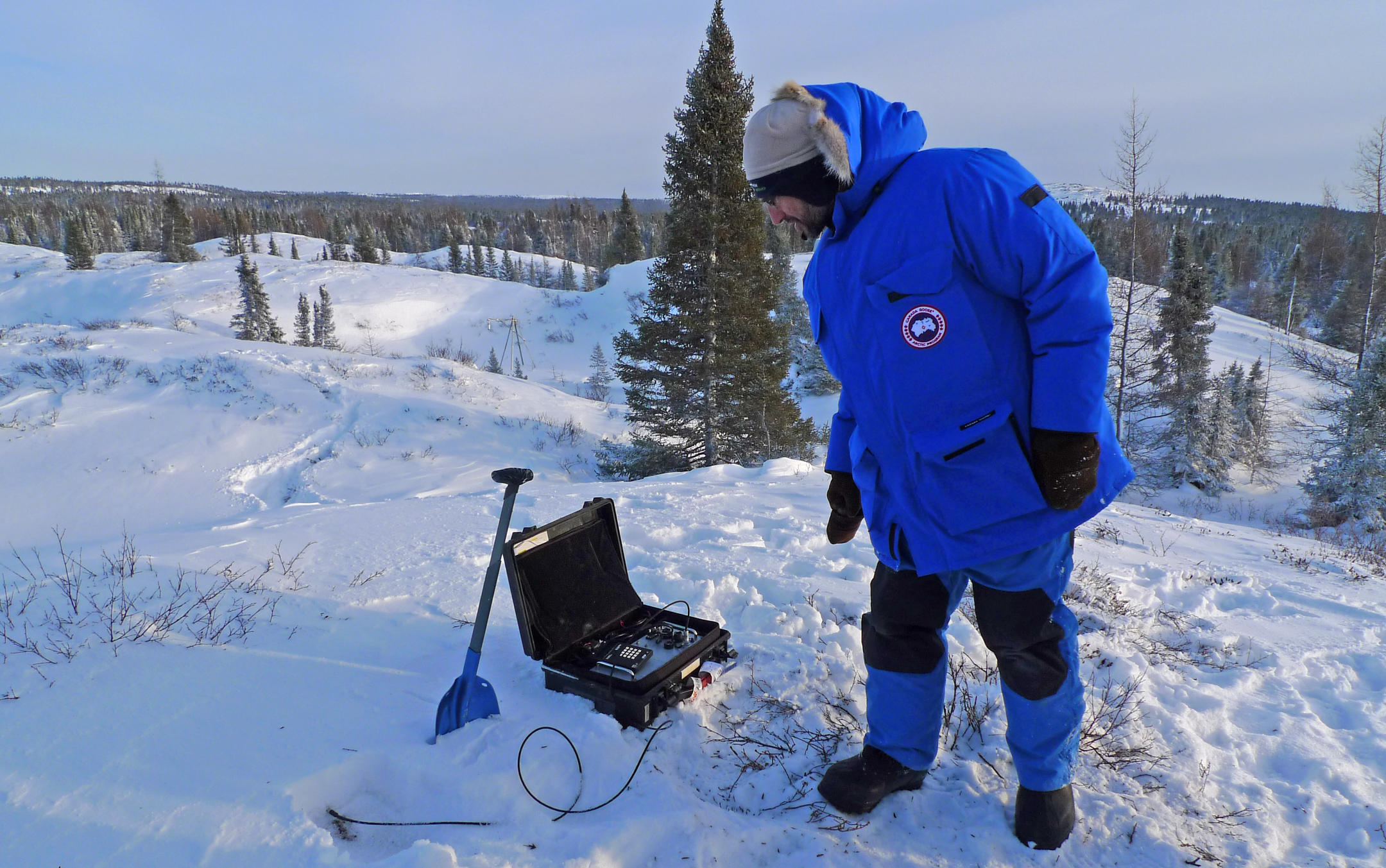 Three sites have been selected to carry out this three-year study: Bylot Island, the northernmost location (latitude 73°N), within an area of continuous permafrost and a landscape of grassy tundra; Umiujaq (56°N), a coastal village in a region of discontinuous permafrost with alternating boreal forest and shrub tundra; and Kuujjuarapik, the southernmost site (55°N) and our destination, characterized by sporadic permafrost, largely covered by boreal forest with conifers.

The following day, the blizzard has given way to bright sunshine. We fly over Hudson Bay, where the first ripples of sea ice are just becoming visible, and come in to land at Kuujjuarapik. No time to take a break in the village: we immediately board a helicopter, which will take us to the permafrost mounds located a few kilometers away. And the helicopter is no luxury: there are simply no roads in the Arctic. From the air we get our first view of palsas, peat mounds swollen by ice, and of thermokarst ponds, created by thawing permafrost, lined up in what looks like an array of pots of white paint. In fact, these mounds are the only remnants of the permafrost that once existed at Kuujjuarapik—of which 90% thawed over the past few decades. We land on one of them and unload the equipment. The thermometer reads -23°C. By the time we have prepared the instruments, the cameras and smartphones have stopped working. A "low battery temperature" message pops up on the screens, preventing any further action. 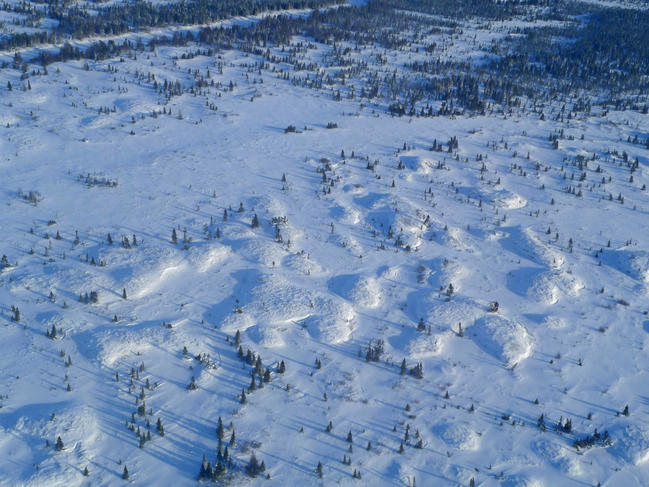 Permafrost mounds, also called palsas, are typical of the region. 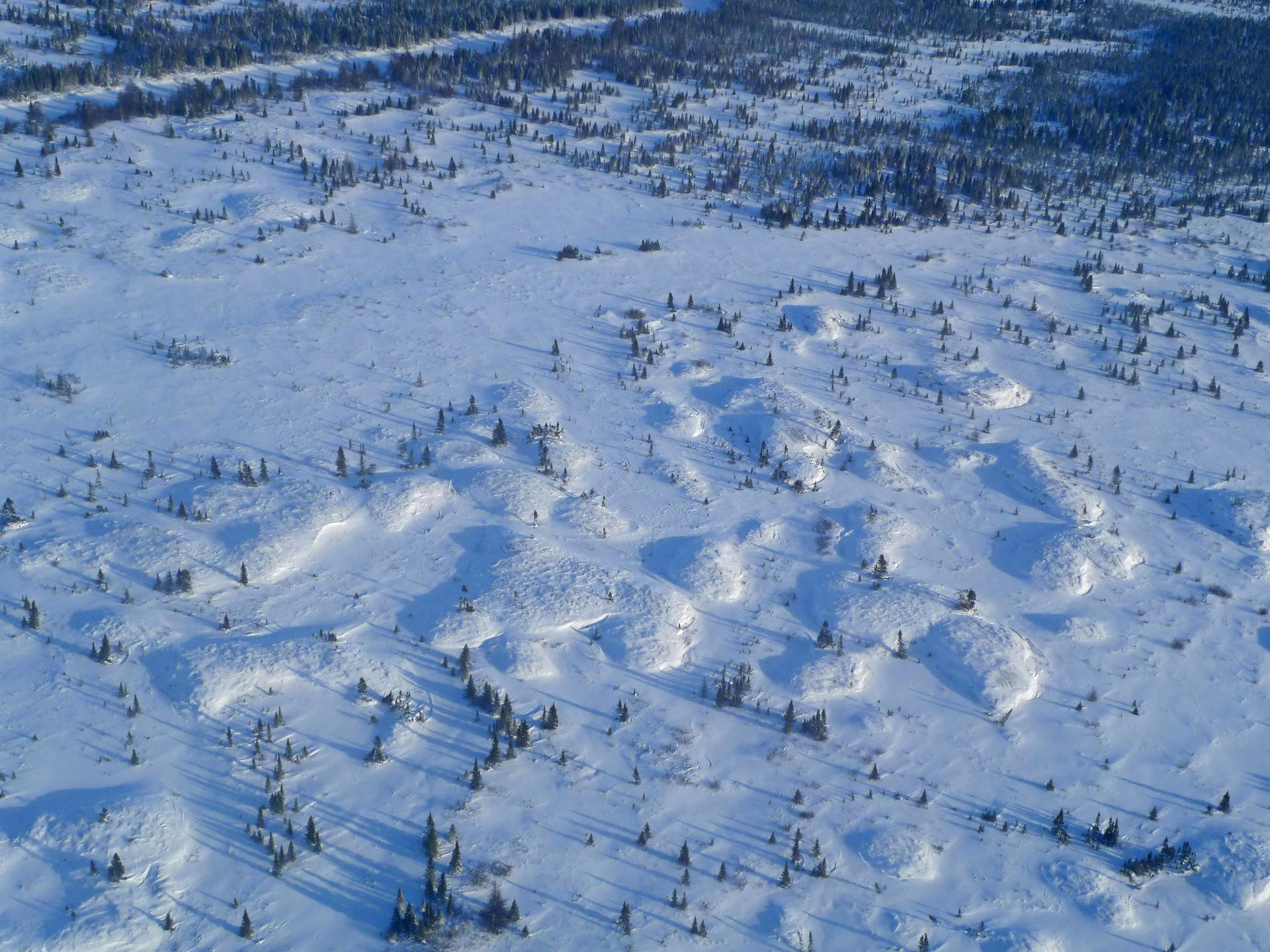 Wrapped up warm in his goose-down jacket, a woollen hat pulled down over his ears, Dominé is in his element. "Snow is a very good insulator, almost as effective as polystyrene or a good quilted jacket," he explains. "In winter, it acts as a buffer between the permafrost and the outside air, preventing the ground from cooling as much as the air. However, its insulating properties vary according to its thickness, density, and structure. A very thick layer of snow provides greater protection than a thinner layer, while low-density snow is a better shield against the cold than compact snow." Dominé pulls out his snow probe: the layer is a mere 12 centimeters deep at the top of the palsa. He then sticks a temperature probe into the snow. At the interface with the permafrost, the temperature reaches -9°C, which is 15°C warmer than the air temperature. Using a small shovel of known capacity (100 cm3), he gathers up some snow, weighs it on a scale pulled out of his instrument bag, and works out its density. "It's still fairly light," he observes. The demonstration is repeated at the foot of the palsa, where the snow is considerably thicker, reaching a depth of 80 centimeters. The temperature of the permafrost where it comes into contact with the snow is -1°C, which means it is actually on the verge of melting!

In winter, snow acts as a buffer between the permafrost and the outside air, preventing the ground from cooling as much as the air.

There is a reason for his demonstration: with climate change, not only do air temperatures rise but precipitation (rain and snow) also increases as a result of greater evaporation. "It's counter-intuitive: everyone in the Arctic can see that there are fewer days of snow," Dominé points out. "Yet when snow does fall, it does so in much larger amounts than it used to and tends to become deeper, causing the permafrost to warm up." Another factor to take into account for understanding the effects of the snow cover is vegetation. With rising air temperatures, plant cover expands while trees and bushes migrate northwards. And more vegetation means deeper snow. "Windblown snow tends to accumulate in the presence of vegetation, especially under trees," Dominé explains. 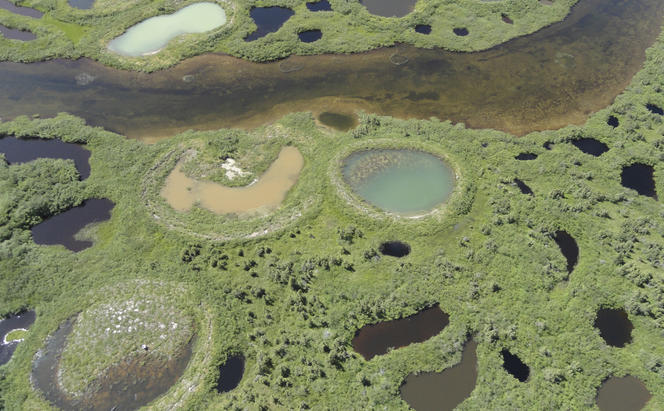 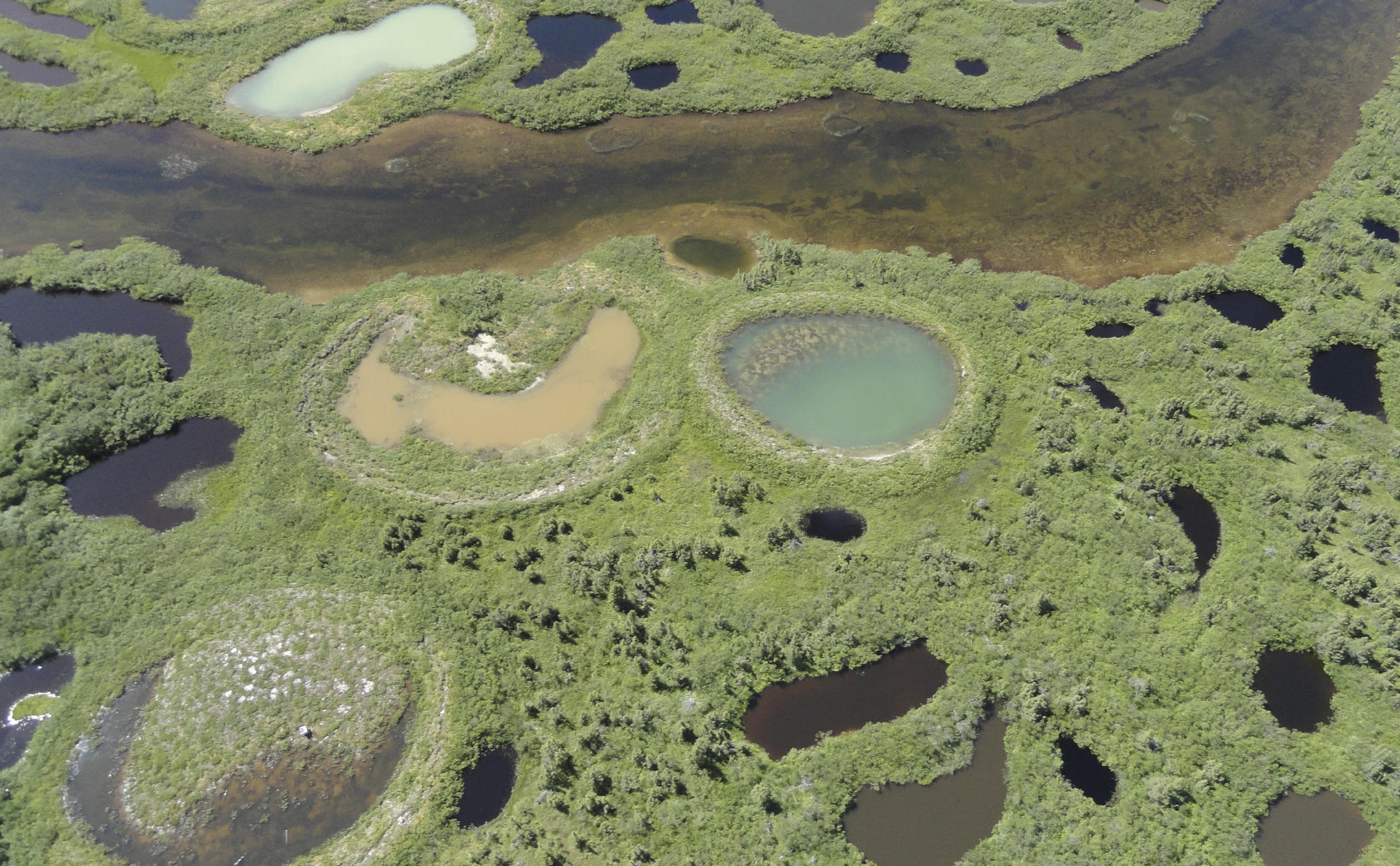 The key role of thermokarst ponds

The helicopter has returned, ready to take us back to the village. Night will be falling soon, and we sadly won't have time to land by the thermokarst ponds. Already frozen over this time of the year, the ponds, which act just like bioreactors, are key to the release process of frozen carbon. When the permafrost thaws, pieces of soil break off and fall into the water, providing nutrients and carbon to the bacteria and plankton living in the pond. The latter break them down into CO2 in the water layers near the surface, and into methane (CH4) at the oxygen-deprived bottom of the pond. "Researchers have analyzed the methane released from these ponds in various places in the Arctic," says Warwick Vincent, the scientific director of the Centre for Northern Studies, which runs the research stations at Bylot Island, Umiujaq, and Kuujjuarapik. "In some of them, the carbon dates back to more than 40,000 years! This means that it is the old carbon stored in the permafrost that is being released into the atmosphere. And it's not good news for the planet."

This means it is the old carbon stored in the permafrost.

In any case, modeling gas emissions will be no mean feat. "There are millions of similar ponds in the Arctic, representing a total area of more than 200, 000 km2,” Vincent reckons. Surprisingly, these thaw ponds have not always played a negative role: 15,000 years ago, in the first few thousand years that followed the end of the last glacial period, they probably helped warm our still icy atmosphere before gradually filling in. 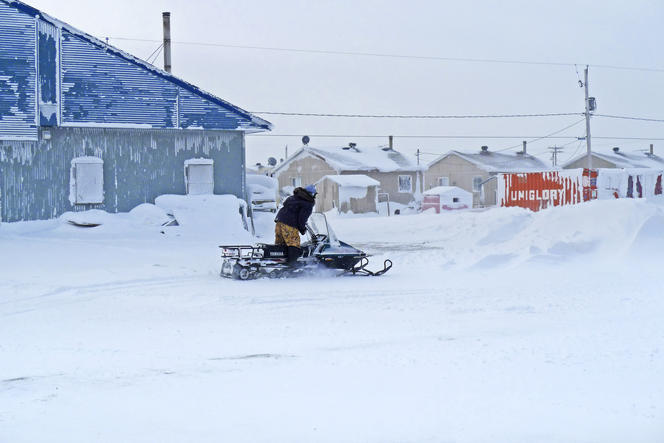 In Kuujjuarapik in the winter months, snowmobiles have replaced traditional Inuit dog sleds. 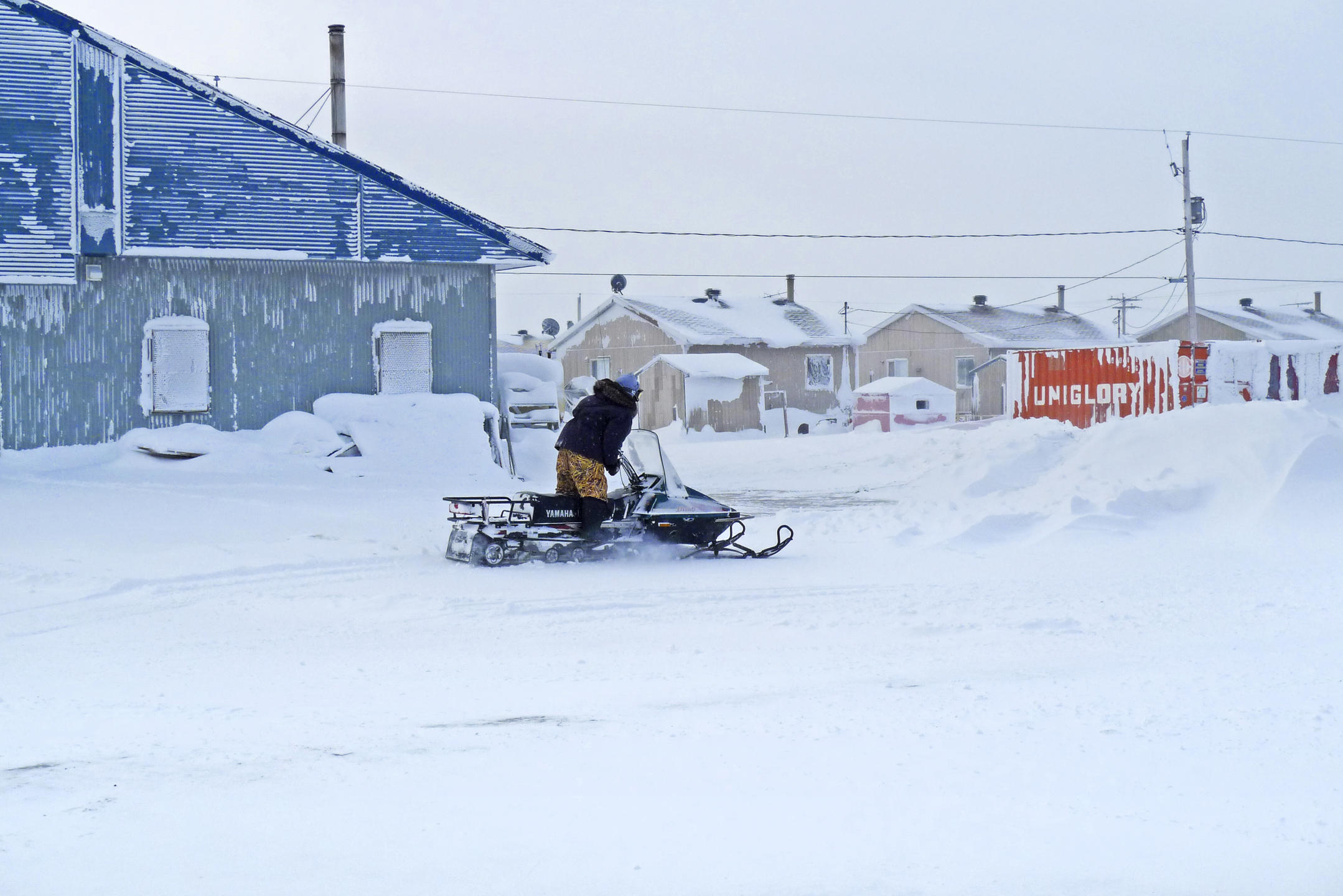 Back in Kuujjuarapik, where we're due to spend the night at the Centre for Northern Studies after a freezing afternoon out in the snow, a yet more chilling piece of news awaits: a polar bear was spotted the night before in the middle of the village, and the children are not allowed out until further notice. "When I was a kid, back in the 1950s, these things never used to happen," says Alec Tuckatuck, an Inuit hunter met at the Centre. This is yet another effect of climate change in the Arctic: as their natural habitat, the sea ice, shrinks and becomes weaker, polar bears have taken to moving along the shores and entering villages in search of food. The next day, Kuujjuarapik is again in the throes of a blizzard. It will be some time before we are able to leave for Montreal. Meanwhile, the polar bear has been shot by hunters.

Article
Françoise Gaill, the voice of the oceans
climatology

Slideshow
A Year in Antarctica
permafrost