Home / Articles / When Earth was a Snowball

When Earth was a Snowball

Home / Articles / When Earth was a Snowball

When Earth was a Snowball

Artist's impression of Snowball Earth 720 million years ago.
MIKKEL JUUL JENSEN/SPL/COSMOS
Share
Share
The Earth hasn't always been the blue, hospitable planet it is today. On at least three occasions our planet was completely covered with ice. How did the Earth get into this state and, above all, how did it manage to get out of it?

In the course of its history Earth has experienced periods so cold that its surface was entirely covered with ice. Long questioned, these so-called "Snowball Earth" episodes are today attested by considerable geological and geochemical evidence. Since the 2000s, climatologist Gilles Ramstein1 has been investigating these events, in which the Earth seen from space would have resembled the icy moons Europa and Enceladus. He tells CNRS News about these icy spells that impacted our planet.

The Earth is located in the habitable zone of its star, which normally means that water can exist in a liquid state there. In that case, how could the planet have completely iced over?
Gilles Ramstein:2 It's not as simple as that! When the Earth first formed, 4.56 billion years ago, the Sun radiated 30% less energy than it does today. Ever since then, its power has increased by 7% every billion years. The paradox is that, although the Earth received less radiation then, it was much warmer than it is today. This phenomenon is due to the fact that a planet's climate depends on its radiation budget, which is the difference between the energy received from the Sun and that returned to space from the land, ocean and atmosphere. From the very beginning, Earth's atmosphere has behaved like a heating blanket. More specifically, carbon dioxide and methane, which are powerful greenhouse gases with highly variable atmospheric concentrations, underpin regulation of surface temperatures. 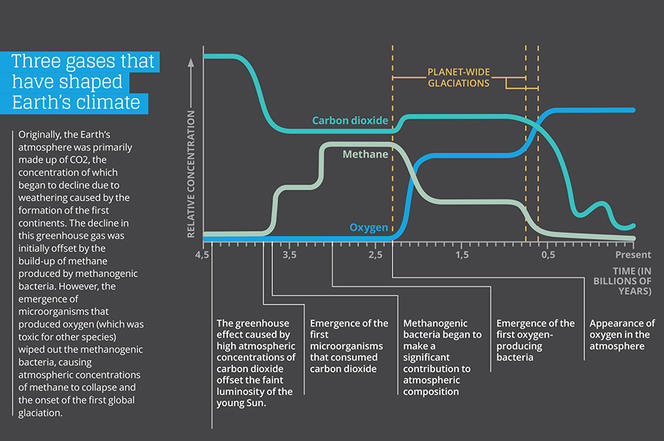 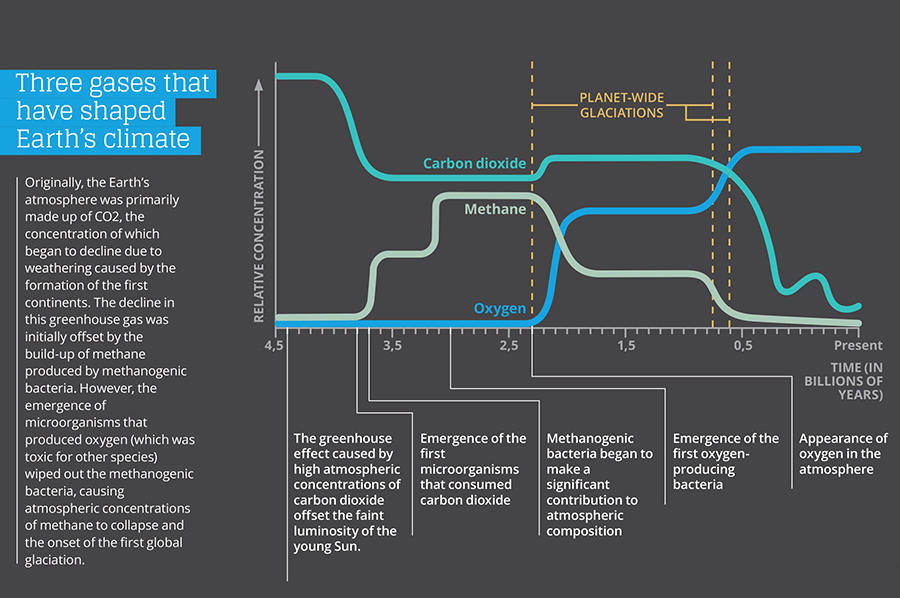 From the very beginning, Earth's atmosphere has behaved like a heating blanket.

The climate is thus a balance between sources of greenhouse gases and sinks that remove them from the atmosphere. On our planet, the main natural source of CO2 is volcanic activity, while its principal sink depends on the weathering of continental silicate rocks caused by water runoff. When CO2 reacts with the rock it is removed from the atmosphere and sequestered as carbonate, which accumulates as underwater sediment. Over 3 billion years ago, volcanism was already in full swing, although the total area of the continents was still limited and erosion was negligible. As a result, the atmospheric concentration of CO2 was very high. In addition, the same period saw the emergence, 3.5 billion years ago, of methanogenic archaea. The metabolism of these unicellular microorganisms produces methane, whose greenhouse effect is thirty times greater than CO2.

The build-up of these two gases—carbon dioxide and methane—in Earth's early atmosphere explains why our planet was so warm in its youth.

So how did this result in glaciation?
G. R.: This climate disaster was caused by a biological revolution! It is important to understand that for the first two billion years of its existence, our planet remained anoxic: oxygen gas was only present in trace amounts and was a violent poison for the anaerobic life forms that flourished at the time, especially methanogenic archaea. However, a global increase in oxygen concentrations took place 2.4 billion years ago: this is known as the Great Oxygenation Event (GOE). This phenomenon was probably caused by the emergence of cyanobacteria, i.e. microorganisms with a novel metabolism, called photosynthesis, of which oxygen is a waste product. As the latter built up, it wiped out most of the methanogenic archaea that inhabited the early ocean, bringing methane production to an end. In addition, the methane present in the atmosphere reacted with the oxygen, forming CO2, a much less powerful greenhouse gas. This resulted in major cooling, magnified by the increase in albedo—the ability of the Earth's surface to reflect solar radiation back into space—caused by the formation of ice. This process then spiralled out of control until the Earth almost completely froze over. This episode, which lasted around 300 million years, is called the Huronian glaciation. 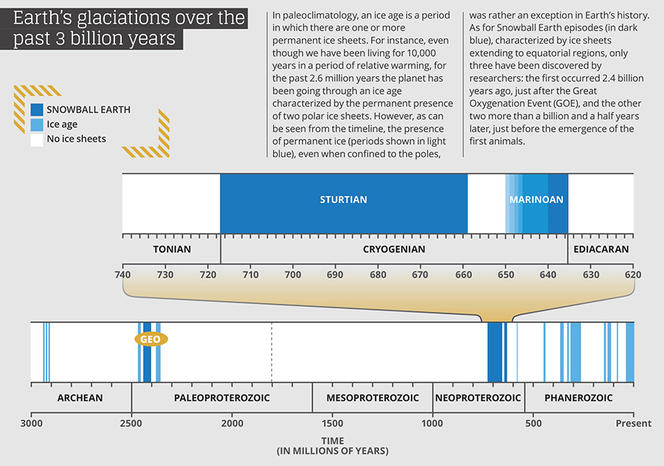 Earth's glaciations over the past 3 billion years. 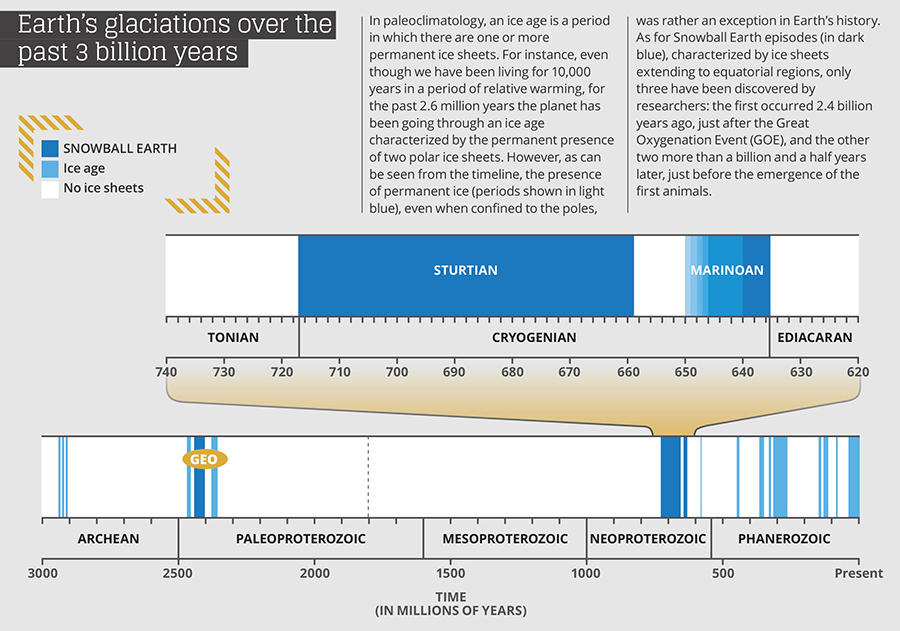 750 million years ago, the atmospheric concentration of greenhouse gases fell to such an extent that the Earth's mean temperature dropped by around 50 °C.

And yet, 700 million years ago solar luminosity was 94% of its current value, so surely the Earth should have been spared this! In fact, this time it was the CO2 engine that failed. The Rodinia supercontinent—which had formed 500 million years earlier—began to break up along the tropical belt (see map) 800 million years ago. These tectonic processes were accompanied by massive volcanic eruptions that covered vast regions with basalt.

This major event was associated with the opening of oceans and seaways, generating new sources of atmospheric moisture near the continents. This led to increased precipitation and runoff on the continents and, therefore, to greater erosion of continental rocks. Since recently formed basalt rocks weather six to eight times faster than granite, much of the CO2 disappeared into this sink. 750 million years ago, the atmospheric concentration of greenhouse gases fell to such an extent that the Earth's mean temperature dropped by around 50 °C. As a result, the polar ice sheets extended as far as the equator. 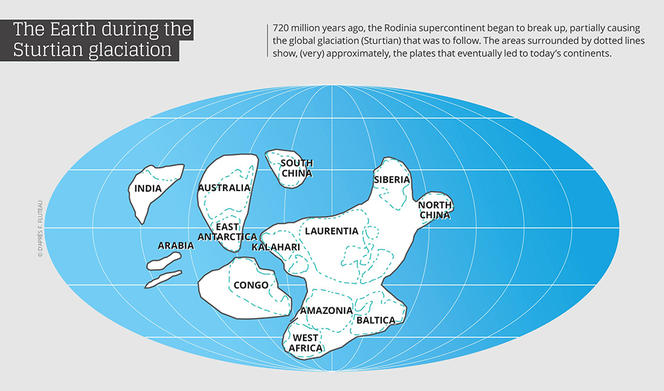 The Earth during the Sturtian glaciation. 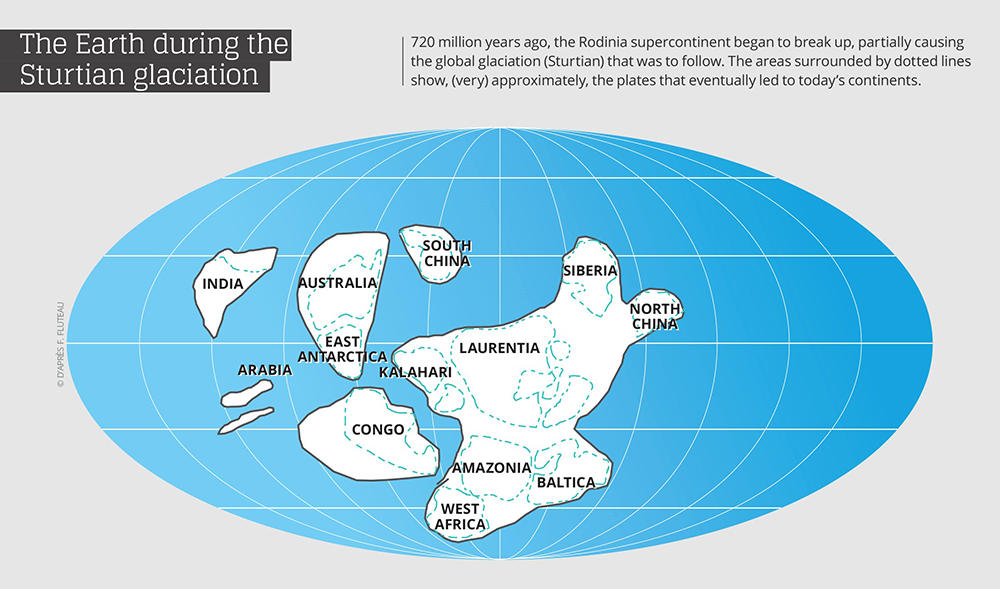 How did the Earth manage to escape from such Snowball Earth episodes of runaway global glaciation?
G. R.: Snowball Earth episodes were periods of major imbalance that were in fact extremely unstable. Their existence was first postulated in the 1960s by the British geologist Walter Brian Harland, who observed traces of glaciation in rocks that, 700 million years ago, were located in tropical and equatorial areas. Since these regions are, by definition, the warmest on the planet, the entire Earth would have been covered in ice.

The last few billion years of Earth's history may well be lifeless, due to lack of water and photosynthesis.

At the time, nobody believed him, as the albedo of an ice-covered Earth is so high that in order for it to emerge from a global glaciation, the Sun's luminosity would have needed to be 1.5 times greater. Then, in the 1990s, scientists realized that it was not the Sun that put an end to Snowball Earth episodes, but CO2.

Although covered in ice, the Earth continued to experience high volcanic activity. So what happened is that, for millions of years, the CO2 emitted by volcanoes built up in the atmosphere. This eventually caused a super-greenhouse effect that outdid that of the ice- and snow-albedo, leading to a sudden meltdown. 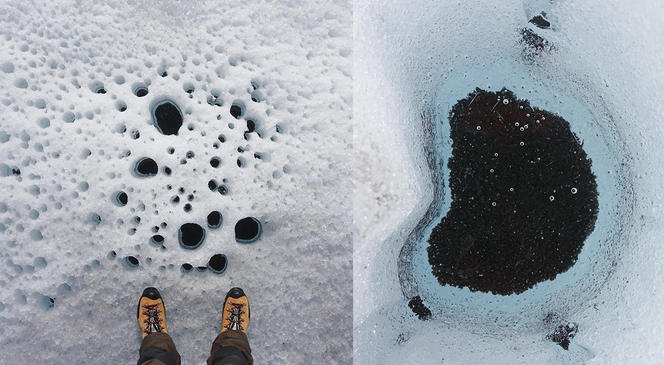 These cryoconite holes photographed on a glacier in Greenland today are similar to those in which life took refuge during past glaciations. 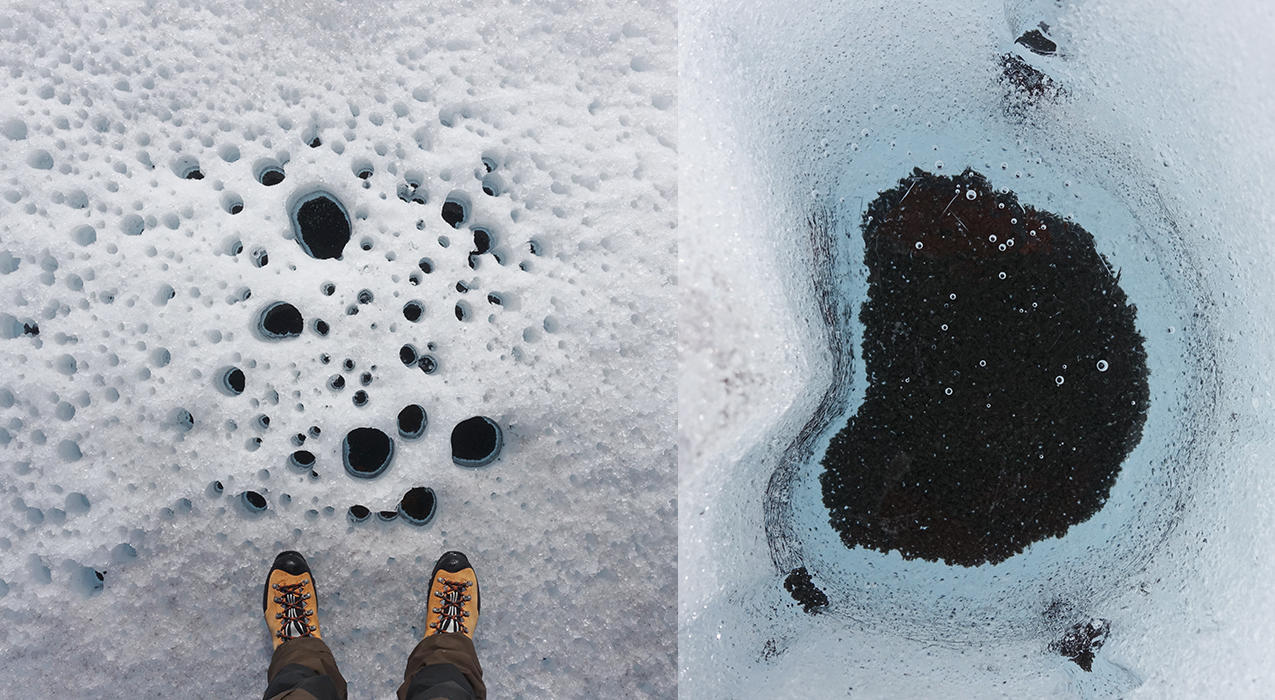 These cryoconite holes photographed on a glacier in Greenland today are similar to those in which life took refuge during past glaciations.
Joseph COOK
Joseph COOK
Share
Share
What about life in all this? How was it able to survive such extreme episodes?

G. R.: If the Earth had completely frozen, any life surviving in the oceans should have suffocated. At the LSCE, we were able to show that our planet was not completely ice-covered, thanks in particular to hot vents and volcanoes. Life may have been able to take refuge in water-filled holes in the ice known as cryoconite holes. This was sufficient to allow exchanges between the atmosphere and the ocean and enable life to survive until deglaciation. Although the Earth has known mass extinctions, it has remained highly conducive to life for the last 4 billion years. All in all, it has experienced remarkable climate stability throughout its history. Global glaciation episodes represent only a fraction of it. However, climate conditions will not always be favorable to life: as the Sun becomes warmer and warmer, it will eventually evolve into a red giant. The last few billion years of Earth's history may well be lifeless, due to lack of water and photosynthesis. Just as on Venus, life will have been unable to adapt—but it will have been present on Earth for a very long time. And that's good news for all those who are looking for it elsewhere. In the Solar System, we are today exploring worlds such as Europa and Enceladus, icy moons that are reminiscent of the distant past of our own planet.

Video
In Botswana, an amazing stream in the desert
climatology

Article
Dust, Blowing in the Winds of Climate Change